Australia-based Aurora Expeditions’ new flagship, the 77-cabin Greg Mortimer, launched in late 2019. The ship, designed for Arctic and Antarctic sailings, can carry a maximum of 126 passengers, twice the capacity of Aurora’s previous craft, the Polar Pioneer, which was retired last year.

Named after the explorer who founded the company and was the first Australian to summit Everest, the Greg Mortimer is the first cruise ship designed with an Ulstein X-Bow, a feature in use by commercial vessels since 2005. Its beak-like front slices through rough water like a hot knife through butter. Combined with the ship’s Rolls-Royce stabilizers, traveling through the Drake Passage and other turbulent waters is a whole new ballgame.

“She has no slamming effect,” said Oleg Klaptenko, the ship’s captain, referring to the harsh and potentially dangerous result of a ship’s bow lifted by large swells only to slam into the sea surface as if hitting concrete.

The Greg Mortimer has been in the news recently, as it was among the ships with Covid-19-infected passengers seeking a port from which to disembark; I was introduced to the vessel weeks prior when Aurora invited me aboard for the ship’s third departure overall and the first for its South Georgia and Antarctic Odyssey sailing, which included the peninsula, South Georgia, the Shetland Islands and the Falklands. 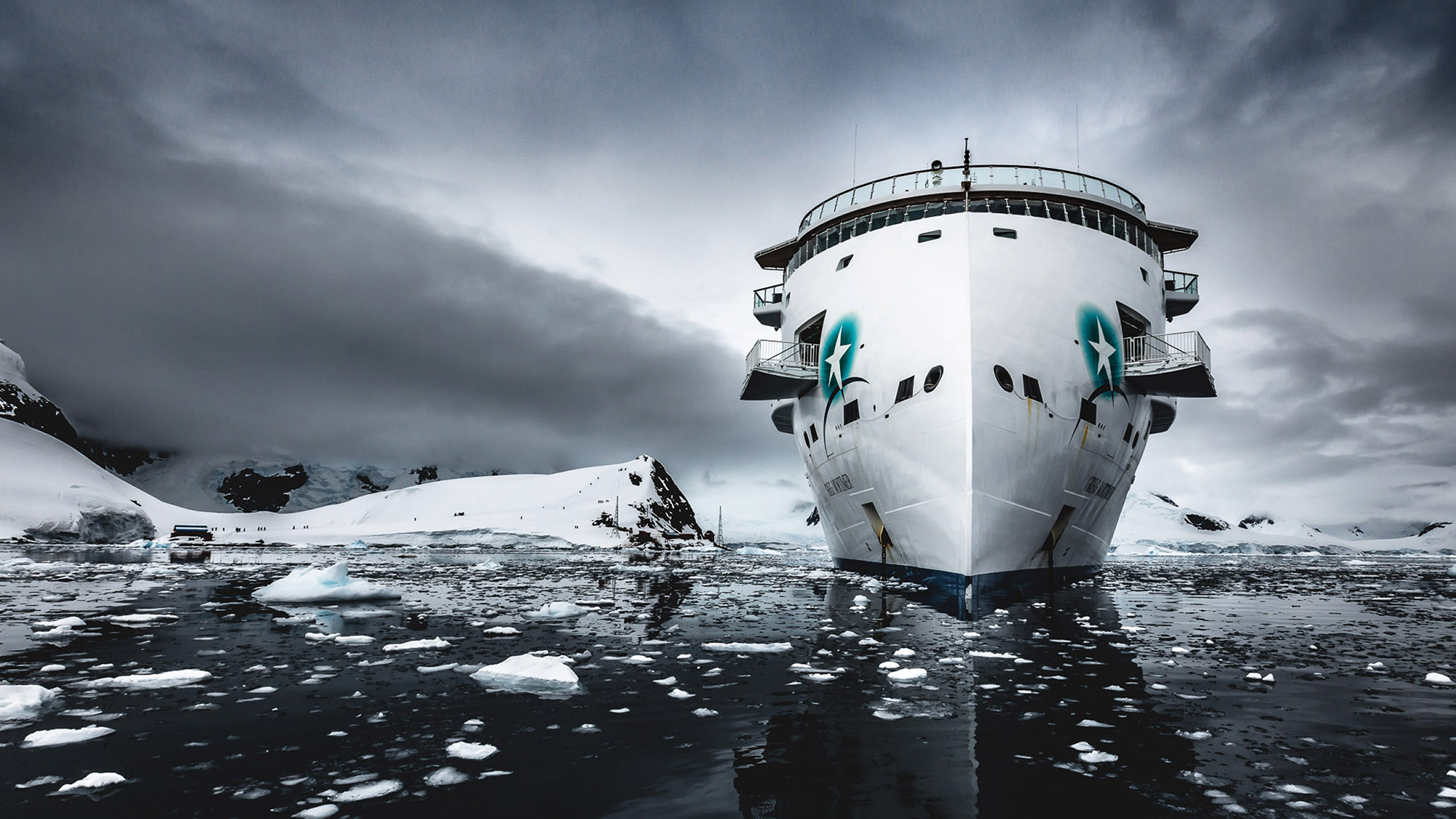 On our first day sailing the Drake Passage, I became seasick. However, according to fellow passengers who’d been on previous Drake voyages, our experience was significantly more comfortable than others.

Not only does the X-Bow result in more fluid movement, but its effectiveness in high seas is also a sustainability game changer. Older ships must slow down to keep the slamming effect at a minimum. Minus that obstacle, the captain was able to maintain speed.

“We had against us strong wind and big waves — some were 8 meters, 9 meters,” Klaptenko said, adding that while most ships facing waves of that size would average 5 or 6 mph, “we ranged between 8 and 10 [knots].”

Faster speeds, in turn, lead to improved fuel efficiency and an 80% reduction in emissions compared with older vessels, according to Aurora.

Other nods to ecofriendly cruising include the use of virtual anchoring. According to Aurora, “a combination of GPS, steering technology, propellers and thrusters” enables the ship to hold position for short periods; for example, when passengers are unloading from a Zodiac in choppy seas. The technology eliminates the need to lower the anchor and disturb the seafloor. Onboard desalination converts saltwater to fresh drinking water, limiting the amount of water carried during sea crossings. 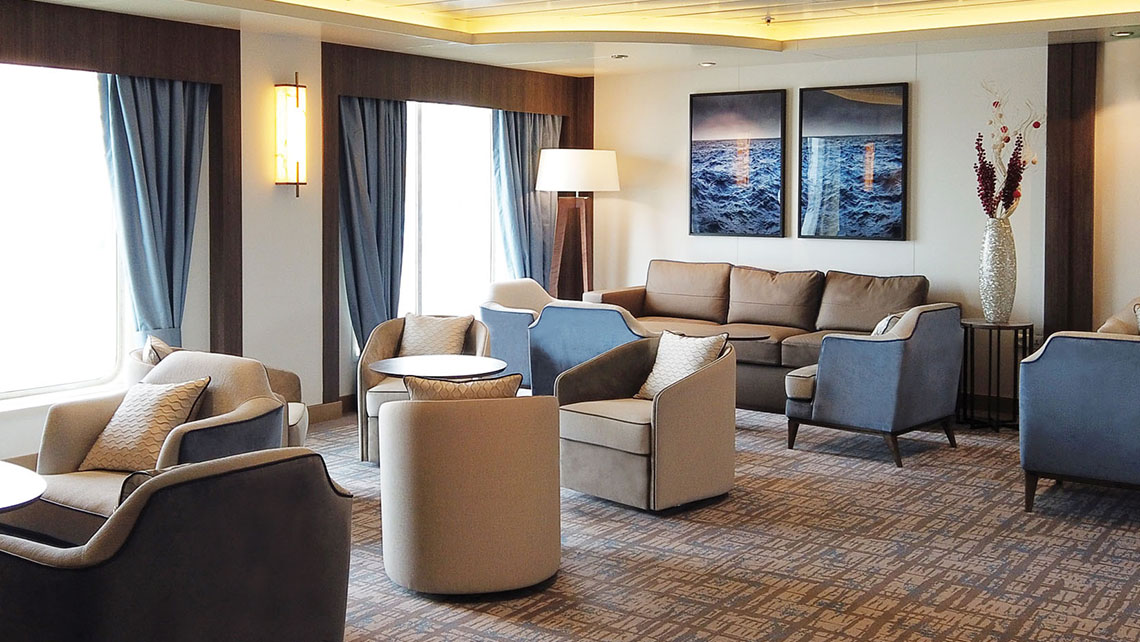 The eight-deck, 312-foot Greg Mortimer cuts an unconventional yet elegant profile. The indoor and outdoor observation areas are spacious and plentiful. A roomy lounge with outside access on Deck 7 features panoramic, floor-to-ceiling windows, ideal for watching surreal Antarctic landscapes glide by. The sleek, centrally located Elephant Island Bar is a guest favorite.

Two hydraulic viewing platforms on either side of the ship grant unobstructed sightlines front to back when weather conditions allow.

My cabin on Deck 6 was bright and airy, with a private balcony. A large photo of king penguins on a sun-drenched South Georgia Island hung behind my king-size bed, an inspiring image to wake up to before morning landings. Other features included a 42-inch TV, bathroom with a passenger-controlled heated floor, minibar, safe and ample storage.

The staff was experienced and friendly and guided our frequent Zodiac tours and landings with aplomb.

Passengers who opted for sea kayaking (an add-on activity arranged before departure) disembarked from their own launch platform. Snorkeling, camping, scuba diving, ski and snowboard touring, snow shoeing, mountaineering, ice climbing and alpine trekking and rock climbing are available for an additional fee on Antarctic departures. 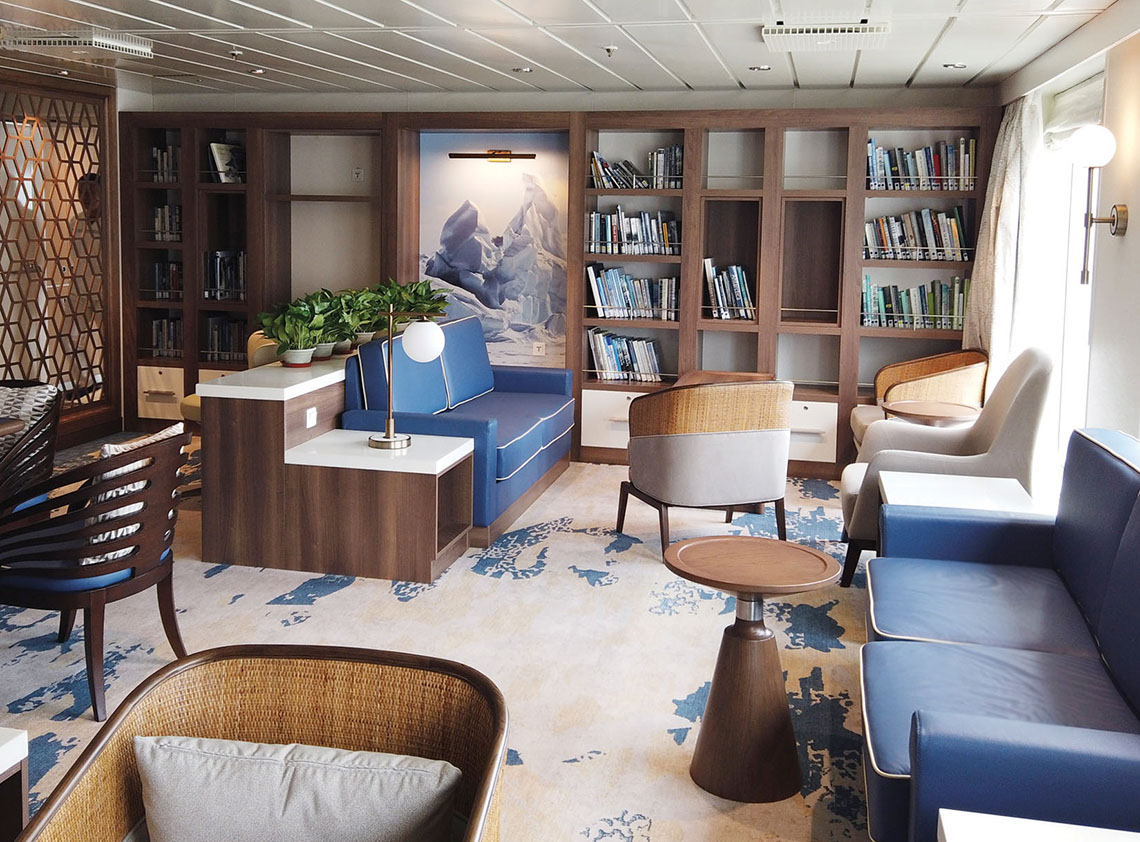 Educational programming filled our days at sea with an impressive mix of culture, history, wildlife and geology. Liz Pope, a microbiologist and veteran expedition guide/leader for Aurora, delivered an engaging presentation called “Ice is Nice” on icebergs, from “bergy bits” to giant “tabular” formations, and how they’re formed. Former BBC wildlife filmmaker Ian McCarthy provided fascinating behind-the-scenes tales of filming in the wild, some about locations we visited. I especially enjoyed the lectures on Ernest Shackleton and his ill-fated Antarctic expedition, as told by historian Nina Gallo, a gifted storyteller.

Australian photographer Richard I’Anson was onboard as a guest expert and provided guidance for capturing the landscapes and wildlife we encountered.

During the trip, as one might expect, the combination of a new vessel with twice the capacity and some staff sailing on it for the first time resulted in a few bumps in the road. Communication with passengers was inconsistent, audio-visual systems were temperamental and televisions were overly complicated. But staff and crew were quick to adjust.

On the way from the Falklands to Argentina, we battled waves as high as 27 feet, a record for the ship at the time, and we felt it. As Klaptenko explained, in a storm, “a small ship in a big ocean is going to move.” Still, meals were served successfully, and we all understood that on another vessel, it could’ve been much worse.