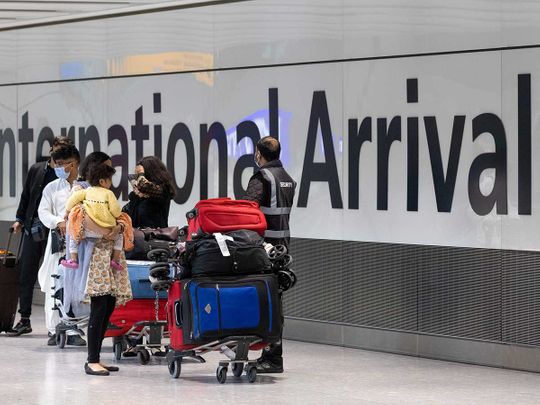 A month ago, hotel manager Hugo Goncalves was gearing up for a bustling summer with almost all rooms at the Tivoli Marina de Vilamoura Resort in the Algarve fully booked.

Goncalves hired new staff and stocked up the bar and kitchen to be ready for an influx of visitors, particularly British travelers, after a disastrous 2020. That was before Portugal was abruptly taken off the U.K.’s green list of countries, meaning those returning would need to quarantine, and the country started to look like a hotspot for the highly contagious delta strain of the coronavirus.

Then the Portuguese government imposed travel restrictions on Lisbon residents during weekends, making it harder for locals to travel to the warmer beaches “- and hotels such as the Tivoli Marina “- in southern Portugal.

“Four weeks ago, we had more than 90% of our rooms booked but now it’s just over 30%,”said Goncalves. “I don’t understand how Portugal stopped being safe from one day to the next.”

Just as the northern hemisphere summer season kicks off and the European Union’s COVID-19 travel certificates become available, Portugal’s path back to normality “- along with the rest of the region’s “- is at risk of being upended by the delta strain.

There’s a race to administer vaccines and limit the fast-spreading mutation, with countries trying to avoid the prospect of a summer with only light restrictions escaping their grasp. While some governments desperately want to put out the “Open for Business”sign, there was agloomy assessment this week from the EU’s disease prevention agency.

It said a fast relaxation of restrictions could cause a “significant increase in daily cases, hospitalizations, and deaths.” Right now, Europe isn’t seeing that, and the number of new cases has plunged, but pressure on governments to relax measures, along with complacency, could set back the virus battle.

The issue has already put countries at loggerheads over travel policies as leaders fret about complacency and that recent progress in the virus fight could be undone. Given tourism’s importance to countries in southern Europe, including Portugal, the disagreement is yet another manifestation of the north-south divide that’s long plagued the EU.

Germany’s Angela Merkel and France’s Emmanuel Macron have been critical of countries such as Greece for freely accepting visitors inoculated with non-EU approved Chinese and Russian vaccines.

“The pandemic is not over, as we would have wished,”Merkel said after a summit of EU leaders in Brussels on Friday. “That’s why all we can do is work to keep the infection numbers down and to speed up the pace of vaccination while remaining careful.”

The variant has already taken hold in the U.K., where it accounts for practically all new positive tests, and it’s becoming more prevalent elsewhere. It accounted for 15% of new cases in Germany in the week to June 13, almost double the figure the previous week. In Ireland and parts of Italy, the figure is at least 20%, while Lisbon is above 60%.

In Portugal, the rapidly changing situation has whipsawed businesses, many of which can’t just flick a switch to be open, but must invest time and money. Without the expected tourists, that’s lost spending in a sector that was among the worst hit by the pandemic in 2020.

While the spread of the delta variant across Europe looks inevitable, its full impact depends on how far vaccination programs have progressed when the strain takes hold. In the EU, the rollout has improved hugely after a disastrous start and about 25 million doses are being administered every week. But there’s still a long way to go: About 30% of people are fully inoculated, while less than half have received one dose so far.

The ECDC has said that those who have only received the first shot are more vulnerable to delta compared with other variants, and second shots should be administered in the shortest possible interval.

Chitra Stern, chief executive of Martinhal Resorts in the Algarve and greater Lisbon regions, says her team has stepped up operations cautiously.

“We knew that this year was still going to be difficult,” she said. “I always said that it will be end 2021, early 2022 until COVID-19 is really controlled.”