I was born in Toronto and moved to Ireland as a boy, where I spent some formative years in a planned, Khrushchevian-style satellite town in south County Clare. Settlers arrived in waves from Belfast, London, New York or further afield – from cities throughout Chile and South Africa. In this multicultural outpost, populated by residential tourists, we became wry observers of traditional nuances. For me, Ireland’s political, historical and cultural landscapes were first properly discovered in the country’s literature. The greats, such as Wilde, Yeats and Joyce, offered signposts to the past while more contemporary writers, including Roddy Doyle, Flann O’Brien and Jamie O’Neill, shone a light on lesser-heard Irish voices. And so my selection of novels echoes Ireland’s literary journey from pre-famine to the present day.

The Silent People by Walter Macken 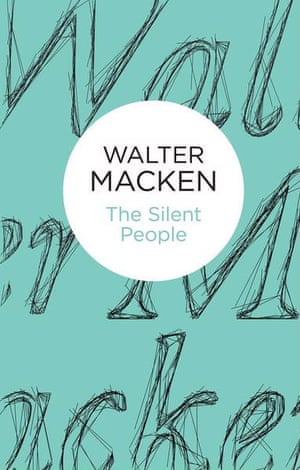 “The famine funerals, then, the women wailing, their thin screeching piercing the sky”

The second novel in Walter Macken’s sweeping trilogy was published in 1962 and captures the harrowing decades in the lead up to the 1847 famine. At the start of the novel Dualta Duane’s life changes for the worse after a chance encounter with the son of a landowner. It is set in a time when Catholics still bore the scars of the last blight and eked out a bare existence working farms while paying exorbitant rents and tithes to corrupt landlords who relished a violent eviction. Dualta is the voice of these silent people. The sparkling waters of the Atlantic, stone cottages burrowed into the landscape and blue turf smoke keep his spirit alive as he journeys south along Ireland’s west coast to meet “The Liberator” Daniel O’Connell, before Black 1847 devours the county’s population.

Falling For A Dancer by Deirdre Purcell 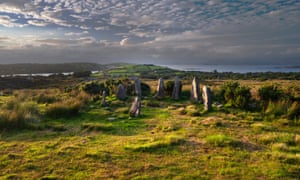 “The day was blue and brilliant, the beating sun making a mockery of the sea of dark clothes worn by the mourners”

Sometimes death can make a cheerful appearance, as is the case in Deirdre Purcell’s 1993 novel about repression and isolation. With the windswept beauty of West Cork’s Beara peninsula as a backdrop, the protagonist, Elizabeth Sullivan, falls as hard for the ocean-sculpted landscape as she does for the young dancer – Daniel McCarthy. Despite a loveless marriage and unwanted pregnancy in 1930s Ireland – when most unmarried mothers were shipped to the Magdalene Laundries – happiness is discovered in the mucky paddocks beneath the shadow of a mountain. The novel was written shortly before we got to see the full horror the high walls of the Magdalene Laundries and Industrial Schools had been hiding. 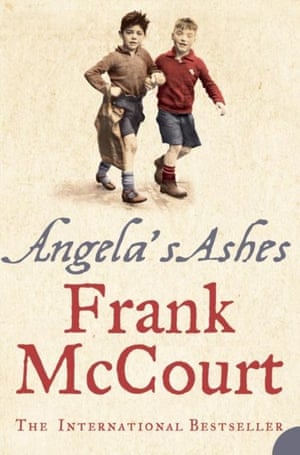 “The rain drove us into the church – our refuge, our strength, our only dry place”

Limerick’s Georgian avenues and compact medieval quarter have finally emerged from the cloudy streetscape of Frank McCourt’s poverty stricken 1930s childhood to become a vibrant destination. This moving memoir and tribute to his mother, Angela, published in 1996, laid bare his bid for survival in tenement conditions on the fringes of Limerick’s society, and earned him a Pulitzer prize. Unknown to the young McCourt, across town future Hollywood legend Richard Harris and Terry Wogan were growing up in different circumstances, without the rainy-day backstory of death, near starvation and destitution. Head to O’Connell Avenue to South’s Bar and see where Frank’s father drank away their family’s meagre earnings.

The Country Girls by Edna O’Brien 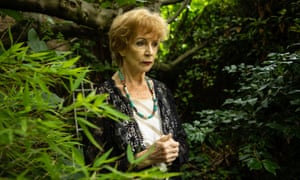 “At the far edge of the lake there was a belt of poplar trees, shutting out the world”

The ground-breaking 1960 novel by County Clare author Edna O’Brien gave a voice to Irish women’s liberation, and the ensuing parochial outrage and censorship on its publication guaranteed its enduring success. This first book in the trilogy traces the lives of young Cait Brady and Baba Brennan, from their drab, cloistered life in County Limerick to the bright lights of Dublin. Scaling the pages were older men, like the predatory Mister Gentleman, who used the country girls’ bid for emancipation to exploit their vulnerability. The book incensed the country’s power houses at the time – church and state – who struggled to grasp the concept that women may want more from life than domestic servitude. 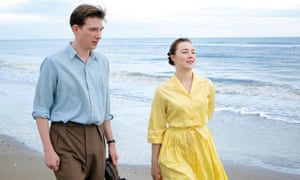 Colm Tóibin’s Costa Award-winning novel, published in 2009, is the story of the immigrant, transformed by the loneliness and freedom of her journey. Eilis Lacey returns home to Ireland in the 1950s and her married life in New York becomes obscured in a haze across the ocean. She adapts to the old familiar pace of life in County Wexford and begins to see handsome Jim Farrell with fresh eyes. However, Brooklyn eventually finds her in the cosy Irish coastal cocoon and she has to make a difficult choice between her two different worlds.

The Green Road by Anne Enright 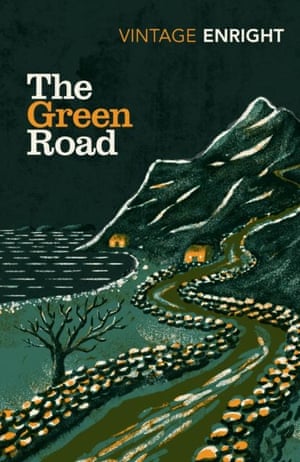 “It was getting dark now, though the afterglow lingered over the western Atlantic; a sky too big for the sun to leave”

Man Booker prize-winner Anne Enright sets her softly lyrical novel at the tail end of Ireland’s Celtic Tiger economy. Rosaleen Madigan is entering her twilight years at her homestead by an old famine (green) road on the Burren Park’s ocean-ridged limestone landscape in County Clare. Rosaleen’s four children return to spend one last Christmas together, and the intricate backstories of their scarred lives unfold in the first half of this 2015 novel. Hanna is an alcoholic in Dublin, Dan is living with his boyfriend in Toronto, Emmet drifts through Mali and Constance stays close to home. Personalities clash over Christmas, before Rosaleen wanders into the darkness to escape the drama. 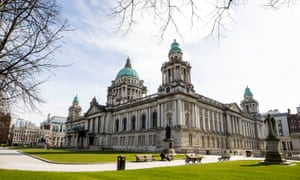 “The colour of the streets always seemed drained and muted as if the colours, too, had been blown away”

Two tales of the same city sharply conveyed by unlikely working-class friends: one a toughly veneered Catholic, the other a capitalist Protestant. The Belfast setting for this novel, published in 1996, straddles the months before and after the 1994 IRA ceasefire. The often-humorous take on the slowly retreating shadow of the troubles graphically depicts the violence of a fractured Belfast, as the protagonists try to normalise their lives in the chaos and prejudice. One chapter lulls the reader into a soft, harmonious take on the city and it’s followed by another, which blows apart the setting with the bombing of a sandwich shop. The two friends’ tangled lives are told in fast-paced prose and peppered with satire, a foreshadowing of the author’s future role at Charlie Hebdo.

The Spinning Heart by Donal Ryan 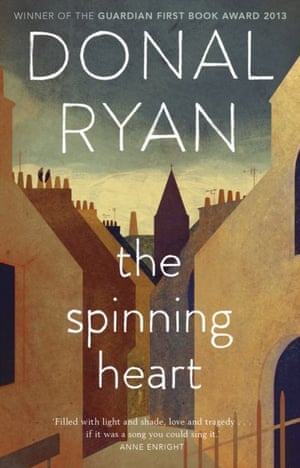 “Things you were sure you’d have in the future turn out to be on the far side of a big, dark mountain”

Donal Ryan spins a Booker-prize longlisted yarn set in the lush Tipperary countryside, a place where looming hillsides and wide lakes block escape paths to mental and physical liberty. Mourning mother Bridie sits with her back to the River Shannon to block neighbouring County Clare where her child died, while Vasya concedes that he will drown if he tries to swim across Lough Derg. They are just two of 21 desolate voices marooned by circumstance in his novel, published in 2012. It’s set at a time when Ireland was haunted by ghost estates and zombie hotels as reckless bank lending destroyed the Irish economy and normal people were left to rebuild lives from the carnage. 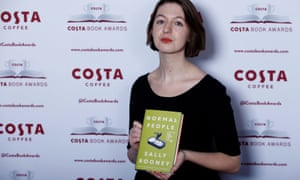 “Dublin is extraordinarily beautiful to her in wet weather, the way grey stone darkens to black”

Published in 2018 and longlisted for a Booker prize in the same year, Sally Rooney’s tale of fractured hearts and minds crosses class structure and Ireland from the west coast to Dublin – and appeared on Barack Obama’s top 19 book list for 2019. It traces the fragile relationship between a popular high-school student, Connell, and marginalised Marianne, through their reversal of fortunes when she becomes Dublin’s Trinity College cool girl and he loses his way in the bigness of life there. The book’s small-screen production dominated ratings and press coverage throughout the Covid-19 lockdown, as did Connell’s short shorts, necklace and prolonged nudity. Onscreen, Tobercurry and Streedagh Strand in Sligo played the novel’s fictional town of Carricklea.

The Sea by John Banville 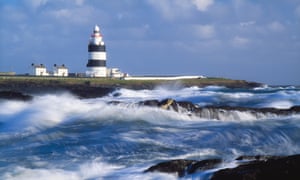 “Henceforth I would have to address things as they are, not as I might imagine them, for this was a new version of reality”

John Banville’s 2005 Man Booker prize-winning novel depicts art historian, Max Morden, as a man all at sea, trying to navigate his way through the turbulence of loss and sorrow. He returns to County Wexford, where he spent summer holidays as a child. You can almost taste the salty air and feel the gentle breeze burn tender skin as the prose ebbs and flows between the past and the present, in this timeless, meditative, disquieting masterpiece.