I spent several years wandering round Russia with books in my rucksack. And several more years reviewing Russian fiction and finding myself transported back, whether to a village with chickens pecking through orchards round a wooden church or to a drunken kitchen table debate in a high-rise overlooking the Moscow suburbs. This subjective list of engaging, relatively readable novels and novellas recreates various Russian landscapes, eras and atmospheres, often in ways that no amount of travelling could. As Ludmila Ulitskaya writes in The Big Green Tent: “Military historians have found many discrepancies in Tolstoy’s description of the Battle of Borodino, but the whole world imagines the event just as Tolstoy described it in War and Peace.” 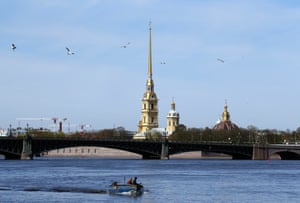 Happiness is Possible by Oleg Zaionchkovsky

Moscow exerts a strong gravitational force on writers, just as it does on Chekhov’s three sisters with their refrain, “To Moscow, to Moscow…” One of the subtlest evocations of modern Moscow is Oleg Zaionchkovsky’s Happiness is Possible, a series of darkly comic vignettes published in 2012. The narrator is a struggling novelist whose ambitious wife has left him. Discursive, fatalistic and fond of sleeping in the day, he is reminiscent of Ivan Goncharov’s sluggish hero Oblomov, Russian literature’s traditional “superfluous man”. What his story lacks in plot, it amply repays in dishevelled charm and style. He shuffles, unshaven, through the dacha village of Vaskovo and fills the abandoned apartment with dog hair and ashtrays. Zaionchkovsky’s narrator conveys the city’s magnetic pull, finding a secret solace and reassurance in the deafening noise: “We are Muscovites, children of the metro; time and again we seek refuge in its maternal womb.”
• Translated by Andrew Bromfield, And Other Stories

The Underground by Hamid Ismailov 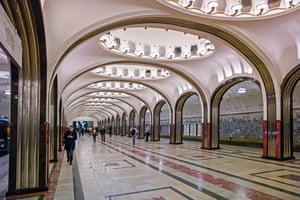 The palatial metro system is one of the best things about Moscow. Several novels take place in its tunnels, including Mikhail Glukhovsky’s dystopian Metro 2033, first in a series of philosophical, post-apocalyptic underground adventures. Hamid Ismailov’s The Underground uses metro stations to structure the posthumous reminiscences of young Kirill. Born nine months after the 1980 Olympics to a Siberian mother and an African father, Kirill dies soon after the collapse of the USSR a decade later. There are recurrent images of the metro as a body, with “stone intestines” or marble pillars like a woman’s legs, “bare to the hip”. Exiled Uzbek author Hamid Ismailov has woven this poignant story, a fictionalised memoir inspired by episodes from his and his family’s own peripatetic lives, into a haunting landscape-tapestry of 20th-century Moscow.
• Translated by Carol Ermakova, Restless Books

He Lover of Death by Boris Akunin

Boris Akunin, whose real name is Grigory Chkhartishvili, is famous for his bestselling series of clever, tsarist-era thrillers. If you haven’t read any, start with The Winter Queen, which introduces the brilliantly understated detective work of diplomat-turned-sleuth Erast Fandorin. In He Lover of Death, Oliver Twist meets Treasure Island as we follow the adventures of orphaned urchin Senka through 19th-century Moscow. Akunin recreates the slums of Khitrovka, full of spiced tea stalls and gangsters in shiny boots (today the area is all banks and top-end restaurants, of course). Senka finds a hoard of antique silver bars, hires a student to teach him how to be a gentleman and is soon at the theatre, marvelling that people will pay “seven roubles to sit in a prickly collar for three hours” and watch “men in tight underpants jumping about”. The tale’s gruesome denouement has a characteristic blend of action, deduction, intrigue and morality.
• Translated by Andrew Bromfield, Orion 2010 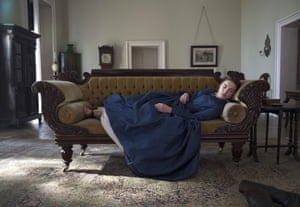 Florence Pugh played the title role in an unflinching 2016 film version of this brutal 19th-century novella, a tale of provincial lust and murder. If people have heard of Nikolai Leskov at all, it’s usually because of Lady Macbeth. Dostoevsky first published it in his literary magazine and Shostakovich later turned it into an ill-fated opera. From the bored merchant’s wife, romping with a newly arrived farmhand under moonlit apple blossom, to a chilling denouement near the “dark, gape-jawed waves” of the leaden Volga, the story showcases Leskov’s restless evocation of place and passion. The setting, with its buckwheat kasha and icon lamps, has bureaucratic warrants and certificates alongside folkloric elements: the locked-up tower of the merchant’s house and the wife’s lover, “like a bright falcon”.
• In The Enchanted Wanderer and other stories, translated by Pevear and Volokhonsky, Vintage

One hundred years after the 1917 revolution, a gem cutter called Krylov falls in love in a Russian city where centenary celebrations lead to repeated cycles of violence. Meanwhile, gem prospectors or “rock hounds” search for precious stones in the mythical Riphean mountains (inspired by Slavnikova’s native Urals). This winner of the 2006 Russian Booker Prize is a genre-defying mashup of speculative fiction, magic realism, romance and thriller. Among many prescient interwoven threads are an ecological catastrophe triggered by human greed, and an epidemic of nostalgia, sparking civil war. In St Petersburg, costumed revolutionary sailors try to fire a museum tank gun at the Winter Palace and in Moscow the toppled monument to murderous security chief Felix Dzerzhinsky is resurrected (this bit almost came true recently). There’s an evocative Russianness in the novel’s linguistic subtlety, the fantastical mountain gorges, the cavalcades on city streets and the pervasive, Kafkaesque sense of strangeness.
• Translated by Marian Schwartz, Overlook Duckworth 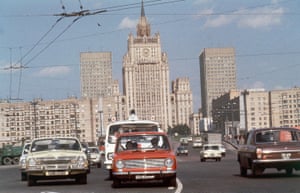 A war-wounded teacher arrives at a 1950s Moscow school and forms a Dead Poets Society-style club, where he leads the boys through the city streets, peeling back the layers of its literary and historical palimpsest. One dilapidated house, where two of the boys later lose their virginity, provides a physical metaphor for Moscow’s strata: “Its walls had been covered in silk, then in empire wallpaper, … in crude oil paint, … then layers of newsprint…” Ulitskaya is always redolent and readable. The interlocking stories in The Big Green Tent revolve around two groups of school friends. This generous novel, spanning four decades of Soviet life, has a Tolstoyan ambition to capture the spirit of an age. Beyond the deftly drawn settings (trams, ice skating, Karelian birchwood furniture) is a powerful sense of cultural baggage. “We live not in nature, but in history,” Ulitskaya writes, as her protagonists walk down a lane once trodden by Pushkin and later Pasternak, “skirting the eternal puddles.”
• Translated by Polly Ganon, Picador

The Mountain and The Wall by Alisa Ganieva

The Russian authorities are planning to build a wall to isolate the troublesome Caucasus from the rest of the country. That’s the rumour that drives Alisa Ganieva’s 2012 novel, set in a dystopian-yet-real version of her hometown of Makhachkala, Dagestan’s coastal capital city. Shamil, a young Dagestani reporter, wanders the streets while his girlfriend, Madina, dons a hijab and heads for the hills to marry a murderous zealot. It’s another prophetic narrative and Ganieva’s picture of the social and psychological fallout of apocalyptic events feels a bit near the knuckle in 2020. A few years ago, I joined a press trip to Makhachkala to see a new art exhibition and take a trip (with armed escort) into the waterfall-braided mountains. Dagestan is not really a holiday destination, even when there’s no pandemic, and a novel about Islamic radicalisation isn’t likely to encourage tourists. But Ganieva skilfully uses words from some of the 30-odd local languages and fragments of poems, fables, dreams and diaries to evoke this diverse republic sandwiched between war-torn Chechnya and the Caspian Sea.
• Translated by Carol Apollonio, Deep Vellum 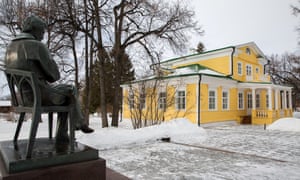 Boris Alikhanov, an alcoholic, unpublished author, finds work as a summer guide in the Pushkin Hills museum, as Dovlatov himself once did. The atmosphere of Russia’s old towns and zapovedniki (nature/heritage reserves) is conjured up in this novel, set on Alexander Pushkin’s old family estate. It’s not just the physical details that resonate (log houses girdled by birch trees, linden-shaded boulevards, old ladies selling flowers outside the monastery), but also the absurdly reverential guides and clueless tourists. The comedy of Pushkin Hills coexists with bittersweet meditations on creativity, loss and identity. Alikhanov derides Soviet authors who hanker after folk verses and embroidered towels but, explaining to his wife why he won’t emigrate, he says that while he “couldn’t care less about birch trees”, he would miss “my language, my people, my crazy country”.
• Translated by Katherine Dovlatov, Alma Classics

The Women of Lazarus by Marina Stepnova

From a bomb-making scientist in a secret city called Ensk to starving, smoking teenage ballet dancers filling each other’s pointe shoes with ground glass, The Women of Lazarus flirts with Russia’s enduring cliches even as it constructs a profound and richly sensory tale about human interaction. The chapters trace a series of related family stories through a century of Soviet and post-Soviet joys and tragedies. It opens with young Lidochka at the beach, where her mother is about to drown. “Lazarus” is her grandfather, a talented physicist who appeared at Moscow University, dirty and lice-ridden, seven decades earlier. The women include his wife, Galina Petrovna, who looks after orphaned Lidochka, and whose perfume smells of “orange tree honey, raspberry, ambergris, opoponax, and coriander”. Stepnova continually reframes our perspectives, showing us how human beings can adapt to almost anything.
• Translated by Lisa Hayden, World Editions