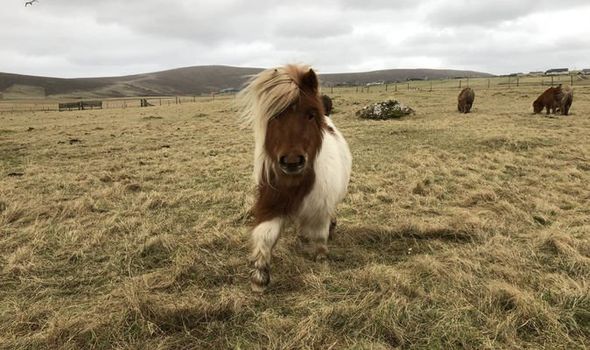 This makes it the northernmost of the inhabited British Isles, and not much further from Bergen, Norway, than it is from Aberdeen. It was February. In fact it was Valentine’s night but I’m not sure my better half fully comprehended the sheer romanticism of the occasion. It was brain-achingly cold. And such a gale was blowing she couldn’t hear me shouting.

I was shouting: “It’s starting to rain.” We had mustered in the boathouse, along with what seemed like most of the island’s population (632 at the last census). And there were the tourist hordes of course. My wife and I. Two German students. That was it. The Leicestershire Vikings don’t count as tourists. More of them later.

And I bet it wasn’t exactly baking then. There were men and women dressed as Christmas trees covered in twinkling lights. Middle-aged schoolchildren in peaked caps. Jesters, jockeys, Union Jack-clad English Johnnies.

It was a Technicolor drunken dream team who promptly trooped outside. They lit their torches, held them aloft in the gale and started marching the half-mile or so down the hill to the foreshore in Uyeasound, where the galley lay ready for burning. At their head were the vikings. This lot weren’t in fancy dress, they were in ceremonial regalia. 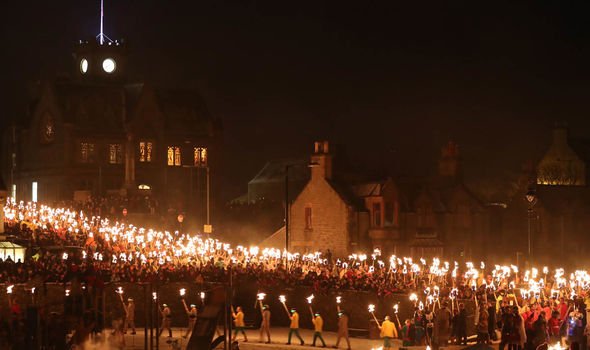 Up Helly Aa (literally Up Holy All) is the name given to any of the now 12 fire festivals running in Shetland since 1876 to mark the end of the Yule season. Each of the groups that make up the procession follow the Jarl’s Squad, the Jarl being the chosen man (and it’s always been a man so far) who leads the festival and chooses the tone of it.

Andrew Hunter, 33, this year’s Jarl, was joined by his grandfather, father and two sons. His shield is the original Unst one from 1911.

Up Helly Aa may only be a century and a half old but the impulse to have a big, burning shindig goes back much further.

The Norse theme to all this – the helmets and the galley – is a Victorian invention. They came up with Up Helly Aa as a safer alternative to the barrel burning festival which came before. Barrels never being in short supply, owing to the herring trade. 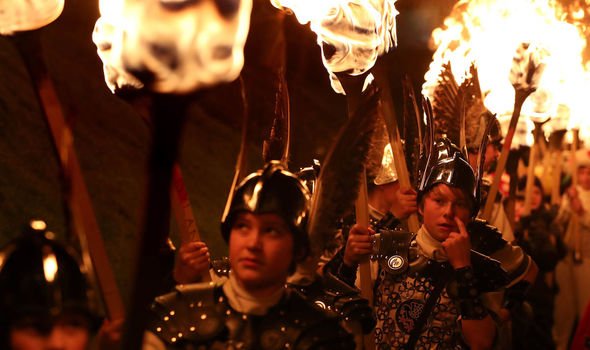 For an example of a barrel festival, try Ottery St Mary in Devon in November, in which burly locals shoulder flaming wooden casks covered in filthy flammable pitch. Sample quote in the pub over cider after the festival: “I’m in trouble with the wife; lad got burnt.”

Up Helly Aa – this “safe” shindig – reaches its climax on the sand. All the hundreds of torches of the procession encircle the galley, an elegant bit of boatbuilding boasting a proud masthead in the shape of a dragon. The torches rain down on to the boat, bright clumsy arrows whose flames blow about in the gale.

Some torches pass right through to the other side but the assembled whisky happy clowns and Christmas trees couldn’t care less.

There is shouting against the wind. Merriment abounds. Primal demands are satisfied. The light and the heat blaze into you. The cold stabs of rain on your cheeks bring tears to your eyes.

In front of us a merry group of four men turn to offer a hip flask. 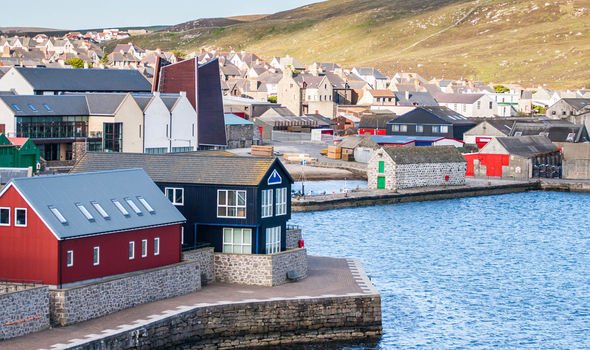 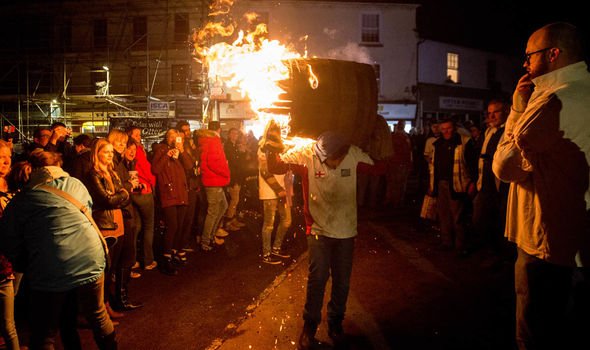 “Tur Langton!” they shout. Some sort of Shetland dialect, no doubt.

But they don’t speak like Shetlanders, these cheery souls. “We are the vikings Oftur Langton,” they chorus. And another hip flask is proffered.

The shorter one explains in a quieter tone: “Tur Langton is our village in Leicestershire. We come every year.”

Jon Gardiner, 61; Christopher Curran, 53; Daniel Mansfield, 69 and George Thomas, 67 – 20 years ago these four fine fellows from the heart of England came for a visit.

George, the tall thin one, had an aunt who owned a croft – an unpowered and run-down one-room cottage.

They came for the festival back when visitors were even rarer. And these ruddy faced men of ale were welcomed with open arms. They return each year, taking turns to put their feet nearest the oil burner on the cold nights in that same cold croft.

“Are you coming to the show?” they asked, in a way which brooked no negative reply.

Show? “We’re one of the star attractions. Come on.”