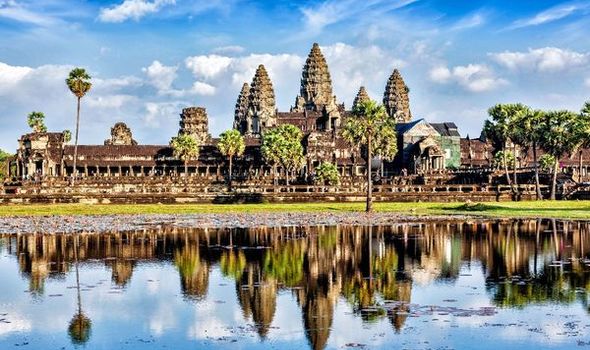 Indeed they did. As he swung around a sharp corner and the forest cleared, we got our first glimpse of the 12th-century stone structure on the outskirts of Siem Reap.

“Bigger things” barely covered it and my wife Debbie and I stared in a reverential silence, trying to take in the scale of the temple-city.

So, some numbers: Angkor Wat, thought to be the world’s largest religious building, is on a 400-acre site, with a 2.2-mile long perimeter wall.

It was built on the orders of the Khmer empire’s ‘god-king’ Suryavarman II between 1112 and 1152, using 300,000 workers and 6,000 elephants, using sandstone and laterite blocks quarried 30 miles away and transported down the Siem Reap River.

Mr C had picked us up from our hotel in Siem Reap, the luxurious and thoroughly excellent French colonial Victoria Angkor Resort & Spa – the hotel cars are vintage Citroens – and first taken us to the Angkor Wat ticket office, which is en route to the Hindu-Buddhist temple (you cannot get entry on the gate. tourism cambodia.com $37 one day, $62 three days). Dropping us by the moat and checking we had plenty of water (absolutely essential, it was a cloyingly muggy 34ºC), Mr C arranged to pick us later to see two more of the area’s temples, part of a 154 square mile UnescoWorld Heritage listed archaeological park.

It is thought approximately 500,000-750,000 people lived in the park at the height of Khmer power, making it the largest city of the pre-industrial world. 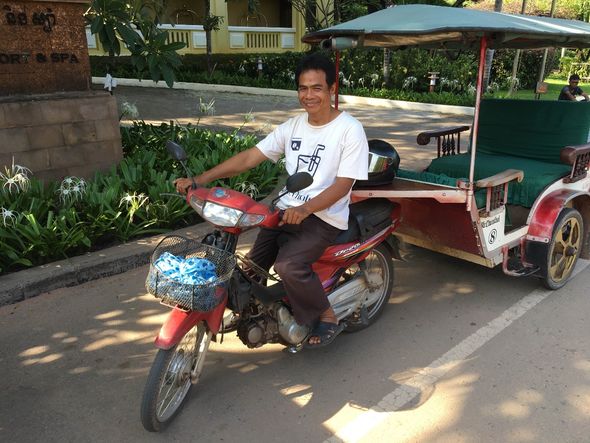 (Mr C, while a driver not a tour guide, still happily shared a lot of superb local knowledge.) Again, we stared in awe at the vast site; of course we’d seen it in photos and on TV but it is only when the human eye sees it that you truly appreciate the colossal scale.

The stone causeway across the moat is being renovated, so we joined the throngs on the floating, temporary, 510ft long replacement, the 6,720 inflated white polybags, making it an amusingly bouncy experience.

Then we stopped and stared in wonder again (there is a lot of stopping and staring in wonder to be done at Angkor Wat) as we got our first proper view of the 770ft-wide entrance porch, before moving on to the central temple complex, reached by a 1,560ft grand avenue fringed by large ponds.

Finally… what must be the world’s grandest of grand entrances, to the temple proper.

And it is here, amid the ancient, black-stained stones awash with intricate carvings, that you truly feel the weight of time; humans have a finite period on earth but you do feel that this worn but defiant (and still functional) magnificence will be here for a thousand years yet, no matter what happens to mankind.

You have to queue for half an hour or so for the absolute high point (in every sense) at Angkor Wat. The 210ft high Bakan Sanctuary is the heart of the complex and the stairs up are dizzyingly steep, befitting the Khmers’ challenging heavenly ascent to see their chosen gods. 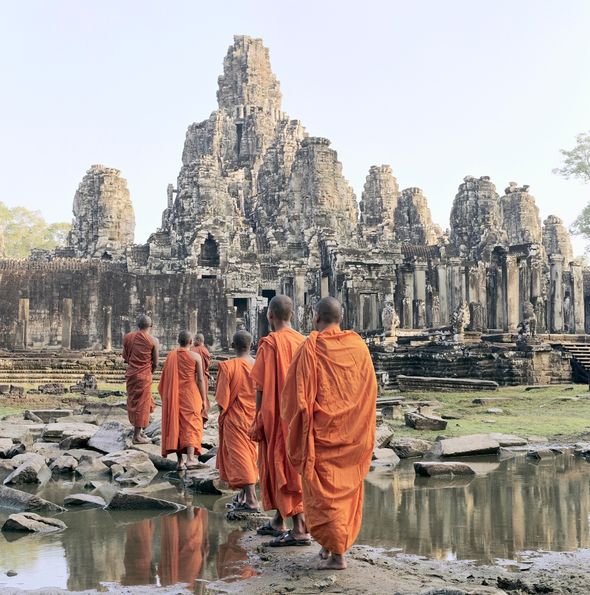 It is all quite magnificent, so make sure you get in the queue for Bakan and do not miss it – this is an exhilarating high point in a place which is, whatever you think about religion, a triumph of the human spirit.

A rich king and an army of labourers helps, of course.

Temples abound in the Angkor area and Mr C also took us to Bayon, which is made up of 216 ingeniously carved stone faces, and Ta Prohm – the temple used as a filming location for the first Angelina Jolie Tomb Raider film – which is being reclaimed by the jungle in quite a startling way, as trees grow right through the stone structures.

The selfie opportunities are stellar at both these atmospheric sites and you will again feel the centuries immersing you… enveloping you.

Siem Reap will be your natural base for any visit to Angkor Wat and it’s a decent spot.

The Victoria Angkor hotel proved to be perfect for us, and our stay was as part of an extension on to a fabulous Lotus Cruises river sailing on the mighty Mekong inVietnam and Cambodia.

Two nights at this delightful, high-quality hotel – I can still picture those happy hour cold beers by the gorgeous pool and our sumptuous suite with a four-poster bed – gave us ample time for the Angkor visit and the city too.

We drifted from deep cultural immersion at the excellent Angkor National Museum (angkornationalmuseum.com, $12) which takes you through the six centuries of the Khmer Empire via so many dazzling artefacts (there’s a good cafe for an alfresco lunch next door) to the less refined 21st century, but dazzling in a different way, charms of Pub Street.

It is what it is: pumping music, garish lights, an Angkor Wat sized moat of booze, food ranging from pizza to Mexican via curry and many, many people milling about.

We had an excellent cheap street food-style Cambodian meal (tangy stir fried Khmer beef is my new favourite thing) on the periphery, declined the raucous milling about bit and retreated to the serenity of the Victoria Angkor.

Both the museum and Pub Street are walkable, though taxis and tuk-tuks are very cheap. We just like walking.

Before flying home, we had a day and night in Phnom Penh, the frantic, traffic thronged Cambodian capital.

Again we lucked out with our accommodation, this time a stay in the Palace Gate Hotel & Resort, directly opposite the magnificent Royal Palace complex, home to the Throne Hall and the mesmerising, opulent Silver Pagoda housing the Emerald Buddha adorned with crystal, gold and 9,584 diamonds and a floor made of 500 silver blocks (cambodiamuseum.info $10). 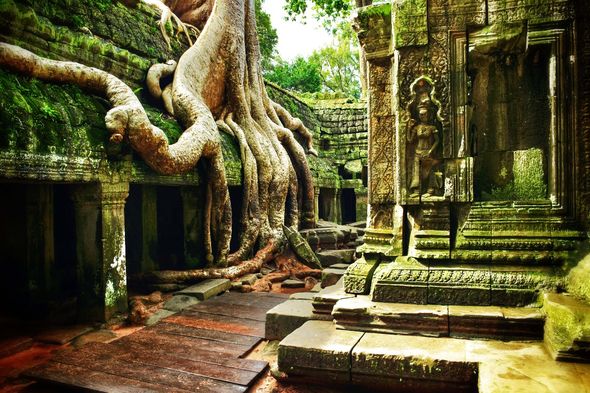 The adjacent National Museum was less frenetic, and, like in Siem Reap, there is a wonderful collection of Khmer artworks (cambodiamuseum.info $5).

(I became mildly obsessed by Phnom Penh’s street-side power lines – an incredible spaghetti of black cables. They have to be seen to be believed!) As in Siem Reap, we succumbed to the temptation of happy hour cold beers by the hotel pool and wandered into town for excellent cheap street eats (boring, I know, but it was tangy Khmer beef again for me).

Returning to the hotel, we also succumbed to the opportunity of a nightcap at the lovely rooftop Orchid Sky Bar, which overlooks the floodlit Royal Palace at night.

Should you do the Instagram thing, this is your place. We would be prepared to suffer this again.

We were really smitten by Cambodia. The country endured the savage Khmer Rouge regime in the 1970s and 80s and is absolutely back on its feet, warmly welcoming visitors.

So, once the coronavirus outbreak is over, go if you can; it’s a terrific, safe, good value and friendly destination and Angkor Wat is worth the journey alone… a marvellous and magical place – you won’t regret it.

Thai Airways flies to Siem Reap and Phnom Penh from Heathrow via Bangkok starting at £579 return in October. (thaiairways.com)

Angkor Air flies from Siem Reap to Phnom Penh in October starting at $74 one way. (angkorair.com)

Rooms at the Victoria Angkor Resort & Spa in Siem Reap start at £82 on room-only. (victoriaangkorhotel.com)

Rooms at the Palace Gate Hotel & Resort, Phnom Penh, start at £92 a night on B&B. (palacegatepp.com)