I can still see the shoes laid out in perfect rows at the entrances to restaurants and tearooms. The line of wooden shops along a narrow, silent lane. A flash of orange and scarlet from the picture windows above tatami mats, looking out on trees in a late October sky. The riddle of streets leading to a huge, white-pebbled courtyard and a grand meditation hall at the far end.

I was stuck in an airport town – Narita – near Tokyo’s main international airport. I was on my way back to my job in New York after a week of business in Hong Kong. The last thing I wanted was an overnight layover in an airport hotel next to a facility that had been the subject of furious debates for years: how dare modern Tokyo, in its rush to modernity, displace farmers and their rice paddies in order to construct a huge terminal with three projected runways miles from the city? But there I was, in the Hotel Nikko Narita, pondering how airport towns – I’d spent far too long near Hounslow and Queens already – are seldom centres of cultural fascination.

I whiled away a bright afternoon watching unfathomable Japanese TV, and then enjoyed dinner downstairs and a fitful, jetlagged sleep. I woke up early, had breakfast – and still had five hours to kill before my flight home. So I took a free shuttle bus into Narita town. I’d never seen Japan before – I was sure I’d never see it again – and the concrete buildings along the busy roads lined with vending machines confirmed my sense that I’d never want to visit a second time. 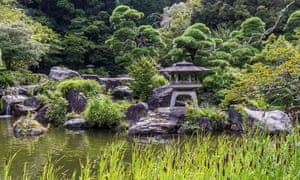 The minivan dropped me off and I crossed a street. Suddenly, I was in a much more intimate quarter: a celebrated pilgrimage site, if only I’d known it, to which people would sometimes walk for 45 miles from central Tokyo to pay their respects. I’d never seen a Japanese Buddhist temple before, and after I came out of the meditation hall, I followed a row of gravestones to the temple garden, where dozens of five-year-olds, in pink or blue caps, were scattering across a lawn collecting fallen leaves. Japan in the early autumn is a miracle of brilliant blue skies and the first pang of coming cold and dark; the fact that nothing lasts, you’re told, is precisely the reason why everything matters, and has to be cherished before it’s gone.

To this day, I couldn’t tell you what it was about that scene, but as I looked out across the garden in the airport town, I thought: I know this place. Better yet, it knows me. If I don’t come back here, something will remain unresolved inside me forever. I have no official connection with this country, but something in me belongs here and if I don’t return, I’ll be an exile for life. By the time I boarded my flight for JFK a few hours later, I’d decided to move to Japan on the basis of a morning in the airport town. Now I’ve been here 32 years. 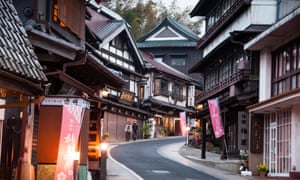 Why do I write all this now? In part because every one of us has a secret home – a place that feels familiar for no reason at all – and some of us are lucky enough to find it in real life, and thus be reminded that the homes we discover may live deeper inside us than simply the homes we inherit, the places where we happen to have been born or reside. Also, because in times of stress – or enforced stillness such as the great layover we’re all experiencing now – we tend to return to such places in our heads, if only to sustain ourselves with images of the place where we can become our truest selves.

I’ve always felt that nowhere is uninteresting to the interested eye; look at your hometown as if you’ve just touched down, for the first time, from Tibet or Ethiopia, and even it has a wonder or two. 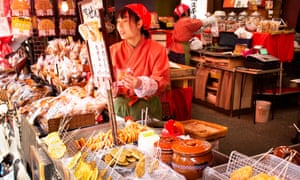 It’s so often the moment that never featured in our plans – the place we were more than happy to avoid – that transforms our lives. I feel lucky indeed to have lived for three decades around the great temples of Kyoto, but they’re seldom as unvisited – or as unexpected – as that temple in Narita. And most of us come to a place like Kyoto (or Paris or Venice) heavy with a sense of anticipation. The fact that I backed into Narita, having barely heard of it before, left more space for me to be uplifted by it.

After all these years I often find myself going back, as a bedridden Proust might have done, to that magical morning in the autumn light. It feels like a consolation, a confirmation, even a personal shrine. And as I grow older, I can taste more and more the exact mix of wistfulness and buoyancy that lit up that October sky, the hush that hung over those thin, unpeopled streets.

In the month before my unwanted layover, I’d visited Chiang Mai for the first time, and the temples of Mandalay. I’d seen the leg-rowers of Inle Lake, in Myanmar’s Shan state, and visited the casinos of Macao. I was more full up with astonishing sights than I’d ever been before. But the airport town became the place that changed my life, and reminded me that you don’t have to go anywhere special or even far to be transported. The everyday, in the right light, can look sublime.

• Pico Iyer’s two new books on Japan, Autumn Light (£14.99) and A Beginner’s Guide to Japan (£8.99), are out in paperback (published by Bloomsbury). Another recent book is The Art of Stillness: Adventures in Going Nowhere. All are available from the Guardian Bookshop