Barely halfway through our first morning in Vienna and my wife, Alexa, has already succumbed to Stendhal syndrome. Named after the 19th-century French author who first described the phenomenon on a visit to Florence, Stendhal syndrome is brought on by over exposure to artworks of sublime beauty. The sufferer presents with heart palpitations, dizzy spells and, in the most severe cases, cardiac arrest. Alexa’s bout, which came on somewhere between Bruegel’s Hunters in the Snow and Giuseppe Arcimboldo’s Water, a surreal portrait composed of fish, in the magnificent Kunsthistorisches Museum, passed without the need for medical attention.

The Austrian novelist and journalist Stefan Zweig wrote that a citizen of Vienna “with no appreciation of art or pleasure in form was unimaginable … You were not truly Viennese without a love for culture.” The locals, you feel, have developed a degree of immunity to the demands the city makes on the sense of the aesthetic. For the visitor, however, the quantity of art and history you may be tempted to consume in a short space of time can be a tad overwhelming. The answer is to take your time.

In Vienna the number of sightseeing opportunities expands to fill the time allotted to visiting them, so there is no point adopting a see-it-all policy. If it is your first visit to the city, limit yourself in the main to the historic centre contained within the grand baroque boulevard known as the Ringstrasse. The old masters and ancient artefacts of the Kunsthistorisches Museum are first on the list. Then, to perk you up after all those 15th-century depictions of the crucifixion, head for the glitteringly erotic Klimt frieze in the nearby Secessionsgebäude. Painted in 1902, Klimt’s frieze is based on Richard Wagner’s interpretation of Beethoven’s Ninth Symphony – headphones are provided. 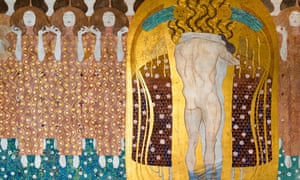 Designed by Joseph Maria Olbrich in 1897, the clean-lined and white-walled Secession House was the manifesto of an artistic movement that rejected the conservative, baroque past and looked to a modernist future. The original white cube, it exhibits outstanding contemporary works. A show entitled Shit Moms, by the Iranian-American artist Tala Madani, was on when I visited. What could be more appropriate in the home of Sigmund Freud?

Dream ticket: the night train from Cologne to Vienna

Vienna is not a city in a hurry. Although an urban scene must exist somewhere, this is no Barcelona or Berlin. Here you can be comfortably middle-aged: you can dress up (even the waiters in the coffee houses are in evening dress), read books, go to the opera, eat endless plates of strudel or Sacher torte and linger over a hot chocolate. Bliss. Indeed, a whole culture has evolved around the coffee houses to encourage a more sedate way of life. For the price of a cup of coffee you buy entrance to a sort of club where you can spend the day reading newspapers (still hung on wooden rods), people watching, gossiping or thinking. I was surprised that no one was talking on the phone or tapping at a laptop or tablet. The coffee houses are a refuge from life’s drudgery.

Some of the more famous, such as the Café Central, are a little too busy with people Instagramming their pastries, but many still retain the elegance, charm and atmosphere for which they are famed. You will find your favourite; the next time I am in town I will head for Café Hawelka and Café Schwarzenberg (which is particularly good for breakfast). With a gemütlich (cosy) coffee house on virtually every street, it is baffling that so many people are in the several branches of Starbucks that have opened in Vienna’s centre. 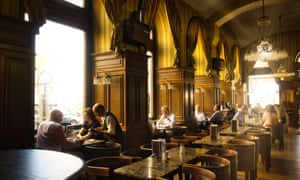 It is the vast baroque and rococo palaces of the lantern-jawed Habsburgs that define Vienna. Again, unless your stay is a long one, an attempt to explore them all in one visit is not advised: there is only so much gold leaf, porcelain, elaborate silverware and large oil paintings of battle scenes a person can take. Do, however, make sure to visit the Sisi Museum in the Hofburg Palace. This was the residence of Empress Elisabeth (known as Sisi), wife of Emperor Franz Joseph, renowned for her great beauty, her eccentric grooming regime (she slept in a mask lined with raw veal or crushed strawberries) and for helping to create the dual monarchy of Austria-Hungary in 1867. Her rooms in the palace include a bizarre gym including wall bars and rings where the empress would work on maintaining her 20in waist.

Vienna’s long history as the heart of European politics and culture means the city is never short of anniversaries – and 2020 is no exception as it marks 250 years since the birth of Beethoven. The composer first arrived in Vienna in 1787 to study under Mozart and stayed for most of the rest of his life until his death in 1827. There are endless events planned. Some are traditional, such as the marvellous production of Fidelio I saw at the Vienna State Opera; and some, like Billy Joel in conversation about his relationship with Beethoven, not so. 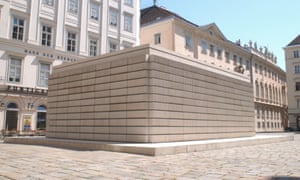 Vienna is a city that needs to be walked with no particular route in mind. Keep the plans vague and allow for happenstance. One afternoon as I was wandering through the backstreets not far from the smart shopping area, the narrow lanes opened up on to a large square. In front of me was Rachel Whiteread’s memorial to the more than 60,000 Viennese Jews who were murdered in the Holocaust. Free of decoration and starkly plain in design, this is one of the most harrowing sculptures I have seen. At one end of Judenplatz, this closed, concrete bunker graphically contrasts with the ornate buildings surrounding it. The walls are made up of library books with spines turned to the wall; these surround heavy, forbidding-looking closed doors that echo the sealed gas chambers of the death camps.

High culture and grand architecture are no defence against the brutality of human nature.

For information on operas, concerts and Beethoven 2020, go to wien.info. To reach Vienna by train from London, take the Eurostar to Brussels, a high-speed train to Cologne and the Nightjet sleeper to Vienna. For more options, see seat61.com.

Looking for a holiday with a difference? Browse Guardian Holidays to see a range of fantastic trips