“The wonderful thing about outdoor swimming is that it looks after everybody,” says Eleanor Kennedy, the chair of the Parliament Hill Lido Users’ Group and – before lockdown – a 7am open-air enthusiast.

“We have young swimmers, families, key workers, retired people, disabled people. You don’t need a huge amount of kit or expensive gym membership, and on a concession rate you can pay a few pounds to swim in a beautiful environment.”

As temperatures soar and with beaches potentially out of bounds, Kennedy believes there is a groundswell of support for reopening the UK’s estimated 130 lidos.

There was dismay and frustration when Boris Johnson failed to include any type of swimming pool in the 4 July lockdown relaxations for England, despite rigorous preparations across the sector.

Swim England has launched a national Open Our Pools campaign and, with no firm dates forthcoming from Scottish or Welsh governments either, those desperate to tone up physically and mentally after weeks confined to home are joining a growing clamour from passionate outdoor swimmers.

Further up Hampstead Heath from Parliament Hill, a group of frustrated bathers last month raised a banner calling on the City of London authorities to “stop drowning in bureaucracy”, as the three famous single-sex and mixed ponds remain shut. 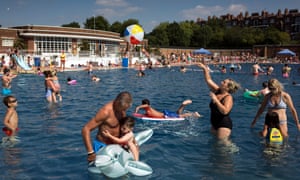 Paul Jeal is senior supervisor across all four Hampstead pools, and says he was shocked when outdoor pools were not included in the forthcoming easing measures, though heath managers are seeking clarification for the three open-water ponds.

“Unauthorised swimming is becoming a real problem,” says Jeal, who has lifeguarded on the heath for 25 years. “We have signs up and tape but with the heat and lack of other facilities it is very difficult.”

While interest in open-water swimming is a relatively new phenomenon, with research for Sport England confirming a surge in people swimming in lochs, lakes, rivers and seas, lidos have long offered a golden mean between the more regimented indoor experience and wilder waters. Devotees describe the exhilaration of all-weather swimming, surrounded by coastal vistas or art-deco elegance, and many lidos have served as a focus for community regeneration.

Lido regulars are also alert to the danger that, with pools closed, inexperienced swimmers may be more tempted by unguarded open water, while the RNLI and other agencies have reiterated safety warnings after a spate of drownings, including the death of a 10-year-old boy at Loch Lubnaig in the Scottish Highlands on Wednesday.

Emma Pusill, the co-author of the Lido Guide, a celebration of all publicly accessible open-air pools in the UK and Channel Islands, declares herself baffled by Johnson’s decision to allow commercial open-water venues – like the Cotswolds Water Park – to restart, but not lidos. “It shows a sad lack of understanding of their unique nature,” she says.

“The majority of lidos are community-run and operate on a financial knife edge. They’re currently unable to earn any money over a summer of good weather and I fear that for some pools this could spell their demise.” A number have already taken the decision to remain closed until 2021 in the face of continued uncertainty.

At the UK’s oldest freshwater outdoor baths, Pells Pool in Lewes, East Sussex, the community association that runs it is similarly perplexed, having trained staff in revised life-saving guidance and planned a new pool layout and cleaning measures.

“We don’t understand the science behind it,” says the committee member Rob Read, echoing the Swim England chief executive, Jane Nickerson, who has written to the prime minister calling on him to explain the evidence informing his decision. “Why is it so different for an outdoor pool or a beer garden, when we know that transmission outside is very different to indoor settings?” Indeed, many advocates believe a chlorinated pool ought to trump a boozy terrace. 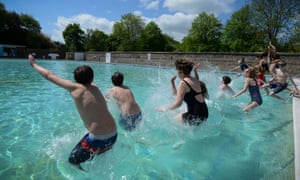 Pells Pool, which was established in 1861 and remained open through two world wars, is strongly supported by locals: more than 300 people have paid to join the ‘friends’ scheme that was set up at the start of the lockdown to help cover running costs. “Generations grew up learning to swim here,” says Read, “and it’s a big part of Lewes’ identity”.

As researchers at Edinburgh University trial the use of saltwater in treatment of Covid-19, across on the west coast of Scotland, Chris McEleny, a councillor, is musing on the potential impact of the study on his local coastal pool. Following a £2m refurbishment, day-trippers to Gourock Outdoor Pool now provide a summer spending boost for an area more often highlighted for its poverty indices. “It’s given the town a real boost. The pool is usually open until the end of September, so we can only hope that the restrictions will be lifted, people can come to Gourock, have a safe swim and help the local economy.”

As well as the more evident health and wellbeing benefits of open-air exercise, Pusill suggests lidos attracts people who would not ordinarily use indoor pools, making them more female- and family-friendly. “They are less intimidating, there’s less lane-raiding,” she says.

“Body type, ability, age … it doesn’t matter. You can spend all day there with children splashing about.” Volunteering at a lido brings benefits too, according to her research. “It’s a social lifeline for some people and embeds lidos in the local community rather than being just another amenity.”