The shipping forecast is probably the closest thing we have in the modern age to a national epic. The institution’s rhythms and rituals have changed little since it was first broadcast on New Year’s Day 1924: there is poetry in the daily litany and mystery in its terminology. “The radio’s prayer,” Carol Ann Duffy called it. For Seamus Heaney it was “a sibilant penumbra”.

The forecast reminds us we’re a maritime nation and its map binds us to our continent, covering not only our own coasts and waters but an area extending from Norway to Portugal to Iceland. There is democracy in its geography, where tiny Fair Isle carries as much heft as mighty Biscay while Lundy, a sliver of rock in the Bristol Channel, is equal in importance to the Irish Sea. And from the salty old seadog in his brine-encrusted fishing boat to the merchant banker on his yacht, the shipping forecast, all seafarers are equally reliant on it. 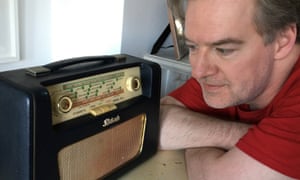 Of the four daily broadcasts by BBC Radio 4 on behalf of the Maritime and Coastguard Agency, my favourite is in the early morning. Usually this one goes out at 05.20, but in our current emergency it’s broadcast at 05.33, those 13 minutes representing the only significant schedule shift since the service was suspended altogether during the second world war. Before this, no disaster, no crisis and certainly no Test match climax had shunted the iron horse of the schedule from its position.

A trip around the world through local radio stations

While many prefer the cosy, late-night feel of the 00.48 forecast, all soothing nocturnal intimacy and somnolent talk of “falling slowly”, for me you can’t beat being roused from sleep by the familiar rhythmic intonation of the pre-dawn broadcast. Every morning I’m coaxed awake by a meteorological gazetteer of familiar names – Tyne, Dogger, Fisher – and cryptic crossword clues of forecast detail, on the face of it impenetrable but actually fairly straightforward. First there’s the wind and its direction and predicted strength according to the Beaufort Scale, north-westerly five or six, followed by the weather conditions, rain later, and finally the visibility, good becoming moderate. 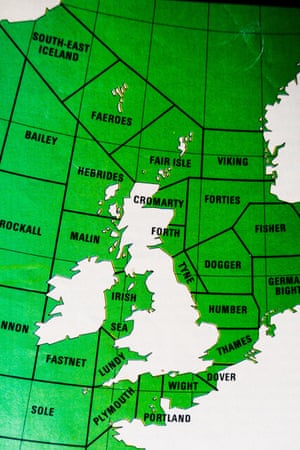 There’s reassurance in regularity. The forecast always progresses in the same order around its 31 sea areas, beginning with Viking off the coast of Norway and moving broadly clockwise, zigzagging across the North Sea, along the Channel, turning south towards the Iberian peninsula then tracing the Atlantic fringe back up to south-east Iceland.

For those not out at sea, it’s a journey to fire the imagination without lifting your head from the pillow, a 31-stop tour better measured in duvet togs than kilometres, an odyssey in the mind through familiar places – Dover, Hebrides, Wight – and locations that seem to defy conventional mapping: Fisher, Sole, North Utsire.

Not many people can say they’ve been to Utsira. I have. North and south. (The island off south-west Norway has been officially spelled with an “a” since 1924, though neither North or South Utsire appeared in the shipping forecast until they were introduced in 1984.) Reached by a heaving, churning 70-minute ferry ride across some of the most tempestuous waters in northern Europe, Utsira wears its forecast fame lightly. Not many places are namechecked on the BBC eight times a day, but forecast familiarity hasn’t inspired a flood of visitors. When I explained to the captain of the ferry why I was there (he’d assumed that, with Utsira boasting Norway’s widest variety of avian life, I must be a birdwatcher) he blinked a couple of times, said “OK”, and climbed back up to the wheelhouse.

By chance I happened to be there the weekend Utsira’s football club was holding its annual knees-up, and I wangled an invite. Fielding a team from a population of a little over 200 is achievement enough, but the impressive collection of trophies I saw in a cabinet suggested that on the football field at least, Utsira was punching above its weight.

“They [the trophies] are all old,” one of the players shouted into my ear above the music. “The sea crossing to the island is very rough. Sometimes teams would arrive barely able to walk from the seasickness, so we’d beat them easily. Then they all got together to complain. Now we have to play all our matches on the mainland and don’t win anything any more.”

I’ve now travelled to, or through, all of the shipping forecast’s 31 sea areas, which means the daily broadcast invocation conjures up my night on the lash with Utsira’s footballers, along with many other faces and places to which I can return without getting wet. 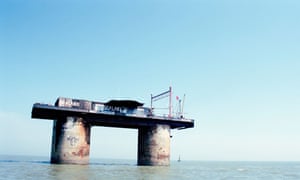 In area Thames, for example, I was lucky enough, after a six-month visa application process, to visit the Principality of Sealand, since 1967 a self-declared independent nation on a former British gun emplacement in the North Sea. The platform on two vast concrete legs eight miles off Harwich looks like a North Sea Stonehenge. Arriving was unforgettable: Prince Michael of Sealand himself escorted me out there on a royal RIB and the micro-nation remains the only country in the world I’ve been winched into. Once I was through immigration, the pizza delivery leaflet pinned to a corkboard represented one of the greatest examples of optimism I’ve ever seen.

I’m convinced that wherever you go, however unpromising or uninspiring a place might appear, you’ll always find something to make the visit worthwhile: a quirky piece of local history perhaps, or someone with a hell of a story to tell. It’s a theory that has served me well wherever I’ve been – and I’ve been to Stevenage – and has only failed me once.

Shipping forecast area Fisher widens into the North Sea from a small stretch of the west coast of Jutland, northern Denmark. The only place to visit is the port of Hanstholm, where I spent a long weekend. A really long weekend during which I found nothing to do and nothing to see. Nobody hangs around Hanstholm; they roll off the overnight ferry from Norway and head straight off. Not me. My weekend there must have come close to contravening the part of the Geneva Convention dealing with sensory deprivation. To give you an idea, according to someone I spoke to, the name Hanstholm is derived from an old Norse word meaning “islet of the glove”. The story goes that many years ago a woman once dropped a glove there. 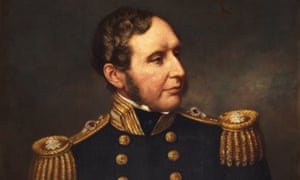 Fortunately the broadcast sweeps me past Fisher and on to other memories, other places I can revisit without leaving home. There was the time in Galicia when I sat for hours and watched the sun set over the Atlantic from the tip of Cape Finisterre – from finis terrae, the end of the earth, a holy place since way before Christianity. It gave its name to the sea area until 2002, when the Met Office renamed it FitzRoy to avoid confusion with the French and Spanish forecasts, whose Finisterre is of different dimensions. FitzRoy is named for Vice-admiral Robert FitzRoy, best-known as captain of the Beagle when Charles Darwin was aboard, but who in 1854 founded what became the Met Office, set up specifically to provide weather information for seafarers.

As the area forecast reaches its conclusion I think of how I once stood on a black beach at the foot of a black mountain looking out at a grey sea under a grey sky, a monochrome vista that was the legacy of a 1973 volcanic eruption on the Westman Islands (Vestmannaeyjar) off southern Iceland. Standing on land that’s younger than you are is a sobering way to finish any journey. 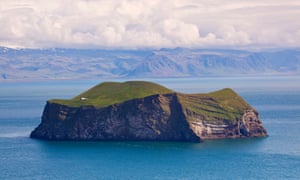 For all the poetic inspiration of its curious place names and recondite meteorological phrasing, the shipping forecast is there to save lives. The number of disasters and tragedies averted thanks to sailors and skippers being made aware of impending storms and high seas is impossible to calculate. The reassurance of its rhythmic incantation goes much further though, way beyond the seafarer. The daily recital wakens and nurtures something deep within us, a maritime people, its poetry of protection an evocative reminder that not everything about being an island nation is insular or inward-looking. The beauty of its composition and delivery serves only to elevate the forecast further in our national consciousness.

“The shipping forecast is the closest I ever came to reading out poetry on the air,” the BBC broadcaster Charlotte Green once told me – and she should know, having been effectively the voice of the forecast for years. “There’s a real appeal about it, even if you don’t know anything about the sea and don’t know what the terms mean. It’s absolutely mesmerising.”

• Charlie Connelly is author of Attention All Shipping: A Journey Round The Shipping Forecast (Little, Brown)