‘The phone started ringing even before he’d finished talking,” says Daniel Holder, referring to Tuesday’s announcement by Boris Johnson that campsites and hotels are allowed to reopen on 4 July. Four of the 12 people employed by Holder, managing director of The Quiet Site, an ultra-green holiday park in Ullswater, Cumbria, were poised to speak to people eager to book a stay at the site. At the same time, Holder was replying as fast as possible to a flood of emails. “We had 206 in the first hour.”

It doesn’t surprise me that people are so keen to visit. The Quiet Site is an exceptional place. In April it became the first holiday park in the country to win a Queen’s Award for Enterprise. And the campsite’s post-lockdown credentials are impeccable. With its Hobbit Holes, pods and generously-sized pitches spread out over the large site, social distancing should be easy. Its location on a rural hillside also means visitors are far from the pell-mell of urban life of any sort. And if the enforced isolation has left you starved of soul-easing views, you won’t even have to leave your tent to drink them in. I stayed there last autumn and even though my visit coincided with rather iffy weather, I still had a cracking time.

The Quiet Site is high above Ullswater, sheltered by the perfect dome of Little Mell Fell. As well as pitches for tents and campervans, it also has pods (designed by Kendal’s Ian Bone, whose classic “upturned boat” shape you see in many places now), and 15 partially subterranean mega-pods that are as snug as their name suggests. 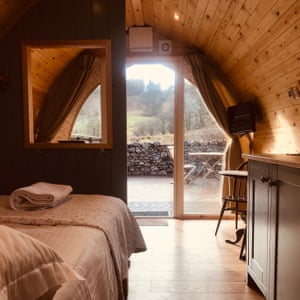 Not one to do things by halves, Holder’s installation of solar panels, extreme insulation and a biomass boiler fired by locally-sourced woodchips has made the site not merely carbon neutral but carbon positive. But if you’re thinking “hairshirt”, think again. My Hobbit Hole came with thermostat-controlled underfloor heating beneath its stone flags. There’s also a microwave, fridge, kettle and a spacious loo.

I was told that the cushioned sleeping platform that filled one end of the living space was large enough for a family of six, so I sprawled upon it with the joy of a man who did not have to share it with five other humans. I needn’t even have brought my sleeping bag because bedding is available for a small charge. For now, the site will run at 50% capacity but Holder hopes it will be back to full capacity by the time the school summer holidays start.

“We want it to be a progressive opening. It wouldn’t be right for our staff or locals if we were full immediately but we will start slowly and build on it as and when we can,” says Holder.

When I arrived last year, I did so on a pleasant mostly back-lane cycle from Penrith station. Once I’d settled in and put the kettle on, I sat outside in one of the old school deckchairs, sheltered beneath my new dwelling’s ample awning, and gazed idly out. Beyond a billowing tent and a thicket of trees I spied silvery fragments of Ullswater beneath the broad green brushstroke of Barton Fell. From somewhere behind me, a rook rattled out a throaty cheer. 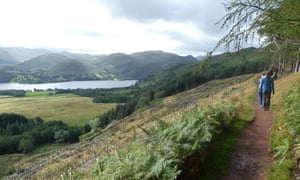 The next day it rained. Undaunted, I ventured out along a section of the Ullswater Way, a 20-mile waymarked footpath. My four-mile walk from the campsite – over the exposed Gowbarrow Fell and down to the waterfalls of Aira Force – was somewhat damp, but the rain did at least ensure that the waterfalls plunged with enough drama to justify the sousing.

Helvellyn, that mighty warrior among Cumbrian fells, had burrowed itself away into the clouds and the gusting winds were so ferocious that the Ullswater steamers that ply the mere had been cancelled. I was thankful for a cosy dinner at the award-winning Another Place, a lakeside hotel and restaurant in nearby Watermillock, where I wolfed down a warming coconut katsu with tofu.

The next day, armed with a map of the 1618-hectare Lowther estate’s cycle trails, which opened in 2019, I took my electric bicycle to a castle bathed in sunshine.

“We’ll have a whip around Askham Fell and take in a couple of neolithic burial chambers and a stone circle.” 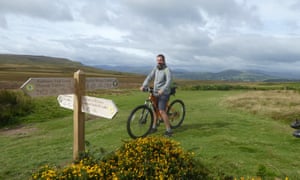 It’s the kind of sentence I like to hear: full of outdoorsy, nosing-about-in-history promise. It was spoken by Alex, a whip-thin bicycle tour guide. I couldn’t help feeling it was cheating – the fact I’d hired an electric mountain bike for the day – but it did rather take the sting out of the Lake District’s vertiginous inclines. It also meant I could take advantage of the maze of stony, grassy and, at times, gloriously boggy bridleways on the fells and a new network of waymarked cycle trails on the Lowther Castle estate.

The greater part of the 1st Earl of Lonsdale’s grand Georgian mansion is a shell. It is the magnificent 52-hectare gardens that are the castle’s glory. At lunch, I headed for Askham Hall’s Kitchen Garden Cafe, a five-minute woodland ride away. I had a tasty artichoke, olive and homemade-pesto pizza from an outdoor wood-fired oven and then wandered about Lowther’s modern parterre – created by rockstar garden designer Dan Pearson.

Back at base, I had breakfast served to me by The Quiet Site’s Spicy Sausage food van and dropped in at the excellent on-site zero-waste shop. There I borrowed some washed-up containers and filled them with popping corn and sugar in preparation for a late-night treat, adding rather healthier muesli for the morning. Since my stay the van has gone but the zero-waste shop has been open for locals throughout lockdown. 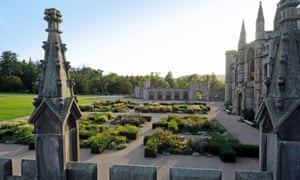 Undoubtedly the most surprising thing about The Quiet Site is its bar. Yes, I know: campsite bars are where dreams go to die. As I entered The Quiet Bar, my expectation meter was showing high levels of trepidation. What I found was a traditional 17th-century Cumbrian Long Barn converted in the 1960s and lit by fairy lights wrapped around beams, making it positively murky … but in a good way. A couple of rustic wooden galleries were filled with extra settees and old church pews. They were needed, too: despite it being a damp Tuesday night the bar was buzzing. Happily, it reopens on 4 July – it will be seating only and table service but the beer will be just as good.

I sampled a draught Ullswater Blonde, the local Tirril brewery’s very more-ish pale best bitter, and watched that night’s billed entertainment: a very young man in black tie shimmying from table to table doing polished little magic tricks as if we were in Vegas. To top it off, the bar staff had a simple but brilliant music policy: if David Bowie didn’t sing it, they didn’t play it. Heroes.