It was the talk of a traditional sweetshop that did it. In the Black Sea port city of Sinop, where boats have names like Masallah and Seref Kaptan, I had just finished a plate of mantı, large, soft dumplings topped with melted butter, chopped walnuts and thick, silky yoghurt. As I floated happily on a carb cloud, the waiter handed me a marzipan-style sweet (“a gift, you are our guest”) crowned with half a walnut. It was the handiwork of master confectioner Mehmet Gürbüz, whose shop, Sekerci Mehmet Gürbüz, run by his son, stands opposite the dumpling purveyor, Ornek Mantı. Mehmet himself, I was told, looks after his original wood-panelled shop in a small town called Boyabat, an hour inland.

I wanted to meet Mehmet and I wanted to try his sweets in situ. What I didn’t want, having already travelled 430 miles by coach from Istanbul, was to be held ransom to more bus timetables, or to miss any enticing roadside cafes.

So the following day, my husband and I rented a car for a few days, to explore Turkey’s vast Black Sea region. We would stop at the ancient inland cities of Amasya and Tokat, home to unusual culinary specialities, before travelling on to the eastern Black Sea city of Trabzon, covering roughly 450 miles. Along the way we’d sample all the Black Sea larder has to offer, from specialist kebabs to hazelnuts and rich highland dairy products. 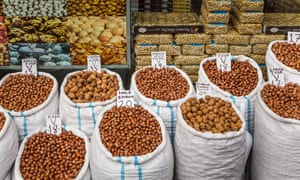 Before leaving Sinop, we visited the Fortress Prison, or “Anatolian Alcatraz”, once a grim-looking jail but today a museum. Writer Sabahattin Ali, whose 1940s novella, Madonna in a Fur Coat, remains one of Turkey’s bestselling books, was incarcerated here. It was also here, 150 years ago, that two Russian convicts taught their Turkish cellmates how to make model ships: little figures of freedom, to occupy the hands and mind. Today, craftsmen make them for tourists.

The road to Boyabat was a breeze, and the sweetshop easy to find. Inside, above wooden, apothecary-style chests, stood rows of glass jars full of shiny boiled sweets. Unscrewing one, Mehmet motioned for me to dip my hand in. As I sucked the sweet (“Don’t chew!”) it slowly released tiny honeycomb nuggets.

As a boy in the 1940s, Mehmet rejected a job in the family tailoring business to create what he craved most, “the candies in the local sweetshop window”. I bought 12 walnut sweets, like the one I’d sampled in Sinop, and put the box, decorated with a ribbon, on the back seat of the car. 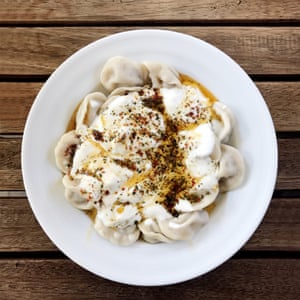 We left, driving under the shadow of the town’s ancient castle, witness to Roman, Byzantine and Ottoman rule, before stopping for an impromptu lokanta (tradesmen’s restaurant) lunch on the outskirts of town.

First to the table came fresh bread and a bowl of kuru fasülye, creamy pale beans in thick red, buttery gravy. Then a bulgur salad, a plate of 20 whole green chillies, a pile of lemon quarters and a bowl of croutons for the lentil soup. The perfect speedy roadside meal: simple, inexpensive and unpretentious.

We left Boyabat, trailing a minibus filled to the roof with another Black Sea speciality, beyaz altın (white gold), super-strength garlic from the Black Sea city of Kastamonu. This allium is famous for being up to 10 times more pungent than normal garlic. 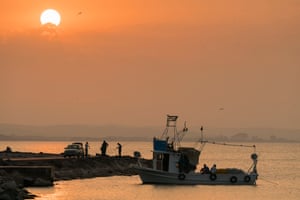 The road to Amasya was cinematic: velvety hills, pale as sand dunes, met wide, scrubby plateaux, fields of sunflowers, zigzags of pine-scented lanes and the odd signpost warning of boars. Some hairy, on-bend overtaking aside, the going was good and the landscape was as soothing on the eyes as the Black Sea, now 100 miles or so away.

If, as republic founder Kemal Atatürk said, Sinop is beautiful, then Amasya is strikingly so. Surrounded by apple orchards, it is dominated by Mount Harşena, a jumbly escarpment of pigeon-grey limestone stacks that line the banks of the Yeşilırmak (Green River). The rock-cut tombs of the kings of Pontus, dating from the second and third centuries BC, overhang the water. At night, they’re lit up neon blue, a reminder of when Persian governors established the Pontic kingdom, choosing Amaseia (Amasya) as the capital city. 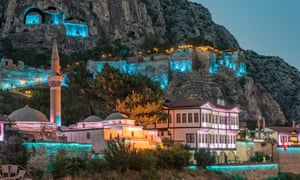 I walked towards the 14th-century mental hospital (which, I later learned, pioneered the use of music therapy) in search of Amasya Çörekcisi bakery. Baking the city’s buns since 1925, it is known for its sweet rolls – flaky and soft, studded with walnuts, poppy seeds and hazelnuts.

Crossing the river, I found a more unusual dish to try – toyga, a white soup, thick with chickpeas, wheat and yoghurt. Amasya is known for its okra, too, which, according to legend, Mehmed the Conqueror’s horsemen would dry out and wear as ornamental beads.

That night, after drinking rakı with a wedding party, we stayed in a handsome, half-timbered, riverside Ottoman mansion, Uluhan Hotel (doubles from £36). 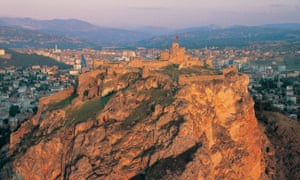 The following day, we took the road to Tokat, an easy two-hour drive away. Twinned with Mogadishu, Tokat counts old Seljuk caravanserais, calico artisans and orchards of pear trees among its attractions, as well as its famous Tokat kebab. Keen to try it immediately, we headed to the hilltop Seyirtepe Cafe. Its circular dining room has floor-to-ceiling windows with unobstructed views over Tokat. The kebabs, made with six-month-old Karakaya lamb, aubergine, tomato, a scattering of whole garlic cloves and peppers, and served on paper-thin lavash bread, are capable of sending Tokat citizens misty-eyed at the mere mention. Just one bite confirmed its excellence.

Next day, our journey back to the coast switched from laid-back jaunt to a Top Gear white-knuckle ride. We were prepared for a seven-hour drive to Trabzon on narrow roads, via the city of Giresun, but the satnav packed up, and we found ourselves unwittingly scaling a foggy, 2,200-metre high mountain pass called Eğribel Geçidi. Asphalted but badly potholed, it was a slow, blind climb. Later, I found it listed on a “Dangerous Roads” website, included because it is regularly shrouded in dense mists that roll in from the Black Sea and are trapped by the mountains.

Eventually we were back down, safe, in a landscape of mountains tinged with pink, beige and cream, wild flowers on the roadside and clear blue lakes. I jumped out of the car to take photographs at every opportunity. 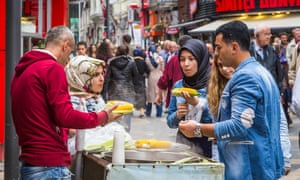 We finally arrived at the sea and the town of Giresun, known for its cherries, in time to grab a well-earned pint of Efes and catch a blood-red sunset over the harbour.

The next morning we drove on to Trabzon, via the busy and controversial D010 coastal highway, which has cruelly divorced the city and its citizens from the Black Sea.

Far from the influence of Ankara or Istanbul, Trabzon is a provincial capital with a strong identity and gritty underdog spirit. Founded as a Greek colony in the eighth century BC, it is home today to a football-mad population who decorate cafes, taxis and barbers in the claret and blue colours of Trabzonspor.

Very few Europeans bother to visit, despite its decent regional museums, pleasant cafes and proximity to the Black Sea’s most famous monastery, Sumela, which hugs a cliff face an hour’s drive away. It is an underappreciated city. 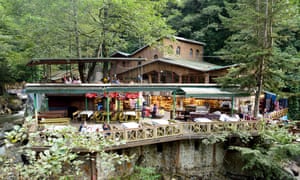 Many of those who do come are Saudi, Bahraini and Kuwaiti families, who arrive in the summer looking to escape the scorching temperatures of home and seeking the things that turn off many sun-starved westerners: misty hills, low cloud, rainy coastlines and alcohol-free restaurants.

I happily lost an afternoon in Trabzon’s bazaar, tasting huge blocks of brown-and-white-marbled helva, buying olives in a rainbow of colours, shopping for hazelnuts (70% of the world’s hazelnuts come from here) and lingering in bakeries filled with local Vakfikebir bread, round and heavy. Delis display yellow balls of butter from villages in the nearby district of Tonya, where locals still speak a Greek dialect. The butter has an unforgettably grassy, rich and clean flavour.

We were hungry for more – but satisfied that our self-drive gamble had more than paid off. It was a bittersweet moment when we handed back the car keys, taste buds still dancing, Black Sea flavours still on our tongues.

• Caroline Eden’s book, Black Sea: Dispatches and Recipes through Darkness and Light (Quadrille, £25) was named Best Travel and Food Book of the Year at the 2019 Edward Stanford Travel Writing awards. To order a copy for £22 including UK p&p visit The Guardian Bookshop or call on 0330 333 6846. Enterprise rents cars in many cities in the Black Sea region of Turkey.