Hotel secrets: Trick to avoid paying a £200,000 bill at a five star hotel – what royals do

‘Give as a goddamn answer’ Lambie rips into public servant

Revealed: The fascinating history of package holidays in the UK

Travelers returning to the skies this summer will find that a wide array of domestic lounges have reopened. However, many that cater primarily to international flyers remain shuttered.

Among the Big Three U.S. carriers, Delta has 47 of its 52 Sky Clubs open, most recently having reopened a second lounge in Boston on June 8.

American is operating 27 of its 42 domestic network Admirals Club lounges across 21 cities and has also reopened lounges in Mexico City and Sao Paulo. However, American has yet to reopen any of its five Flagship lounges, which cater almost exclusively to business and first-class international travelers.

United is reopening its domestic lounges at a slower pace than its chief rivals. Currently, the carrier has 11 United Club lounges open, including at least one in each of its eight hubs of Chicago O’Hare, Newark, Washington Dulles, Houston Bush, San Francisco, Los Angeles, Denver and Guam, plus the Honolulu United Club. The carrier says it will have 21 lounges open by midsummer, with new additions coming in Orlando, Fort Lauderdale and Las Vegas.

United has yet to reopen any of its five Polaris lounges, which serve business-class, international flyers. Closures will continue until international traffic reaches sustainable levels, the carrier said.

Alaska, the fourth U.S. airline with a lounge network, has reopened its three Alaska Lounges in Seattle as well as lounges in Anchorage and Los Angeles. The carrier has permanently closed its New York JFK lounge. A new San Francisco lounge is scheduled to open later this summer.

Similar scenarios are unfolding at U.S. lounge networks that aren’t airline-owned. American Express has reopened 11 of the 12 U.S.-based Centurion Lounges it operated prior to the pandemic. The lone exception is LaGuardia, which is under construction; once complete, it will reopen in a larger space in the airport’s new Terminal B. The only foreign Centurion Lounge, in Hong Kong, remains shuttered. In January, American Express also opened a new Centurion Lounge in Denver. 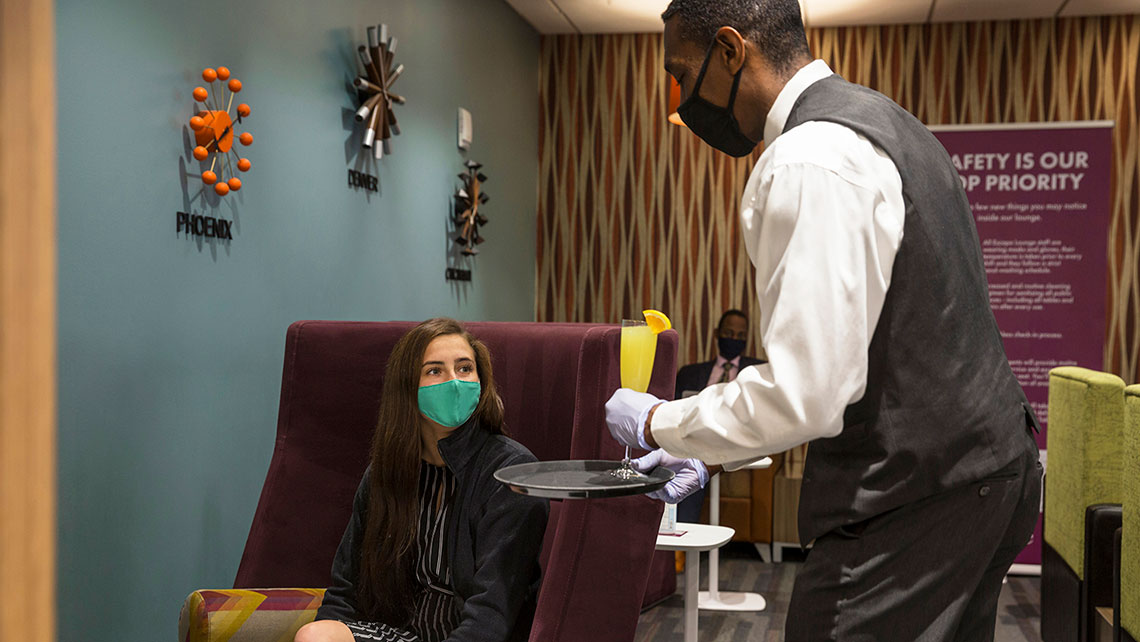 Escape Lounges, which operates a network of 13 common-use lounges in the U.S. that charge a daily fee for access, has reopened five of those locations, including two in Ontario, Calif., and lounges in Phoenix; West Palm Beach, Fla.; and Reno, Nev. Reopenings in Oakland, Calif., and Hartford, Conn., are slated for later this month, interim COO Sid Higgins said. None of Escape’s five U.K. lounges have reopened.

Continuing travel restrictions are the primary reason many lounges serving international travelers remain closed. Virgin Atlantic, for example, has yet to reopen any of its Clubhouse lounges, including its renowned JFK Clubhouse. In London Heathrow, the situation is complicated because the lounge is located in Terminal 3, but Virgin is temporarily operating out of Terminal 2 due to pandemic-related terminal consolidation.

Still, some international lounges have reopened. Lufthansa, for example, reopened its First Class Lounge at Frankfurt Airport on June 1. The Swiss Business Lounge at New York JFK, which is run by the Lufthansa Group, is also open, though only for four hours per day. More lounges will reopen in the coming weeks, Lufthansa said.

Priority Pass, whose members have access to a network of more than 1,300 lounges worldwide, said that more than 50% of those lounges across the globe are currently open.

Some lounges, like the Swiss Lounge in New York, have shorter hours. And Lufthansa is requiring proof either of vaccination, recovery from Covid-19 or a negative Covid-19 test for entry.

Lounges throughout the U.S. are still required to enforce the federal mask mandate for airports except when customers are eating and drinking.

Service protocols have also been altered at many lounges, though not necessarily for the worse. Escape Lounges used to serve its freshly prepared food buffet-style. Now, customers receive table service after accessing the menu via QR code. Food options remain as varied as ever, Higgins said, including rotating seasonal offerings.

Escape has also replaced physical newspapers and magazines with a digital library of thousands of publications. And it used the Covid-19 pause to renovate lounges in Reno, Minneapolis, Oakland and Hartford. “We took the opportunity of the restrictions to actually improve the service for our guests,” Higgins said.