British Airways launches massive sale on flights to the US, Dubai and Europe

‘It’s not worked!’ Traffic light system could be scrapped and cost of travel cut – warning

‘Confidence in our loyal British visitors’ – Tourism ‘bouncing back’ in Balearics

Many places claim to be in the middle of nowhere – this one really is: Stepping off a seaplane into an out-of-this-world paradise in the South China Sea

Rain hammers down on the tin roof and the tiny ten-seater seaplane rocks from side to side. ‘You’ve chosen a good day to fly with us,’ the barefoot pilot says with a smile.

The sky is black as we take off along the sodden runway, and lightning strikes the second the plane lifts off the ground.

For more than an hour, we see little but the blue of the South China Sea until, out of nowhere, six jungle-covered islands rising out of a twinkling lagoon loom into sight. The seaplane circles them, creamy in the afternoon sunlight, before landing on the reef-specked water. 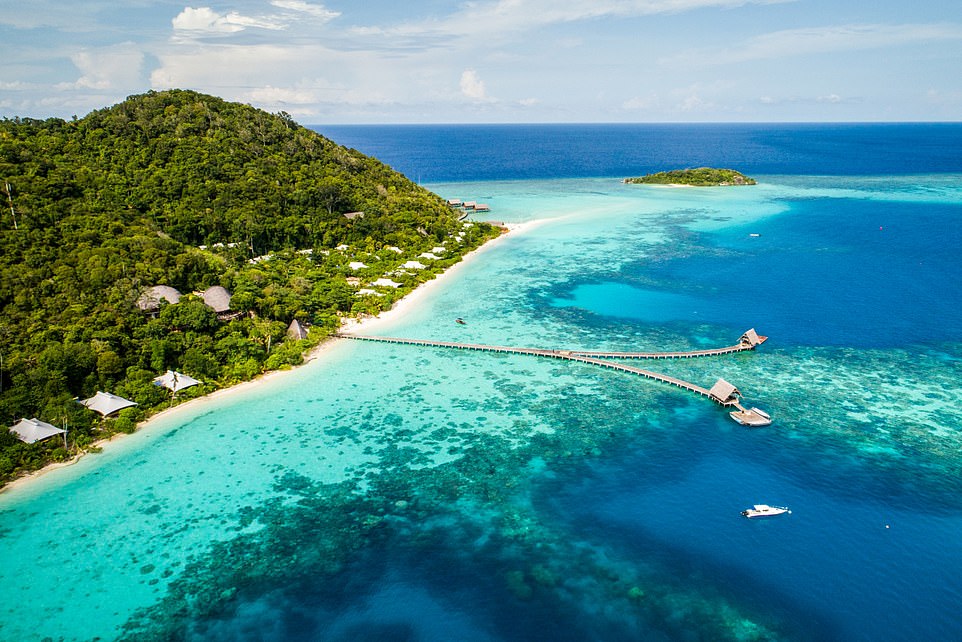 Happy days: Indonesia’s Bawah island, which features 36 villas perched on stilts above the ocean, snuggled in the forest or hugging the beach 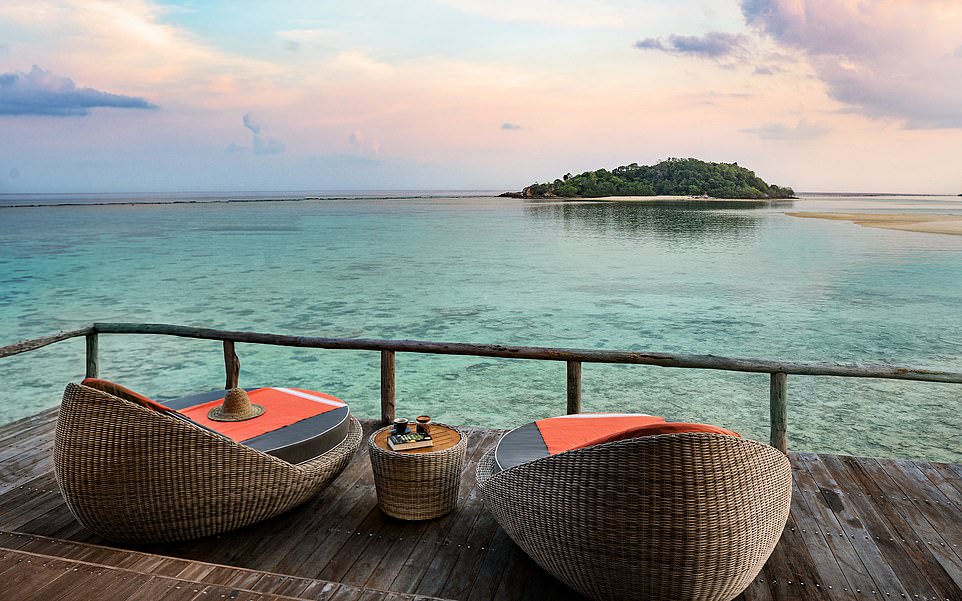 The view from one of Bawah Reserves’ villas, out over the clear waters of the South China Sea

Bawah Reserve, a remote atoll in Indonesia’s Riau Archipelago between Borneo and Malaysia, is a four-hour adventure by ferry and seaplane from Singapore.

Our journey begins with an overnight stay at the Six Senses Maxwell in the Lion City, where my friend Christina and I spend the evening sipping Singapore Slings in the bustling food markets before setting off the following morning.

Set over 750 acres, Bawah encompasses six islands — Merba, Sangha, Lidi, Elang, Takong  and, our home for three nights, Bawah. Its 36 villas are perched on stilts above the ocean, snuggled in the forest or, like ours, hugging the beach.

The cluster of uninhabited islands was bought in 2010 and, after five years of construction, Bawah reserve opened in 2018. 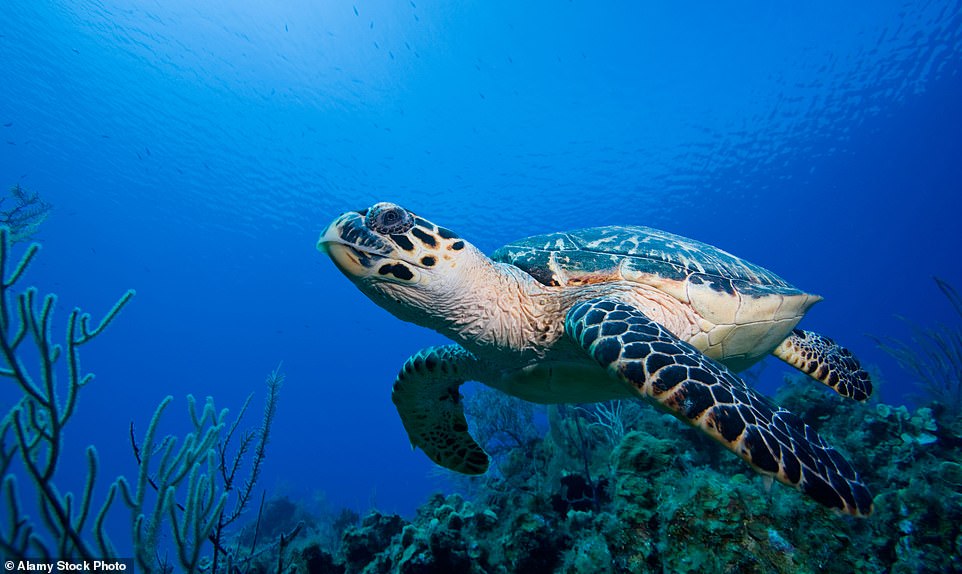 Harriet spotted a ‘beautiful, lichen-covered hawksbill’ turtle while swimming off the coast of Bawah 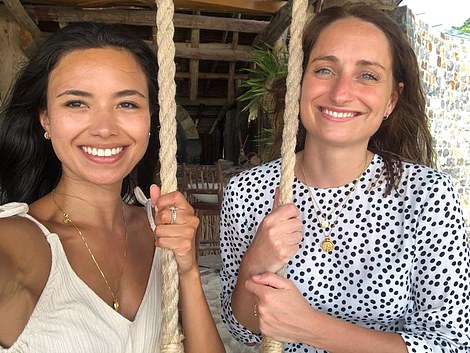 Harriet (right) with her friend Christina. The duo started their adventure with an overnight stay at the Six Senses Maxwell in the Lion City, Singapore, where they spent the evening ‘sipping Singapore Slings in the bustling food markets’

There are 137 members of staff on the island but just six other guests; a German financier and his wife, a bronzed young couple from Melbourne and a Saudi prince and his fiancée, though they chose to pay tens of thousands of pounds to charter a private jet in order to avoid the 30-minute public ferry crossing — obviously.

As we step from the seaplane onto the wooden fishtail-shaped jetty, we’re welcomed by a party of musicians playing local percussion drums and greeted by Eva, our personal host. She guides us along the island’s sandy pathways, lined with palms and Indian almond trees, and points out placid, crocodile-like monitor lizards — some 6ft long — and amber-winged butterflies.

Wooden boards painted with our names hang at the entrance to our beachfront suite, which is made from chunky bamboo and recycled teak, and kitted out with jellyfish-shaped chandeliers and a freestanding rustic copper tub. We have our own private beach overlooking the lagoon, complete with an outdoor shower and squidgy sunbeds, from which we can watch families of bashful hermit crabs scuttling into the lagoon.

Step into the 28c water anywhere on the island and, after a few kicks of your flippers (which will be found in the correct size in your villa), you’ll be gliding above a whole other world. 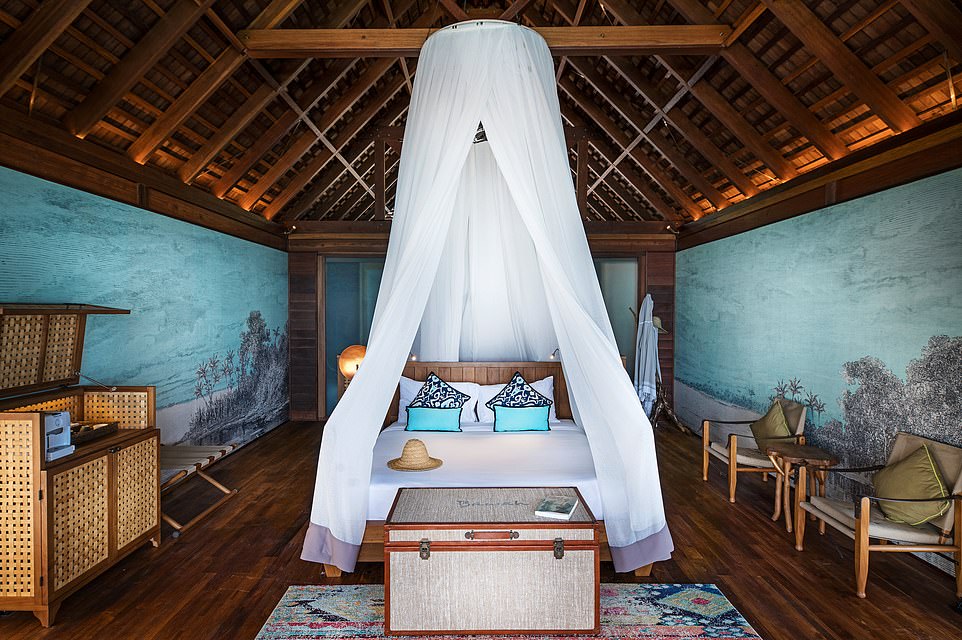 Harriet and Christina’s home for three nights was this beachfront suite made from chunky bamboo and recycled teak, and kitted out with jellyfish-shaped chandeliers and a freestanding rustic copper tub

I’ve long wanted to swim with turtles, so each afternoon I head out on a mission with my snorkelling instructor, Jerri. Like most of the staff here, he’s local, having grown up on an island 20 miles away. His English is limited but he’s eager to learn and knows the reef like the back of his hand.

I’m not hopeful. But just minutes after we hop off the boat, a plume of bubbles fizz past my mask as Jerri splashes the water to get my attention. And there he is, just a foot or two away, a beautiful, lichen-covered hawksbill. He’s huge, about the size of my suitcase, with a speckled head on a leathery neck. 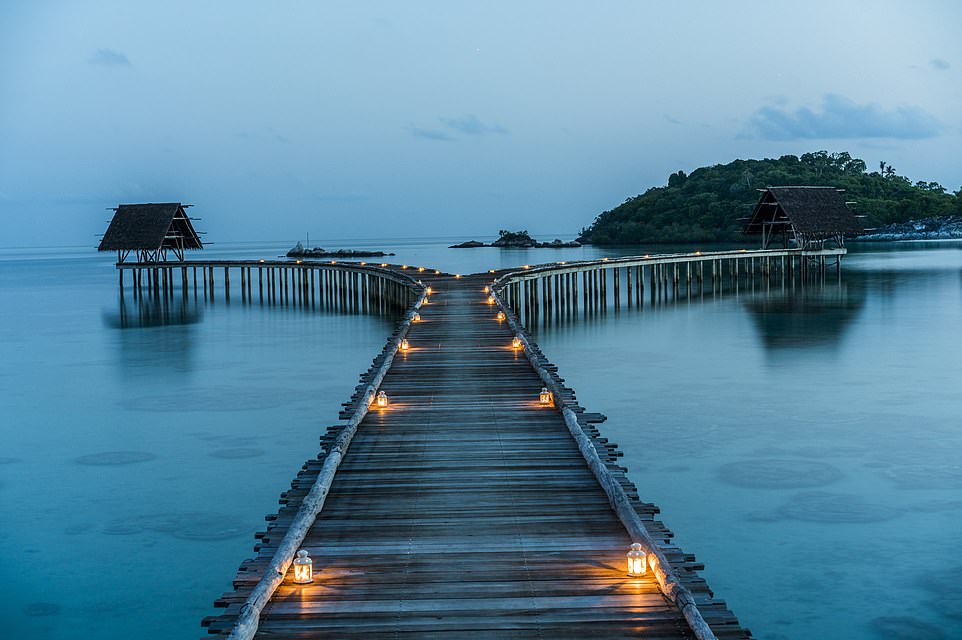 ‘Many places claim to be in the middle of nowhere; this one really is,’ remarks Harriet

We follow him as he majestically navigates the reef while trying to find his lunch. But then he stops, turns and fixes me with a scornful look before gliding away. It’s a sight I’ll never forget. For Jerri, it’s like spotting a robin in the garden.

Until recently, the only populated island here was Bawah. But the resort is set to launch its most exclusive offering yet when it reopens early next year: Elang Island, a five-minute boat ride across the lagoon from Bawah. Elang is social distancing at its most luxurious, home to six cliffside lodges sleeping just 14, a restaurant, bar, spa, saltwater infinity pool — created from a natural hollow and replenished with every tide — and, of course, its own butler.

So, could I find anything to complain about at Bawah? Well, the price. Villas start at £1,500 per night, so it’s aimed at those with deep pockets. But once the seaplane touches down, almost everything is free, including all activities, meals and the spa, where we head for massages, rose-scented facials and lime sugar scrubs every time a thunderstorm rolls in. Bawah is also a long way away — but that’s what makes it is so special. Many places claim to be in the middle of nowhere; this one really is.

Villas start from £1350 per night for two people on a full board basis including daily treatments, laundry, in-room minibar, land and water-based activities.

Take over Elang Private Island on an exclusive-use basis from £11,000 per night (bawahreserve.com).

Return flights with BA from London Heathrow to Singapore start from £492 (ba.com).