An Inspector calls… at The Elms in Worcestershire, which has been ‘blinged up’ by its new owner

The Elms, in Abberley, Worcestershire, has a chequered history — which is entirely (and unfairly) due to when it was part of the Von Essen group, headed up by Andrew Davis.

Davis turned out to be more profligate than people previously had thought, as he was driven around the country in his Rolls-Royce.

The group went into administration in 2011 and most of the hotels, including Cliveden, found other owners. This one was acquired first by the Luxury Hotel Group and more recently by a local businessman, who has blinged it up in a riotous sort of way and hired a group of charming, young, enthusiastic staff. 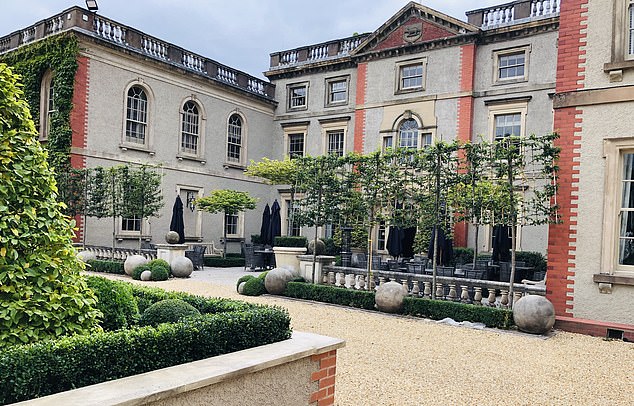 The Elms, in Abberley, Worcestershire, pictured, which was recently acquired by a local businessman

Before lockdown, an overhaul of the spa and pool area was set in motion — and so anyone looking to do some lengths or have a treatment will be disappointed for the next few weeks.

Built in 1710 by Thomas White, a pupil of Sir Christopher Wren, this stately home has commanding views into Wales at the back of the building and is close to the splendid Witley Court and West Midland Safari Park.

We arrive in time for a cream tea, sitting in a courtyard outside the front door, where it’s impossible to escape the piped music. Inside, the hall is cluttered and the colour scheme is dark and not particularly moody. 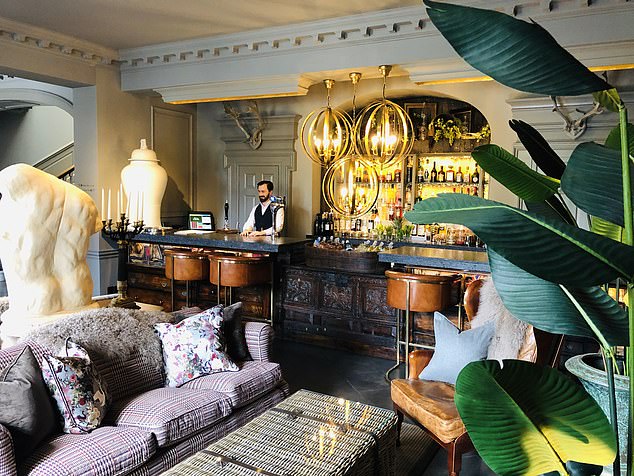 One of the bars at The Elms. This stately home has commanding views into Wales at the back of the building and is close to the splendid Witley Court and West Midland Safari Park

Room 5 has the prettiest of windows but you can hardly see them for the heavy curtains that hang over them and can’t be drawn all the way back, plus a huge fake orchid standing on a table —and Venetian blinds to obscure them even more.

The walls are battleship grey, one of which has a plaster hand stuck to it. The hand holds two apples and printed on the wall is ‘an apple a day’.

Elsewhere, two lifesize tin greyhounds stand in front of the bed, which has a headboard practically to the ceiling.

Some people will think this room fun; glamorous even. Others will see it as trying too hard, overly busy. We’re in the second camp.

But we like the two bars and it’s a pleasure to sit out on the back patio where there’s no muzak.

Unlike the decor, the menu is not overly ambitious — or overly priced — and there’s a good selection of vegan options for those so inclined. We go for a steak and a burger and relish the joy of eating out after so long locked up.

The Elms feels like a happy place — and that’s important.