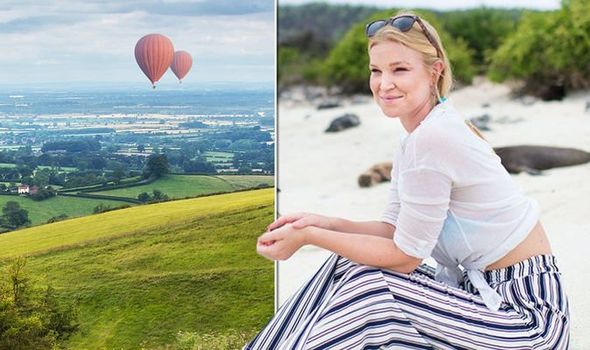 Alex Outhwaite, who presents Off The Grid and Backpack on Travelxp, on SKY in the UK, has traveled to almost 70 countries across the globe. The Briton is an avid backpacker who documents her travels on her Youtube and Instagram accounts, where she boasts 156k subscribers and 59k followers respectively.

Certain UK locations are hotspots of staycations, including Cornwall, the Lake District, and the Cotswolds.

Alex said: “The Yorkshire Wolds are maybe going to be added to the Areas of Outstanding Natural Beauty.

“I think it’s been 25 years since they added a new place to the list.”

There are currently 46 in the UK, including the Malvern Hills, East Devon, and the Cotswolds.

“It’s quite a big thing for the Yorkshire Wolds,” Alex went on.

“They are so, so beautiful. The hills and valleys, it’s absolutely stunning.

“I think a lot of people don’t really think of the East Coast as somewhere to go, really.

“I think people think of Cornwall and Devon, which are lovely but they can be busy really in peak times.”

The Yorkshire Wolds are in East Riding of Yorkshire and North Yorkshire, and were described by writer Winifred Holtby – who lived in the area – as “fold upon fold of the encircling hills, piled rich and golden.”

It’s known for gentle hills and valleys and sweet villages and archaeological sites.

David Hockey has painted the Yorkshire Wolds a number of times.

The area is also known by walkers for Wolds Way. It is one of England’s nine National Trails.

It is 79 miles long and was the subject of a 2017 two-part BBC documentary.

It is only her second international trip since the start of the pandemic.

She took part in Phuket’s Sandbox Scheme, which is encouraging tourism on the island – which relies on the business for 90 percent of its economy.

Alex praised the scheme and described the experience.

“Hopefully it’s a sign of things to come,” Alex said.

“It’s time the travel industry got back on its feet, there’re so many people relying on it for their livelihoods.”

She suggested now may well be a good time to visit the country for those who want to see the sites.

She explained: “I went to Phuket for the first time about 10 years ago and had a really great time but it’s a popular place, it’s quite busy.

“So I remember back then going to a few of the sights to see the sunset, it’s beautiful but you’re sharing it with hundreds of other people.

“This time it obviously was quiet. We went to some of the top sites, like the Big Buddha, and there was virtually no one there. I don’t know when you are going to have the opportunity again to see some of those amazing places without the crowds.”