Lake Garda by bike? It’s so e-asy! You don’t have to be a pro to enjoy a glorious e-bike break along the shores of Italy’s largest and most captivating lake

Here I am — mud-spattered with grit in my teeth — peering over a cliff at the ruffled surface of Lake Garda.

The surface has been whipped up by the warm thermal wind that funnels down from the Ballino Pass. To the west, mountains plunge into its dark blue depths, while the shoreline is dotted with brightly painted villages almost as ancient as the lava on which they perch.

I’m cheerful, verging on exuberant, despite being nearer 60 than 50 — and about as fit as a lard cake. We’ve bounced over potholes, tree roots and slithered along mud and gravel tracks and I’m still up for more. 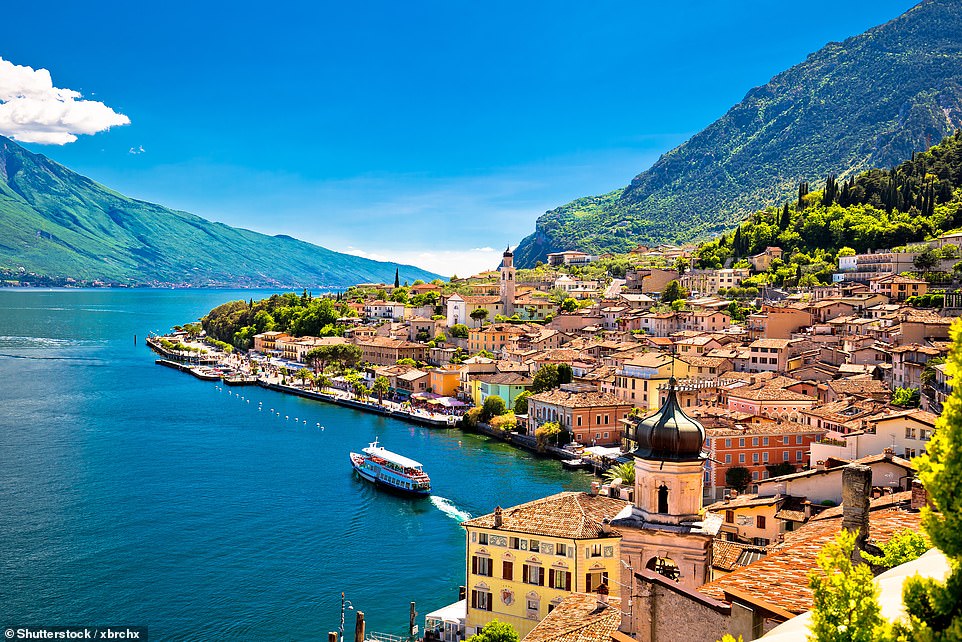 Invigorating: Limone on Lake Garda, where Mark Porter spends the final night of his ‘lakeside odyssey’ 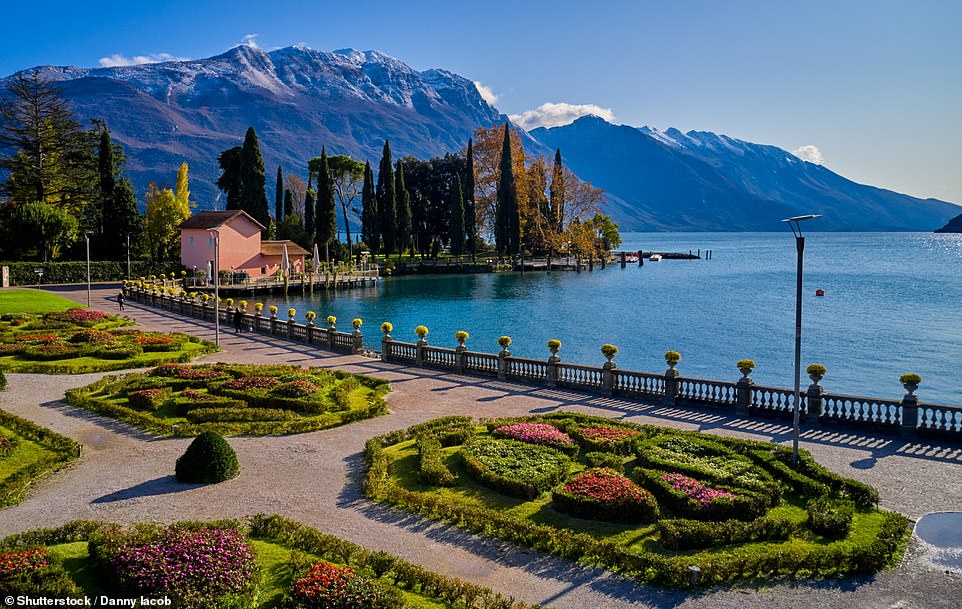 Mark begins his route around the lake in Riva del Garda (pictured), the Roman port on the northern shore of Lake Garda

At the top of the ridge near the little green lake we lunch well, if not wisely, in the cool of a wayside inn.

Huge helpings of Trentino beef stew with polenta are served with an Amarone red, before we head back down to Riva del Garda, the Roman port on the northern shore of Italy’s largest lake. The autumn and winter are great times to go cycling along Lake Garda — and, thankfully, the country is now open with no restrictions for the fully vaccinated. This was my off-road debut, although it’s time to confess: I am testing an electric prototype bike with a small group of cycle nuts before heading off around the lake on my own. My steed is a new ‘e-gravel’ bike, as comfortable on-road as it is off, and perfect for someone like me.

So after a couple of days on mountain trails I bid farewell to Johan, Ben and the techies and head off sedately on my lakeside odyssey, wending my way through Riva’s public park towards the southern end of the lake.

It is a flat and easy 40-mile ride along sun-dappled roads down to Peschiera del Garda — but I stop after 25 miles at a lakeside hotel at Torri del Benaco for lunch.

My table looks across the water to the west bank. I can make out the small town of Gargnano, where D. H. Lawrence wrote Sons And Lovers while conducting an affair with the married German aristocrat who later became his wife, Frieda von Richthofen. He records the adventure touchingly in Twilight In Italy. 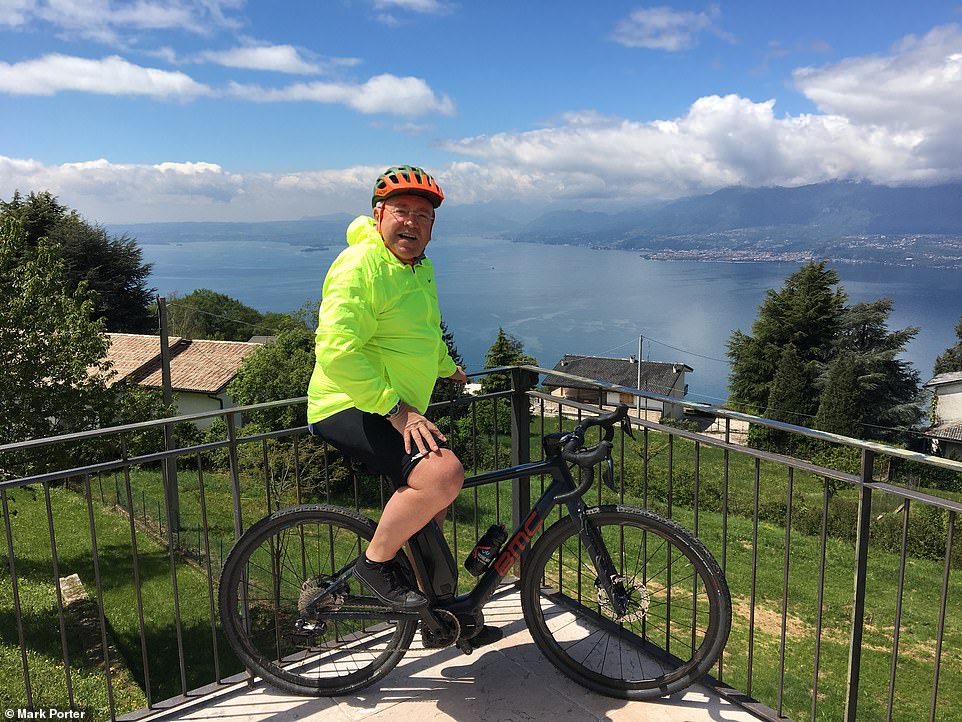 Mark on his e-bike. He tests out an electric prototype ‘e-gravel’ bike, finding it ‘as comfortable on-road as it is off’

At Peschiera, I check into the Garda Bike Hotel, a shrine to cycling if ever there was one.

A fleet of Pinarello bikes is there for the guests, and the owner, Nicola Verdolin, takes me up to the vineyard of Tenuta Santa Maria Valverde, in the heart of Valpolicella country. This is a bit of a climb, but I breeze it.

After a wine tasting with some goats’ cheese, savouring the mulberry overtones of a recent vintage from this scenic little winery, we then hurtle down the mountain, through Marano di Valpolicella and to the lakeside resort of Bardolino, where waterside bars do a brisk trade in the blazing afternoon sunshine. 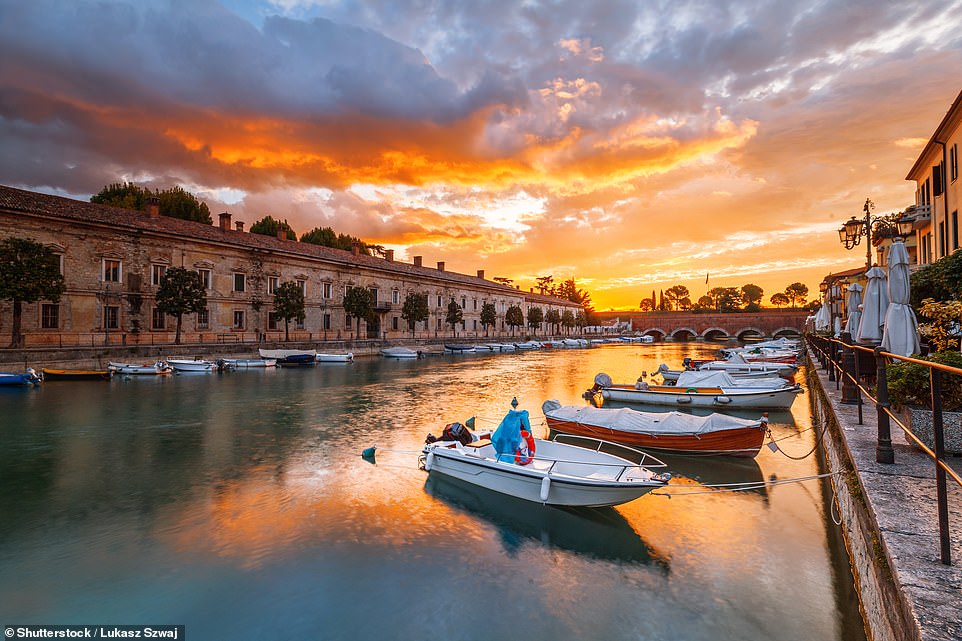 Peschiera, where Mark checks into the Garda Bike Hotel – ‘a shrine to cycling if ever there was one’ 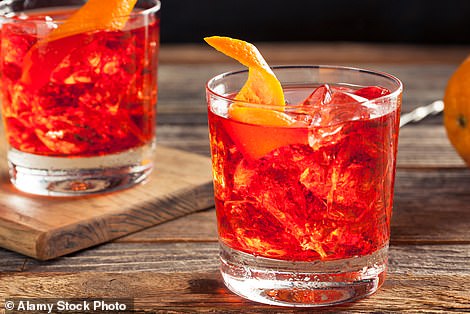 Back at the hotel, where a team of cycle pros look after all your cycling needs, food is uncompromisingly but toothsomely geared towards good health as most of the guests are more image-conscious than me.

In the cavernous bike garage my machine, a joint venture between Shimano, the Japanese manufacturers of cycle widgets, and BMC, who are Swiss bike makers, fascinates the pros.

It is the Tesla of bicycles, boasting huge distances under battery and the latest lightweight technology, sufficient to power someone like me to places I have no right to be, without too much risk of a heart attack.

You do have to pedal, though, make no mistake.

Picking up his Pinarello with one finger, Nicola looks witheringly at my machine: ‘It’s like comparing a BMW with a Ferrari.’

Lake Garda is a patchwork of boat and ferry routes and you can hop around as you wish, some of them even taking cars. I cycle on to Sirmione, the prettiest of the Garda villages.

It’s at the end of a pencil-thin peninsula and has a perfect fortress and ramparts, oozing stylish wealth. I admire the scenery over a plate of cassoeula, a Po Valley stew that goes back to Roman times. 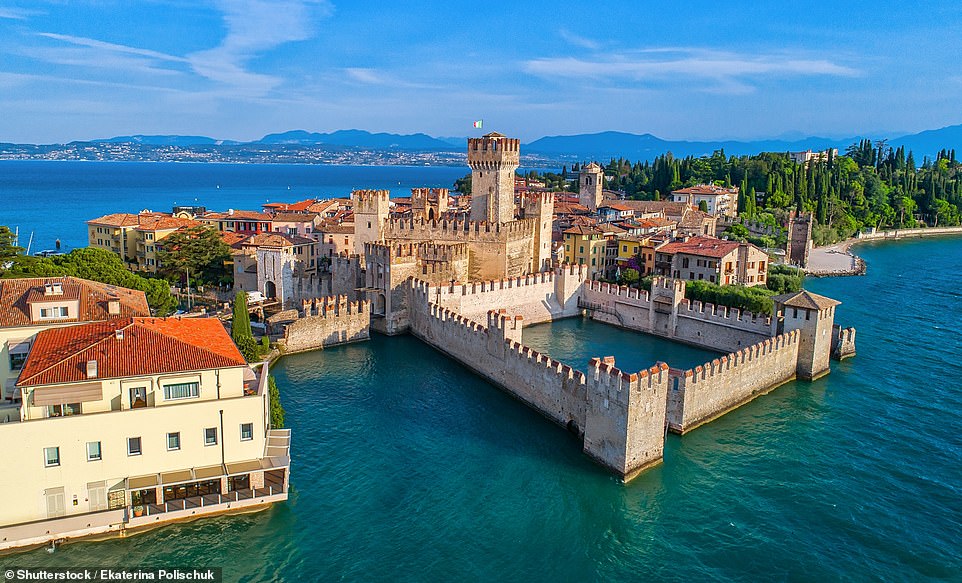 Mark says Sirmione, pictured above, is ‘the prettiest of the Garda villages’ and ‘has a perfect fortress and ramparts’

Ryanair (ryanair.com) Stansted-Milan returns from £16. Garda Bike Shop in Riva del Garda has e-bikes from £50 a day (gardabikeshop.com). Three-night stays at the Garda Bike Hotel including daily bike tours, all meals, a cycling jersey and airport transfers from £1,280; e-bikes an extra £205 pp for three days (gardabikehotel.com).

There are lots of routes up in the hills.

They are easily accessible and well signed, and a good way of avoiding the summertime lakeside jams. You can also take the ferry, which is what I do between Sirmione and Gardone before heading north to Limone for the final night.

But first I take in one of the most remarkable museums I have ever seen, recommended by a dear friend as a must. Vittoriale degli Italiani in Gardone is the former home of Gabriele D’Annunzio, the Italian poet, novelist and serial seducer.

He was also a war hero whose energy and romantic image was exploited by Mussolini to symbolise the flame of Italian fascism.

The house is a paradoxical shrine to tasteful kitsch, stuffed with classical figurines, chinoiserie and even a full-sized battleship in the stately garden.

I bid farewell to the lake over a Negroni sundowner in the Porto Vecchio, the bike safely shackled to a railing.

A fitting farewell to the great lake and a sad parting of the ways with the bike, to which I have become sadly attached.

Mark Porter is the author of Coast To Coast Cycle Routes (baytreepress.com).