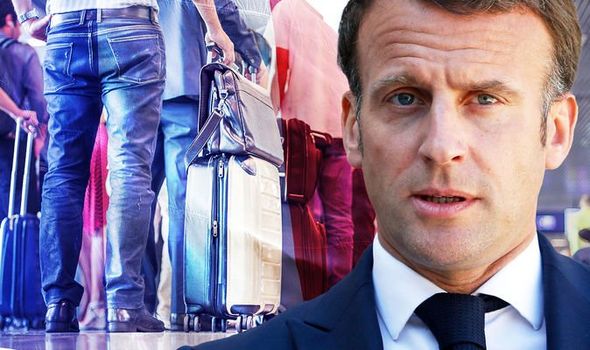 Returning travellers will need a negative test taken less than 24 hours before travel. According to French Government spokesperson, Gabriel Attal, travellers will have to have a compelling reason to be allowed to enter France.

People arriving from the UK will have to isolate at a location they choose and their isolation will end 48 hours after if they show a negative test.

According to the minister, only French citizens returning from the UK or British people living in France will be allowed to enter.

The rules follow growing fears over the transmissibility and danger of the Omicron variant which is spreading rapidly in the UK.

Gabriel Attal said a “more drastic border control” would be applied for travel between the UK and France.

Further details of the measures are expected to be announced by the Prime Minister’s office later on today.

It is likely that the new rules will impact British ski holidays and Christmas trips to France.

Those who are allowed to travel to France from the UK will have to be isolated for seven days unless they present a negative test.

If they test negative, they will likely be able to leave after 48 hours.

BBC reporter Simon Jones claimed that compelling reasons would now be needed to enter France from the UK.

The reporter said this was likely to include visiting family in France but no tourism or non-urgent work reasons.

He said the changes are due to be implemented on Saturday but the UK Foreign Office has yet to update its travel advice for France.

The UK reported more than 78,000 Covid infections yesterday, as cases reached the highest level since early 2020.

The Omicron variant is thought to be far more transmissible than previous variants of the virus due to its high number of mutations.

Since Wednesday, people aged over 65 in France will no longer count as fully vaccinated if they have not had a booster job.

This means they will not qualify for a French health pass unless they take negative tests every 24 hours.

The health pass is needed to enter hospitality venues such as restaurants and bars across France.