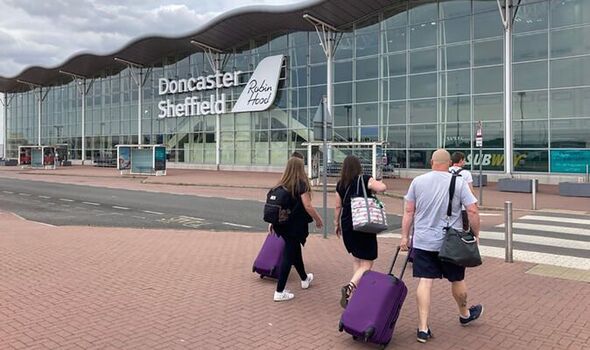 Tourists have vented their ire as Doncaster Sheffield Airport will close – leaving just one passenger airport to serve the whole of Yorkshire.

A new owner for the focus city for TUI was not found after a review into its future. The site typically handled around 1.4 million passengers every year before the COVID-19 pandemic and its closure will leave just Leeds-Bradford as the only passenger hub in Yorkshire.

Writing on Facebook, people reacted with dismay to the news.

One man, from East Yorkshire, wrote: “This is nothing short of scandalous. The government should compulsory purchase the airport.”

Another keen traveller, from Lincolnshie, said: “Whatever happened to levelling up? More like levelling down. This would never have been allowed to happen if it was an airport in the south of the country.”

A third stated: “Totally gutted this airport was fantastic to travel from.”

One woman, of Hull, shared: “How very sad. I used this airport loads. Gutted for passengers and staff.”

Wizz Air cut many of its routes from the airport in the summer and bosses feared aviation activity at the site “may no longer be commercially viable”.

Peel Group, which owns the airport, said the site will begin to “wind down” from the week commencing Monday, October 31.

Throughout its consultation process, Peel has been in contact with different airlines and other airport users but it still firmly believes that Doncaster Sheffield Airport is financially unviable.

“We recognise that this will come as a great disappointment to many,” said Robert Hough, chairman of Peel Airports Group.

“The intractable problem remains the fundamental and insufficient lack of current or prospective revenue streams, together with the airport’s high operating costs.

“Our employees have always been DSA’s greatest asset, and we are grateful to them all, past and present, for their dedication and diligence over the years. The immediate priority remains to continue engaging closely with them over the next few weeks.”

Steven Underwood, chief executive of Peel Group, added: “We recognise that we are living in uncertain times, and we understand that our announcement will be difficult to hear for the Doncaster and wider South Yorkshire communities in which we have worked and invested for over two decades. However, as has been seen many times before in industries undergoing structural change, although change brings uncertainty it can also bring significant opportunity.

“As the Strategic Review concludes, we look forward to collaborating with our partners to create a vibrant, long-term vision for GatewayEast and the airport site. We will not accept any public sector grant to cover the costs of an airport that is not viable due to its lack of adequate forward revenues and high operating costs. Accepting funds from SYMCA may postpone the inevitable for another thirteen months, but it will divert funds away from services on which communities throughout South Yorkshire rely.

“Instead, we intend to continue working closely with local and national stakeholders to develop a forward-thinking strategy for the airport site, in conjunction with the £1.7 billion GatewayEast development next door, to help unlock vibrant, job-creating alternatives to ensure future growth and prosperity. We have the potential to attract cutting-edge, future-tech businesses to South Yorkshire, but only if we are able to collaborate with our local stakeholders and community in South Yorkshire.”