On the Shetland Islands, a local pub has become the focus of attention on Google Maps Street View thanks to some rather well-known visitors. The group of recognisable characters was spotted enjoying what appeared to be an overcast day.

The scene unfolds outside of a rustic, countryside pub.

A huge sign above the door reads “Pierhead Restaurant and Bar”.

The local boozer is housed in an old, stone house surrounded by the rolling hills and stunning greenery of the region.

A long country road winds its way down through the hills toward the pub, with traditional dry stone walls lining either side. 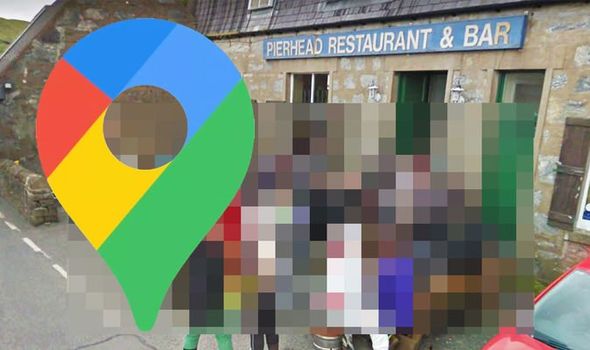 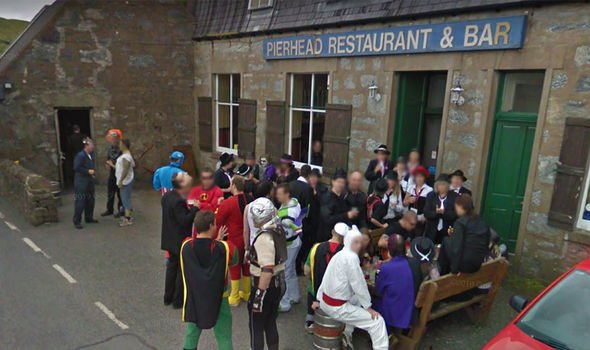 Directly in front of the pub is a car park, which is jam-packed with vehicles, proving this is clearly a popular area.

Perhaps this is due to the stunning vistas over a glassy lake that stretches out in front of the building.

Much like the majority of the Shetland islands, however, this is a pretty remote area.

Just one White House appears to be nearby, with an array of buildings appearing minute in the distance.

Maybe this is why no one but the Google Maps car reported the sizeable crowd of notable people who decided to enjoy a drink on this grey day.

Outside of the pub, the crowds can be seen sitting on tables and even using beer barrels to make up for the lack of seating.

Others sit on the old stone walls or stand around chatting.

Among them appears to be a collection of stars you might have seen in the movies. 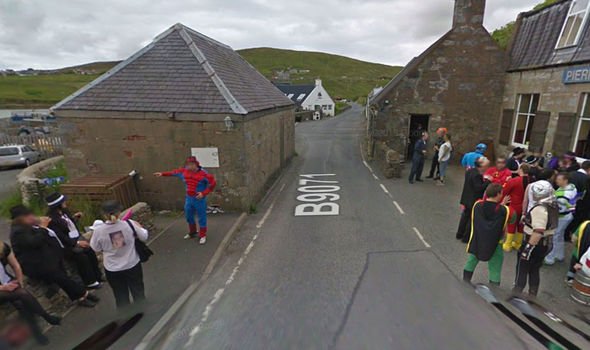 Spiderman stands to the left of the road, seemingly accompanied by some gangsters, much like Tony Soprano himself.

On the right-hand side of the road Mr Incredible, Robin (of Batman and Robin), The Jokes, and even Buzz Lightyear can be seen within the huddle of people.

For the most part, the crowd seems to be made up of Hollywood favourites.

While it might be exciting to think these make-believe characters had come to life for a knees-up, there is likely a more realistic explanation.

According to the user who shared the scene to Reddit, this is a “costume party”.

Though it is not clear why the people have chosen to dress up, it is clear they are celebrating something.

What’s more, the type of characters on display suggests some kind of film theme.

The scene was captured by one of the special 3D cameras which are attached to the roof of cars and driven round towns and cities across the world.