The FCO has also issued an exceptional travel advisory notice.

It reads: “As countries respond to the COVID-19 pandemic, including travel and border restrictions, the FCO advises British nationals against all but essential international travel.

“Any country or area may restrict travel without notice.

“If you live in the UK and are currently travelling abroad, you are strongly advised to return now, where and while there are still commercial routes available. Many airlines are suspending flights and many airports are closing, preventing flights from leaving.”

The announcement follows a series of stringent border lockdowns and strict measures in countries across the world in a bid to tackle the coronavirus outbreak. 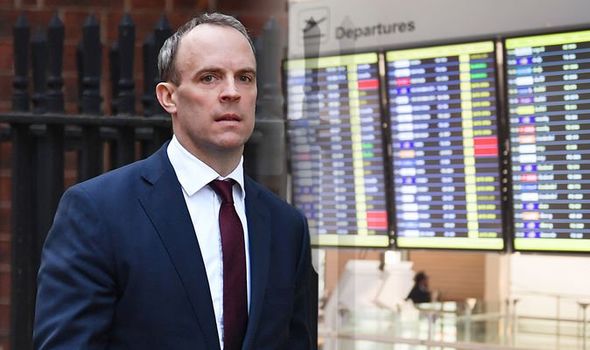 From France to the USA, local residents are being confined to their homes, allowed only to leave to collect essential items and medicines. Meanwhile, the global number of confirmed cases has risen to 368,936.

Many fear of the strain this will put on both the healthcare systems across the globe, but also the economy as a whole, with most governments asking all but key workers to remain at home for the time being.

However, as the virus spreads and countries put in place tighter measures, many airlines are cancelling flights leaving Britons fearful of becoming stranded.

UK airlines including easyJet, British Airways and Ryanair have all cancelled a huge portion of their services.

Meanwhile, the United Arab Emirates have halted flights to and from the country for two weeks, and Singapore and Taiwan have banned transit for foreign travellers.

The European Union (EU) has suggested that all non-essential travel should be suspended to the EU for 30 days.

The USA has banned foreign travellers from crossing its border, including putting a ban in place for all nonessential travel across the US-Canada border.

Many other countries have banned European travellers from crossing their borders, and others have a 14-day mandatory quarantine period in place for any new entrants to the country.

With so many walls going up which could cause problems for UK travellers, what can Britons do to ensure they get home?

The first thing travellers should do is contact the airline they have their return flights booked. They should advise on when they can be repatriated home, and if they are able to do so imminently.

“If you know that the government of the country you’re in is banning international flights in two days time just get online and get a flight,” urged Calder.

“In extremes go to the airport and see what you can find.”

He did point out, however, that passengers may have to foot any additional costs themselves if their airline is not able to help them or if they did not have a return flight booked.

In a gloomier outlook, Mr Calder said those who are stranded should “assume you won’t get any help from your airline, travel insurance company or embassy”.

“You have to make decisions now, there’s no time to lose,” the expert warned.

“Spend what you need to, get family and friends to pay for your ticket – just get yourself out and then ask questions later.”

The travel guru went on to say that many embassies are not equipped to deal with the vast number of requests they are getting from stranded nationals.

“The systems we have in place were never designed for the worst emergency that’s ever happened in travel.”