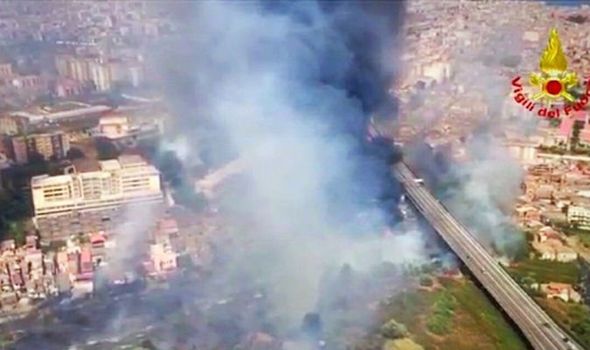 A wildfire in the surroundings of Catania Airport, in Sicily, started last night leaving hundreds of tourists trapped in the island.

As the fire has been impossible to control, hundreds of tourists had to be evacuated and all the flights were cancelled, leaving many British holidaymakers trapped there.

At the time of writing, the fire hasn’t yet been extinguished.

Catania is the main airport on the island.

At the moment, all flights arriving in Sicily are being diverted to other airports nearby.

It is expected no flights will be departing from the island today.

It read: “Due to the strong fires that are in the area adjacent to the airport, Catania Airport was forced to suspend flight operations.

“Inevitable delays and possible diversions on arriving and departing flights.”

The most affected area is Fossa Creta where families have been forced to leave their homes.

Most roads are currently closed.

The fire has also destroyed part of the seafront in the town of Plaia, leaving shocking images of the remains of the popular Italian beach.

Some houses in Palermo were hit by flames and had to be evacuated.

The fires are mainly located in the touristy areas of Palermo, Messina, and Catania.

The high temperatures and hot winds are making it even harder to extinguish.

The fire has already burnt over 2,000 acres.

Firefighters are working on the ground and water carry planes have been deployed.

The mayor of Piana degli Albanesi, Rosario Petta, said: “This year we have reached unprecedented levels of devastation.

“Criminal action, given that the triggers are on several points.”

Heatwaves are expected to hit Sicily in the next few days.

the regional Civil Protection has issued a “red” level 3 alert for Catania, Messina and Palermo, and a “heatwave warning” for the rest of Sicily until 6 August.