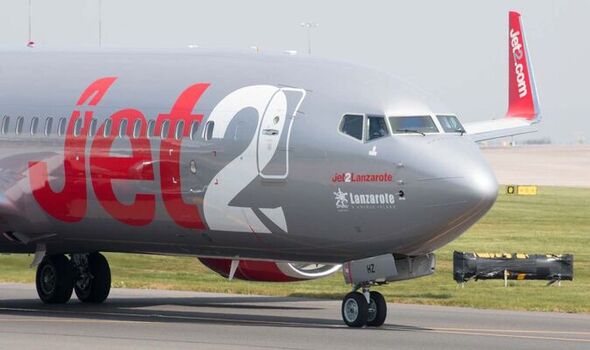 Violet Wilkinson, 65, had just enjoyed a sunny holiday in Gran Canaria when her Jet2 flight was diverted from its destination of Newcastle to Porto on Sunday night. The flight LS542 passenger told Mirror Online the flight had to make an unscheduled landing in Portugal due to a ‘disruptive passenger’.

She claims the passenger was ‘visibly drunk’ and ‘should not have been allowed to board in the first place’.

She says she felt stuck in ‘limbo’ after her flight was forced to land 1,100 miles away from home, leaving her stuck for 24 hours. The flight, which had taken off at 9.30pm on Sunday, had been scheduled to arrive at Newcastle at around 2am on Monday. However, the flight was diverted due to the airline’s zero-tolerance approach to disruptive passengers.

Violet, from Newcastle, describes how she was left in ‘no man’s land’ after they deplaned and were stuck in the airport overnight without any communication about what was happening. Speaking to the Mirror, she said after being stuck in the airport until 7am local time on Monday, passengers were ferried out to a hotel 45 minutes away to freshen up before returning for a new flight at around 9:30pm.

She said she didn’t land in Newcastle until after midnight on Tuesday.

Violet says she heard from other passengers who saw two men in the Spanish airport before boarding the plane.

She claimed: “I heard from other passengers that apparently they were drunk.

“A lot of people were saying they shouldn’t have been allowed on the aircraft because other passengers had seen them rolling around the floor in the airport bar and that they poured their vodka into water bottles.”

She said two passengers behind her got into an altercation and the stewards tried to separate them with the drinks trolley as they were sitting opposite each other. She says they were taken to the back of the plane but were forced to divert when things didn’t calm down.

Violet said they were in the air for about an hour trying to find somewhere to land and eventually made it to Porto. She thought they were going to take off shortly after police escorted the men off the flight, but because the crew’s shifts had ended and Newcastle’s airport would be closed by the time they got there, they had to deplane.

Violet said: “It was a bit like the film Terminal – we were in limbo…we couldn’t get our baggage – they left it on the plane. We couldn’t go through passport control and we had no water, there was nowhere to sit, people were sitting on the floor and other people were standing. There were children crying. There was nothing provided – no refreshments.”

She added: “We were in this holding area until about 7am and we then finally went through got our suitcases and went through passport control.

“We were led like a flock of sheep just following each other and taken to an underground car park where the coaches were.”

She says they were driven to a five-star hotel about 45 minutes away where everyone was given a room and told they would be picked back up at 5.30pm to be taken back to the airport.

Violet feels she and her fellow passengers were left in the dark by the airline.

She said: “What I felt is that we were punished and the actual perpetrators weren’t. They would have been taken to the station and given a pillow, food and a cell. That is what was really unfair.”

She also says that airports need to do something for passengers who end up in this situation when a flight has been disrupted. She added: “Airports have done nothing to support the situation for the people who have been left on the aircraft. They have a room with setees or small beds for children and some water and juice and snacks. We felt like aliens which is what we were.”

A Jet2 spokesperson said: “We can confirm that flight LS542 from Gran Canaria to Newcastle diverted to Porto this morning so that a disruptive passenger could be offloaded.

“As a family-friendly airline, we take a zero-tolerance approach to disruptive behaviour. We will not hesitate to vigorously pursue any costs incurred as a result.”