Official: It’s the best pub crawl ever! Taking a guided tour of London’s most historic boozers

You might think this fine old British tradition had gone the same way as red telephone boxes and village post offices.

So to discover a pub crawl flourishing in the heart of London, showing tourists Britain at its eccentric best, brought a warm glow to the cheeks of this lifelong aficionado of public houses.

On a recent top-25 list of the world’s best tourist attractions, compiled by TripAdvisor, staggering in, bleary-eyed in 18th place, was a guided tour of London’s historic pubs run by an outfit called Liquid History Tours. 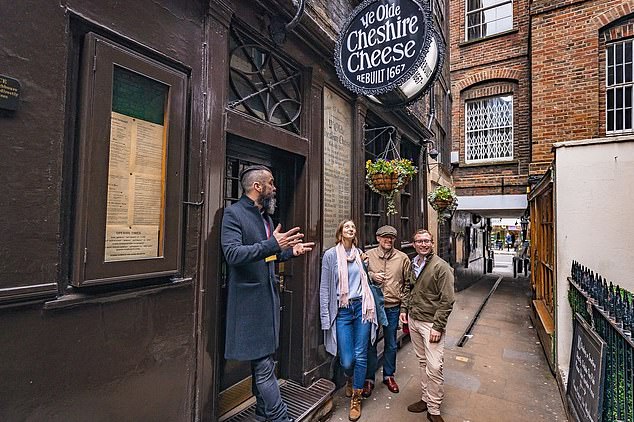 That drinking feeling: The tour turns up outside the famous Ye Olde Cheshire Cheese pub

There’s nothing to it really. You just meet up with your fellow topers at 2pm outside St Paul’s Underground station and, for the next three-and-a-half hours, zigzag across London, stopping for 20 minutes at a series of carefully selected pubs, all steeped in history.

‘Today, it will be the Black Friar, Ye Olde Cheshire Cheese, The Ship, the Old Bank of England and the Seven Stars,’ says our guide for the day, Will, a grizzled Londoner who seems able to draw on a bottomless well of knowledge about the capital. ‘

This way!’ And off we trot, 15 of us in all, with Australians and Americans leading an impressively cosmopolitan field.

‘How much do people drink on the tours?’ I ask Will, as he breaks off from a learned spiel about Shakespeare’s London to usher us into the Black Friar, an art nouveau classic built on the site of a medieval Dominican friary.

Depends. Some stick to water. They are more interested in the history than the drinking. Others really enter into the pub crawl spirit. So a pint in every pub, five pubs…’

Water or beer? It’s a no-brainer, particularly as the Australian in front of me has ordered a pint of bitter. I am not going to be out-drunk by an Aussie.

We start joshing about cricket while Will enlightens a couple from Massachusetts about Sir John Betjeman, the Poet Laureate who spearheaded the campaign to save the Black Friar pub when it was threatened with demolition.

And so the long afternoon wears on. A drink, a short stroll, another drink, another short stroll. My drinking companions seem increasingly delightful with each pub we patronise. 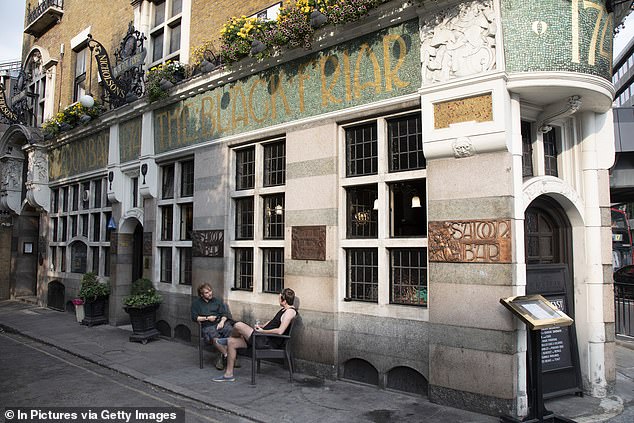 The Black Friar, another pub that is on the tour. The Daily Mail’s Max Davidson joined the tour and found it showed Britain at its eccentric best

At 2.30pm, I am still cold-shouldering an American couple who are staunch Trump supporters. By 4.30pm, I am happily buying them a drink. All is forgiven.

But it is the pubs, as much as the people, which are the star attraction of this tour. The area through which we are happily gambolling must be richer in history than anywhere else in Britain, if not the world.

All around us are the ghosts of London past, from Shakespeare to Dickens, from Sweeney Todd to Samuel Johnson, from Fleet Street hacks having boozy long lunches to generations of bewigged barristers ducking into the Seven Stars at the back of the Royal Courts of Justice.

The Seven Stars survived the Great Fire of London in 1666, and is now run by the redoubtable Roxy Beaujolais, who could have put out the fire by herself with her caustic humour. Just another London legend to add to the list. 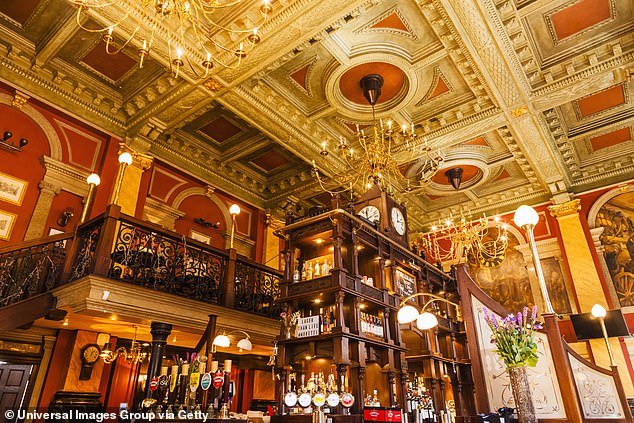 The bar inside the Old Bank of England pub on Fleet Street, one of the stops on the pub tour

Of the five famous boozers we visit, my favourite one is Ye Olde Cheshire Cheese, around the corner from Dr Johnson’s old house.

Writers from Dickens to Mark Twain and P.G. Wodehouse have patronised the pub — as well as generations of journalists in Fleet Street’s newspaper days. No wonder its parrot Polly became a legend and was the subject of national newspaper obituaries on her death in 1926. There is now a stuffed parrot behind the upstairs bar. Cue my Monty Python dead parrot sketch to the baffled assembled crowd.

But London is not the only UK city where escorted pub crawls can introduce visitors — and locals — to this much loved part of our national heritage: