Mysterious creatures, hooded figures and ‘babies’ crawling up and down a tower: Mesmerising images of Prague’s fascinating rooftop statues and sculptures

Prague has lots to offer at street-level – and plenty, it turns out, to fascinate a bit higher up.

Top photographer Amos Chapple has taken a set of fascinating photographs of the city’s (mostly) rooftop statues and sculptures, from the beautiful to the bizarre and from the elegant to the grotesque.

He’s a New Zealander, but has lived in Prague since 2016 – and the lockdown prompted him to explore the city’s elevated realms.

He discovered statues of hooded warriors and strange baby sculptures ‘crawling’ up and down the stem of the city’s tallest structure.

He told MailOnline Travel: ‘Like everyone else, I got locked inside, so could only explore the city I live in. This was a genuinely awesome little adventure studying the rooftops of the city for these characters – mostly elegant, sometimes grotesque, always interesting.’

Scroll down for some seriously high-level photography. 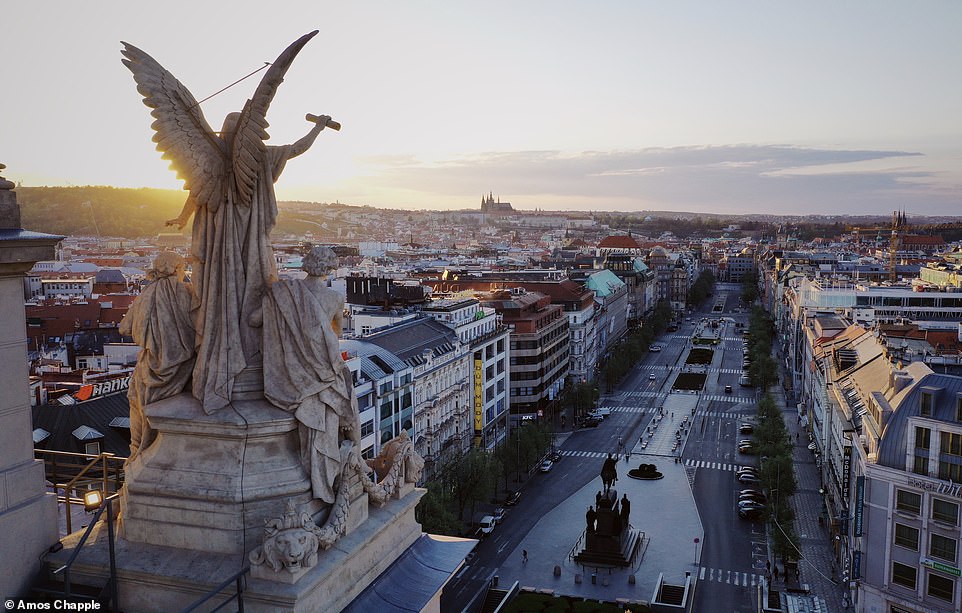 A winged figure on the National Museum by Bohuslav Schnirch looking down Wenceslas Square. In 1968, invading Soviet-led forces fired hundreds of heavy machine-gun rounds from the square into the museum’s facade, explained Amos, leaving it pocked with bullet holes until 2018, when the building was renovated 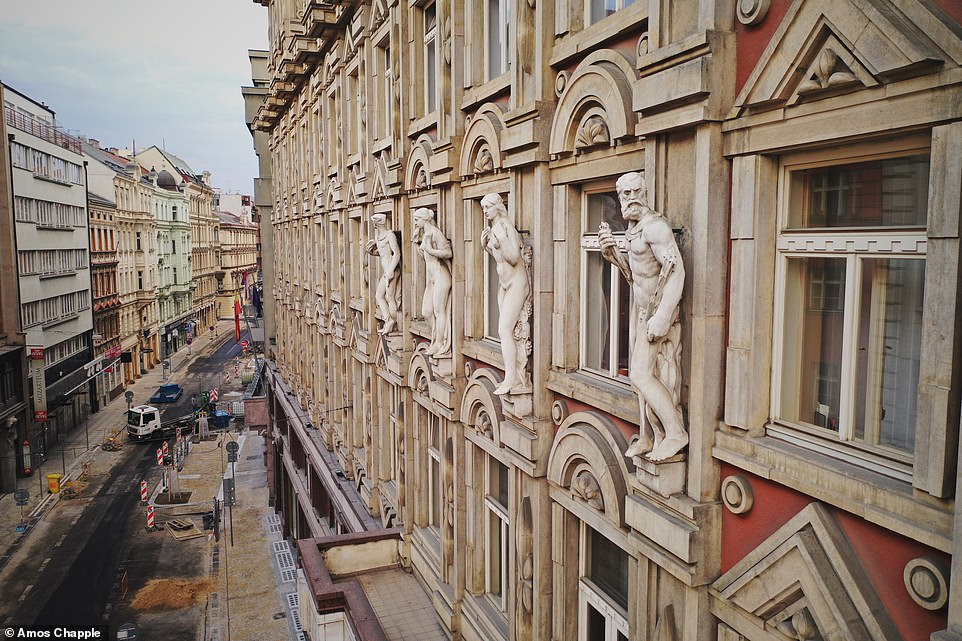 ‘The lone male figure on the facade of the Adria Palace staring daggers at the camera,’ says Amos’s caption for this image 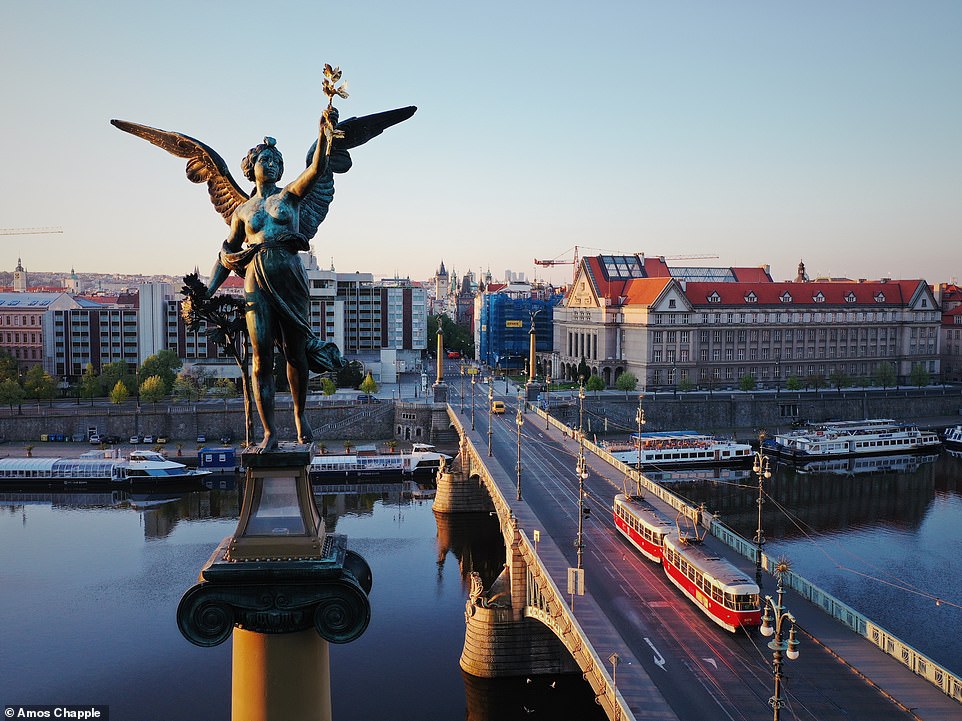 Morning light on one of four winged female figures cornering the Cechuv Bridge. The figures, which hold gold-plated wreaths aloft, were made by Antonin Popp (1850–1915), explains Amos 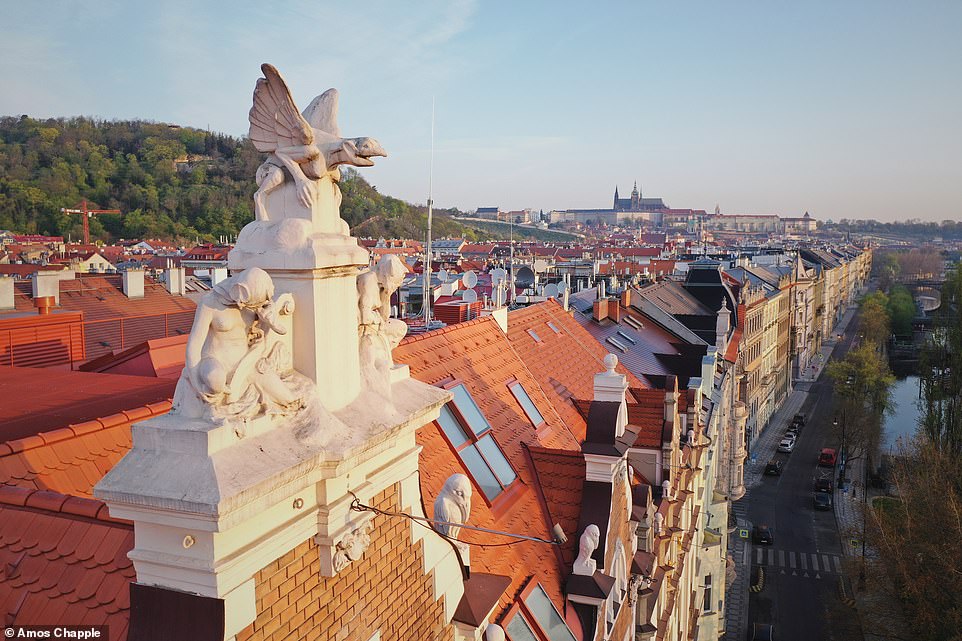 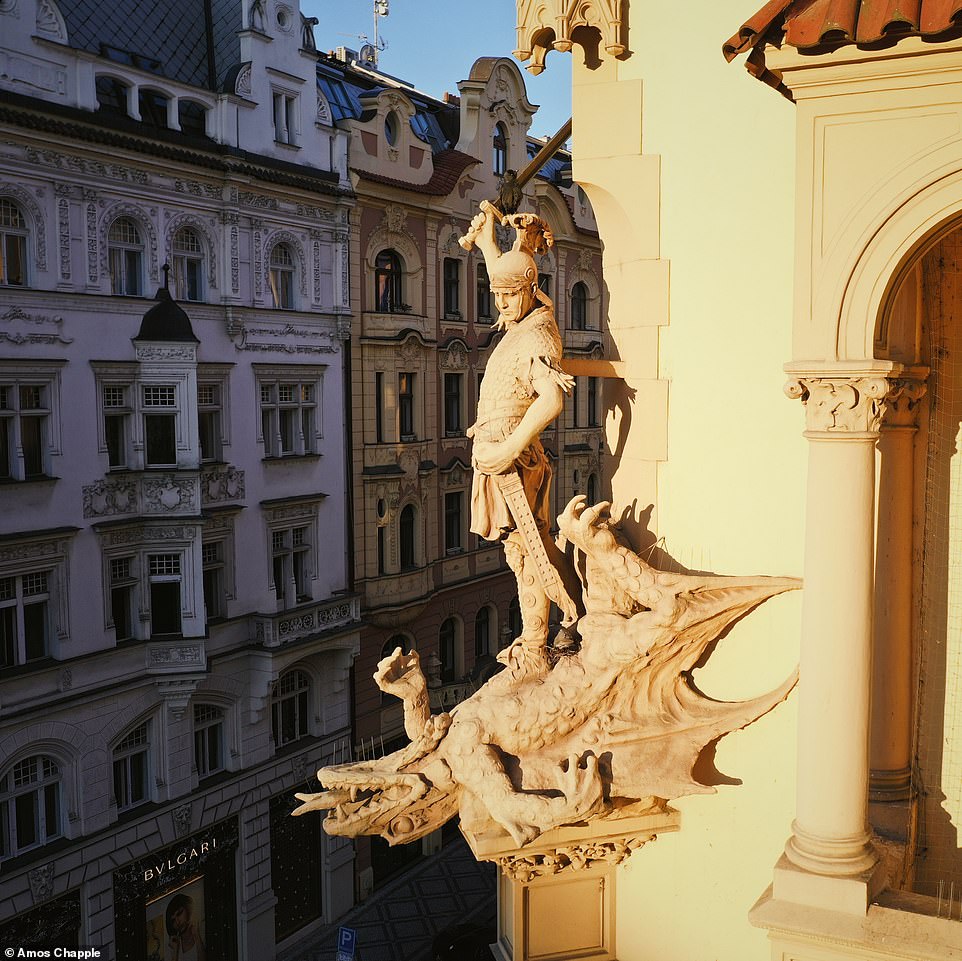 St. George slaying the dragon on a corner of a building on glitzy Parizska Street, near Old Town Square 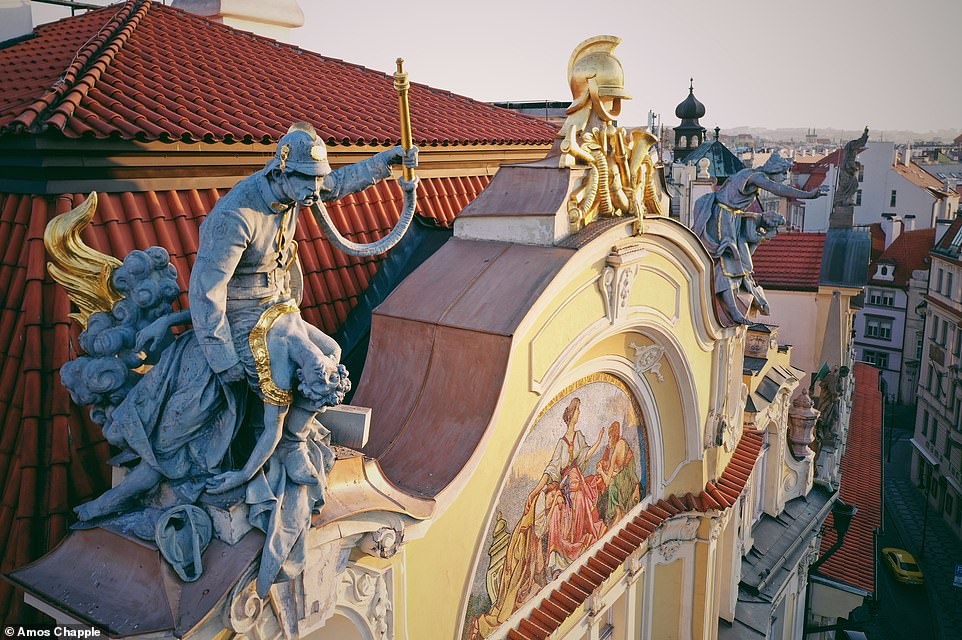 A firefighter depicted rescuing a woman from golden flames on the roof of the old Prague Insurance Company building on Prague’s Old Town Square. The epic sculpture was one of the last works of Czech sculptor Bohuslav Schnirch before his death in 1901, explains Amos. He told MailOnline Travel that the level of detail in some of the statues really surprised him, with this statue being one example. He said: ‘That swirling smoke and the golden flames are not even visible from the ground, yet the Czech artist poured his heart into those details knowing full well it would be admired only by a tiny handful of people who somehow got to see the statue up-close’ 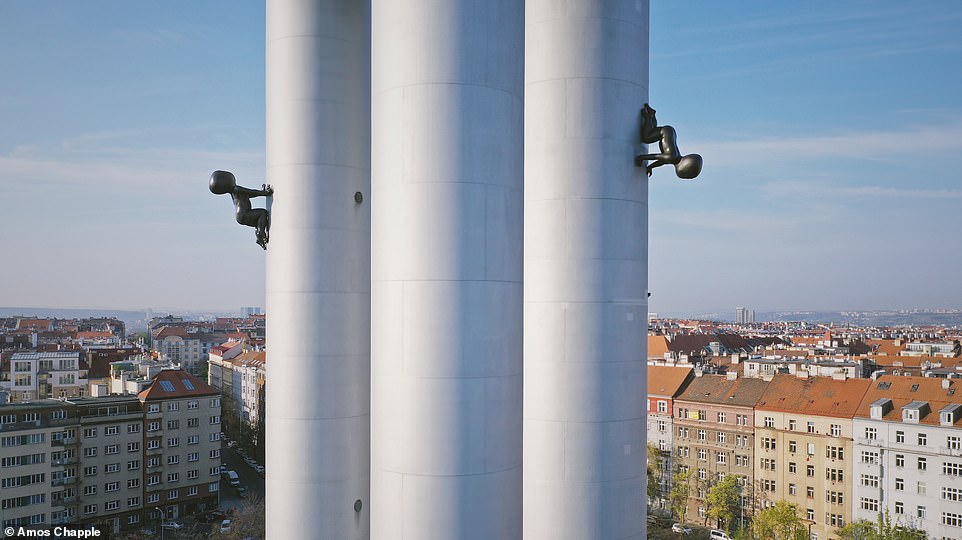 Black babies clambering on the stem of the Zizkov Television Tower, which at 706ft (216m) is the tallest structure in Prague. Amos says: ‘The 3.5-metre-long babies were made by contemporary Czech artist David Cerny. Each of the barcode-faced infants (yep, look it up if you’re not squeamish) weighs around 250 kilograms’ 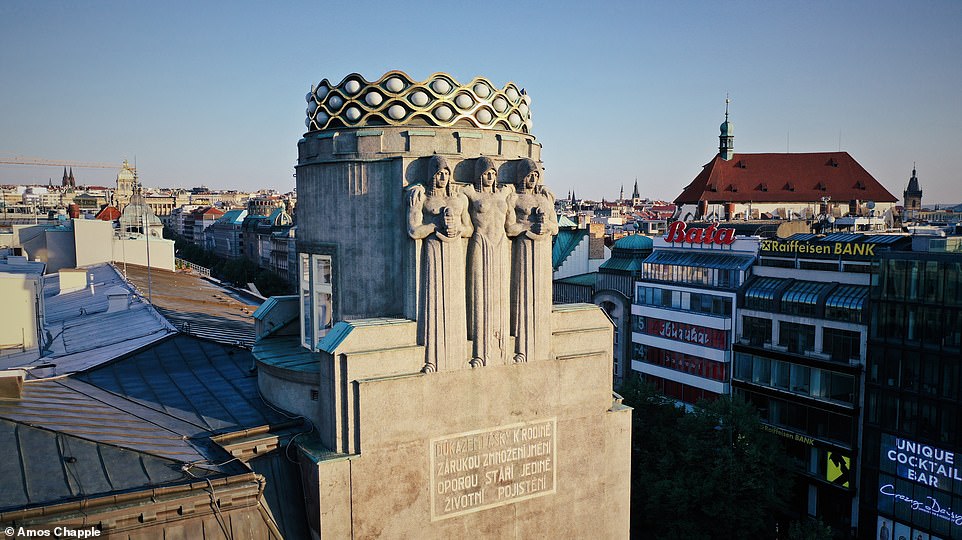 This statue depicts a woman flanked by two hooded warriors on the corner of the Koruna Palace, constructed by a life insurance company in 1914. The stone relief is by Stanislav Sucharda (1866 – 1916), according to the Koruna Palace website (though one commenter on Facebook disputes this and says it’s by Vojtech Sucharda). Either way, this is Amos’s favourite statue. He said: ‘Czechia is a country that literally fought its way into existence in the 1910s against the Austro-Hungarians, then fought the Nazis and the Soviets to become the free country it is today. So that image of the woman flanked by swordsmen is, to me, so symbolic of what the country represents – an amazing culture preserved by its warriors through some of the darkest moments of history’ 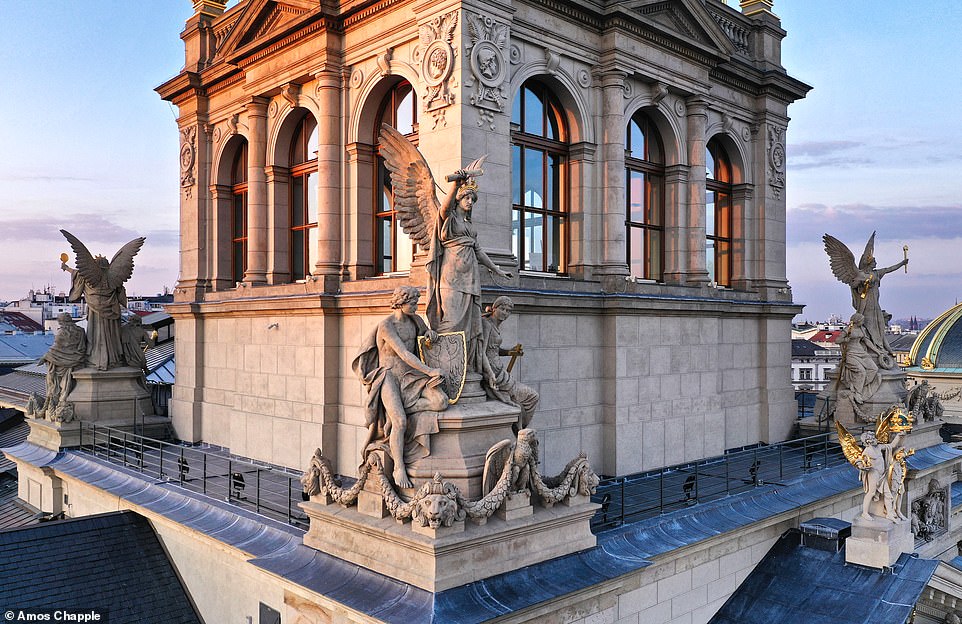 Figures on the roof of the National Museum by Bohuslav Schnirch which, according to Facebook commenter Marek Bany, ‘depict the four qualities which stood at the founding of the Museum – dedication, enthusiasm, love for past and love for truth’.  He adds: ‘They also have details representing the four elements – earth, water, fire and air’ 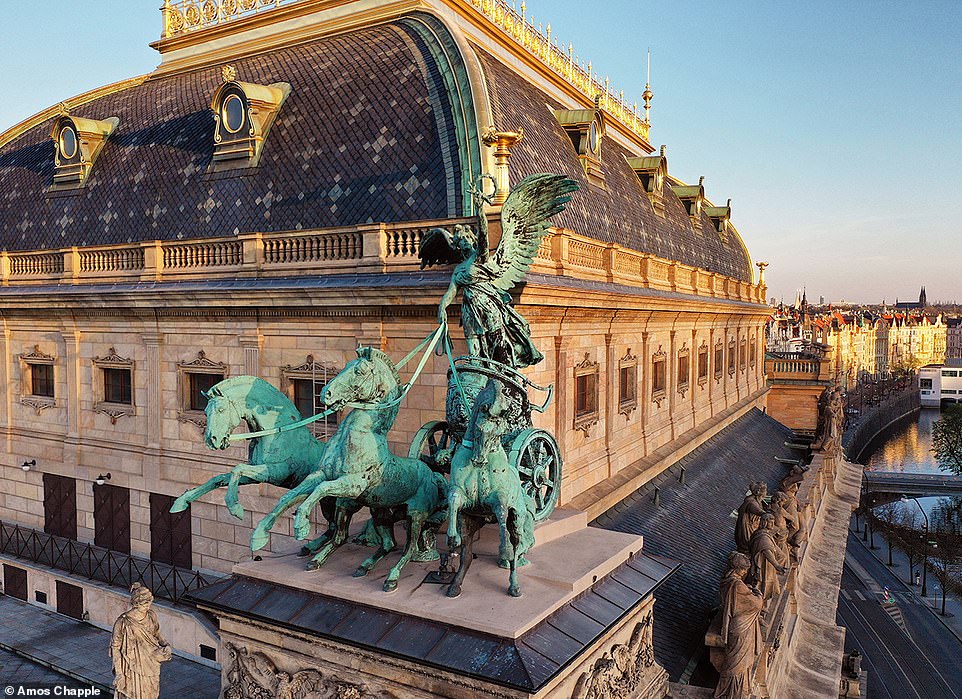 Nike, the goddess of victory, shown driving three horses from a chariot on the corner of the National Theater. Amos explains: ‘The iconic rooftop statue is, in fact, a copy of the original. Right after Bohuslav Schnirch completed the theatre’s bronze sculptures after years of work, he watched them destroyed by a fire in 1881. The copies that ride above the theatre today were installed on the repaired building in 1911, a decade after Schnirch died’ 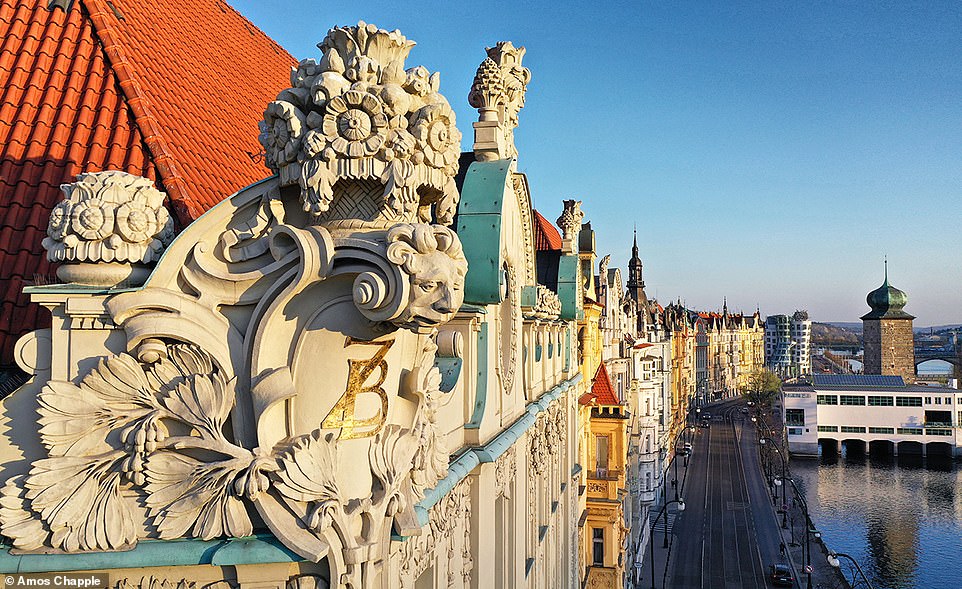 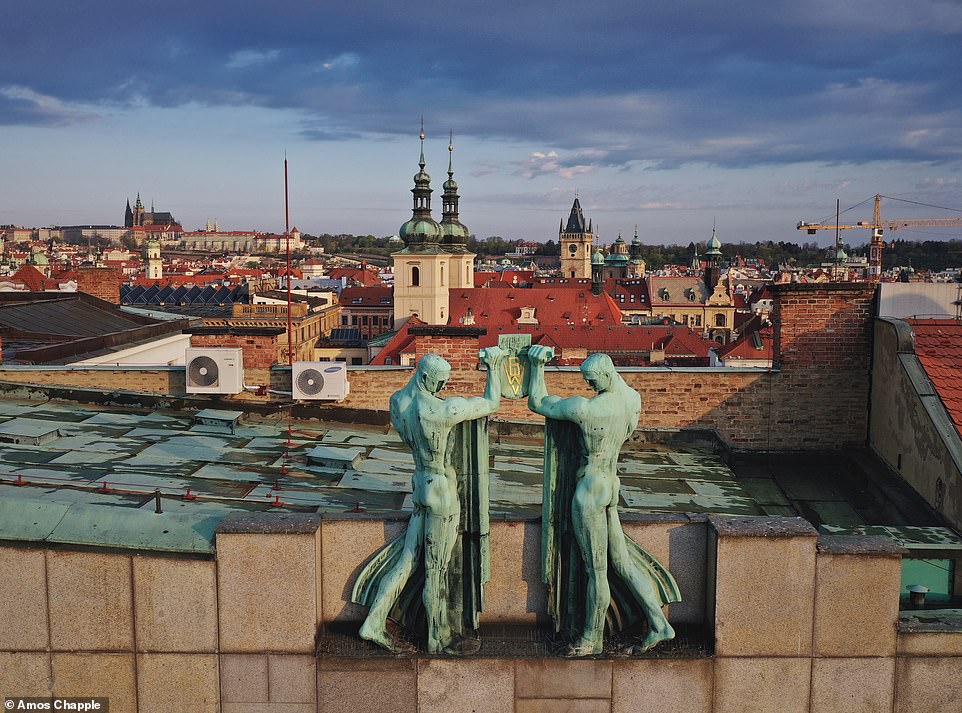 Amos posted his photographs to his Facebook profile, along with descriptions. He was unable to identify these statues, but user Marek Bany could, and explained in a comment alongside the image that the statues were by sculptor Franz Metzner (1870-1919). The building, he said, was previously owned by Wiener Bankverein, which would explain the WB symbols. He added: ‘The four statues might symbolise four elements – yes there is another pair on the building – since they are similar to other works by the author symbolising the elements’ 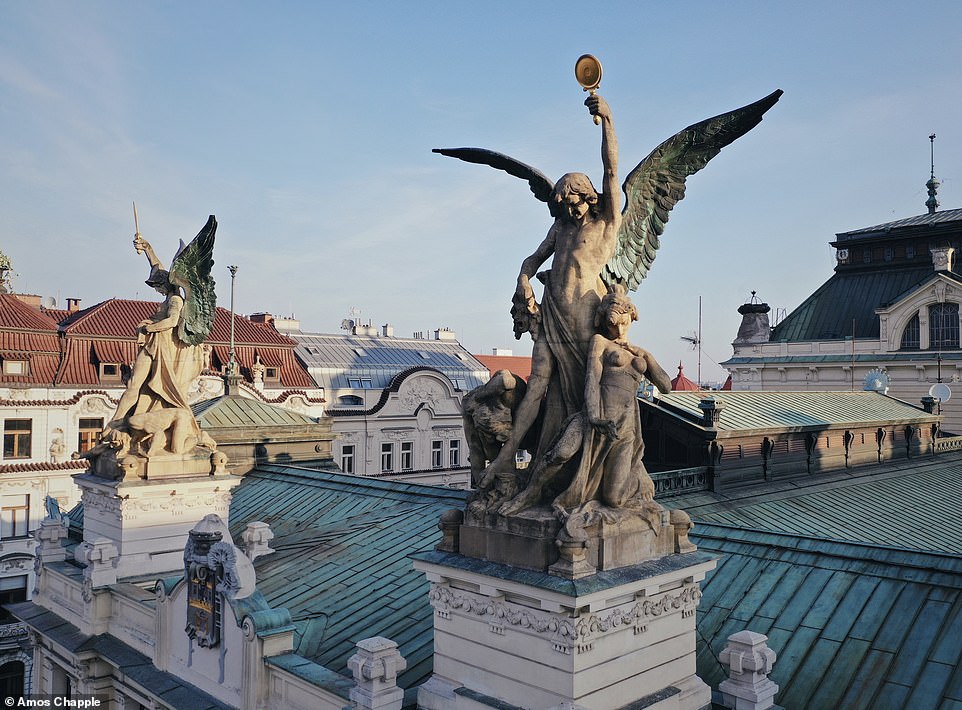 Figures above the Vinohrady Theater by sculptor Milan Havlicek (1873-1917) 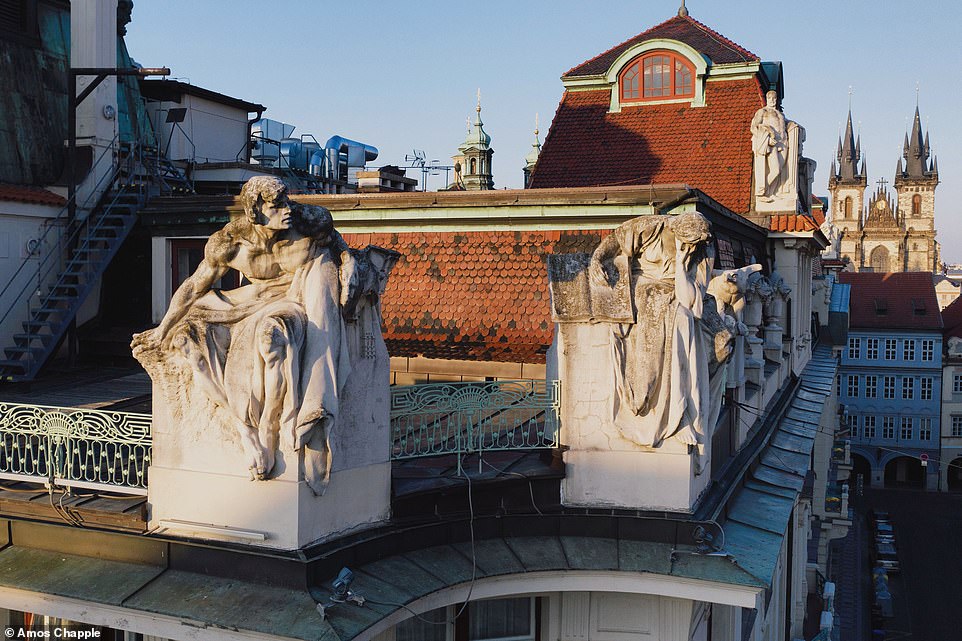 Sculptures by Ladislav Saloun (1870-1946) on the corner of the capital city’s New City Hall. Saloun also made the famous memorial to Jan Hus on the Old Town Square, Amos revealed 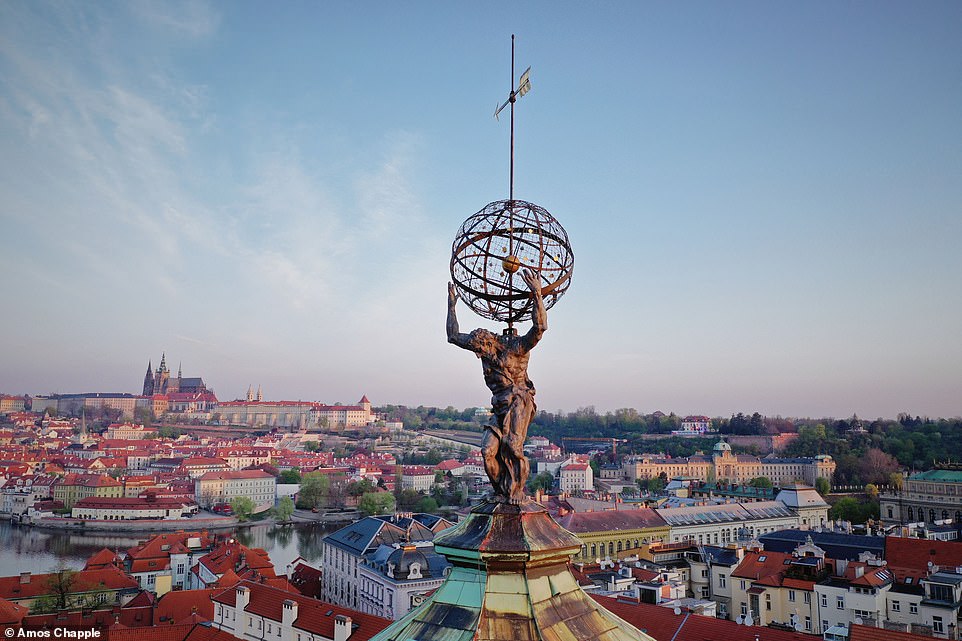 A monument to Atlas holding up the ‘celestial sphere’ atop the Clementinum, an ancient cluster of buildings that includes a working meteorological station in use since 1775. The Atlas statue was made by Matthias Bernard Braun (1684-1738), who also made several of the sculptures on Prague’s Charles Bridge. Amos told MailOnline Travel that this is one of his most surprising finds. He explained: ‘The fact that the statue of Atlas wielding the heavens dates back to the 1700s just blew my mind when I was researching these characters. That figure has stood there as war, revolution and natural disaster have stomped through the streets of Prague. As a New Zealander that depth of history reinforces why I love, and feel so lucky to live here in Czechia’ 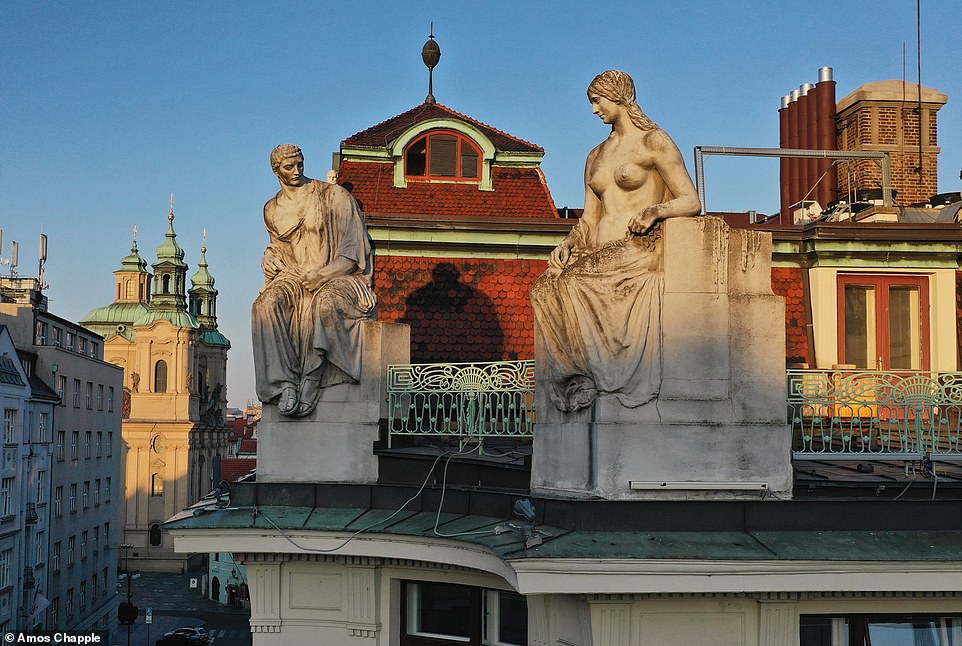 Amos’s caption for this image reads: ‘Sexual tension much? Sculptures by Ladislav Saloun on a corner of the New City Hall’ 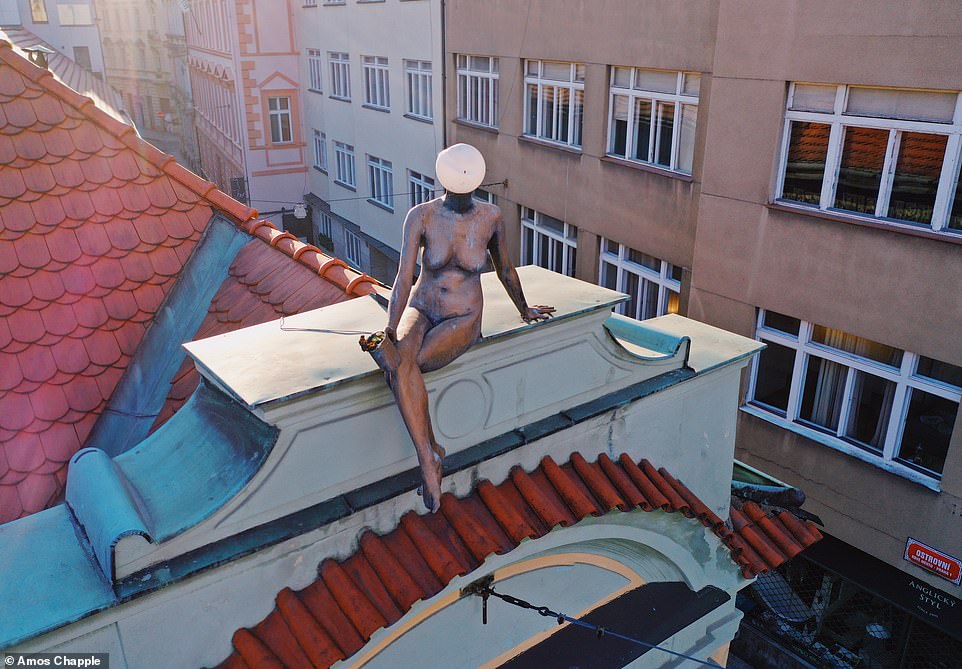 Amos’s caption for this reads: ‘A lamp-headed statue (modern Czech art can be weird) on the roof of the Deym Palace’ 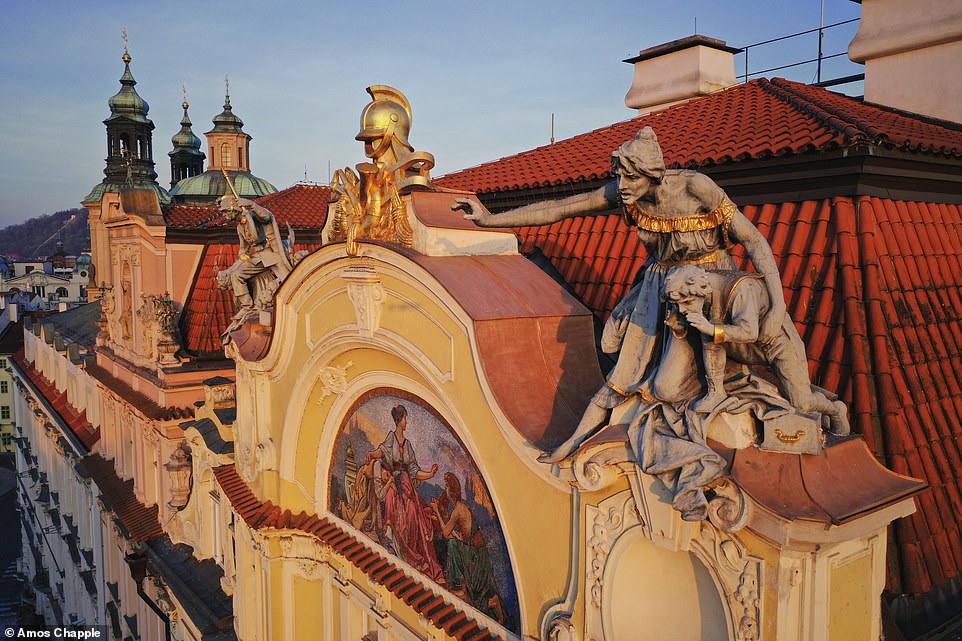 The second figure on the roof of the old Prague Insurance Company named ‘call for alarm’, apparently showing a woman and child alerting people to a fire, says Amos. He adds: ‘The sculpture was unfinished when its creator, Bohuslav Schnirch, died. It was completed by his apprentice, Ladislav Saloun’