Standby, we are going to take you back in time.

Architects and engineers have deployed digital wizardry to show what several endangered Unesco sites would have looked like had they been fully preserved – to highlight their significance and underscore their sheer majesty.

Scroll down to see the incredible digital makeovers, from the spectacular ancient Syrian city of Palmyra to the sacred Old City of Jerusalem…

The Old City of Jerusalem and its walls 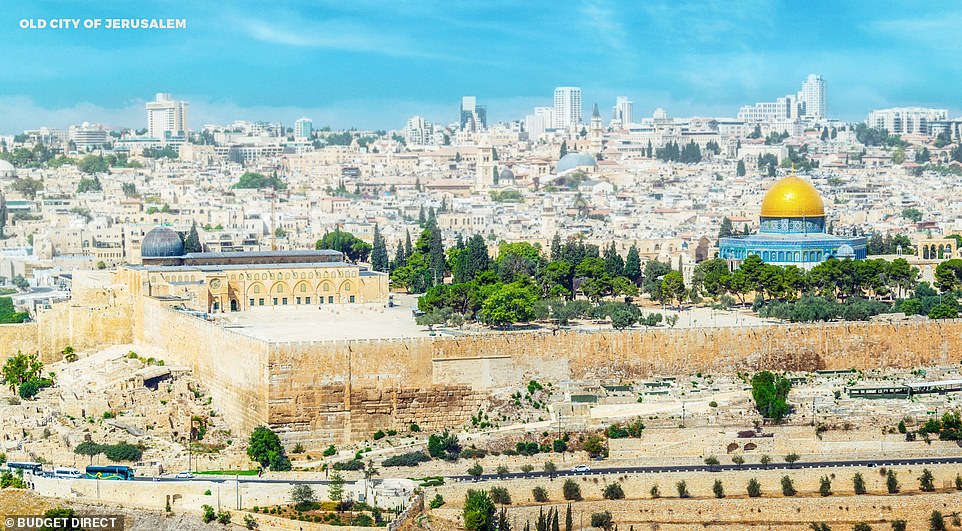 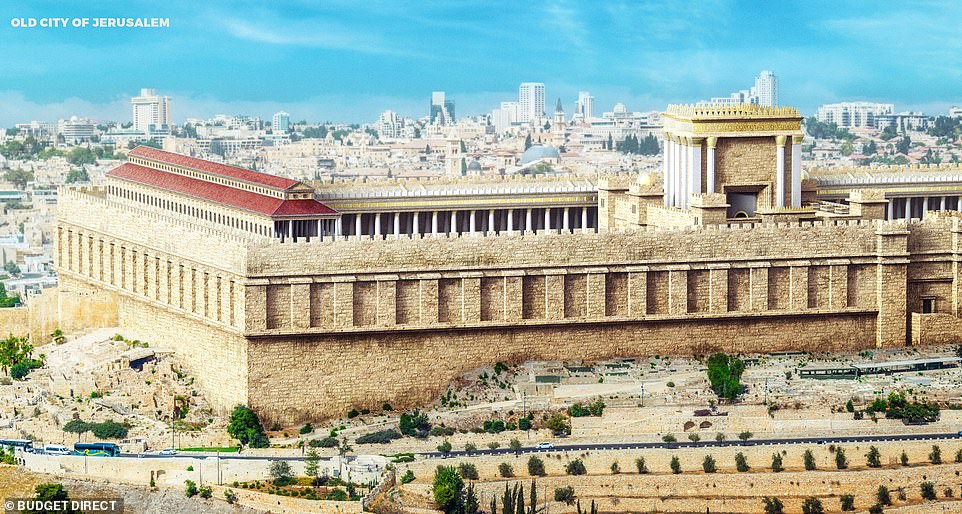 The digital wizardry deployed here shows us how the south-east corner of the Old City of Jerusalem would have looked during the time of Jesus – when the magnificent Second Temple stood there.

It was built on the orders of King Herod – an epic refurbishment of its predecessor that began around 20 BCE and wasn’t finished until around 62 to 64 CE. The local population didn’t have much time to admire its majesty, though, because a Roman army under the command of future Emperor Titus destroyed it in 70 CE.

Today the area once occupied by the Second Temple – Temple Mount – is home to the beautiful Al-Aqsa Mosque, the third-holiest site in Islam, for it’s here that the Prophet Muhammad is said to have ascended to heaven.

All that remains of the Second Temple is the Western Wall – the holiest site in Judaism, the place that’s closest to the former Holy of Holies, the inner sanctuary of the temple said to have held the Ark of the Covenant.

The old city and its walls – which run for 2.5 miles and largely date back to the 16th century when it was under Turkish rule – have been on Unesco’s ‘in danger’ list since 1982, due to ‘severe destruction followed by rapid urbanisation’. 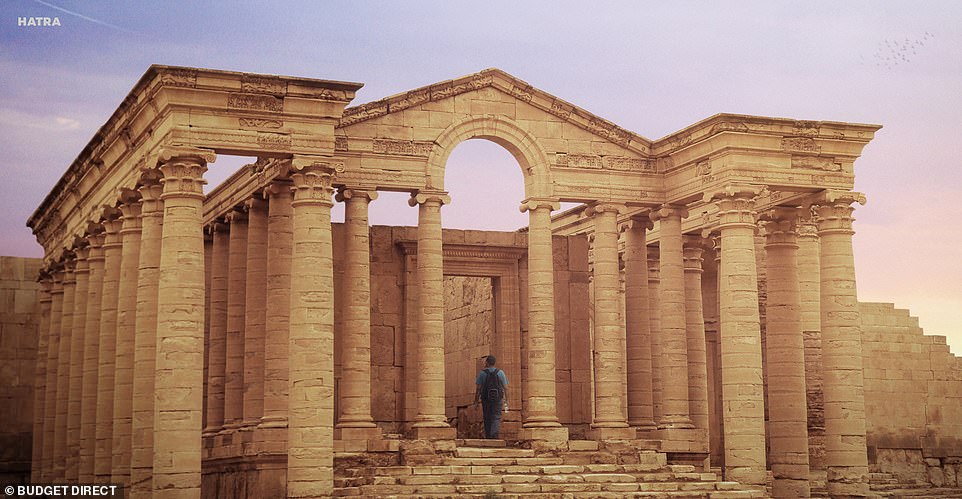 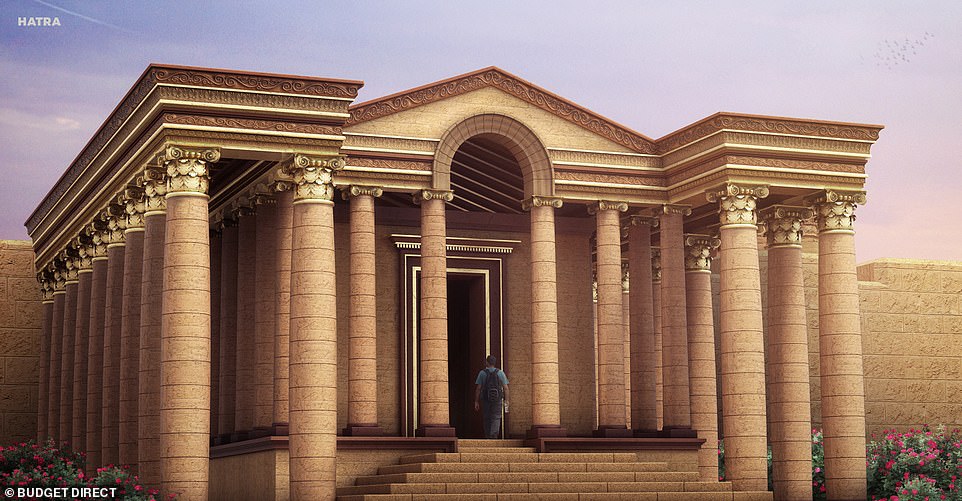 The temple after being digitally restored by a team of architects and engineers. Hatra was known for its multitude of temples

Hatra was a large fortified city, the capital of the first Arab kingdom, built between the second and third century CE in what is now modern-day Iraq.

Its inner and outer walls had a circumference of nearly four miles and it was known as the ‘House of God’ due to its temple enclosure, which covered some three acres. The Mrn Temple is what has been digitally reconstructed here.

The city of Hatra was destroyed in 241CE and its ruins weren’t discovered until the 19th century. It was marked as an at-risk site by Unesco in 2015 after ISIS vandalised some of its sculptures using sledgehammers and machine guns. The militant group ran a shocking propaganda campaign that saw them destroy ancient relics they claimed promoted idolatry that violated their fundamentalist interpretation of Islamic law. 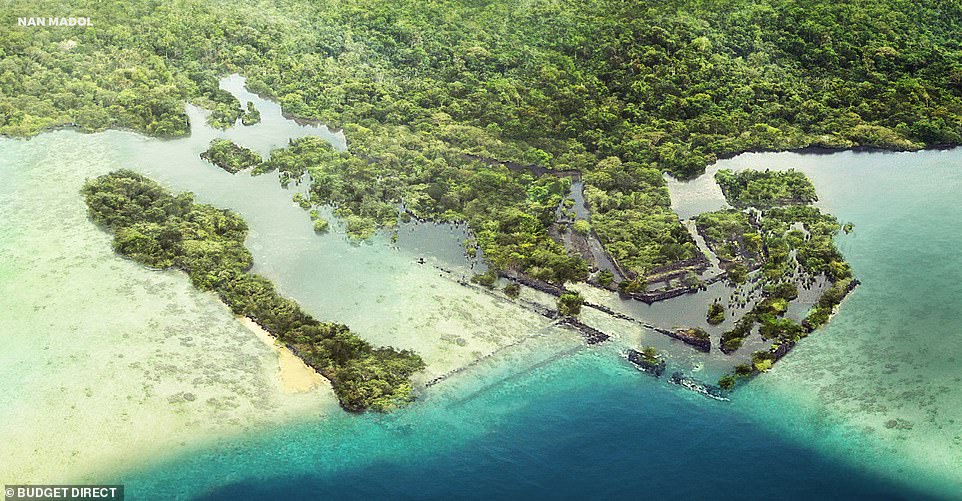 The ancient city of Nan Madol, pictured now. It is a series of more than 100 artificial islets spread over 200 acres off the south-east coast of the island of Pohnpei in Micronesia 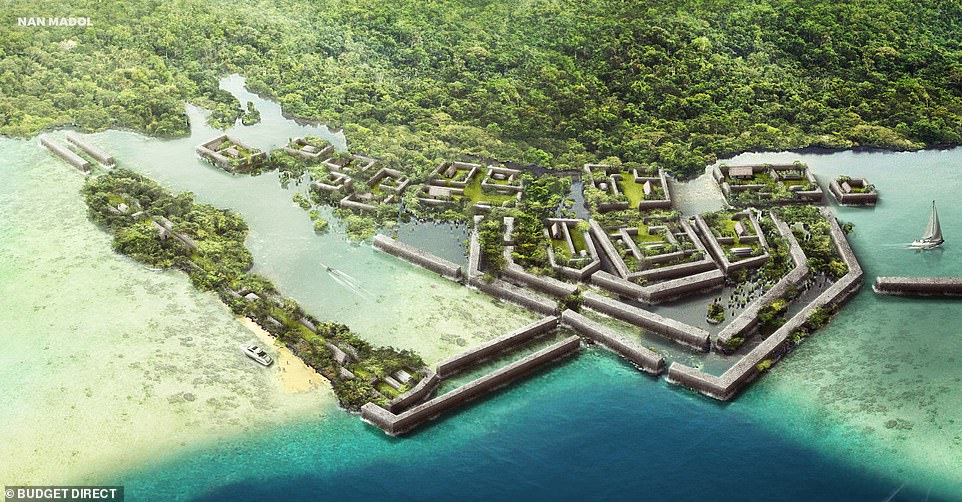 How Nan Madol could have looked if it had been preserved. The site is in danger of being lost due to siltation (water polluted by silt) and the unchecked growth of mangroves

The ancient city of Nan Madol is a series of more than 100 artificial islets spread over 200 acres in a lagoon off the south-east coast of the island of Pohnpei in Micronesia.

They were made using basalt and coral boulders, with most of the construction taking place between the 13th and 16th centuries. The islets housed temples, tombs, stone palaces and residences and were linked by canals. Unesco says the ruins ‘represent the ceremonial centre of the Saudeleur dynasty, a vibrant period in Pacific Island culture’.

However, the site is vulnerable to the elements and is on Unesco’s danger list due to the siltation of waterways (when water becomes polluted by silt) as well as the unchecked growth of mangroves. 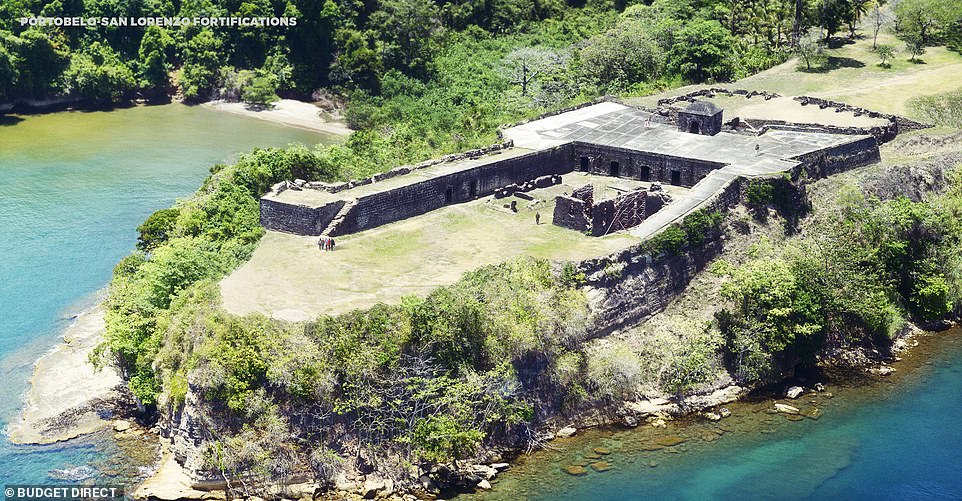 The Portobelo and San Lorenzo fortifications were built during the 17th and 18th centuries in Panama. Pictured is Fort San Lorenzo 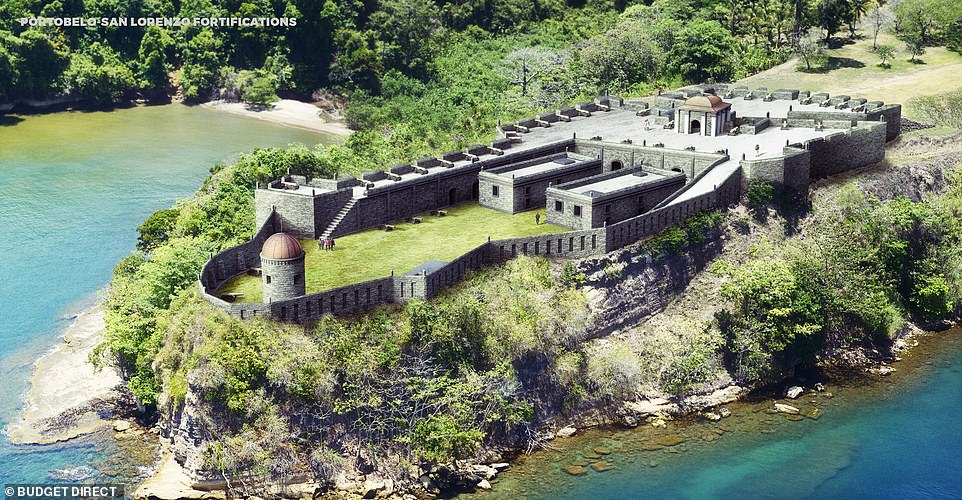 The fortifications were constructed by the Spanish Empire to protect transatlantic trade. This is how Fort San Lorenzo could have looked if it had been preserved

The Portobelo and San Lorenzo fortifications were built during the 17th and 18th centuries on the Caribbean coastline of Colón Province in Panama.

They were constructed by the Spanish Empire to protect transatlantic trade and are described by Unesco as ‘magnificent examples of 17th and 18th-century military architecture’. Pictured above is Fort San Lorenzo.

The fortifications have been added to Unesco’s list of world heritage in danger due to ‘environmental factors, a lack of maintenance and uncontrollable urban developments’. 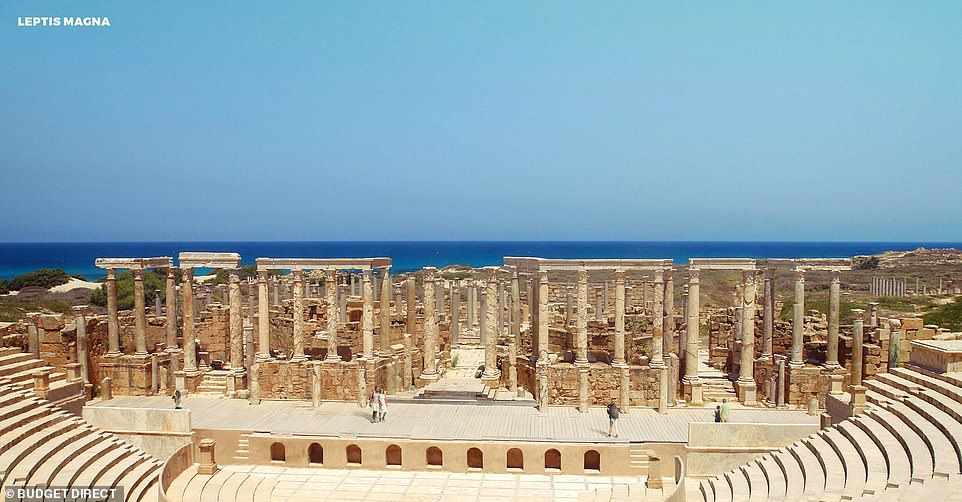 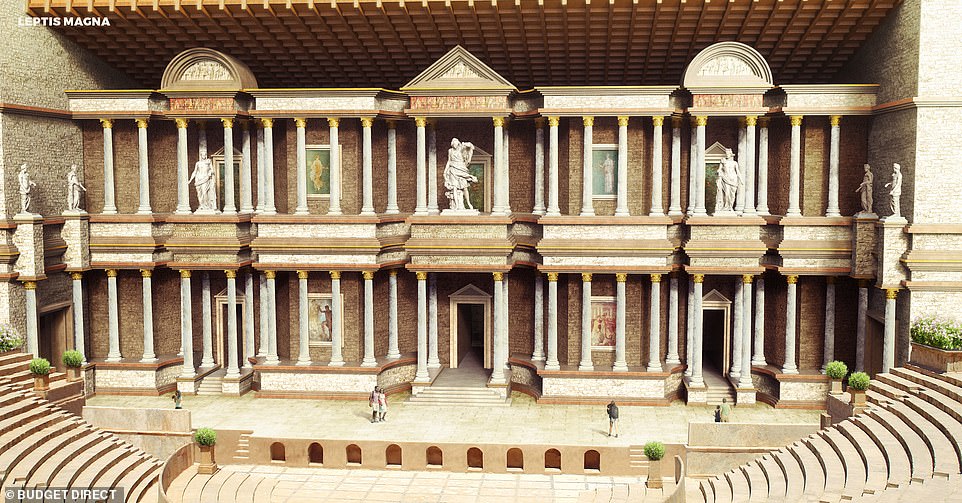 How the theatre could have looked had it been preserved. The ruins are under threat of being damaged due to instability in Libya and environmental factors

Leptis Magna was a prominent city built in the 7th century in present-day Libya and enlarged by Septimius Severus – a native of the city – after he was crowned Roman emperor in 193 CE. He turned it into what Unesco describes as ‘one of the most beautiful cities of the Roman Empire’.

One of the city’s most impressive features was its theatre, the oldest in Roman Africa, which was financed by rich aristocrats. It was dug into a low hill and boasted five flights of steps, a collonaded walk on its upper edge, gardens and a temple. And here you can see what a breathtaking building it used to be.

It was placed on Unesco’s danger list in 2016 due to environmental issues and the threat of damage caused by instability in Libya. 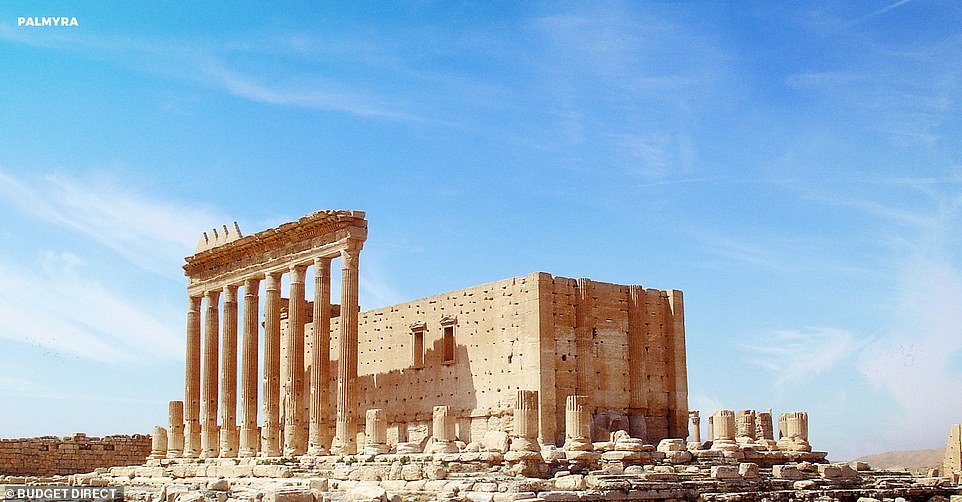 How the ruins of the Temple of Bel in Palmyra looked before they were captured by ISIS militants in 2015, who set about destroying them 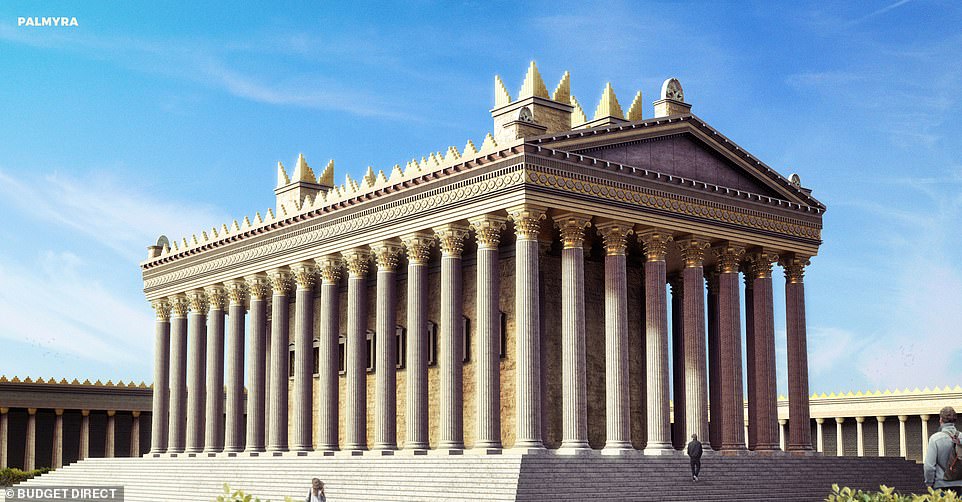 The Temple of Bel after being given a digital makeover. Emergency work is underway to try to rebuild the monument

An oasis in the Syrian desert north of Damascus, Palmyra is described by Unesco as ‘one of the most important cultural centres of the ancient world’ due to its art and architecture, which ‘married Graeco-Roman techniques with local traditions and Persian influences’.

Its Temple of Bel was built in the first century, located inside a large precinct lined with porticos, and was surrounded by a 673ft (205-metre) long exterior wall with a propylaea – a Greek-style monumental gateway. Its ruins had been considered the best preserved in Palmyra.

However, the before picture here shows what the temple looked like before it was captured by ISIS militants in 2015, who set about destroying it – leaving only a pillar and archway. Emergency work is underway to try to rebuild the monument and this reconstruction shows why it will be worth the effort.