Furious Express.co.uk readers have shared their opinion on the Spanish holiday resort of Benidorm after hotel industry insiders in the country issued an urgent plea for financial support. The hotel group, Hosbec, says hotel activity in the holiday hotspot fell by 81.5 percent last year compared to 2019, with overnight stays plunging to just two million rather than the 11 million in 2020.

A large portion of the loss in tourism is likely down to British travel bans and restrictions.

Typically, Britons make up around 42.7 percent of Benidorm’s tourist traffic.

However, irate Express.co.uk readers have said this will not be the case moving forward after “EU games” and “unwelcoming” locals telling Britons to “go home”.

One reader wrote: “The way Spain and the EU have treated the UK-won’t be going on holiday in Eu anymore, they aren’t very welcoming and dislike the Brits- the only thing they like about us is our MONEY!! 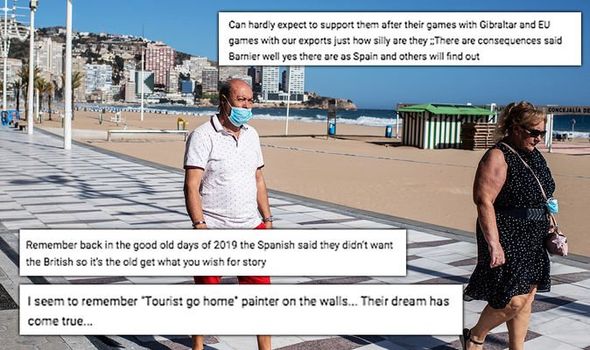 “Be spending mine elsewhere, plenty of other countries to go too who are far more welcoming-Egypt, Turkey, US- the world is a big place to go and discover and explore.” [SIC]

Another said: “Remember back in the good old days of 2019 the Spanish said they didn’t want the British so it’s the old get what you wish for story.”

A second commenter added: “I seem to remember ‘Tourist go home’ painted on the walls… Their dream has come true…”

Another pointed to disagreements between the UK and EU in recent years.

They wrote: “Can hardly expect to support them after their games with Gibraltar and EU games with our exports; just how silly are they?

“There are consequences, said Barnier, well yes there are as Spain and others will find out.”

For some, the charm of holidaying in Spain has “worn off”.

“Personally, I went to Spain for the first time in 1971 and loved it,” they wrote. 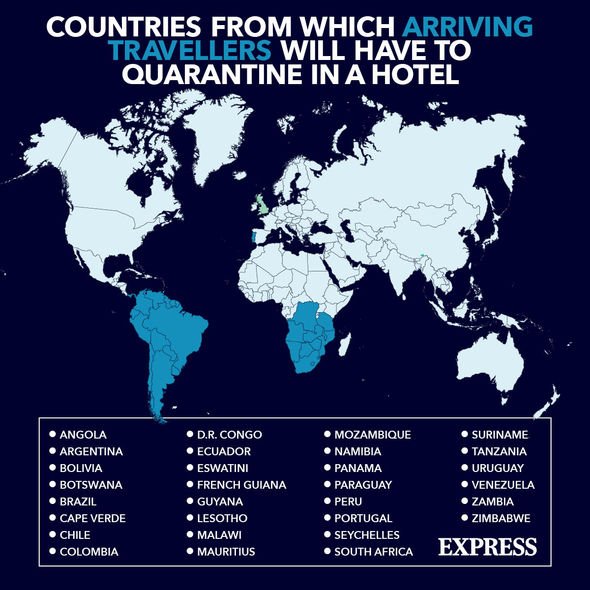 “But to be quite honest, after several holidays around Spain and on Majorca, by the end of the 80s the attraction began to wear off, as many of the Spanish became arrogant and you felt like you were always being ripped off.”

Hammering home the sentiment, one reader said: “I don’t think I am alone in saying ‘we won’t be back anytime soon.’”

A second added: “As much as we used to enjoy Spain, except the Costas which are now just a version of Blackpool with extra sunshine instead of quaint fishing villages, it will be a cold day in Hell before we ever book a holiday there now.”

Though Spain has seen a “catastrophic” drop in tourism, one reader pointed out it is a battle being faced by holiday resorts around the world.

“NO HOLIDAY RESORT is currently happy nor making any money. That is a fact of life, NOTHING CAN BE DONE ABOUT IT!,” they wrote.

“Holidays are known to be spreaders of disease the case for that is proven.

“Look at the case figures for September and again December/January.”

However, for those living and working in the bustling holiday resort of Benidorm, the loss of tourism has been described as “desperate”.

“Although it has fought hard to resist and survive this uncertain year, the tourist destination of Benidorm has been one of the hardest hit in the Valencian community,” stated Hosbec in a new report on the impact of coronavirus.

The number of international travellers visiting the region fell by 85 percent and overnight stays by 86.2 percent and of the hotels which did manage to open, occupancy was only 33.4 percent, compared to 84.2 percent.

The dire situation has been described as a “tourist catastrophe” with figures for the whole of Valencia showing 70 percent of hotel activity lost, more than 50 percent of employment and 42 percent of the hotel offer not been able to operate.

“The losses of the sector in the Valencian community amount to more than 700 million euros just in hotel accommodation,” says Hosbec which is calling for a rescue package of €160 million (approximately £142,014,199).