Vast areas of Puebla del Río and Coria del Río in Spain, both with extensive marsh and rivers, are having to be disinfected due to fears that more people could be affected. All the parks and gardens of the two towns are being treated, followed by the wetland areas and the countryside in general.

Seventeen of the 19 meningitis victims are in hospital and seven are in intensive care.

Doctors have tested all of them for Nile fever and so far, a dozen are confirmed to have the virus. The results of the other tests are awaited.

Yesterday, the mayors of the two towns joined in an emergency meeeting and launched safety protocols and warnings to the public.

Nile fever can produce severe infections with flu-like symptoms in addition to muscle weakness, confusion and fits but in other cases, people can show no signs of ill health. Others might get a skin rash or nausea. 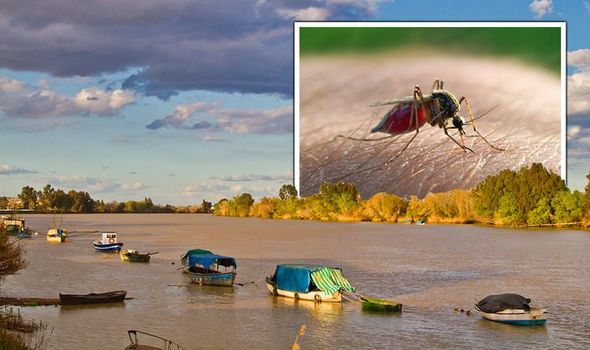 There is no vaccine and it is not contagious. You can only get it by being bitten by a mosquito.

All 19 patients are fighting meningitis, also transmitted through mosquito bites.

The massive disinfection plan got underway on Friday to prevent the spread of Nile fever.

Workers are using a substance which blocks the nerve signals of the larvae, stops them feeding, paralyses them and leads to their death within four days.

Another spray is being used for stagnant water and prevents adult female mosquito from laying eggs.

Squares, roads, schools, gardens, parks, tree areas and even roundabouts are being fumigated and this will continue every two to three days until the alert is over.

Each area takes about two hours to disinfect and residents are being urged to stay indoors until it is finished and then keep away from the fumigated zones for 24 hours.

The mayor of Coria del Río, Modesto González said the two towns were acting in a co-ordinated manner and had put the shock plan into action with speed. He stressed it was important for residents to follow all instructions.

To avoid being bitten, they are being urged to stay indoors between dusk and dawn.

Health chiefs are also advising the use of mosquito nets on windows and doors and leaving lights off so as not to attract the insects.

“Correct body hygiene must be followed daily,” said the health department. “Avoid intense perfumes and wear clothing that covers the skin as much as possible and shake it before use if it has been laid outside.

“Make proper use of repellants, strictly following the recommendations on the mode and frequency of use described by the manufacturer.

“If you use sun cream, apply it first, let it soak in for twenty minutes, and then apply the mosquito repellent.”

Nile fever has a ten percent chance of death.

Both towns are considered tourist areas and before the coronavirus pandemic, British holidaymakers have visited to enjoy their history and natural heritage.

The UK’s National Health Service says: “WNV is found in many parts of the world but very few people coming back to the UK have the virus. No one has got the virus while in the UK.”