The brave new world AC (that’s ‘After Corona’): Hotel life is all visors and smartphone orders – but there is a warm, smiling welcome back

Dinner time at Fowey Hall Hotel, which sits above the pretty harbour town of Fowey on the south Cornwall coast, and I’m looking forward to a sumptuous feast in its critically acclaimed restaurant.

Some seafood caught in the waters that lap against the shore below, perhaps. Maybe some samphire plucked from a nearby beach. And, of course, a glass or two of fine wine.

But what follows is a dining experience the like of which I have never before experienced — and it’s going to take some getting used to. 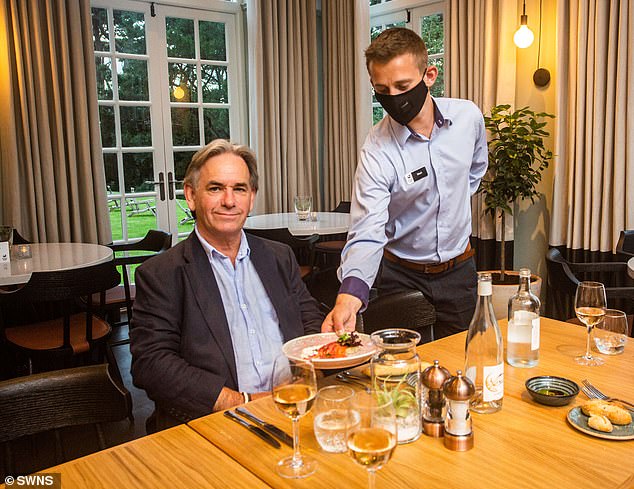 Caring: The Daily Mail’s Mark Palmer settles in for dinner served by staff in masks or visors

The waitress who greets me at the entrance to the room is wearing a face mask. She proceeds to escort me to a table with absolutely nothing on it. Glasses, cutlery, salt and pepper are brought only once I have sat down.

Then comes the clever bit. Rather than menus, the hotel has introduced a QR [Quick Response] matrix barcode system. No, me neither. But my waitress explains: ‘Point your mobile phone camera at the barcode and it should prompt you to tap a link to the hotel website where you’ll see the menus.’

And it does. As I peruse the fare on offer, my eyes wander to the next-door table. It is uncomfortably close to my own. But then I see that it has a note on it saying: ‘Don’t choose me, it may look like I’m free for you to take a seat, but we’re following government advice about social distancing.’

It’s time to order: ‘I’ll have the salmon and beetroot followed by the rib-eye medium-rare, please.’

Throughout the meal, my waitress variously asks before delivering any food or drinks: ‘Can I now approach your table with . . .?’ — a glass of wine (‘Rather!’), your first course (‘Yes, please!’), another glass of wine (‘You bet!’).

Welcome to hotel life in the pandemic era. Mind you, demand has never been greater, with many establishments reporting a 400 per cent rise in bookings until the end of September. A bonanza, of sorts — but what exactly will those guests experience when they check in? Will it be any fun?

Fowey Hall Hotel, which is thought to have been the inspiration for Toad Hall in Kenneth Grahame’s The Wind In The Willows, closed for a £3.5 million refurbishment six weeks before the national March 23 lockdown, which means it’s been out of action for nearly five months.

‘It’s like a whole new beginning,’ says Dulce Marques, the hotel’s Portuguese general manager. ‘The challenge will be to make it feel as unclinical as possible.’

Quite a test given the circumstances.

Prior to their arrival, guests receive two emails: one explaining how the hotel will implement official health guidelines; the other pointing out that once the spa and pool are allowed to open, guests will be asked to fill out a questionnaire asking if they have had any coronavirus symptoms. 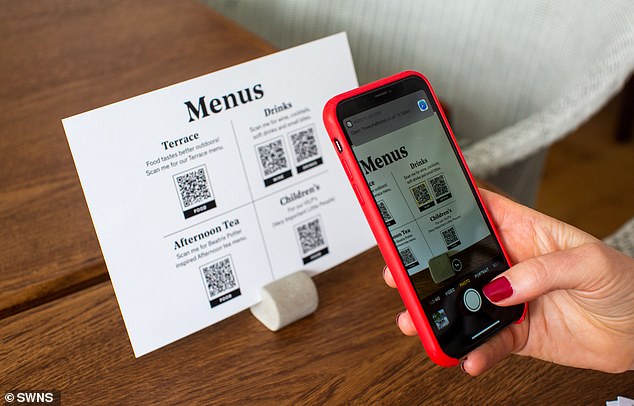 When I turn up I am greeted by a large bottle of hand sanitiser at the front door, with a sign saying ‘Keep your distance’ and ‘Wash your hands frequently’.

I give my name at reception and am assigned the Sir Charles Hanson room on the first floor, which is named after the former MP for Bodmin and Lord Mayor of London, who built Fowey Hall in 1899.

‘The door will be open and the sanitised key will be in an envelope on the chest of drawers,’ says the receptionist.

What’s immediately striking is how many additional decisions you have to make in this brave new hospitality world. It starts with a member of staff asking whether he can carry my bag or if I would ‘feel more confident’ carrying it myself?

‘We wash and sanitise our hands after helping each guest with their luggage,’ he says in a suitably reassuring tone.

I opt to take it myself — not because I am corona-paranoid but because I could do with the exercise. 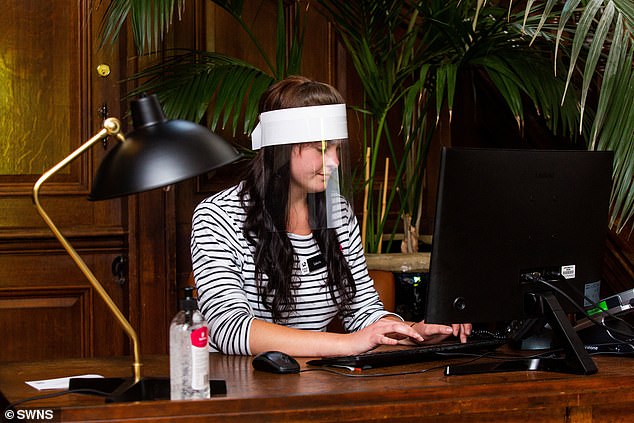 A receptionist at Fowey Hall Hotel in Cornwall, which is re-opening after being closed for five months

Once in my room I immediately spot an upside to the new health and safety regulations, at least for those of us who hate hotel rooms brimming with leaflets, tourist information, long-winded directories and pious notices about how not changing the towels will ‘save the planet’. There’s a total absence of clutter.

Indeed, the only literature on display is a small card saying: ‘Rest assured this room has been thoroughly deep-cleaned with antibacterial sanitiser, approved for use against Covid-19, for your safety and peace of mind.’

No teddy bear sitting on the bed waiting to be bought for an absurd amount of money, no basket of fruit and (sadly, it must be said) no mini-bar waiting to be raided in the wee small hours.

One of the great joys of staying in a hotel used to be the chance it afforded for spontaneity. But not at the moment. Instead, I’m asked what time I would like dinner and when I am hoping to have breakfast because, clearly, it would be impossible to abide by the one-metre rule if everyone ate at the same time. I go for 8pm and 8am respectively. 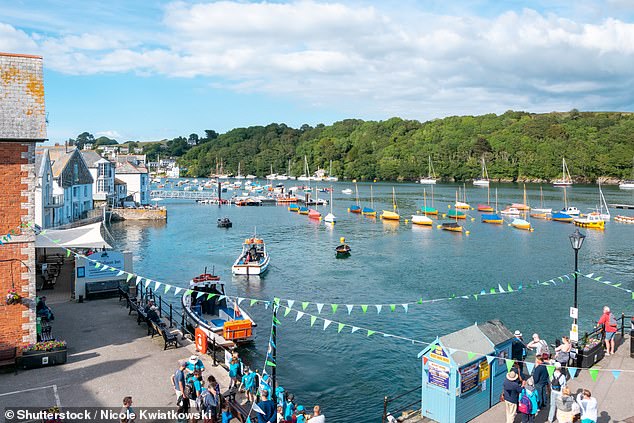 The Fowey Hall Hotel sits above the pretty harbour town of Fowey, pictured, on the south Cornwall coast

There’s a silver lining here, too. Because of staggered eating times, the restaurant is now ‘all-day dining’ and open for breakfast until 11am rather than 10am. Lovers of lie-ins, take note.

You can even elect to be served by a waiter or waitress (who have had their temperatures taken before starting their shifts) wearing either a visor or a mask.

You can also ask for your room to be cleaned, or be supplied with the materials to do it yourself.

The second option doesn’t make much sense given that half the reason for paying to stay in a hotel is the privilege of avoiding domestic duties of any kind.

In any case, if you do opt to have your room cleaned, the cleaner will be wearing full personal protective equipment and only goes into the room when you’re out.

After a night of restful slumber, it’s off to breakfast in a room adjacent to where I’d had dinner. A different card on the table says, merrily: ‘Rise and shine. Scan me for breakfast.’

Which I do, while looking longingly at the huge empty table which in happier times would be the breakfast buffet, the demise of which is surely one of the saddest deprivations caused by Covid-19.

At check-out, it’s strictly cards only — and I’m touched to be given a paper bag packed with a bottle of water, a sandwich, an apple and cake for the journey home.

And, perhaps, that’s the point. Staying in a hotel certainly will come with its inconveniencies in the next few weeks or months, so those in the hospitality sector will be trying extra hard to keep us happy and the tills trilling.

As the veteran hotelier Gordon Campbell Gray puts it: ‘We need to tempt back our wary customers. ‘Wow!’ they must say, ‘that lobster soufflé was worth risking my life for.’