A mind-bending image of an orangutan, a crocodile snapping up a fish and an enchanting island: The incredible winning photos in a nature photography contest

A mind-bending image of an orangutan is the winner of a prestigious photo competition.

It is one of 8,000 entries to the Nature TTL Photographer of the Year 2021 contest and secured the winning snapper a £1,500 cash prize.

The triumphant photo is by Canadian photographer Thomas Vijayan, who took it in Borneo. The photo appears to be looking towards the sky but on closer inspection, you can see that the image actually shows a mirror-like reflection in water below a tree.

Will Nicholls, founder of online nature photography resource Nature TTL, says: ‘Thomas’ image is really unique, and immediately stood out to the judging panel. It’s one of those photos where you can’t skim past it. The unique perspective and composition mean you are immediately trying to figure out what exactly you are looking at.’ 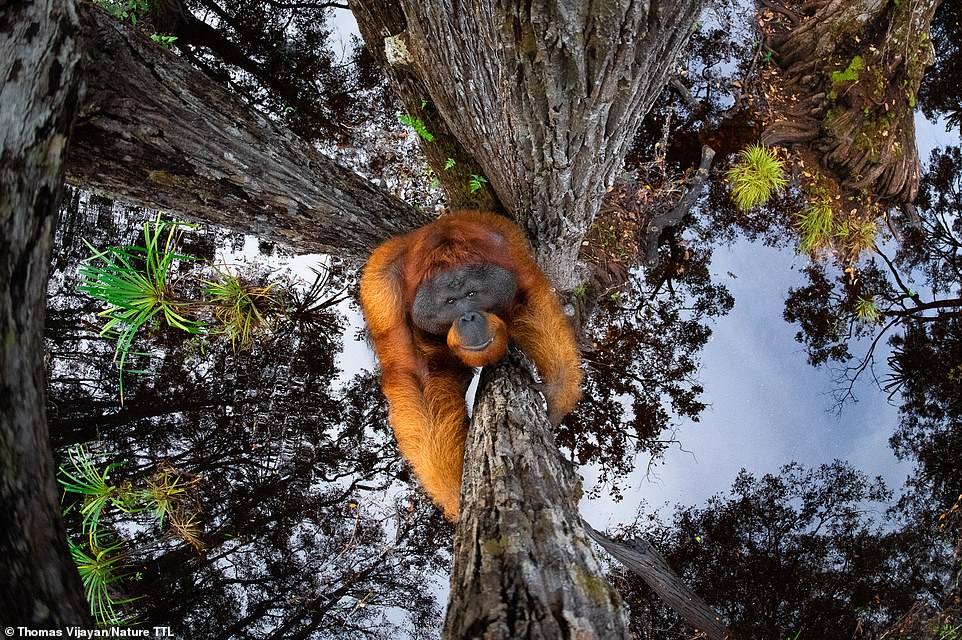 The overall winning image in the Nature TTL Photographer of the Year 2021 contest, taken by Thomas Vijayan. He says: ‘After spending few days in Borneo, I got this frame stuck in my mind. To get this shot, I selected a tree that was in the water so that I could get a good reflection of the sky and its leaves. The water formed a mirror, making the image look upside-down. Then I climbed up on the tree and waited for hours. This is a regular path that orangutans use, so patience would surely pay off. This image means a lot to me because presently the orangutan population is reducing at an alarming rate.’ The image is also the winner of the animal behaviour category 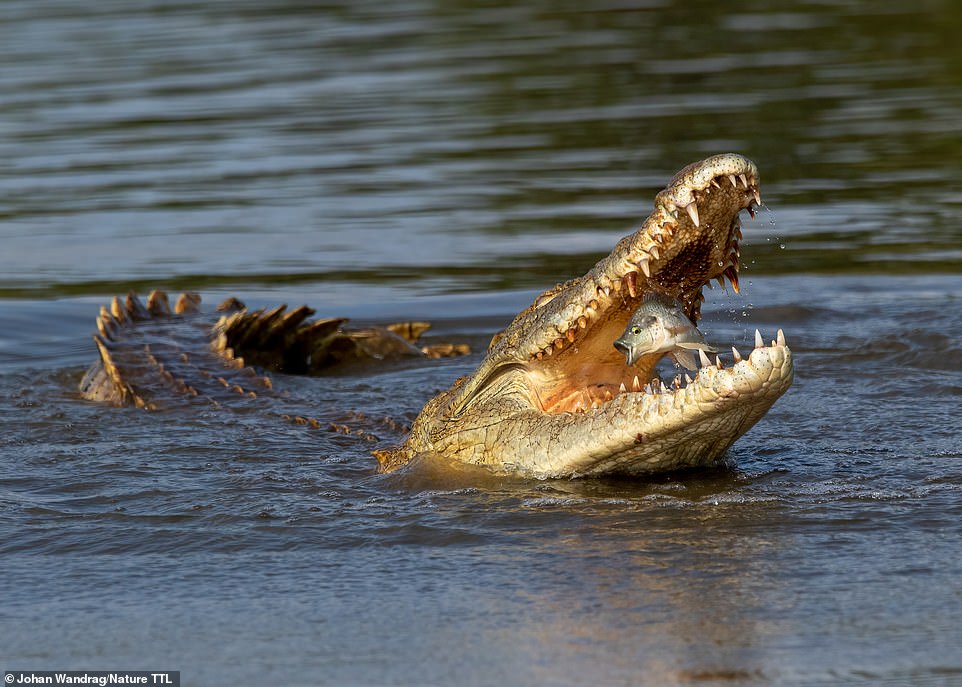 An incredible image taken by Johan Wandrag in South Africa of the moment a fish is snapped up by a crocodile. It is the runner-up in the animal behaviour category. Johan says: ‘The look of surprise really made this shot stand out to me’ 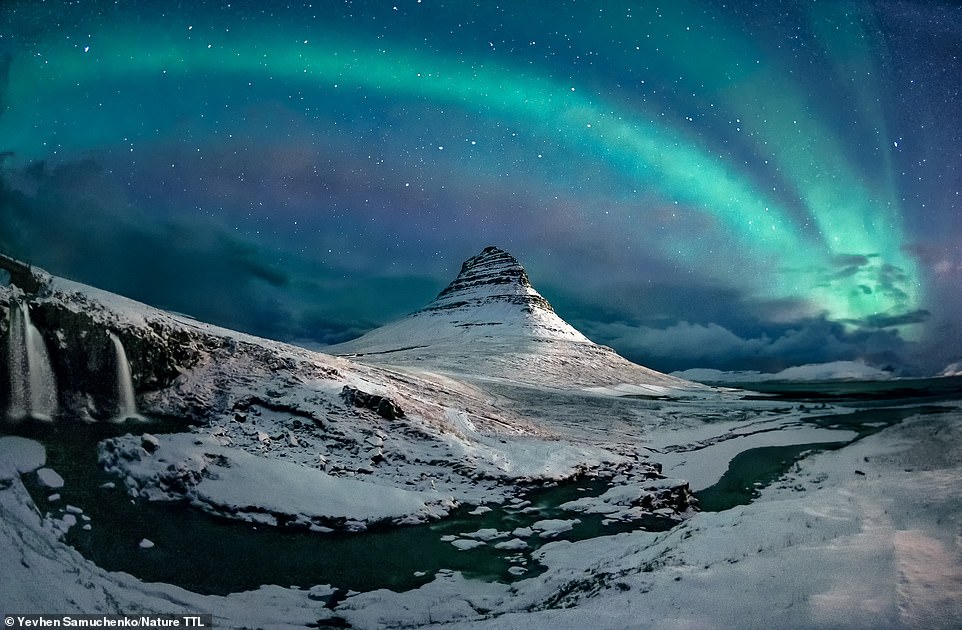 Yevhen Samuchenko is highly commended in the night sky category thanks to this beautiful image of the Northern Lights, in an unusual arc shape, above the 1,519ft- (463m) high Kirkjufell mountain in Iceland 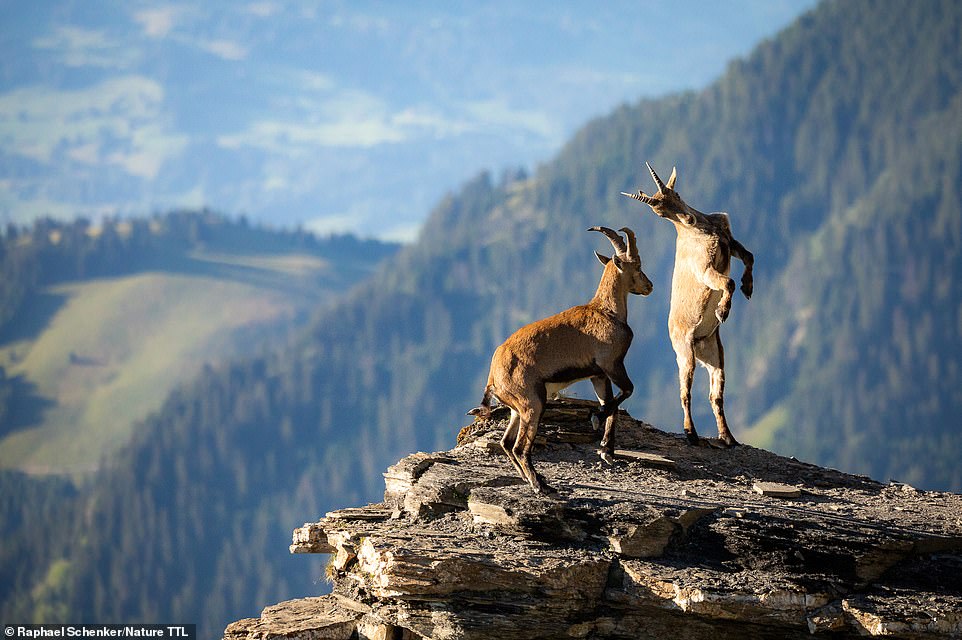 Runner-up in the under-16 competition is Raphael Schenker with this spellbinding image of a pair of fighting goats. He explains: ‘I took this picture while on a long hike in Graubunden, Switzerland. I saw how the father of these two mountain goats was teaching them how to fight’ 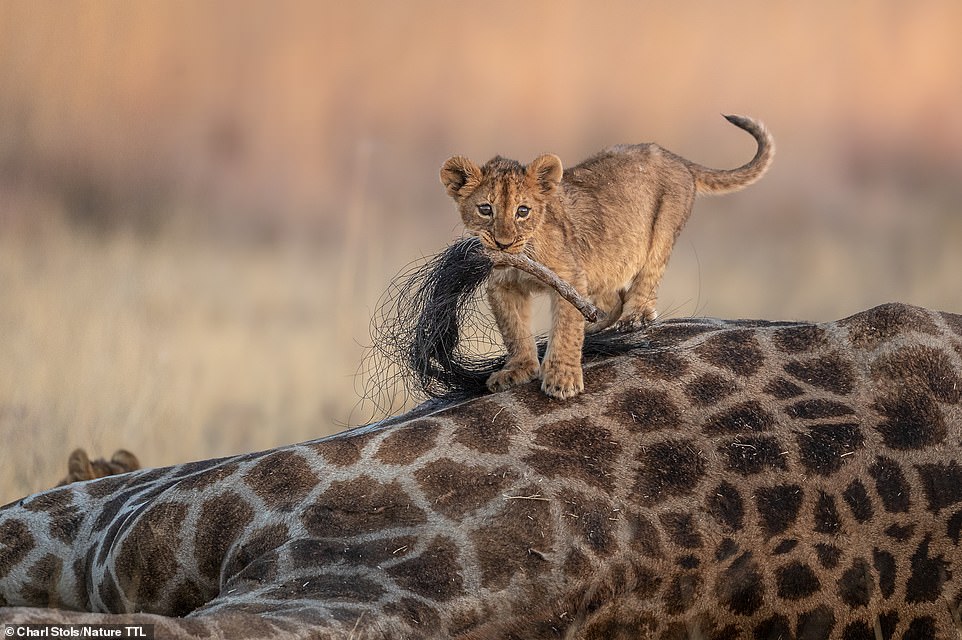 This amazing snap was taken by Charl Stols in Botswana and is highly commended in the wild portraits category. He says: ‘As bizarre as it might seem to us, jumping up and down on a giraffe carcass and playing with the tail of a dead animal is as normal as it can be for a curious lion cub’ 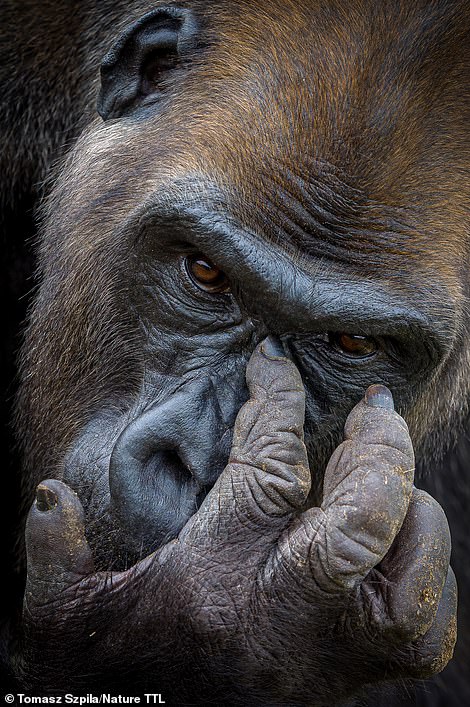 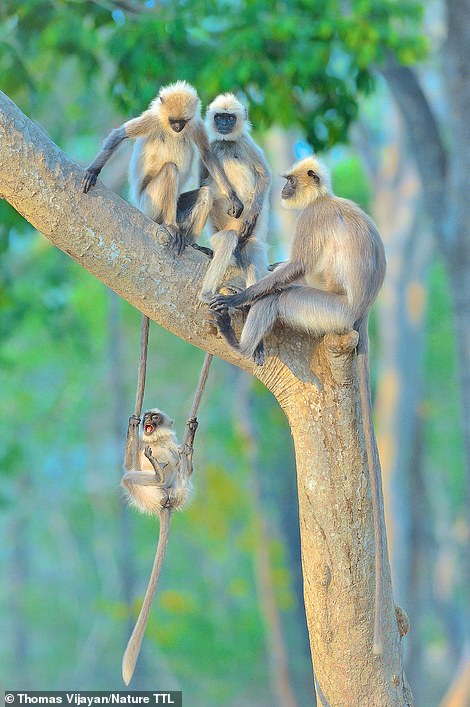 LEFT: This beautiful portrait of a western lowland gorilla called Kangu was snapped by Tomasz Szpila and is highly commended in the wild portraits category. Kangu lives in ‘semi-free’ conditions in the Lesio Louna reserve in the Republic of Congo. He had been born at Howletts Wild Animal Park in Canterbury and also spent time at Port Lympne Reserve in Hythe, Kent, before being taken back to his natural habitat. Tomasz says: ‘Thanks to the Aspinall Foundation, he is now being adapted to living in the wild. Hopefully, he will be able to go back to the forest soon.’ RIGHT: Another amazing image by Thomas Vijayan – this time taken in Bandipur National Park in India. He says: ‘One afternoon a group of black-footed grey langurs were sitting on a tree. A playful infant was enjoying the family time and was playing with his parents by swinging on their tails and falling down, and then immediately climbing back and starting all over again. His mother was taking little notice of the activity and other adolescents were tolerating the attention-seeking acrobatics.’ The snap is highly commended in the animal behaviour category 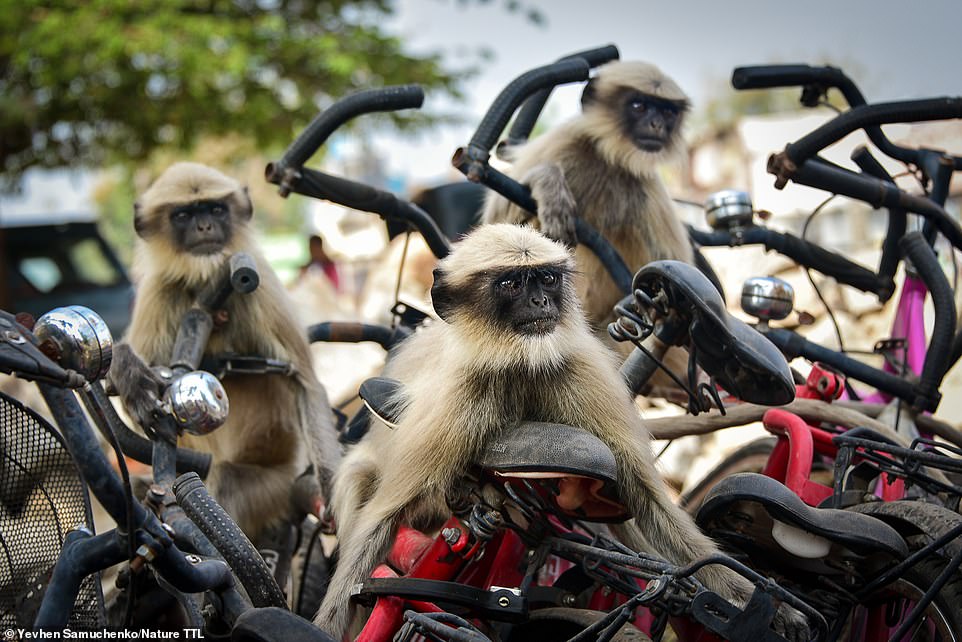 These cheeky langurs were snapped by Yevhen Samuchenko in the small Indian town of Hampi. Yevhen says: ‘My friends and I were walking in the centre of Hampi and there was a bicycle parking area nearby. Suddenly a group of langurs jumped on these bicycles and began to frolic around. We were afraid to frighten them away, so I started taking pictures from afar. But then we came very close to them and the langurs continued to play with bicycles for a comical shot.’ The image is highly commended in the urban wildlife category 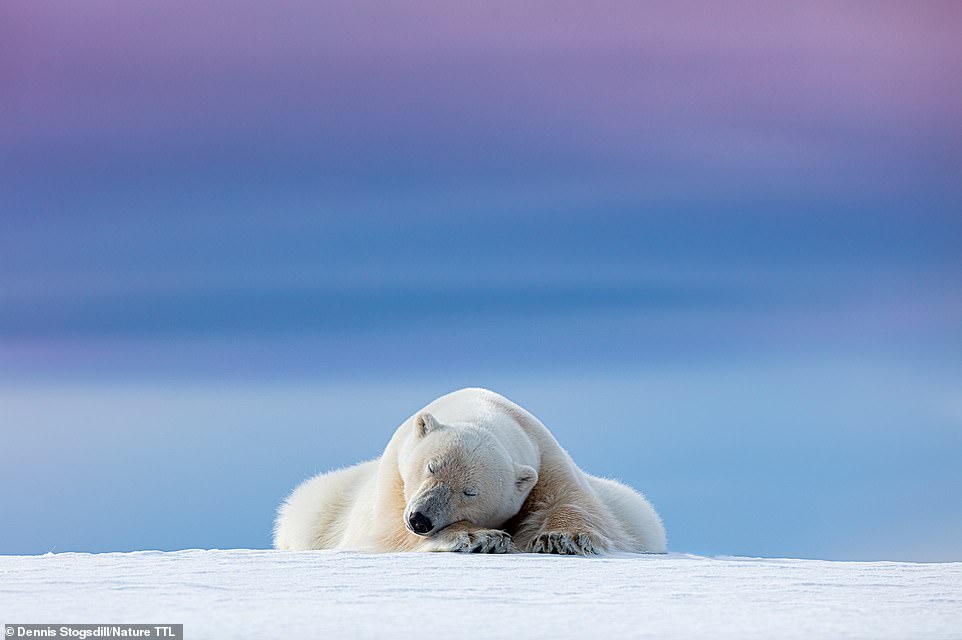 The winner of the wild portraits category is Dennis Stogsdill with this breathtaking image. He explains: ‘We were watching this rather photogenic polar bear for a while in Svalbard, Norway, when he climbed a ridge and decided to just rest. All the while the soft afternoon skies created the perfect backdrop for a sleepy bear’ 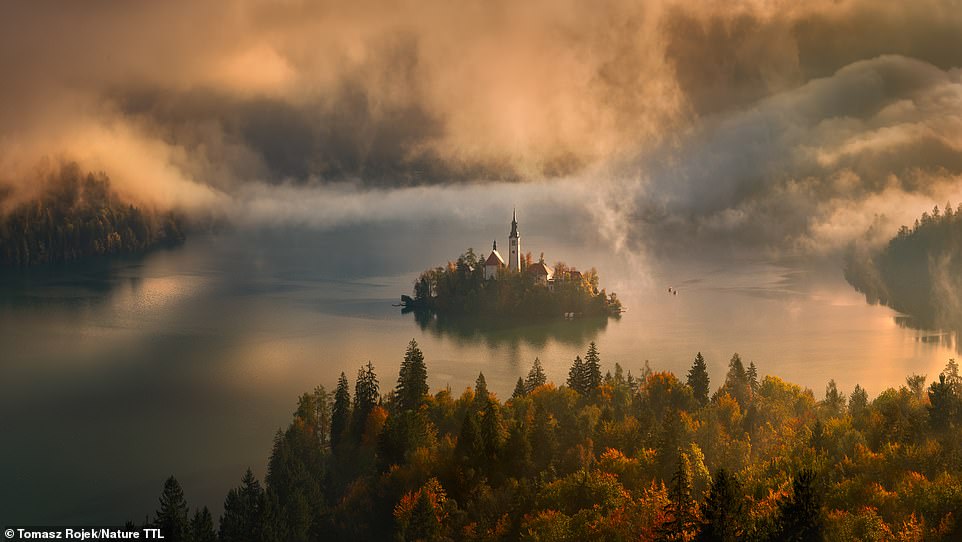 Tomasz Rojek captured this magical scene on an October morning at Lake Bled, Slovenia. The image is highly commended in the landscapes category. He says: ‘I have visited this place many times and I have seen a lot of pictures of it but the conditions on this morning were great. Clouds and mist created a spectacular view’ 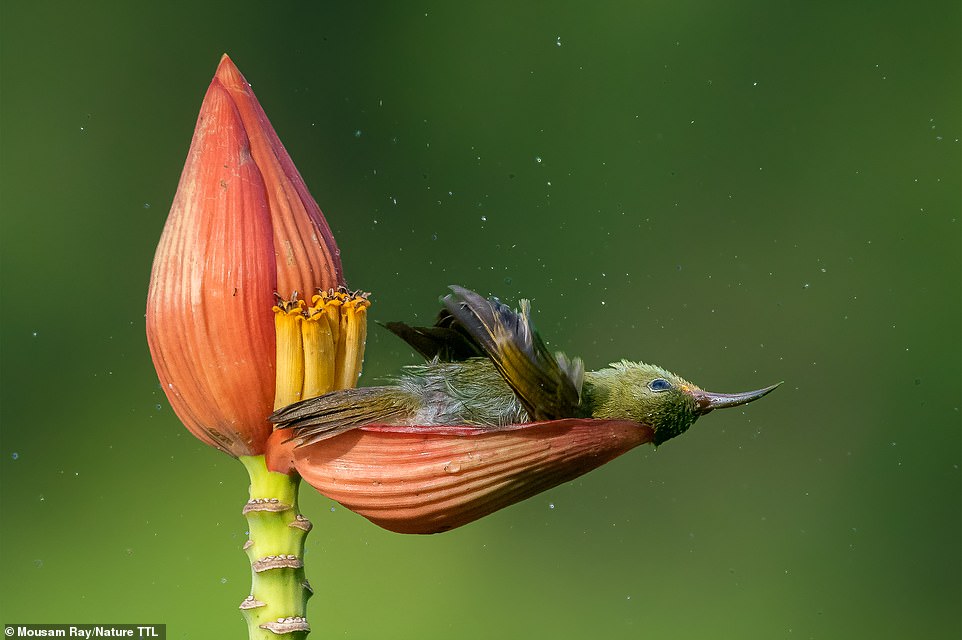 This incredible image shows a bird refreshing itself in water stored in the petal of an ornamental banana flower in India. It was snapped by Mousam Ray, who is highly commended in the animal behaviour category. He says: ‘It’s as if nature created a floral bathtub’ 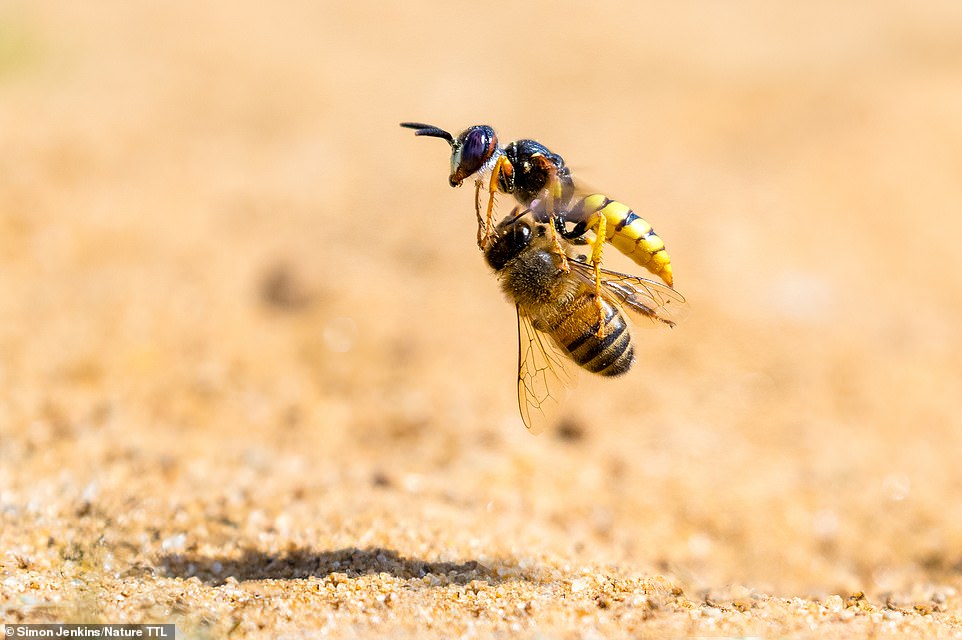 Simon Jenkins is the photographer behind this fascinating snap of a beewolf carrying away its ‘unfortunate’ prey – a honey bee. He took the image in Minsmere, Suffolk, and it is highly commended in the small world category 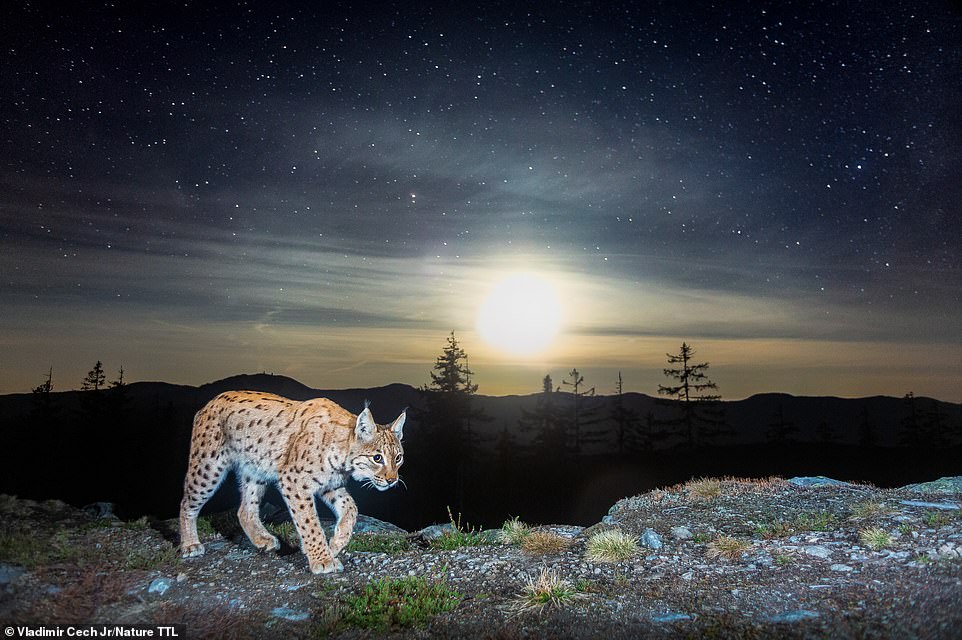 Vladimir Cech Jr is highly commended in the camera traps category for this stunning image of a wild Eurasian lynx. He took the snap in Sumava National Park in the Czech Republic using a homemade camera trap 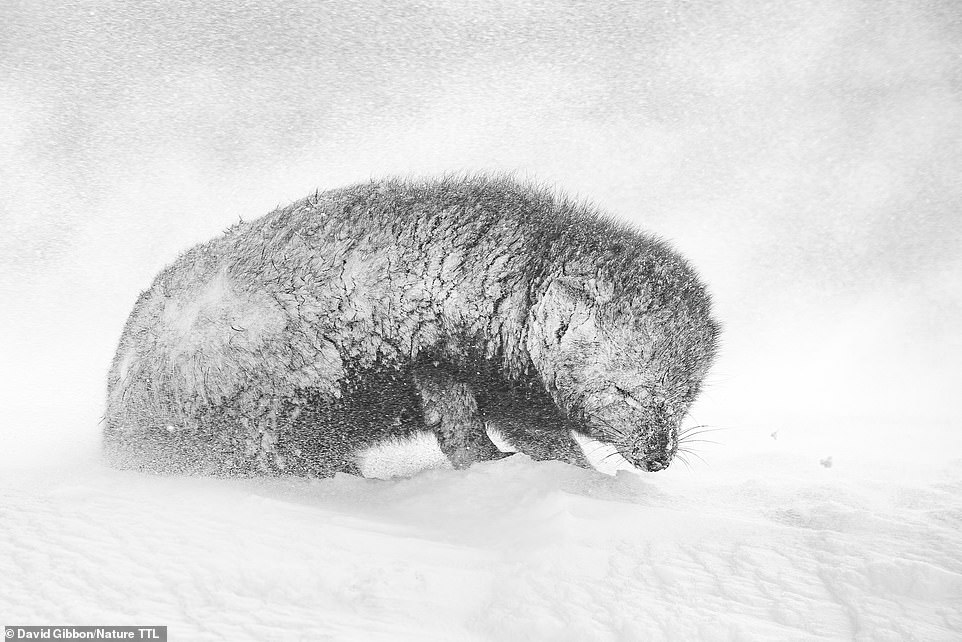 A mesmerising shot of a blue morph Arctic fox in Hornstrandir Nature Reserve in the far north-west of Iceland, taken by David Gibbon. The snap is highly commended in the animal behaviour category. David says: ‘Gale force winds, sub-zero temperatures and heavy snow made hunting very tough for this individual, so the hungry fox lay down in the hope the storm would soon pass so it could continue its search for food’ 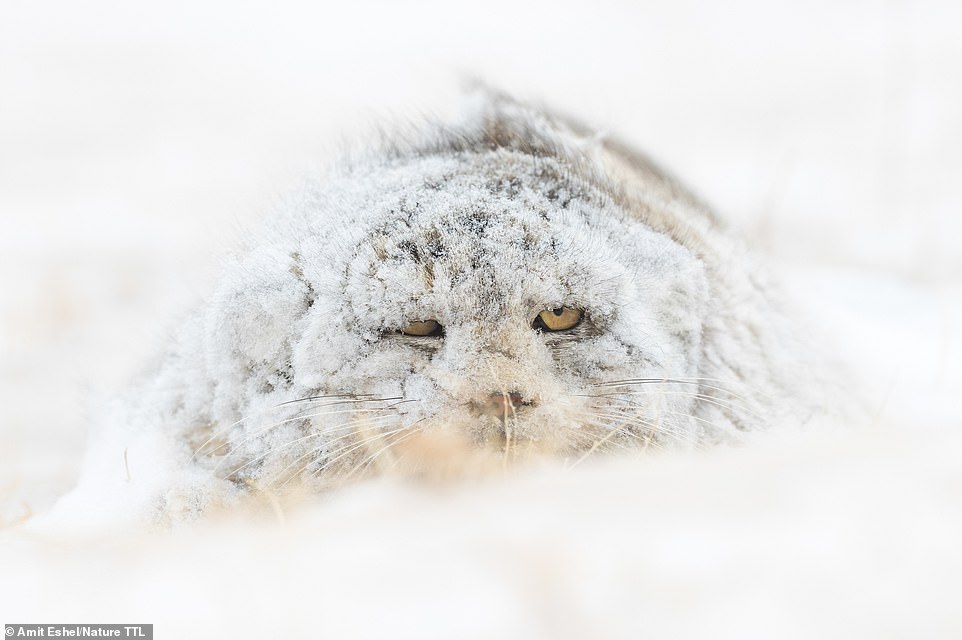 Highly commended in the wild portraits category is Amit Eshel with this beautiful shot of an elusive Pallas’s cat in Mongolia. He explains: ‘After six full days of searching we were lucky to find this cat lurking for prey in the snowy steppe. The cat was covered in fresh snow, which made him look like an unfamiliar creature – a snow monster!’ 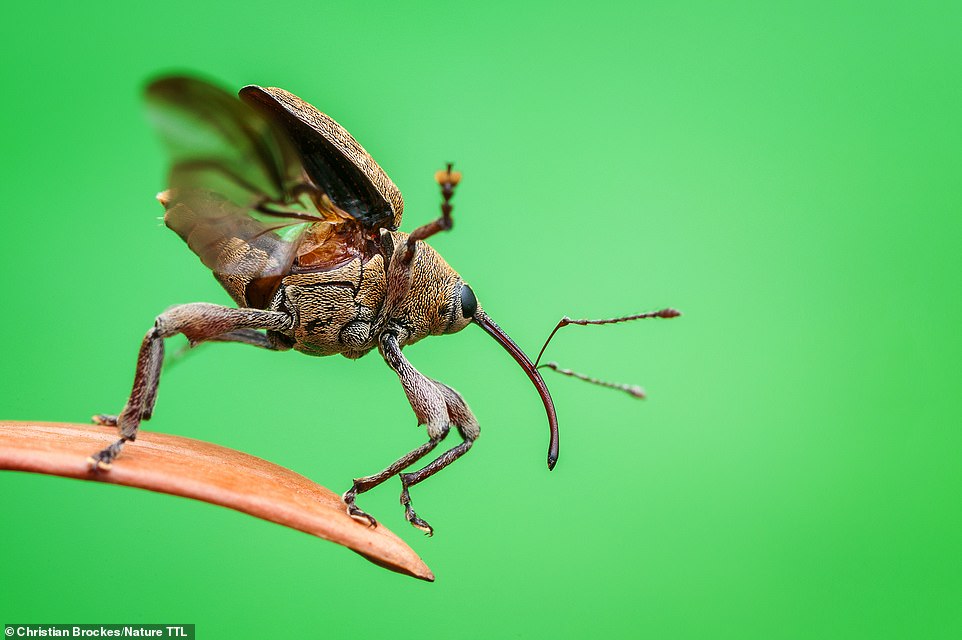 Earning highly commended status in the small world category is Christian Brockes for this jaw-dropping image of an acorn weevil spreading its wings, ready to take off in Essen, Germany 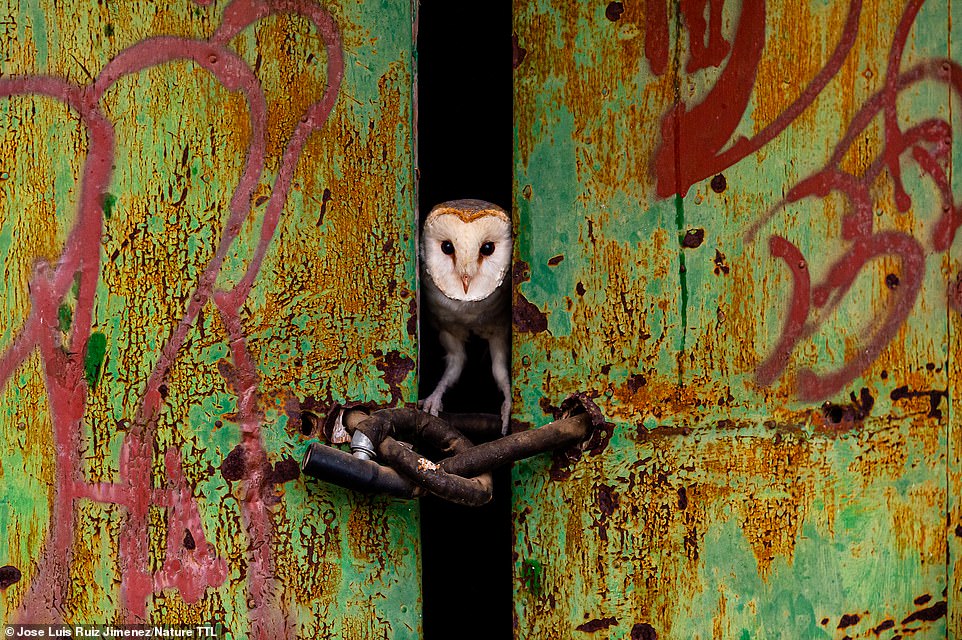 An incredible shot of a barn owl peeking out from the door of an old abandoned house in El Puerto de Santa María, Spain. It was taken by Jose Luis Ruiz Jimenez and is highly commended in the urban wildlife category 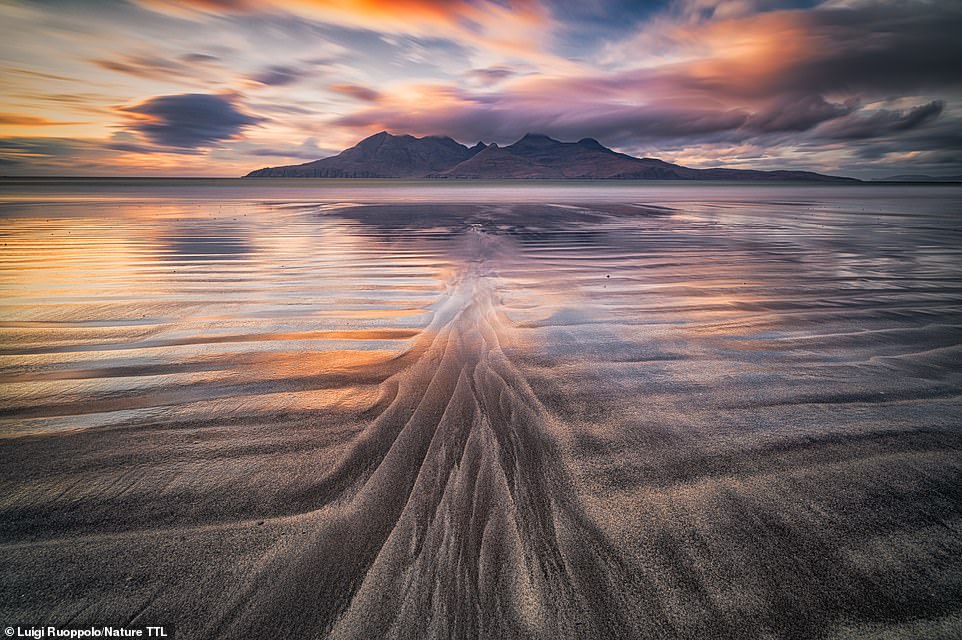 This spellbinding shot was taken at sunset by Luigi Ruoppolo on the Scottish island of Eigg. It shows the ‘beautiful colours and stunning clouds moving over the mountains of Rum island’. He explains: ‘I was quite far from the shoreline, following the patterns left in the sand by the tide and shooting at 90 seconds exposure to get as many reflections as possible.’ The shot is highly commended in the landscapes category 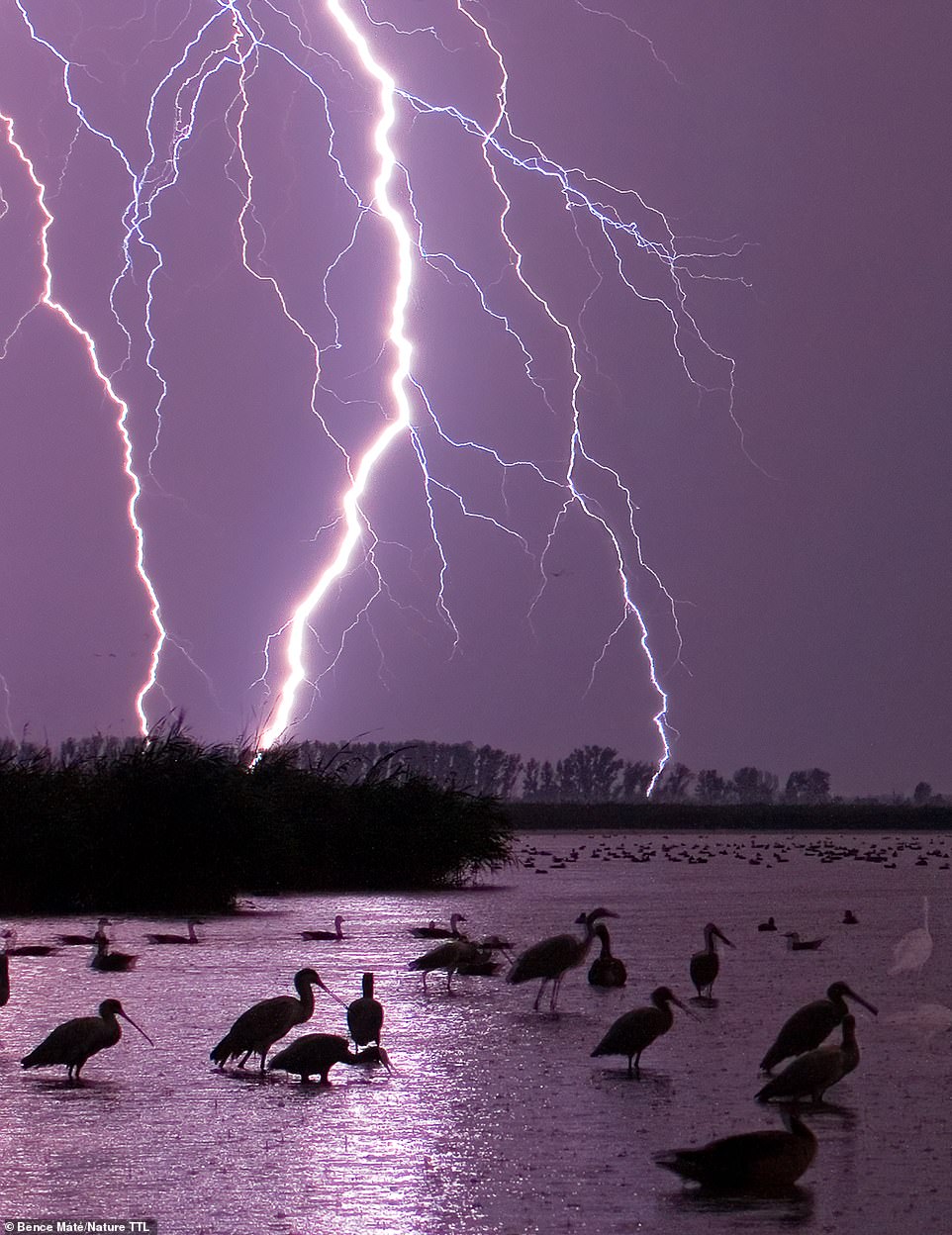 This eye-popping shot of huge flashes of lightning above birds on a lake in Kiskunsag National Park, Hungary, was taken by Bence Mate. He is highly commended in the night sky category and explains: ‘The image is purple because of the short wavelength of lightning’ 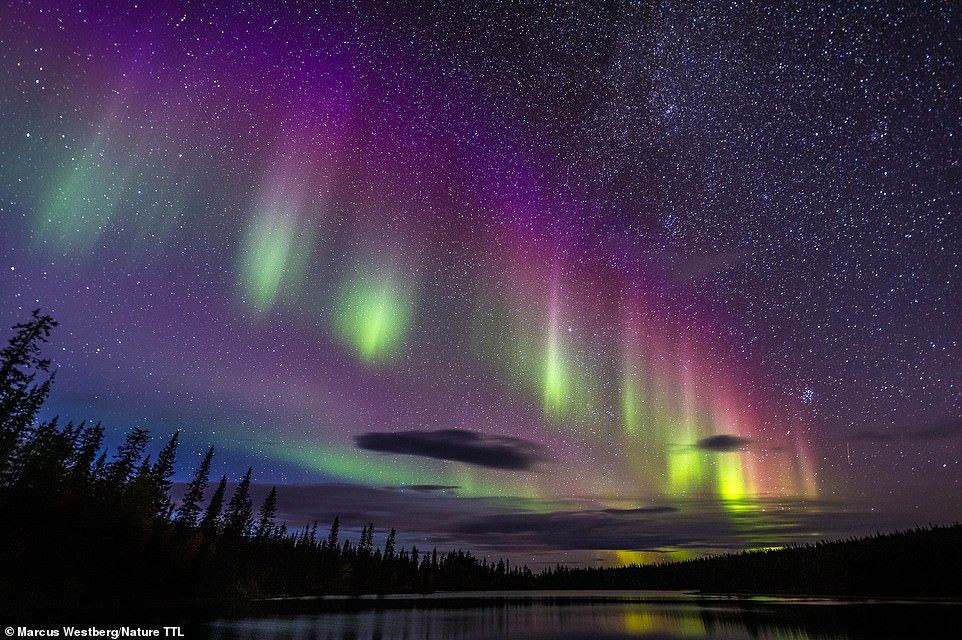 A stunning image taken by Marcus Westberg that captures a ‘rare type of aurora’ over an alpine lake in northern Sweden. The image is highly commended in the night sky category