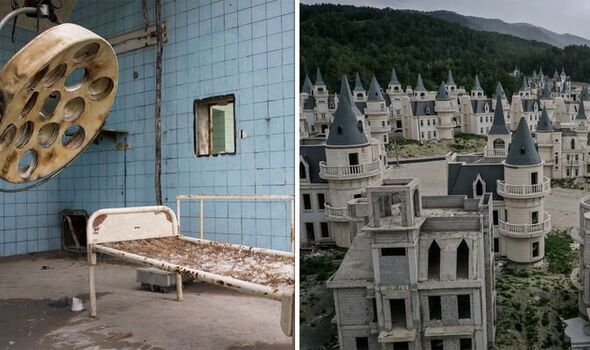 Oliver Smith is the author of the Atlas of Abandoned Places, A Journey of the World’s Forgotten Wonders. He spoke to Express.co.uk about the “poetic” history of abandoned places.

From the deserted holiday resort of Varosha to the defunct WW2 Maunsell Forts in the North Sea, abandoned places capture a moment in time.

Oliver told Express.co.uk: “They offer a different kind of history to the one we might encounter more typically in museums and exhibitions.

“The kind of past that these places serve is often very raw and there’s a sense of being immersed in it.”

But while it might seem as though abandoned places have stood still since the last people left, Oliver said this often isn’t the case.

He said: “None of these places really stand still. It’s always the case that nature is on the move, reconquering places where humans used to be.

“Or people will dump things or take things. Life always goes on in some form or another.”

In the Atlas, Oliver explores abandoned places from around the globe, looking at their history and the mysterious reasons they were deserted.

The MS World Discoverer was once a luxurious cruise ship, designed to carry wealthy passengers around the globe.

But after hitting a reef in the Solomon Islands, the ship was grounded and all 99 passengers were evacuated.

Efforts to salvage the ship were unsuccessful and greenery has sprouted from the once lavish cabins.

“It’s quite a poetic story seeing this thing that was designed to go around the entire world to some of the most difficult environments and now it’s stationary for the rest of its life, being prised apart by the tides”, says Oliver.

Some of the places in Oliver’s book were once monuments to ideologies and were deserted after leaders lost power.

The Buzludzha Monument in Bulgaria was once built as a tribute to Communism. After the collapse of the Eastern Bloc, the monument was deserted and has since fallen into disrepair.

Oliver believes another part of the attraction of abandoned places is the glimpse they offer into a possible apocalyptic future.

He said: “We’re seeing them as premonitions in a way in an age where we’re confronted by catastrophe in many different directions.

“I think imagining a future without people is ranked quite highly among the reasons why people visit.”

Oliver said: “There are some places that are easily accessible where you can buy a ticket and wander in.

“At the extreme end of the spectrum there are places where if you walked in you’d find a heavy hand on your shoulder or even worse.”

But not every abandoned place is left to nature, people also regenerate and rebuild deserted buildings.

Oliver said: “Places slip in and out of abandonment. We wouldn’t really say ancient ruins like Stonehenge are abandoned because the distance between us and the people that used it is so long ago.

“Everywhere in this book is in a state of flux. And I wouldn’t be surprised if half of them get rescued and the other half fall to bits and that’s the end of it.”

The Atlas of Abandoned Places: A Journey through the World’s Forgotten Wonders by Oliver Smith was published by Octopus Books on October 6 and is available from Amazon, Waterstones and other major retailers.