Revealed: The strangest books ever written, from tomes bound in human skin to a bible that conceals a pistol and a passage of ‘Martian writing’ channelled through a psychic

Author Edward Brooke-Hitching spent nearly a decade searching for the weirdest books in the world – and his investigations have paid off in spellbinding style.

He has bound together a cornucopia of curiosities in a fascinating tome called The Madman’s Library, published by Simon & Schuster, which reveals the strangest books and manuscripts ever written, and the stories behind their creation.

He documents books bound in human skin, a commode disguised as book, a bible that conceals a pistol, cryptic passages that not even military codebreakers can crack, Martian writing channelled through a psychic, pacts with the Devil, a war diary written on a violin, books so minuscule they’re invisible to the human eye and a giant medieval book that weighs 74kg.

Simon & Schuster says that ‘every strand of strangeness imaginable (and many inconceivable) has been unearthed and bound together for a unique and richly illustrated collection’.

Brooke-Hitching, meanwhile, sums it up thus – ‘the forgotten recollected’.

Scroll down for a peek at some of the oddball tomes he has uncovered, and pipe up if you think you’ve decrypted the mysterious Voynich Manuscript… 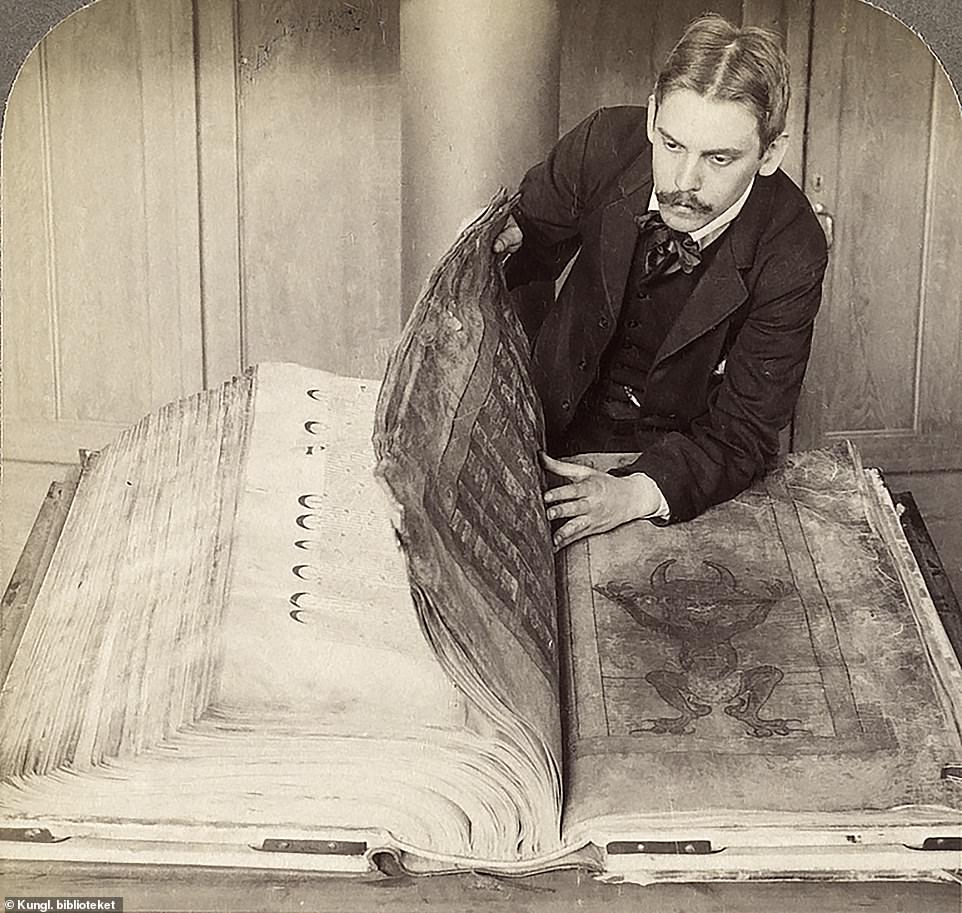 Behold The Codex Gigas (or Devil’s Bible), which Brooke-Hitching explains is the largest existing medieval manuscript. The 74kg tome is said to have been written in one night by a monk charged with diabolic power, he says. It resides in the National Library of Sweden in Stockholm 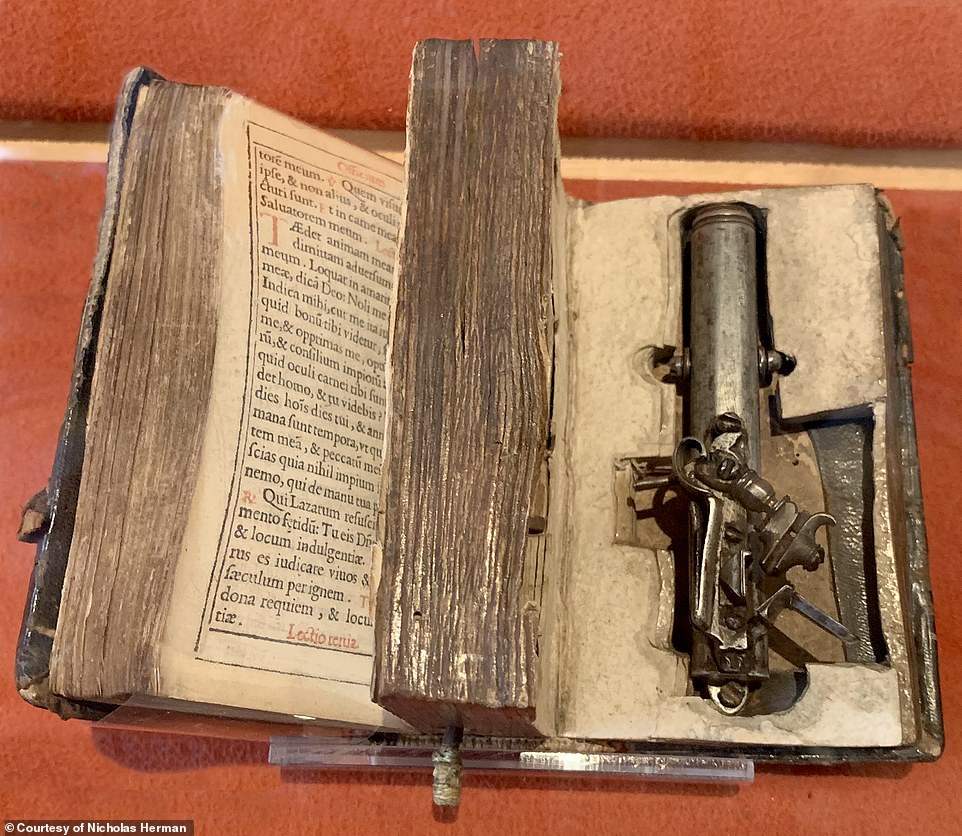 This picture shows an extraordinary Italian ‘prayer book pistol’, which was custom-made for Francesco Morosini, the Duke of Venice (1619-94), reveals Brooke-Hitching. The gun, he explains, was likely used for personal protection and can only fire when the book is closed via a trigger-pin concealed in silk thread that’s designed to look like a bookmark 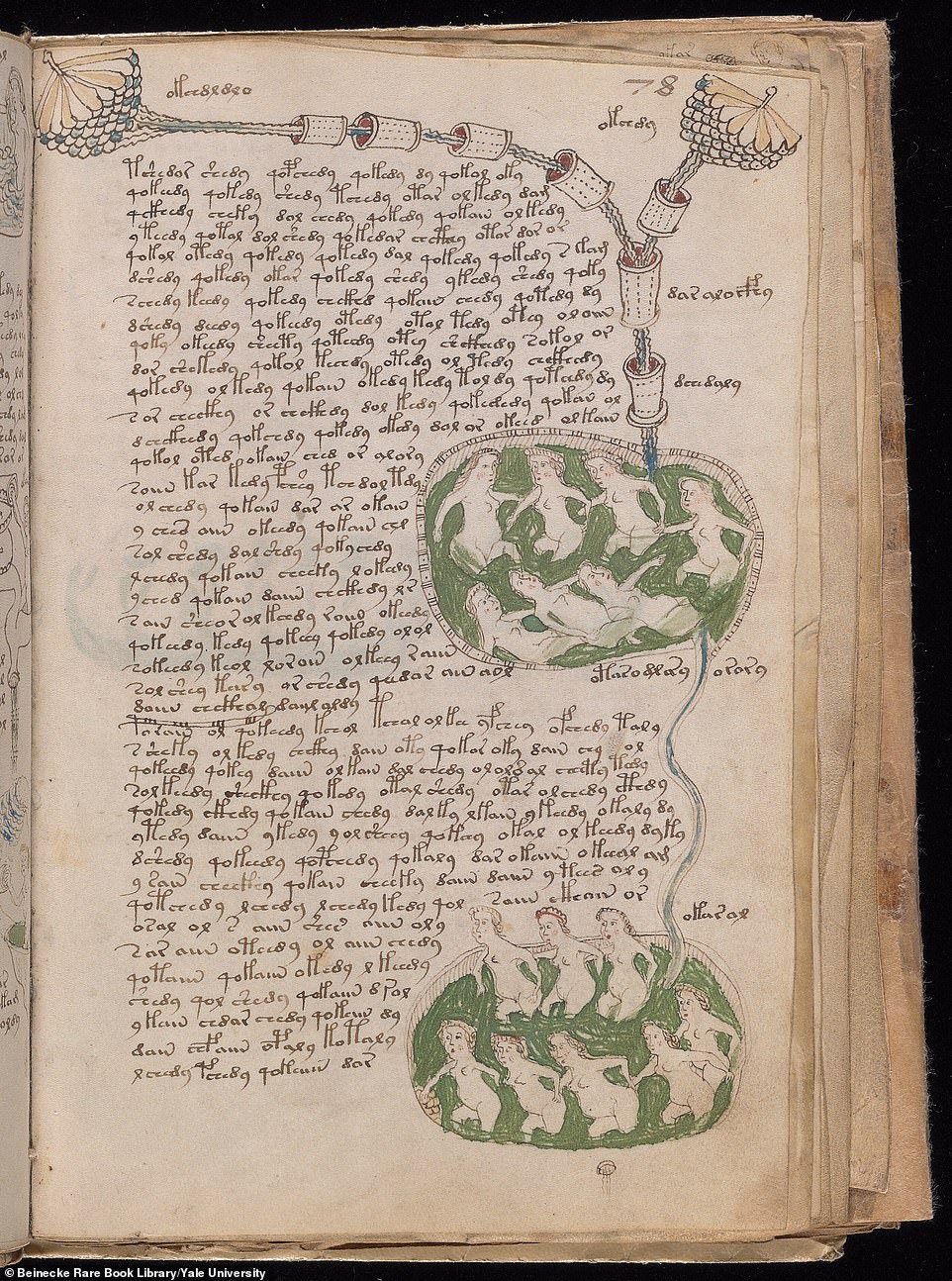 Can you work out what this page says? If you can, then you’ve outsmarted some of the world’s finest cryptographers, including British WWII codebreakers. The page is from the Voynich Manuscript, which is named after the Polish rare book dealer, Wilfrid Voynich, who found it in 1912 in an Italian village. It’s thought to date to the 15th century – but to this day, no cryptographer – amateur or professional – has been able to decipher it. It could be aliens, it could be seventh-century Cornish, it could be a hoax. So what do we know? Not much, says Brooke-Hitching, beyond the fact that the author was right-handed. It currently resides at Yale University’s Beinecke Rare Book and Manuscript Library 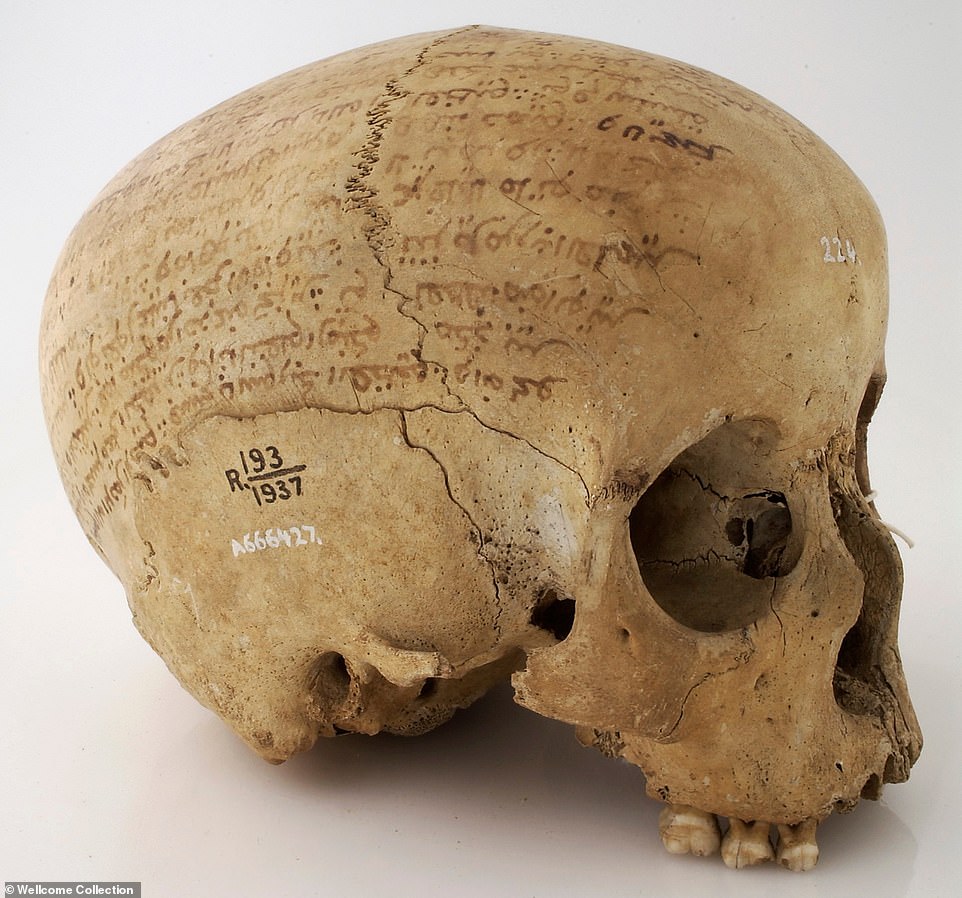 A human skull covered in prayers for the deceased that resides in the Wellcome Collection in London. It was collected by Robert Baden-Powell during an expedition to Ghana in 1895 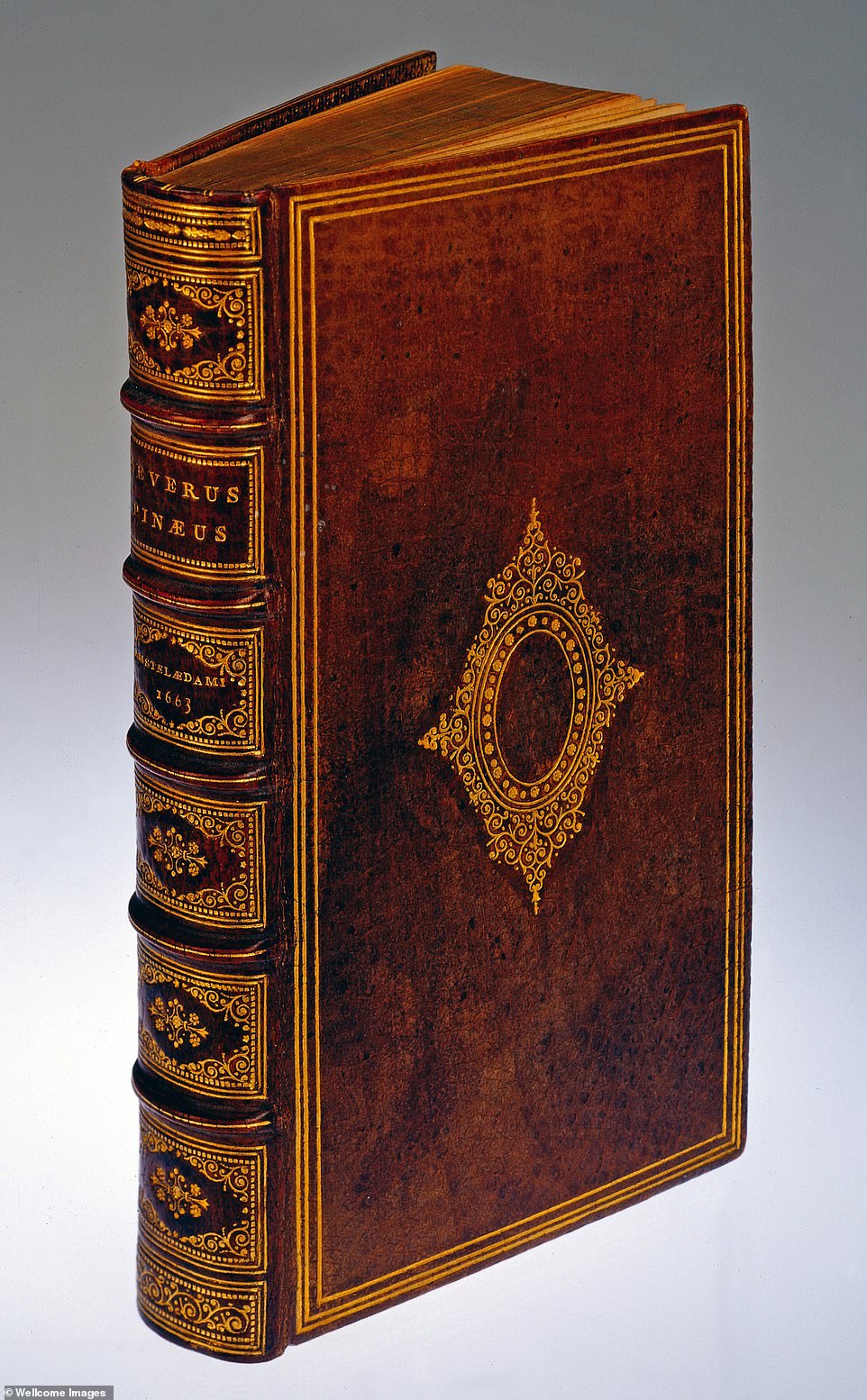 This book is bound in human skin. Its title is A Treaty on Virginity, Pregnancy and Childbirth and it was penned by Severin Pineau and printed in Amsterdam in 1663. Brooke-Hitching says that a note by the book’s owner, Dr Ludovic Bouland, reveals the nature of the macabre material used to bind it: ‘This curious little book… has been re-dressed in a piece of the skin of a woman tanned for myself.’ Brooke-Hitching explains that book-binding with human skin dates back to at least the 13th century and that in the 18th and 19th centuries ‘[human skin] became an acceptable decorative extra when publishing accounts of murderers’ crimes and medical studies’. He adds that ‘a human-skin book was also, frankly, a great thing to show off at parties’ 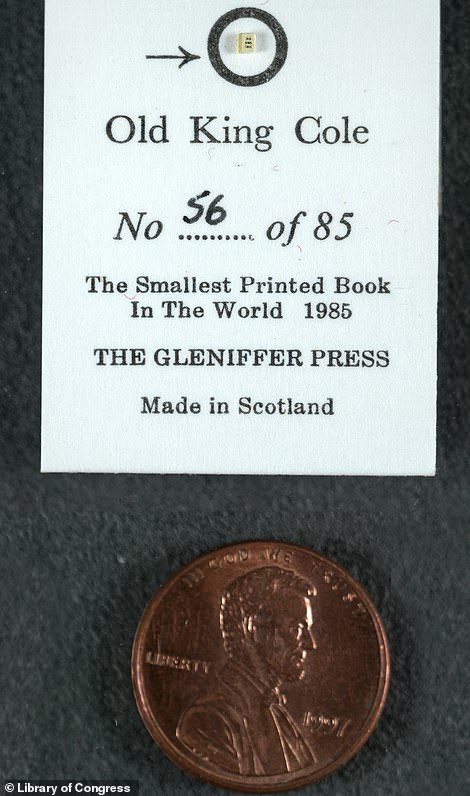 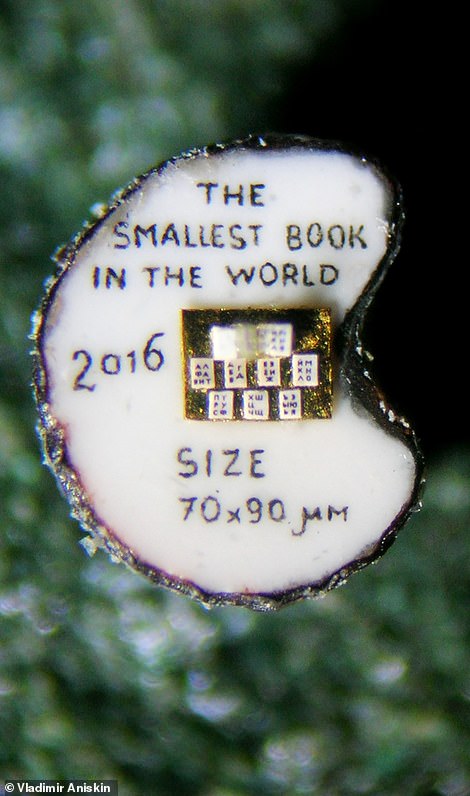 LEFT: The 12-page Old King Cole book issued by Gleniffer Press in Scotland in 1985. It measures 1mm by 1mm and Brooke-Hitching says that its pages can only be turned using a needle. RIGHT: The 2016 smallest book in the world, by Russian physicist Vladimir Aniskin, which contains letters just 15 micrometres tall, sprayed using a lithographic stencil. The letters spell out the character names from the 1881 story by Nikolai Leskov called The Tale of Cross-eyed Lefty from Tula and the Steel Flea, which tells the tale of engravers who make inscribed shoes for clockwork fleas. ‘Aniskin cleverly trumped them all,’ says Brooke-Hitching 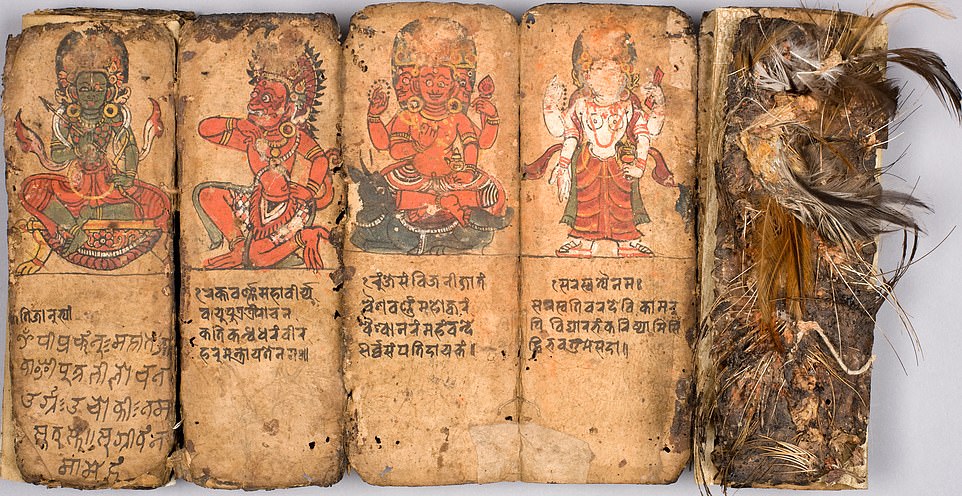 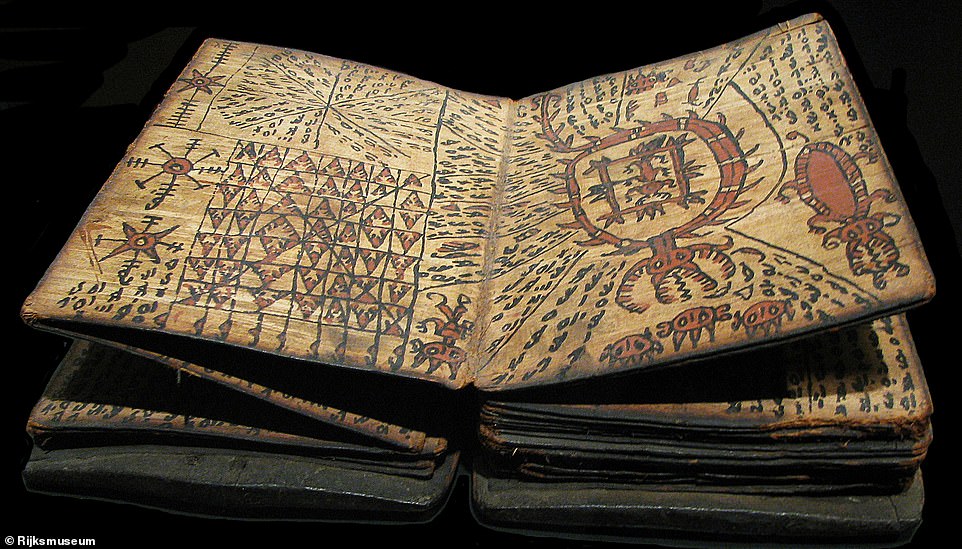 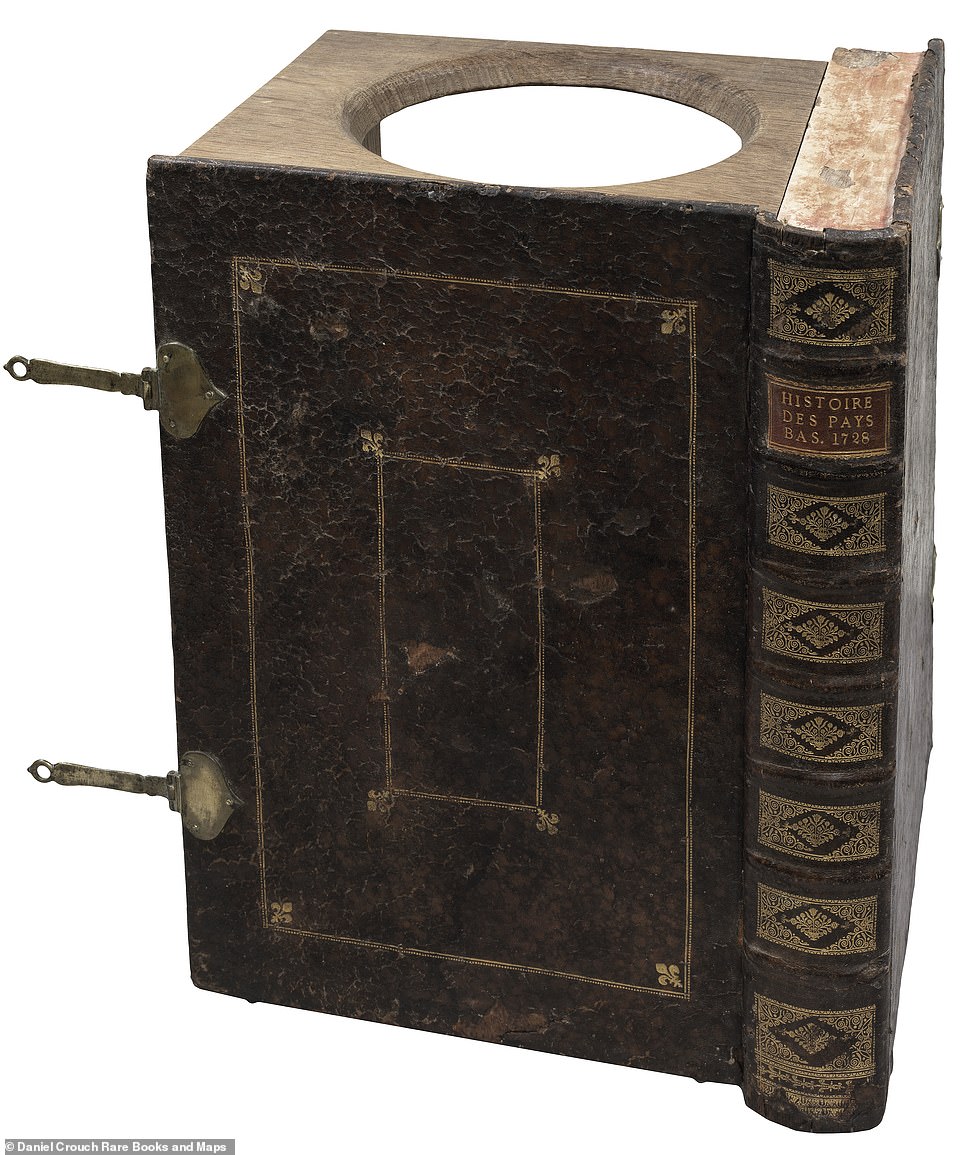 This is a remarkable portable oak commode disguised as a book with the title A History of the Low Countries (Histoire des Pays Bas). It was made in France in 1750 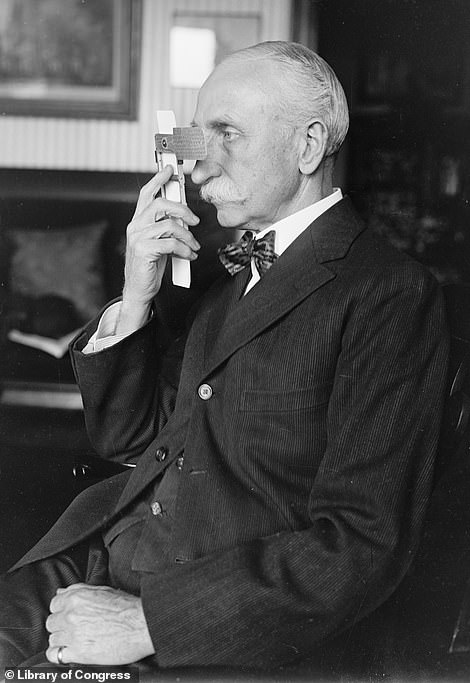 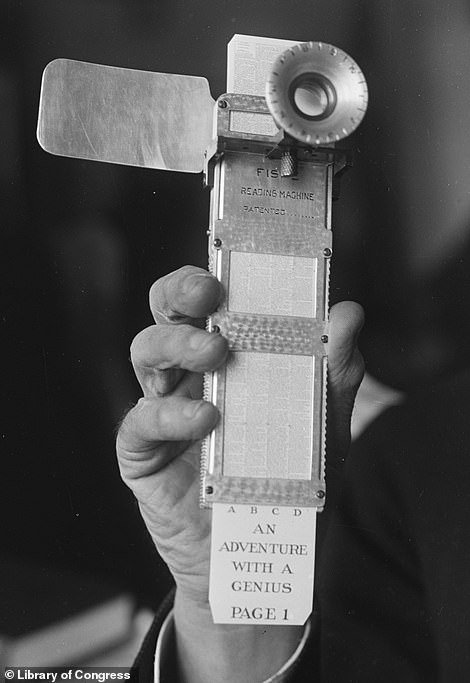 ‘Before Kindles and e-readers,’ writes Brooke-Hitching, ‘in 1922 there was Bradley Fiske’s handheld Reading Machine (above left and right). ‘The metal device featured a magnifying lens to read whole books compressed into text too small for the human eye to read, printed on cards 15.24cm high. To demonstrate, Fiske showed journalists the first volume of Mark Twain’s Innocent Abroad (around 93,000 words) condensed to 13 cards’ 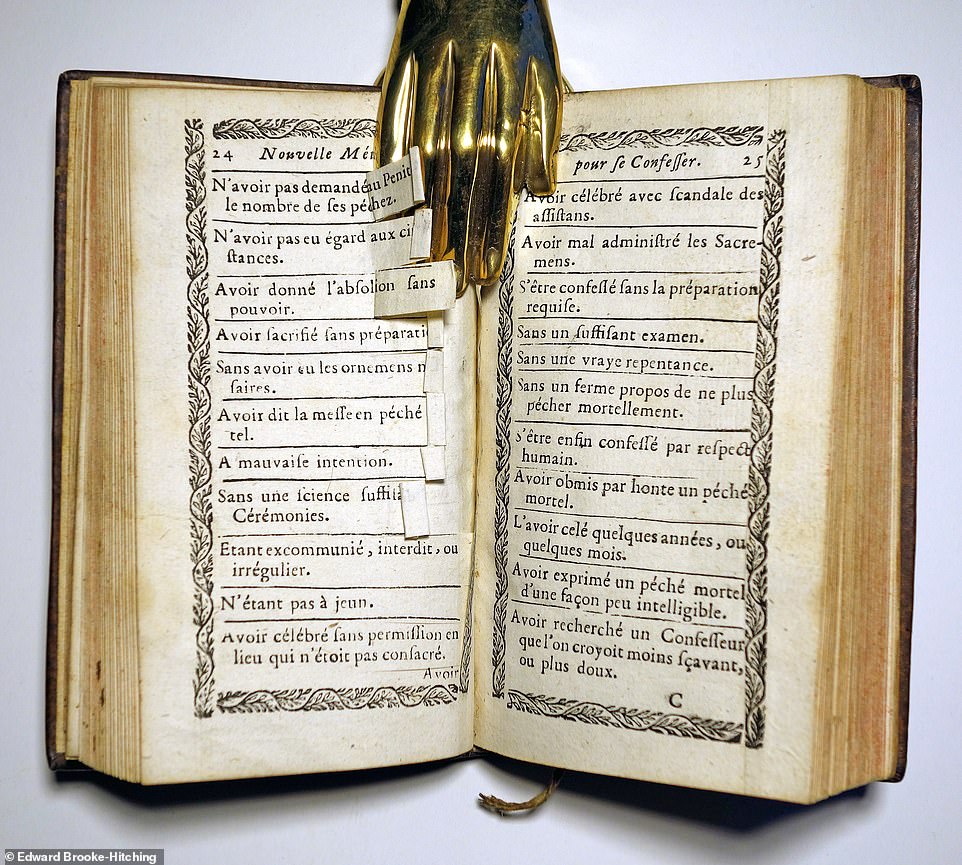 This intriguing 18th-century pocket confession book contains ‘tear-out sins’. It served, explains Brooke-Hitching, as an aide-memoire for forgetful sinners. It contains all the known sins and enables those about to confess to gen-up on their wrong-doings. Sins in the book include ‘spewing blasphemies’ and ‘having learned only vanity.’ The book pictured above belongs to Brooke-Hitching and was published in 1721 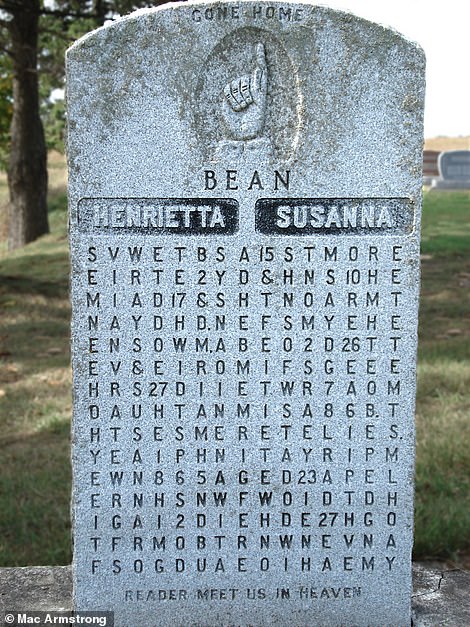 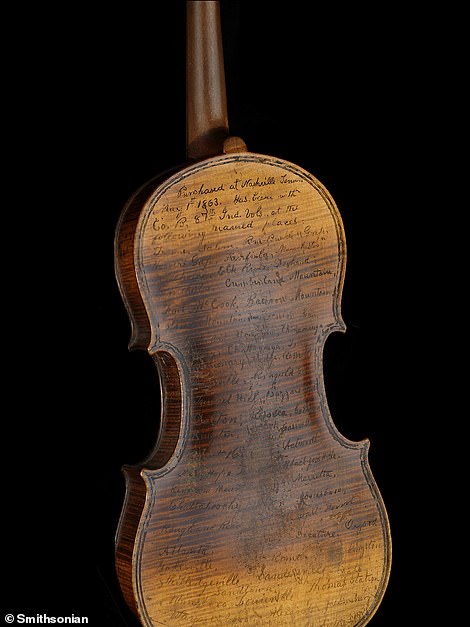 LEFT: A cryptic tombstone erected by Canadian doctor Samuel Bean in Rushes Cemetery near Crosshill, Wellesley Township, Ontario, in memory of his first two wives, Henrietta and Susanna. Brooke-Hitching reveals that starting on the seventh character from the left in the seventh row down, and progressing in a jagged anticlockwise spiral pattern, the inscription reads: ‘In memoriam Henrietta, 1st wife of S. Bean, M.D. who died 27th Sept. 1865, aged 23 years, 2 months and 17 days and Susanna his 2nd wife who died 27th April, 1867, aged 26 years, 10 months and 15 days, 2 better wives 1 man never had, they were gifts from God but are now in Heaven. May God help me, S.B., to meet them there.’ RIGHT: The battle diary of Union soldier Solomon Conn, etched into his violin. Brooke-Hitching explains that in 1861 Conn enlisted in the Union-supporting 87th Indiana Infantry after the outbreak of the American Civil War, bought the violin in 1863 – and carried it everywhere he went. He never learned to play it, but instead used it as a surface to describe the battles he fought 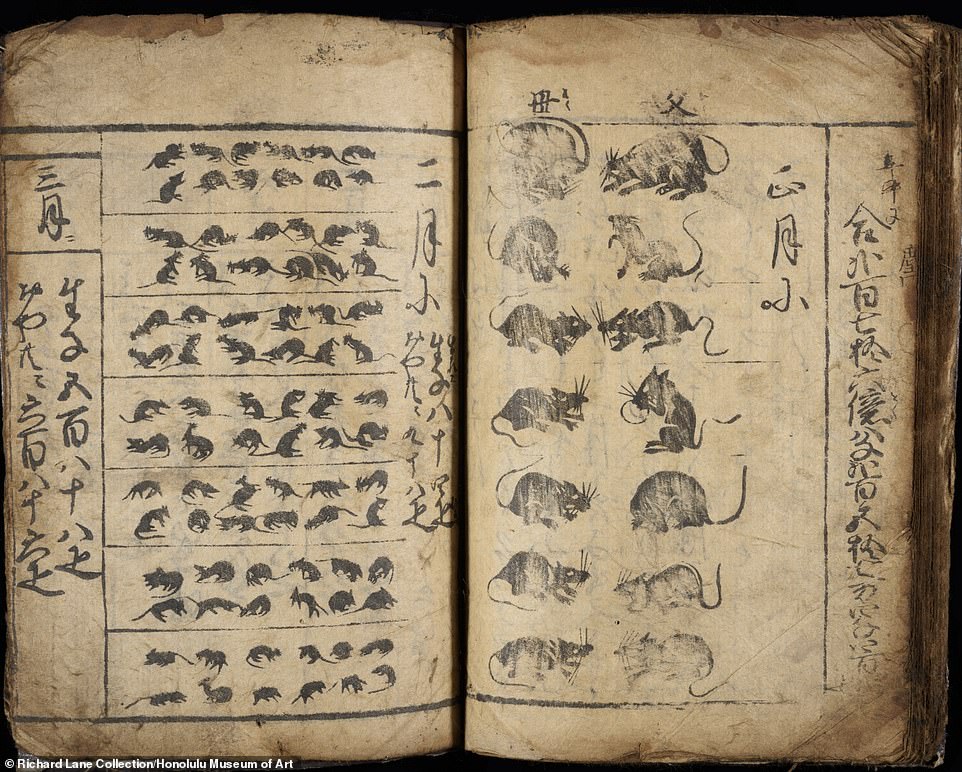 Brooke-Hitching describes the 17th-century manuscript above as ‘extraordinary’, which is saying something in this company. It’s called A Manual of Mathematics (Jinkoki), with the unknown author using pictures of rats ‘to illustrate complex geometric progression and the calculation of the volume of 3D figures’ 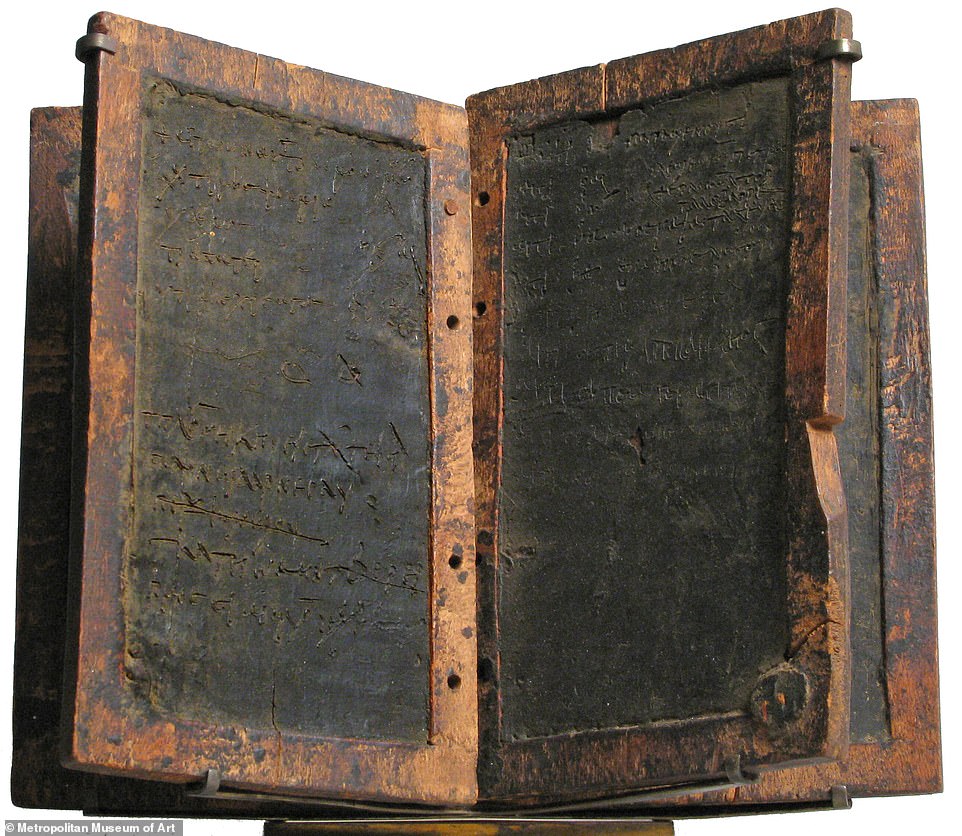 Wooden writing tablets from 500-700AD Byzantine Egypt. Brooke-Hitching explains that the recessed areas were filled with wax and writing scratched onto the surface with a wooden stylus 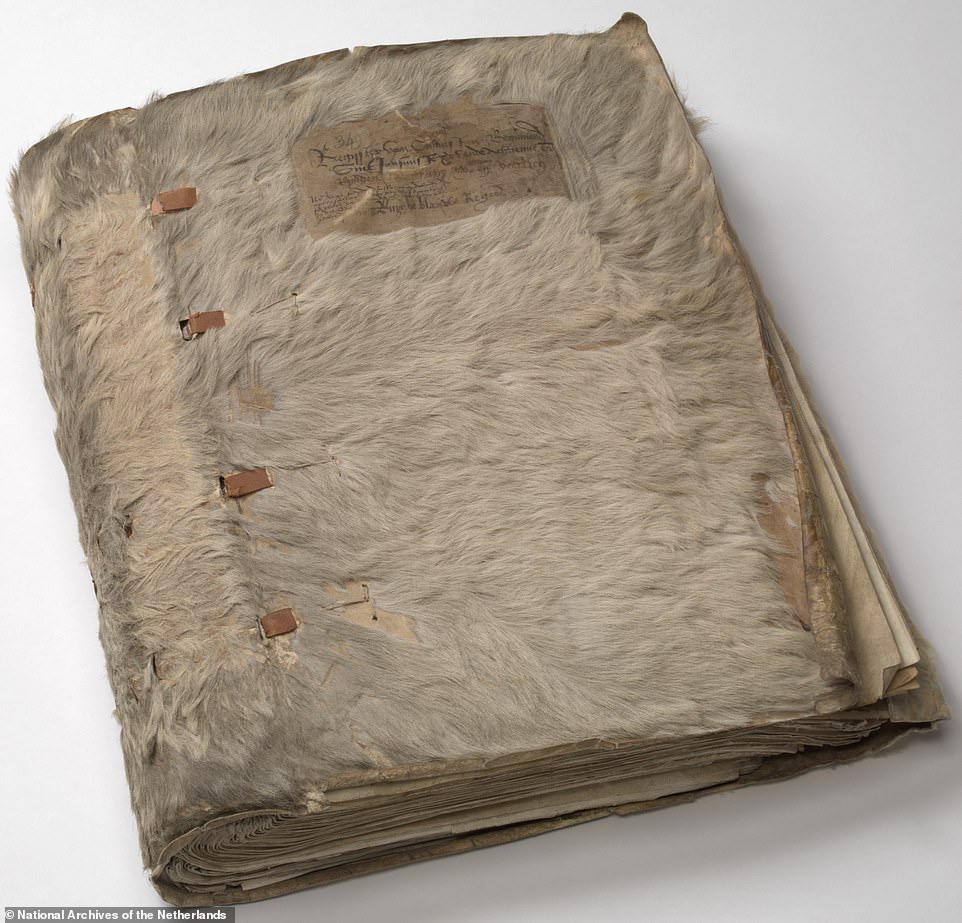 This is the 16th-century Ruige blauwe register (The Hairy Blue Register) of the Court of Holland, a cow-hide-covered tome that recorded who had what position in government 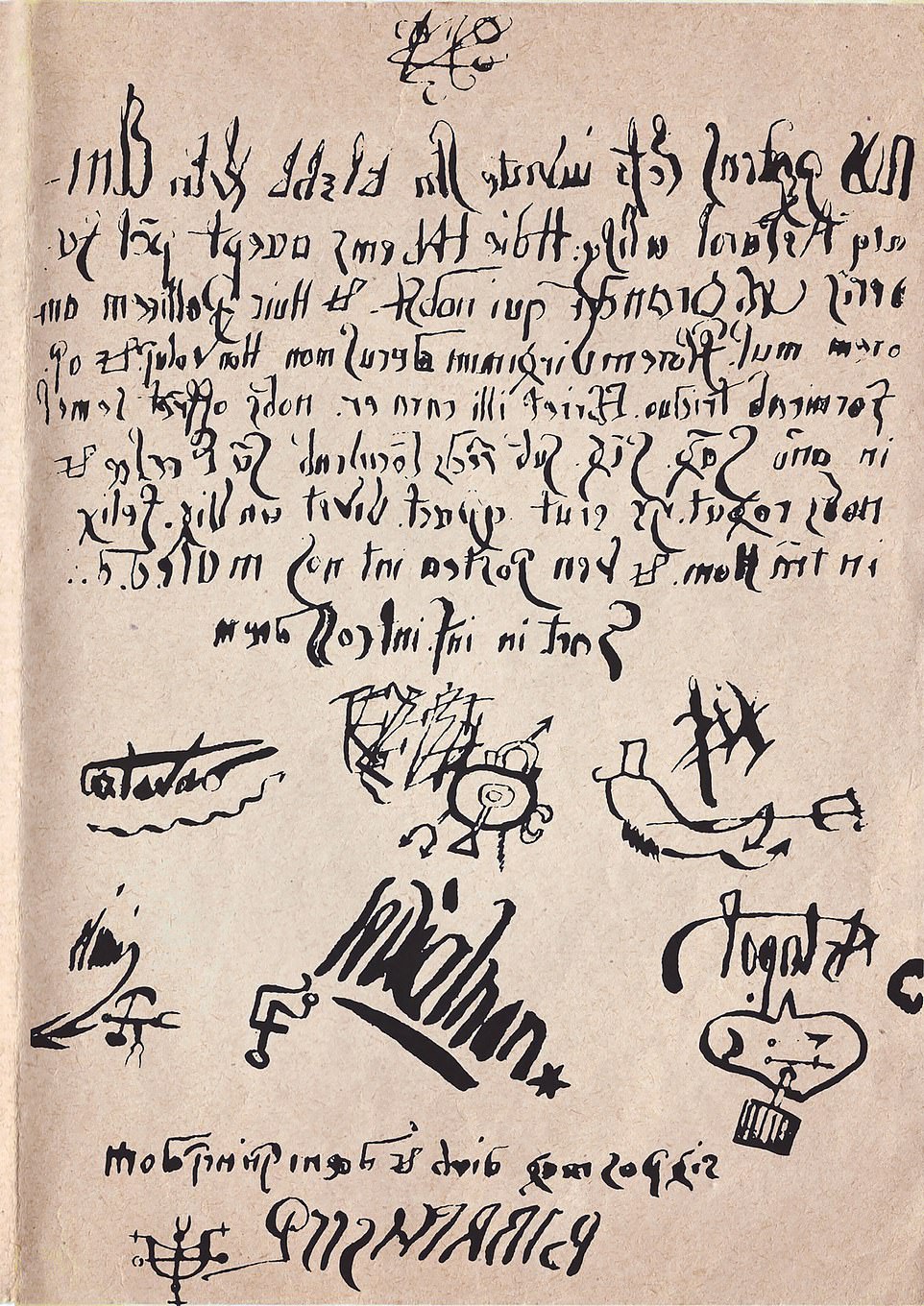 This manuscript was purported to be a ‘pact’ signed by Lucifer and the French Catholic priest Urbain Grandier, who was executed in 1634, Brooke-Hitching explains, for ‘summoning evil spirits to possess  a convent’. This pact, written in backwards Latin and signed by Lucifer and his demonic cohorts, was published as ‘proof’ 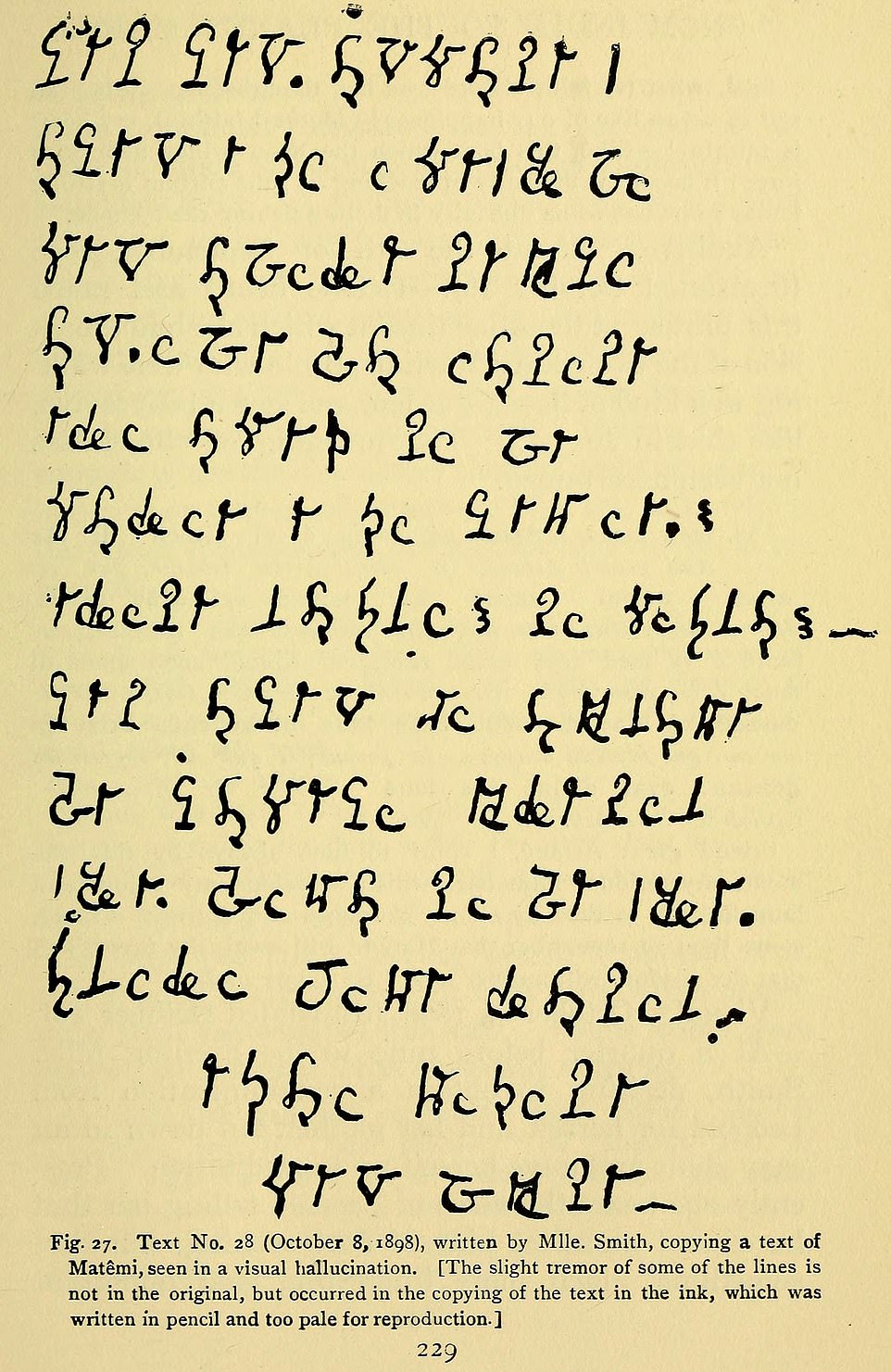 Is it aliens? It’s aliens. This is ‘a passage of Martian writing channelled through the hand of the French psychic Helene Smith’ as found in the 1899 book From India to the Planet Mars by University of Geneva psychologist Theodo Flournoy, which documented her powers 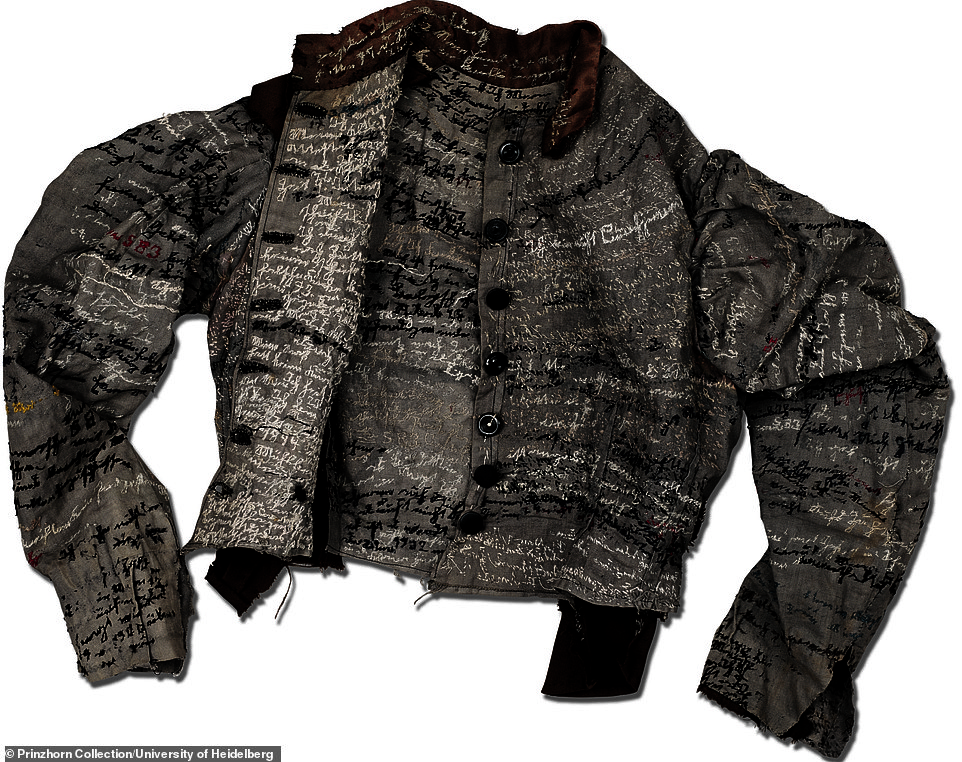 One of several ‘books that aren’t books’ documented in Brooke-Hitching’s amazing tome. This is a picture of an embroidered jacket that belonged to a seamstress called Agnes Richter who was imprisoned in Heidelberg psychiatric hospital in 1893 until her death in 1918. She embroidered biographical musings in the cloth such as ‘I am not big’ and ‘I wish to plunge headlong into disaster’ 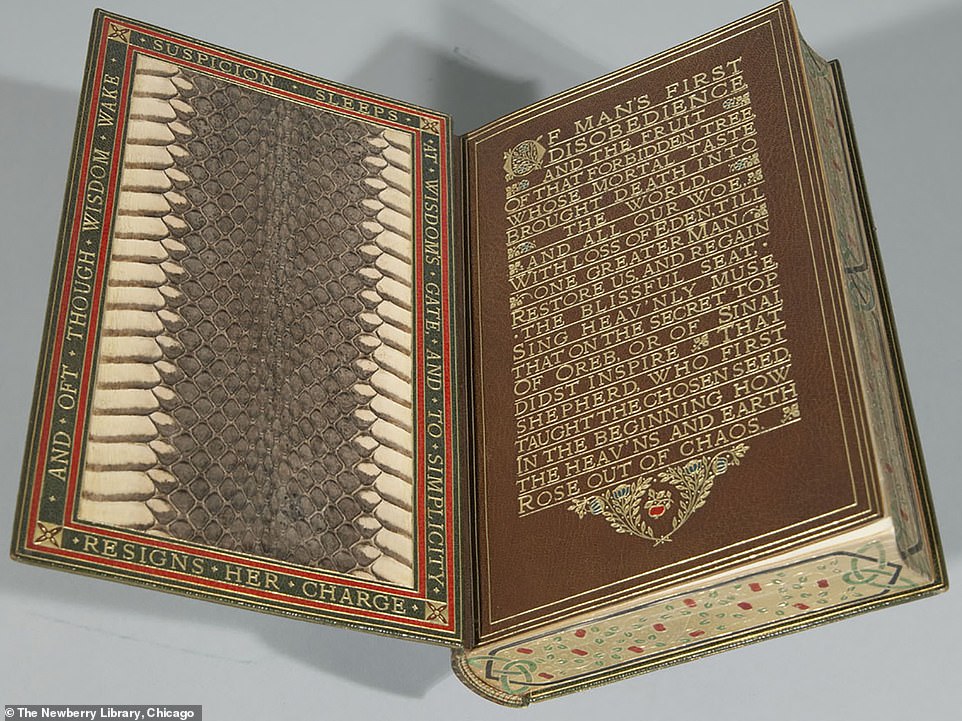 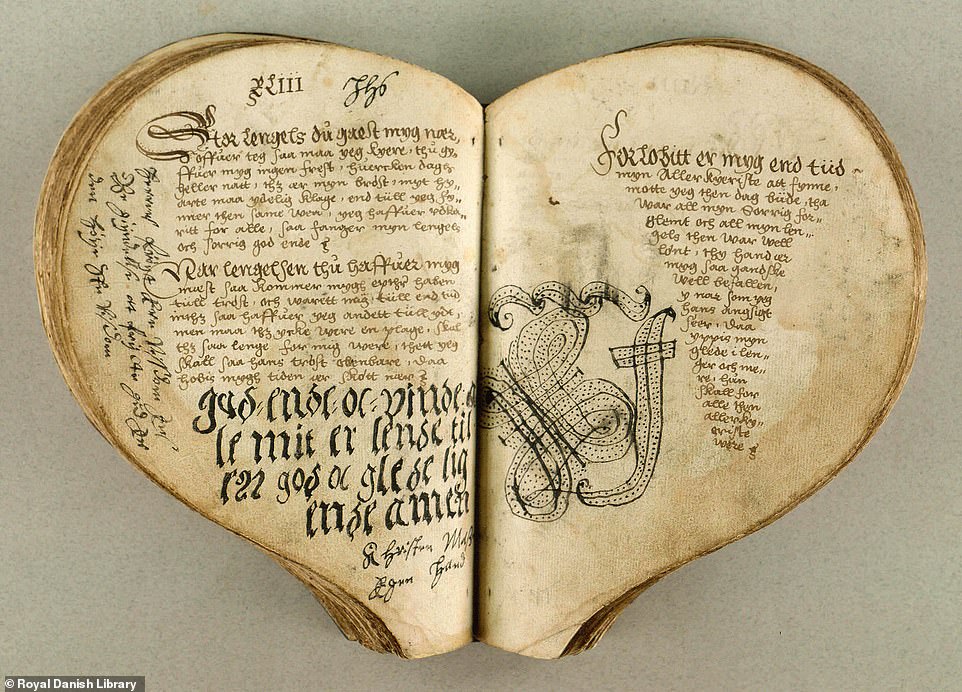 This is The Hjertebogen (Heart Book), a collection, explains Brooke-Hitching, of 83 love ballads created in the 1550s in the circle of the Court of King Christian III of Denmark 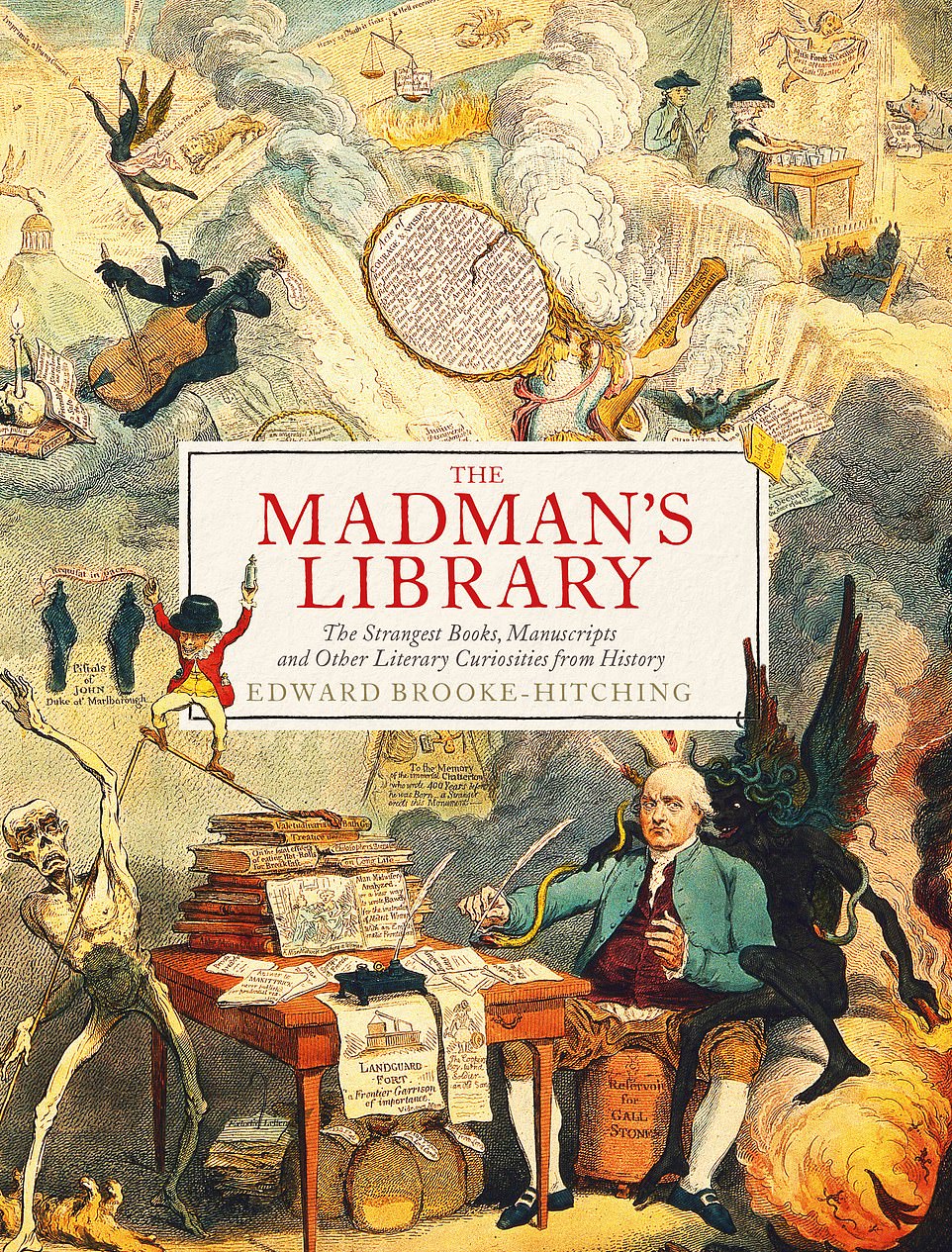 The Madman’s Library by Edward Brooke-Hitching, published by Simon & Schuster, £25.00