See Britain at its most enchanting: Photographer moved to the UK with his family – and took these incredible pictures as they explored their new home

Britons may just see their country in a new light after gazing upon these incredible images, which show it at its most enchanting and ethereal.

They were taken by Romanian Aurel Paduraru just after he moved from Bucharest to Clevedon in North Somerset last year with his wife and young son.

He wanted to explore his new home – so set about travelling to some of the UK’s most enticing areas.

And we can be thankful he took his camera with him.

He told MailOnline Travel: ‘I knew that I would be able to take good pictures here as the places are amazing. Every part of the UK is fascinating and I have some great memories of the places we have visited so far.’

Scroll down to see Britain at its most beautiful… 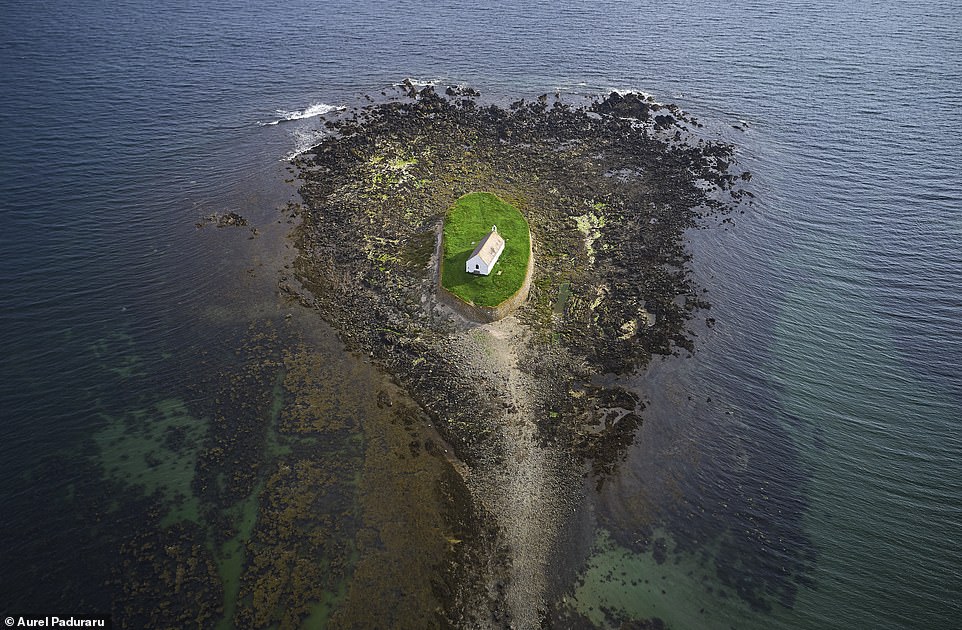 Aurel’s amazing aerial image of the tiny island of Cribinau on the south-west coast of the Isle of Anglesey, on which is perched a simple white-washed Medieval church. Erosion cut the islet off from the mainland 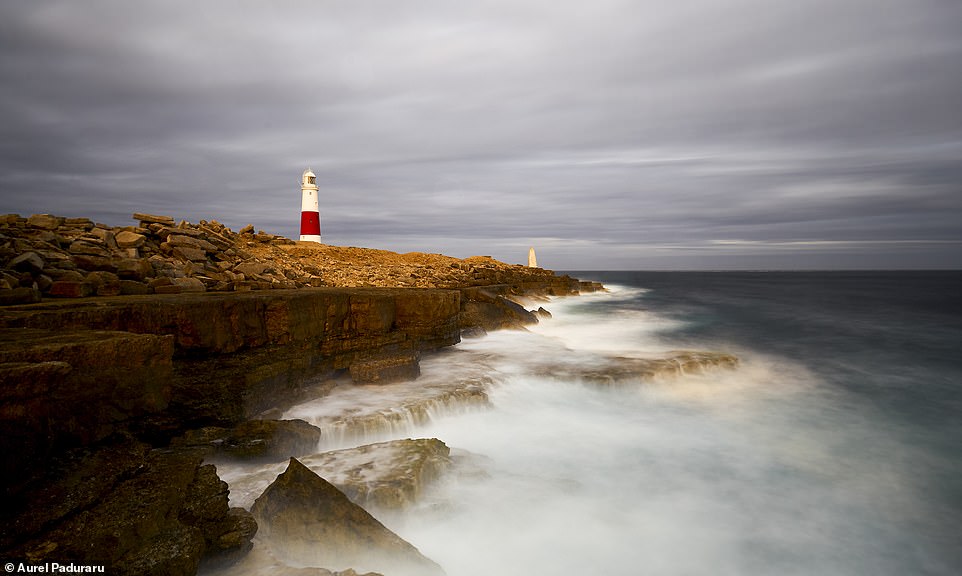 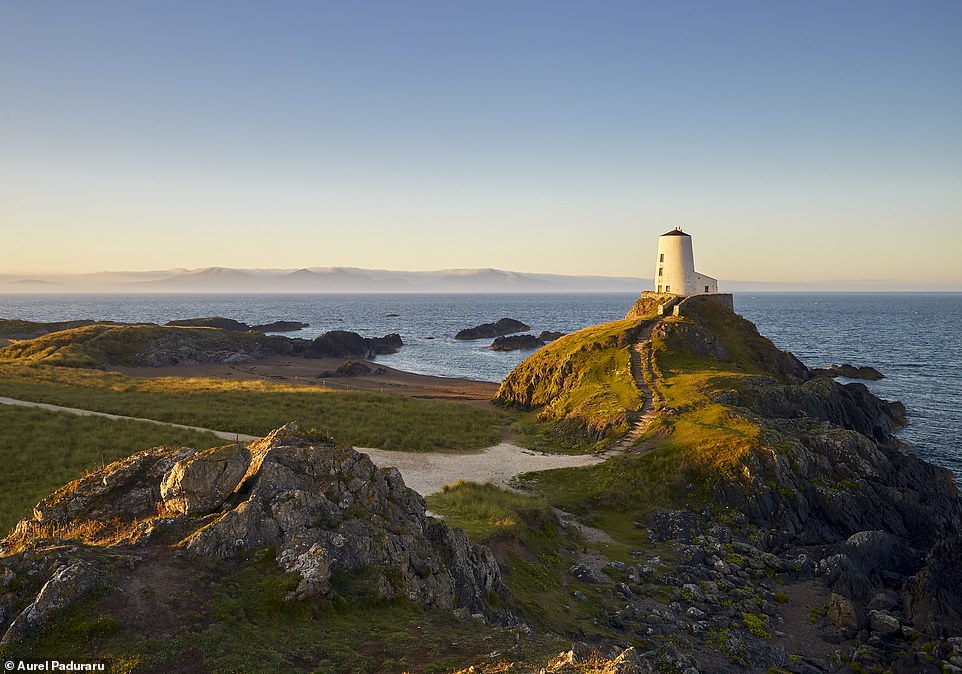 Aurel said he knew he would be able to take good pictures in the UK, adding: ‘The places here are amazing.’ Pictured is the  19th-century 36ft-high Twr Mawr Lighthouse on Anglesey 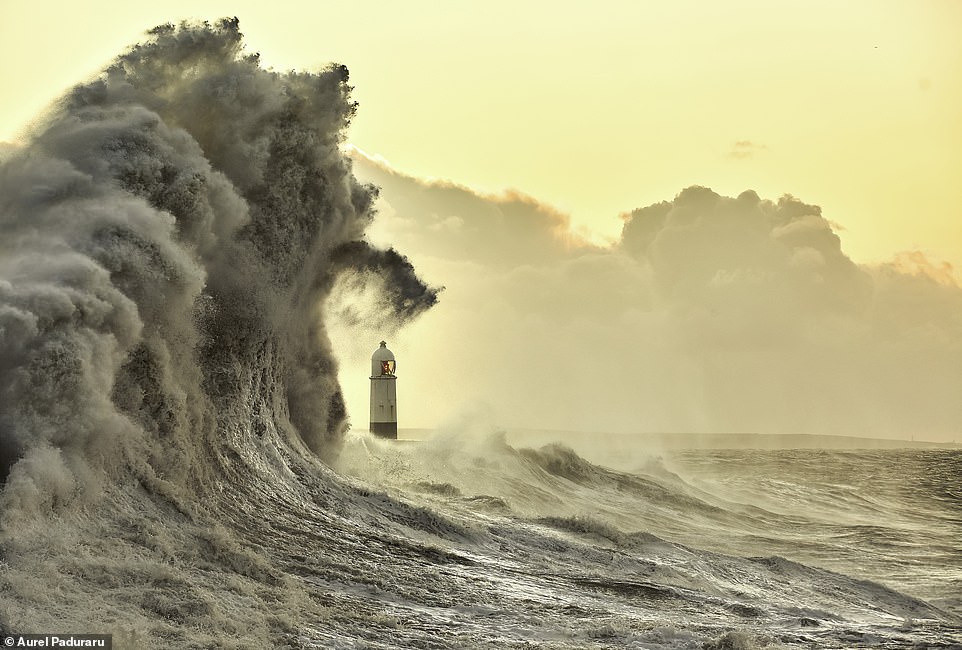 A colossal wave breaks over Porthcawl Pier in Wales and frames the lighthouse in dramatic fashion. The lighthouse was built in 1860 and is 30ft tall 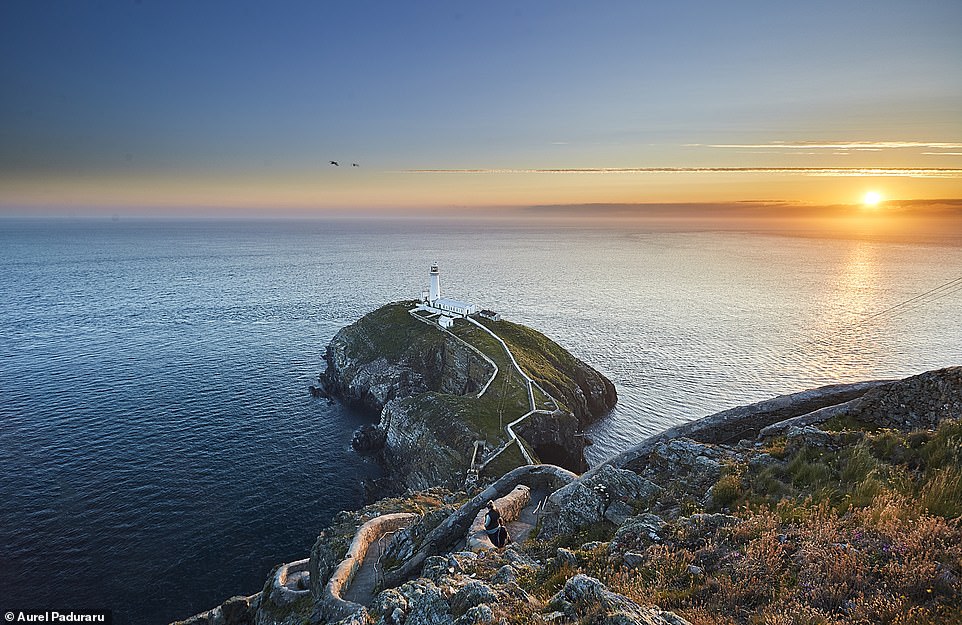 Aurel said that he likes to take his son with him on his travels to ‘keep him away from the TV and computer and to grow his desire to discover the beauty of the natural world’. He captured this scene on Anglesey, with his wife and son gazing upon the 91ft-tall South Stack Lighthouse, which was built in 1809 to warn ships of the treacherous rocks nearby 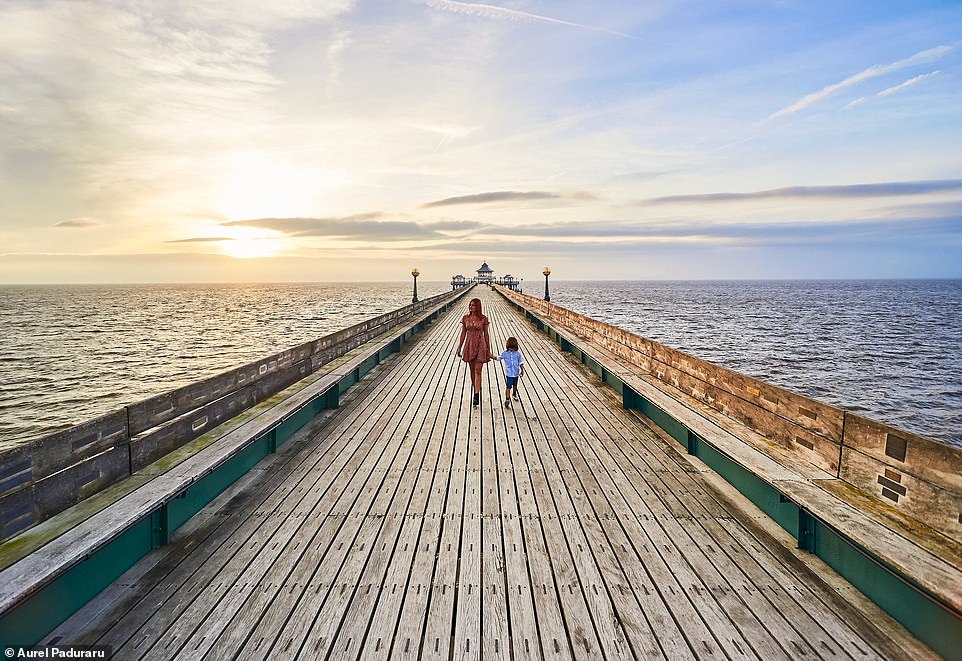 A seductive shot of the eye-catching Clevedon Pier, which opened in 1869 and is now a designated Grade I-listed building. Poet John Betjeman described it as ‘the most beautiful pier in England’ 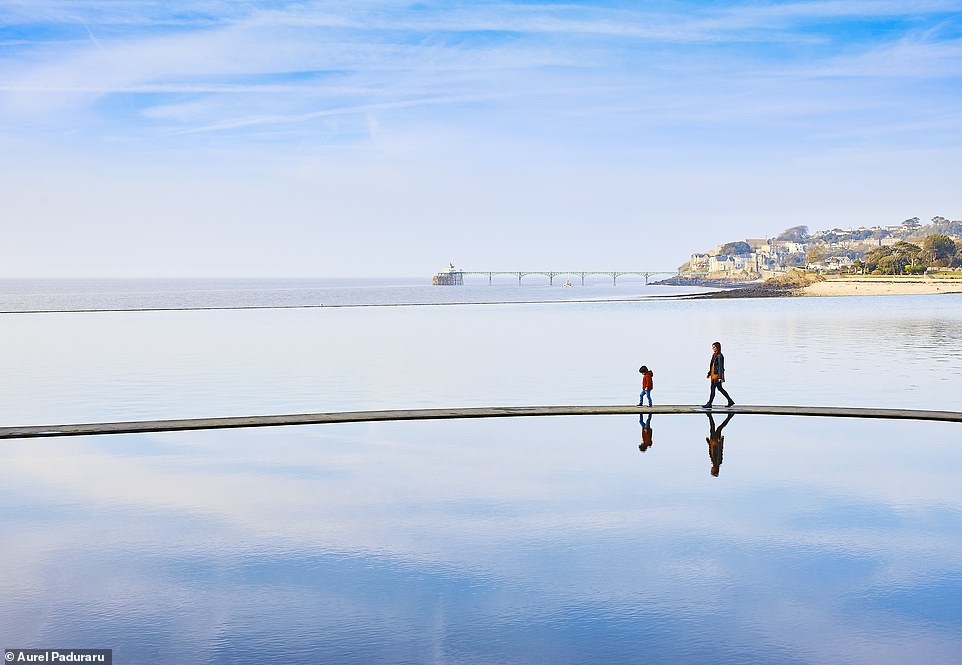 The coastline of Clevedon, which grew in popularity as a seaside resort during the Victorian era. Aurel says it also has a lovely forest 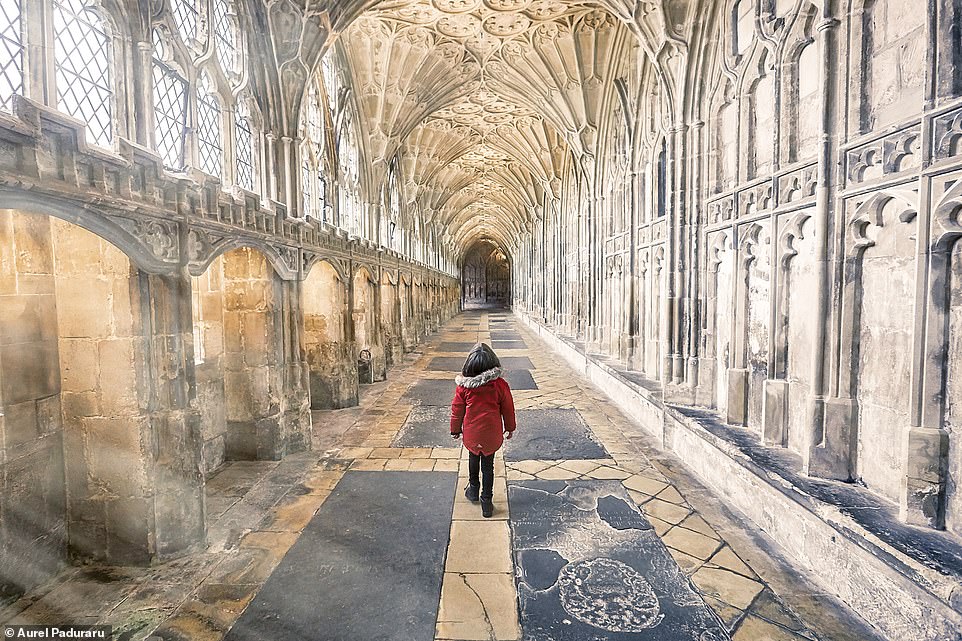 Wand-erful: Aurel’s young son wanders through Gloucester Cathedral, which was built in 678. It has been used as a filming location for the Harry Potter films 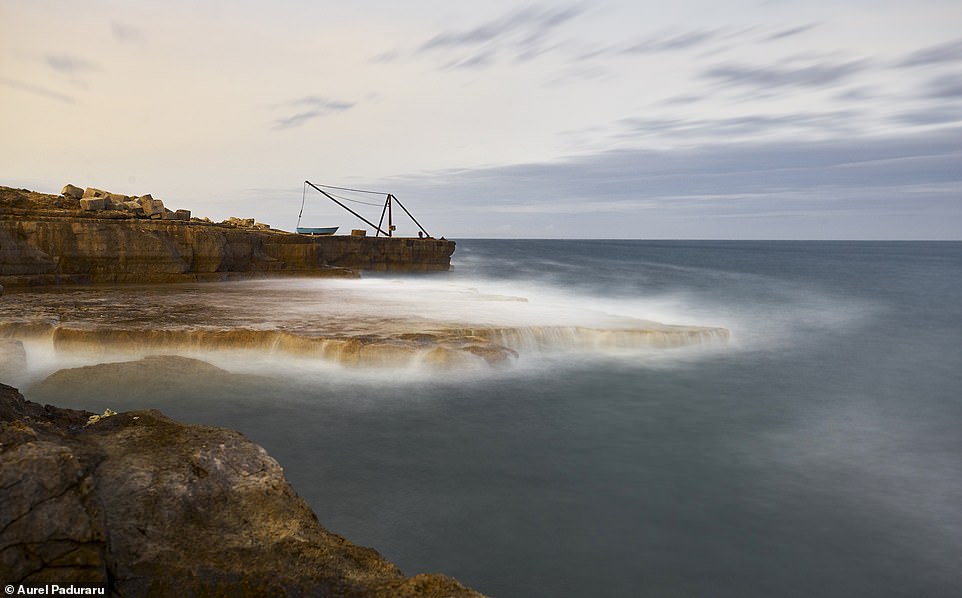 This ethereal shot shows Portland Bill, the southernmost point of Dorset. Aurel said: ‘Every part of the UK is fascinating and I have some great memories of the places we have visited so far’ 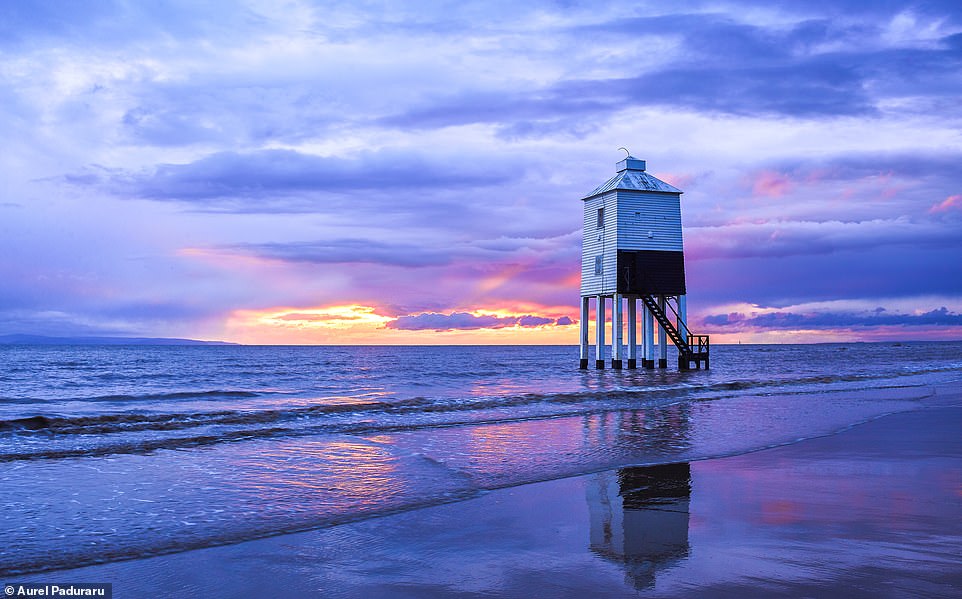 A spellbinding shot of the Burnham-on-Sea Low Lighthouse – aka the ‘lighthouse on legs’. It’s a Grade II listed building dating back to 1832 – and it’s still guiding Somerset mariners 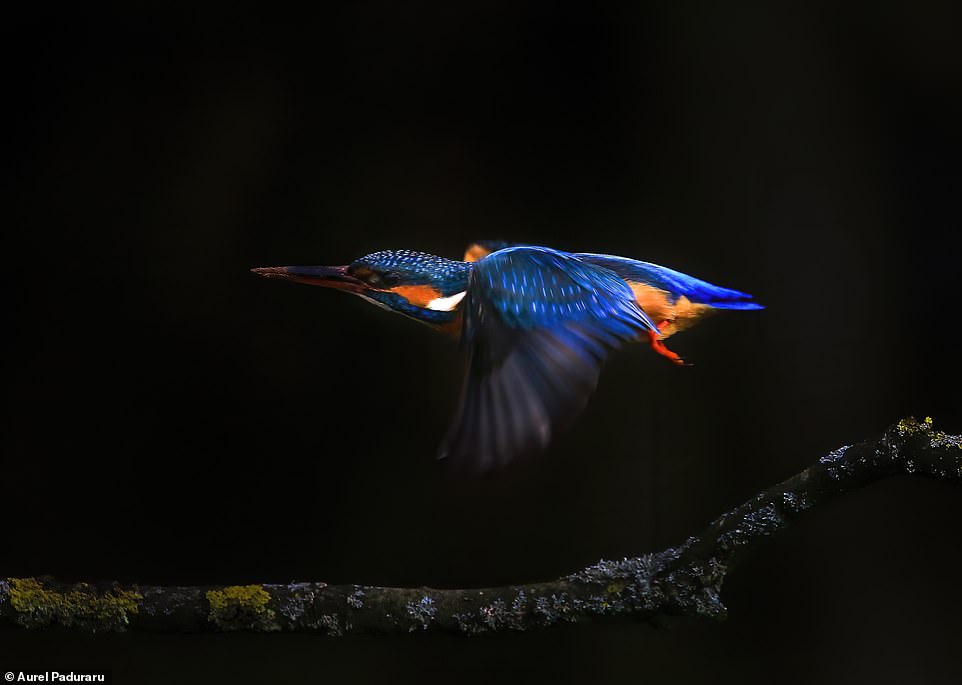 Beak condition: A stunning shot of a kingfisher in the Newcastle area 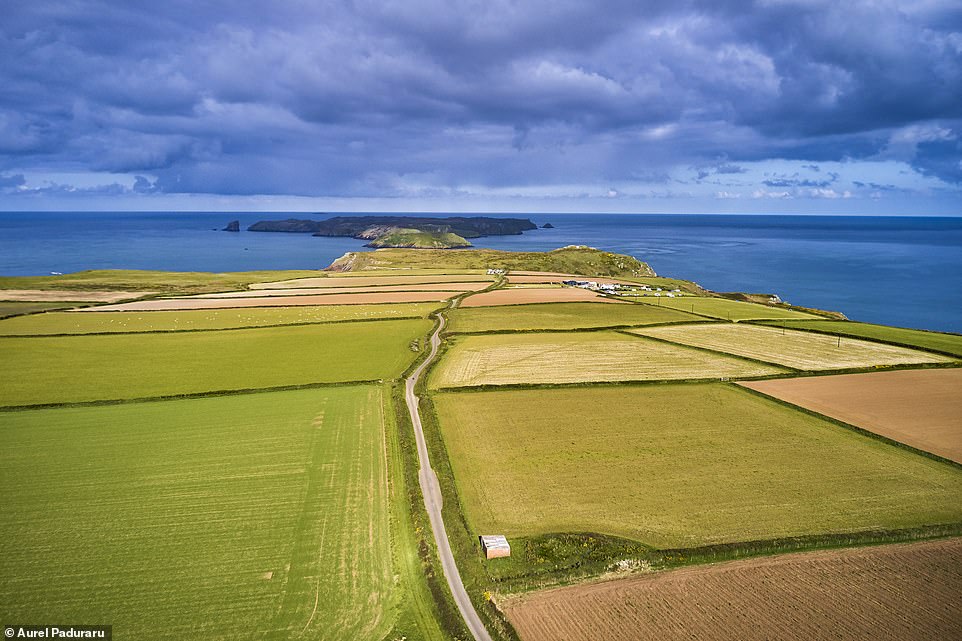 A stunning drone shot of the road to Skomer island in Pembrokeshire, home to a cornucopia of wildlife including voles, rabbits, buzzards, peregrine falcons, owls and puffins 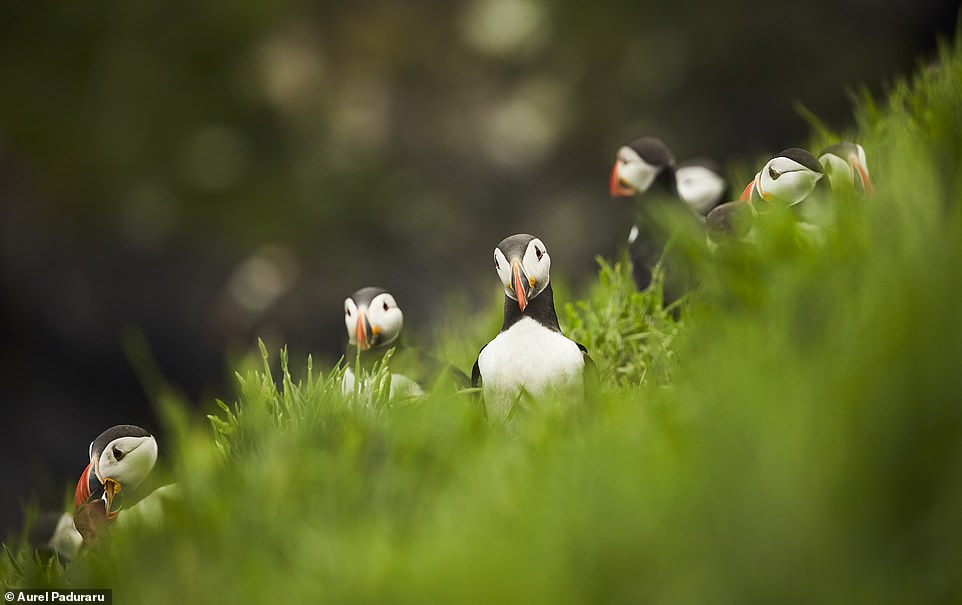 A handful of puffins on Skomer. The birds – which have a lifespan of up to 40 years – are resident on the island between April and August 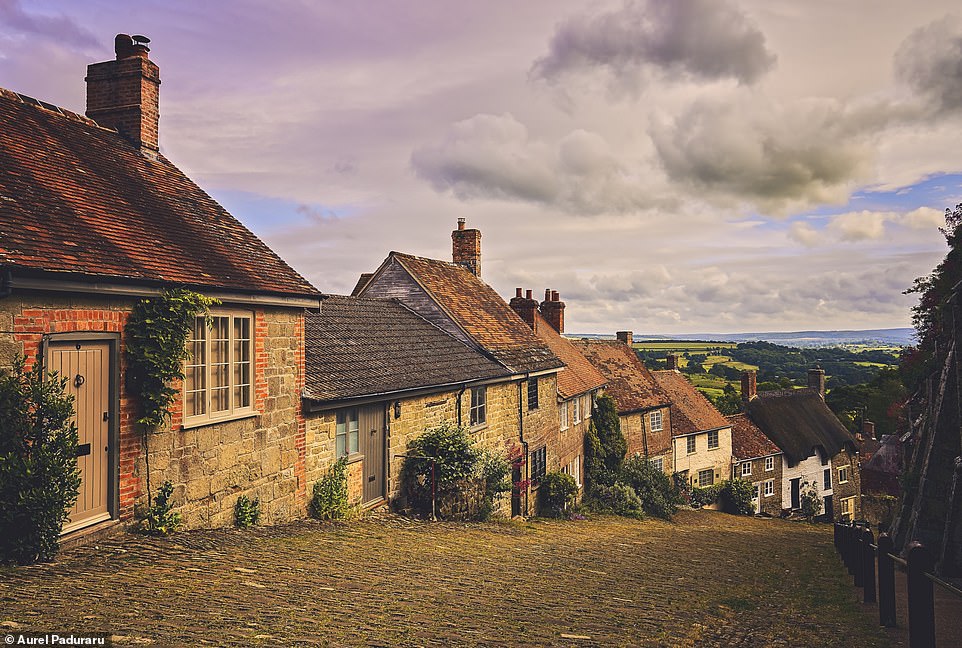 Gold Hill in Shaftesbury, Dorset – a beautiful chocolate box cobbled street that was made famous by an advert for Hovis bread 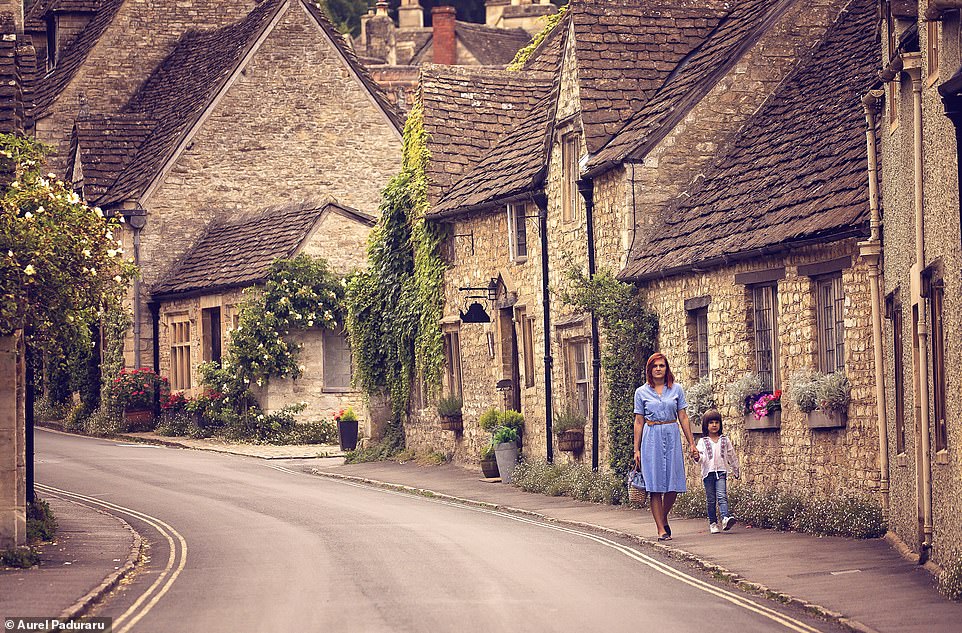 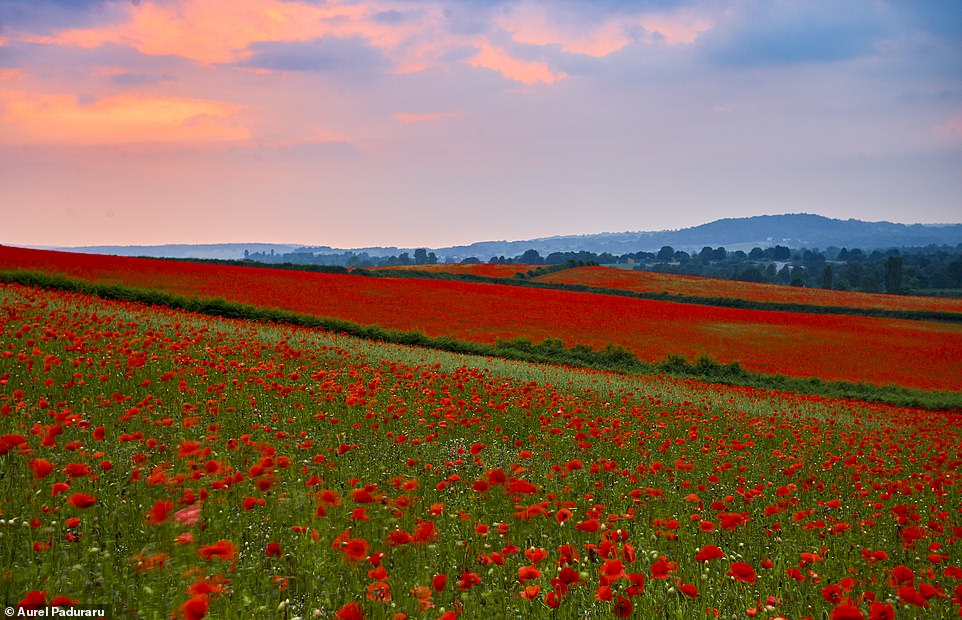 A breathtaking shot of a field of poppies in Burlish Top Nature Reserve, just outside Stourport-on-Severn, North Worcestershire 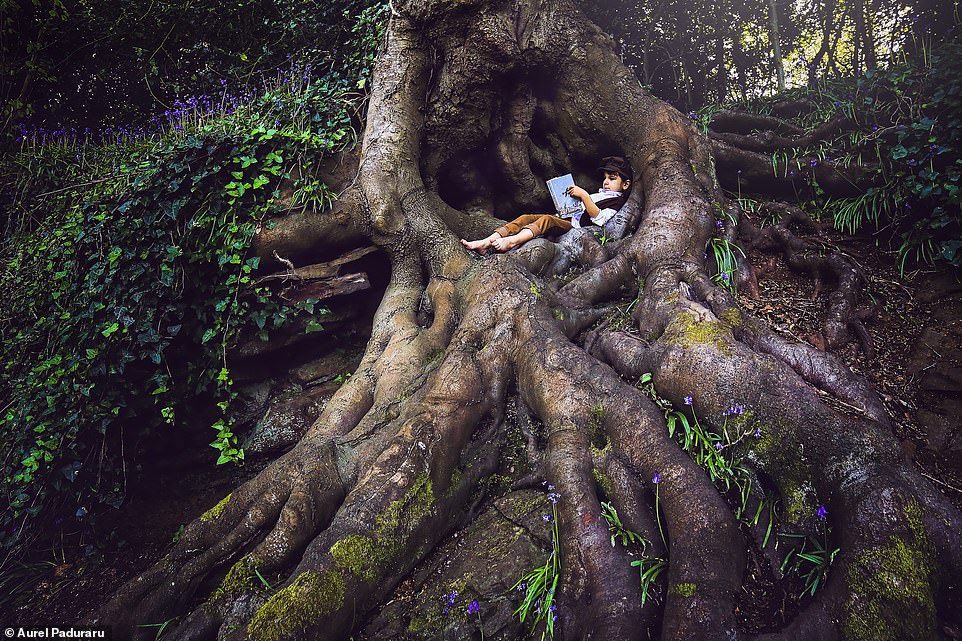 The set of Lord of the Rings? No, this is Aurel’s son relaxing in a huge tree in Clevedon 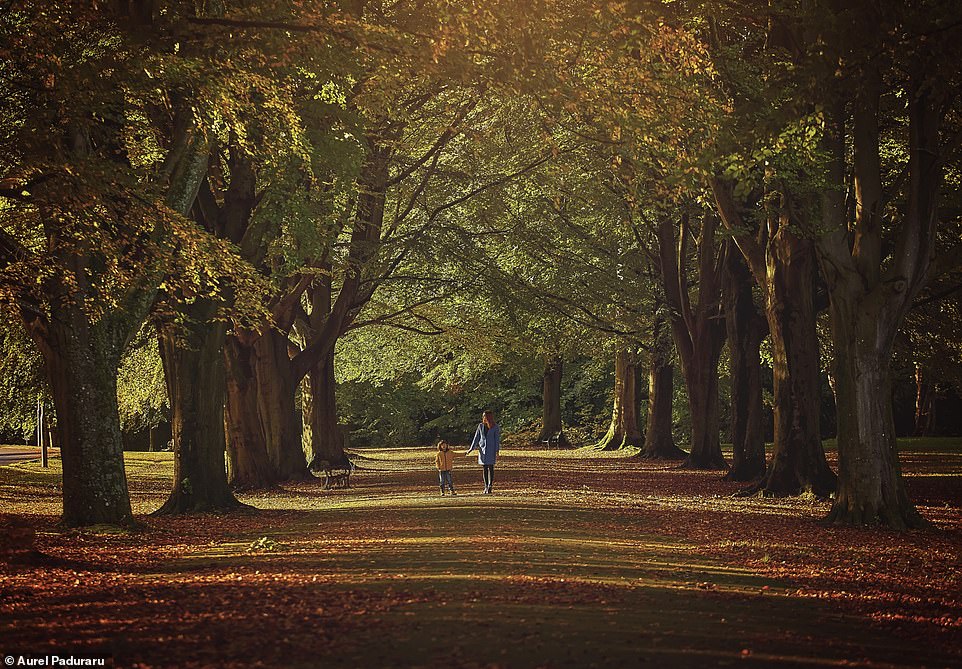 A soothing autumnal scene in the Clifton area of Bristol. Aurel said: ‘We are doing our best to split our time between visiting new places, our jobs and our son’s school’ 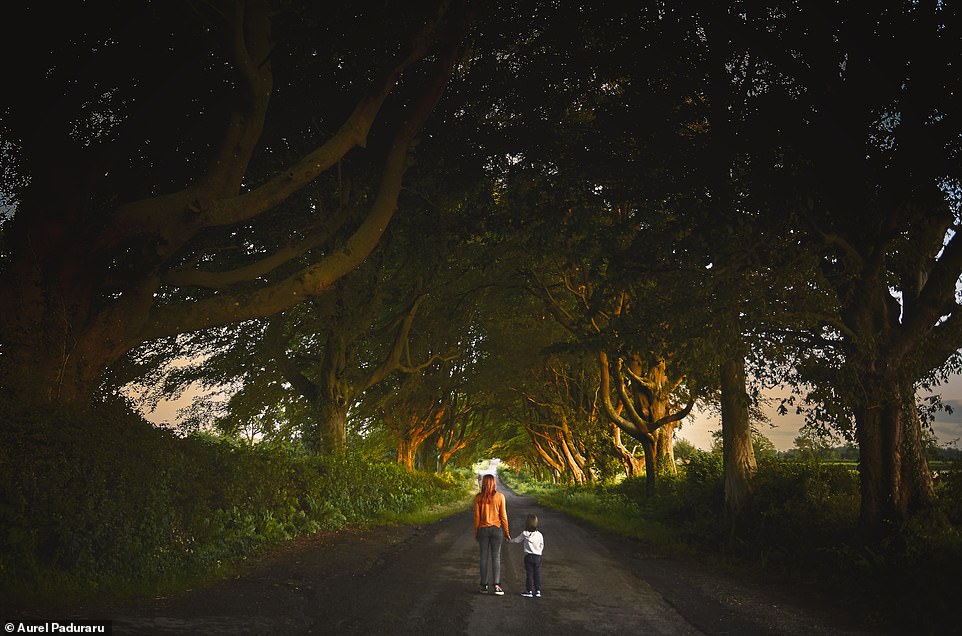 Aurel found this magical tree-lined road near Stourhead, a 1,072-hectare National Trust estate in Wiltshire. Aurel said: ‘I would love to have the opportunity to visit Scotland and the eastern part of England. So far we haven’t had enough time. These are such lovely places, with so many beautiful sights. I want to find time for trips there’