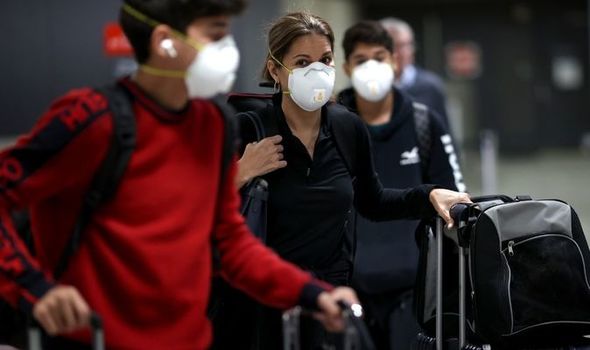 Many were forced to cancel their first overseas journey since the start of the pandemic, or pay extra to switch to destinations outside Switzerland. Angry holidaymakers and travel industry officials had slammed the announcement that British visitors must quarantine for 10 days.

The Swiss decision to impose lengthy isolation periods alongside proof of vaccination and a negative PCR test followed news that the new Omicron strain had reached the UK.

Thousands of skiers and snowboarders had been expecting to hit the slopes for the first time since 2019 after Covid had wiped out the last two seasons.

Many were winter sports fans and bound for Swiss resorts. But the 10-day quarantine rule from Saturday means they would have spent their entire holiday locked up in a hotel.

Jack Fitzgerald was forced to miss his easyJet flight to Geneva yesterday morning, even though he was travelling on to France.

He said: “We were advised they would only let you board the plane if you were a Swiss resident, and even then you would still need a PCR and 10 days of quarantine.

“One of our group went to Gatwick yesterday and easyJet advised they had taken some people off the flight yesterday morning.

“He then met the group, who were waiting for their luggage to be removed from the plane.”

She said: “I got this email the night before saying the Swiss government had changed the rules of entry.

“Then I checked it out and realised you had to quarantine. I can’t isolate. I would have spent my whole holiday in isolation.”

Fiona, from Finchley, north London, had paid about £1,800 for her weeklong trip with the Ski Club of Great Britain, and faced paying an extra £250 to switch flights.

“What a shambles of mixed messaging. Problem is, the damage is already done in many cases.”

“I realise this is a First World problem but it’s still making me sad.”

Ben Jones, 39, was planning to take his wife Rachel, 37, daughter Evie, 15, and son Alfie, 10, to see the Christmas markets in the Swiss city of Basel.

But the family saw their plans shattered by the Swiss government’s decision.

They will almost certainly have to cancel the £1,500 trip planned for December 17 and risk losing about £1,000 on flights and other nonrefundable charges.

Ben said: “I just feel it’s a big disappointment. We can’t go away because of a knee-jerk decision.

“We haven’t been abroad for a long time and were really looking forward to seeing the markets.

“Now we can’t do that because a government has a power to make that decision with no consideration for the people it affects.”

Ben, 39, from Gloucester, added: “We have done the Hyde ParkWinter Wonderland. But for me and the kids, that doesn’t compare with what they would experience abroad.”

The Rev Matthew Ross, a Church of Scotland Minister who works in Geneva, was caught out after visiting his family in Edinburgh for a few days.

“I think sensible testing regimes which have been proven to be effective could be introduced which would enable people to continue travelling in a safe environment.

“It’s disappointing that the Government does not reflect on the significant data that they have available.”

Watchdogs have been urged to monitor testing firms after a Which? probe showed that some were exploiting travellers arriving in the country.

Research showed nearly a quarter of private Covid test providers are charging £100 for the service.