As I walked among the trees on Perfect Day at CocoCay, Royal Caribbean International’s private island, it was apparent to me that it would take two days, if not three, to fully experience this place.

First, there was the Thrill Waterpark, home to a tower loaded with 13 waterslides, including the 135-foot-tall Daredevil’s Peak slide.

Then there was Chill Island beach with its quiet and appropriately relaxed vibe; volleyball courts and beach games at Breezy Bay; and the off-the-beaten-path South Beach.

Then there was the high-energy pool with a swim-up bar at Oasis Lagoon, not to mention the Coco Beach Club, which opened just before the pandemic in 2020, where I spotted a trio of eagle rays scoping out the overwater bungalows.

Needless to say, on a call during a three-night sailing on the Freedom of the Seas, there was no way I was going to experience it all. I gravitated to the sandy beaches at Chill Island, had lunch at the beach club, then a dip in the infinity pool, followed by a tram ride to South Beach before it was time to go.

As I walked toward the ship and passed the fiery red tower of the waterpark, I lamented that I never tried out the water slides. 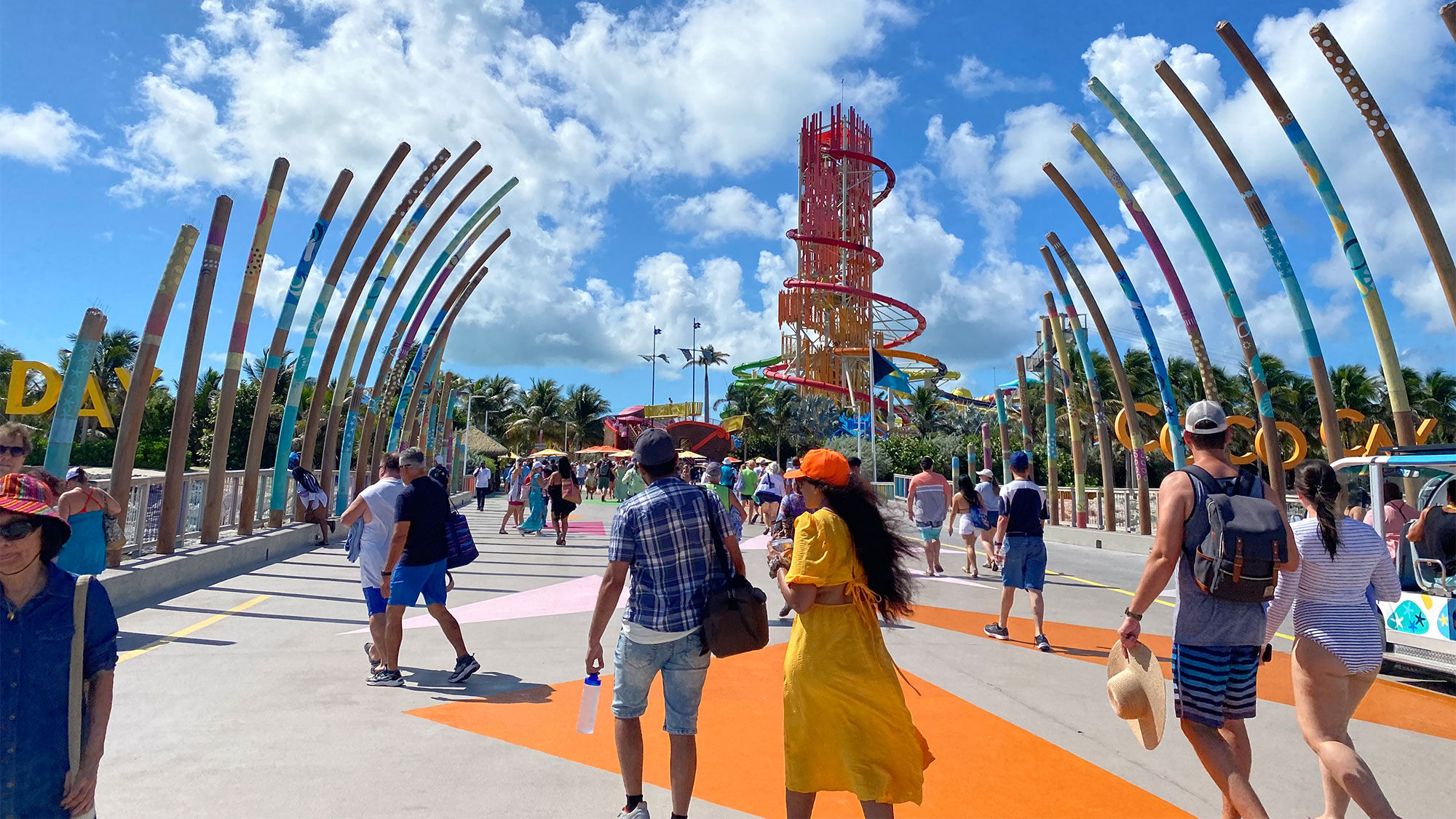 I imagine I’m not the only one who wrestles with FOMO, especially on short cruises. That may be what Royal Caribbean is counting on: Hoping guests have so many options on the island that they want to book another trip to try out what they missed.

But one of the Freedom’s new additions gave me a way to scratch that itch. The next day on the ship I gravitated to The Perfect Storm, a new set of enclosed racing water slides that twist around each other on the aft of Deck 13.

The Freedom underwent a $116 million renovation completed in March 2020, when the slides were added. Other outdoor changes included an expanded Caribbean poolscape with a freshened-up poolside bar, daybeds with rainbow-colored domes and a new kids’ aqua park called Splashaway Bay with grab-and-go food nearby.

I’ve become something of a slide aficionado. Two weeks earlier I was on the Norwegian Prima trying out The Drop, a dry slide that plunges riders down a dark tube at speeds supposedly rivaling an accelerating F1 race car. I had tested the slides on that ship incessantly and now consider myself an expert.

So I soberly stared up at the pair of racing slides that wind around each other before dumping their passengers into a splashy landing pad — and smiled as I imagined how fast I could slosh around inside.

The Freedom of the Seas’ Perfect Storm

I climbed the spiral staircase to the Perfect Storm to await my turn on the slide, and I found I had an open-air view of the Bahamas. As I got closer to the top, I could also view the ship’s surf simulator, and I watched as guests tried it out: some surfers had amazing skills, and others quickly wiped out. The people and island watching helped pass the time as I waited in line.

When it was my turn, I propelled myself down the dark blue slide as fast as I could then laid down and kept my arms crossed on my chest.

And of course I went more than once. The dark blue tube was my favorite. This tube is not so dark but lit with rings of light that I zoomed through as if I were traveling through a wormhole. The yellow tube was also fun but lacked the rings of light that brought the slide to the next level.

The slide attendant shared a pro tip with me: I should arch my back and press down on my heels and shoulders if I want to go faster. I did so and I could feel the rings of light zip by faster. At some point, I zoomed through a clear section of the slide and was struck by the light and view of the sky and palm trees in the distance. Then back into the ring-lit darkness I went, corkscrewing down and gaining speed until I slid into the wet landing.

Another pro tip: Plug your nose before you splash into the bottom.