Irish eyes are smiling on its culture capital: Why glorious Galway is the perfect getaway

Galway is the capital of Ireland’s wild Atlantic coast and is famous for its lively pubs, music and bohemian atmosphere. Now Ireland’s most westerly city has been crowned its Capital of Culture for 2020, making it one of the best places to visit for art and music this year.

Galway already has ten art galleries and 31 museums. And thanks to a £34 million budget, there will be something for every type of culture-lover, from actors reading Homer’s Odyssey on remote beaches to an exhibition of traditional tapestries.

There are daily events from now until next January and best of all, most are free. 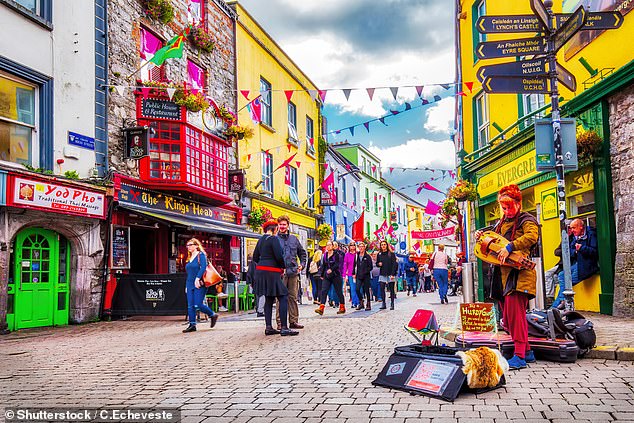 Galway is the capital of Ireland’s wild Atlantic coast and is famous for its lively pubs, music and bohemian atmosphere

Big public-funded arts programmes like this are always full of avant garde extremes, of course. In Galway, visitors to a wooden ‘ephemeral temple’ can ‘register their memories’, after which the site will be burned down. Thankfully, those with more conventional tastes have plenty to see too, including theatre premieres, open-air dances, poetry readings and a film festival. For music-lovers, there will be everything from bluegrass to a performance of Beethoven’s 9th Symphony in Galway Cathedral on December 12.

In September, more than 1,000 locals will help make a floating ‘city of lanterns’ in the harbour in a venture that sounds picturesque, if not quite fine art.

Visitors can’t help noticing the fierce River Corrib flowing through the middle of Galway. Its vigorous white-water forms one of the shortest (four miles) yet fastest rivers in Europe.

And the Corrib will host another ambitious spectacle in June. A group of 400 volunteers will attempt to break a world record by crossing its mouth on circus high wires over a period of 2,020 minutes.

Galway is a charming waterside city, with old cobbled streets and pretty, pastel-painted bars. Its shops are gloriously individual and quirky, such as Kenny’s gallery and bookshop (with 750,000 books for sale and local art on display), while many of its restaurants are highly rated. Two of them, Aniar and Loam, have Michelin stars.

For more fine-dining, try the Pullman Restaurant – two beautifully restored former dining cars that featured in Murder On The Orient Express are now located in the gardens of the Glenlo Abbey hotel. Don’t miss the Cleggan crab with toasted almonds, or pork with lovage meringue. 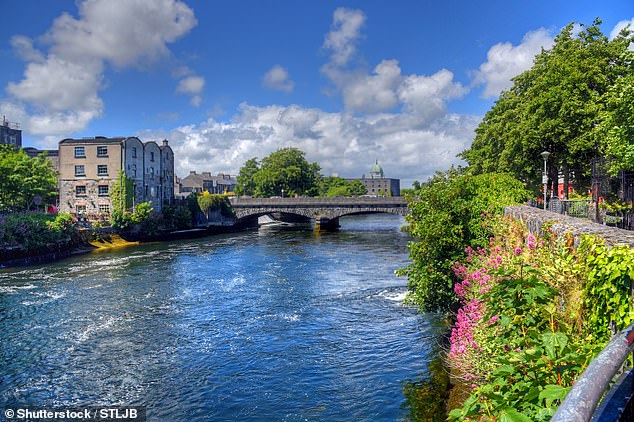 If you stay overnight at Glenlo, you’ll discover sumptuous bedrooms overlooking the gardens, golf course and the bay beyond. Double rooms on a B&B basis cost from £133 a night (glenloabbeyhotel.ie).

Galway also has a great cafe culture, including McCambridges, which has been a landmark for a century. Visitors can salivate over home-made soda bread, Aran Island seaweed pesto, and home-baked ham with beetroot mayo.

At the unpretentious Dockside Deli lining the harbour, you’ll find dishes such as Clarinbridge oysters and mussels, or chowder with seaweed bread. The deli is also the starting point for fishing trips – guests can eat what they catch once they return.

For a pint of slowly poured Guinness, nip into Keane’s Bar. The ivy-covered inn in a picturesque riverside spot has been run by the Keane family for more than 60 years.

Need somewhere to stay? The medieval 7 Cross Street (7crossstreet.com) has trendily designed rooms. The hotel is set on a cobbled street in the heart of Galway’s lively ‘Latin Quarter’ and double B&B rooms cost from £61 a night.

Alternatively, the Harbour Hotel (harbour.ie) is a smart, modern site with unfussy rooms, great views and a AA-rosette restaurant. Double B&B rooms cost from £74 a night.