A grand time in the Isles of Happiness: With highs of 24C well into November, bountiful beaches and a colourful capital, Gran Canaria is perfect for a winter break

Name’s got nothing whatever to do with birds,’ says the only other Englishman at the Grand Hotel Residencia, Maspalomas. He is clearly an authority on the Canary Islands.

‘Theo darling, you don’t know for sure,’ replies his wife, Annabel, busy FaceTiming her grandchildren back in Wiltshire. Her skin is the colour of teak.

‘Yes, I do. Mistranslation of Pliny. He was writing about sea lions. Canis. Canaries. Dogs, d’you see?’ And Theo returns to his crossword puzzle. 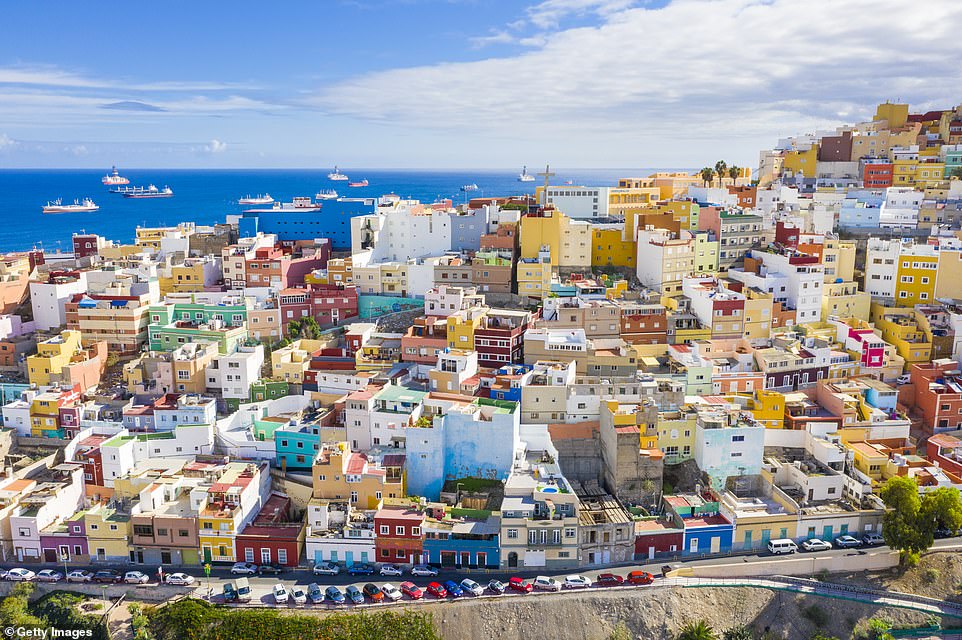 The Isles of Happiness, the Romans called them. Dogs, sealions, whatever, the Canary Islands marked the end of their known world. A penal colony, yes, but a very long time ago.

Some 60 miles off the coast of Africa, this unlikely volcanic archipelago — there’s a volcano erupting on the island of La Palma right now — has remained one winter escape still legitimately accessible. A low Covid rate, and rigorous monitoring, have spared the worst.

You can come here. You should.

Scraping at the unforgiving soil, Antonio the hotel gardener conjures miracles from black gravel. ‘Ah, but is absorbent. Releases water slow-slowly.’ He is proud to enjoy what meteorologists deem ‘the best climate in the world’. Tempered by the trade winds, the year-round sunshine keeps the thermometer in the constant, dry mid-20s (or mid-70s in old money).

The Grand Residencia is Gran Canaria’s only five-star seaside hotel that remained open during the pandemic. Owned by wealthy Germans, it stands discreetly in Antonio’s dramatic garden of palm trees (symbol of the Canary Islands) and tall and spiky candelabra cactus.

Beautiful by day or night, it sets a gold standard in heedless luxury. Bedroom suites are generous, their private terraces overlooking the dazzling pool, and with whirlpool baths which at the press of a button burst into a giddy underwater light show. The parrot-prints are no interior designer’s cliche, not when macaws and parakeets are shrieking outside. 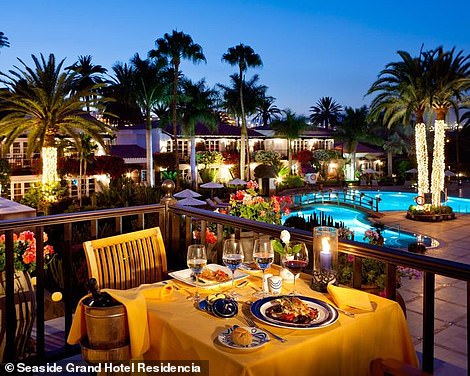 The Seaside Grand Hotel Residencia (pictured above) ‘sets a gold standard in heedless luxury’, according to Kit

My guide, the vivacious Maria, is a Jane Austen fan. She says that the British were coming to the island long before the 1970s — 19th-century doctors recommended wintering here, establishing tourism much as we did at Nice and St Moritz. ‘You gave us Spanglish. Our word for cake is queque, and for potatoes, quinegua. Quinegua, King Edward: did you get it?’

In 1891, the British were kind enough to endow Gran Canaria with golf, and although locals derided the English game of football, it is now central to their culture. Both Antonio and I support Norwich. Canaries. Of course.

Maria and I imagine poke-bonneted Englishwomen tripping along the cobblestones of Las Palmas, the island’s lovely old Spanish colonial capital. Whole streets of fine 19th-century architecture are enlivened by balconies of carved Canarian pine, the fire-resistant, triple-needled species from the island’s high-peaked centre known as ‘milker of the clouds’ for its rain-making abilities.

Late-Victorian British merchants were here in such numbers that Alfonso XIII — whose predecessors had ruled the islands since Spain’s 15th-century conquest — became concerned that Britain had quietly added Gran Canaria to her own empire. He arrived to see what was going on. Legend has it that the contract-awarding mayor was having a scandalous affair with the madame of the local brothel. She successfully distracted His Majesty, who departed none the wiser.

The smart yellow hotel in which the king dallied is still there in the Old Town. Next door, beside a pretty opera house, stands the monastery of St Francis. ‘From there,’ says Maria, ‘the first banana was exported to the Caribbean. Yes, it was that way round. It was a Far Eastern fruit.’ 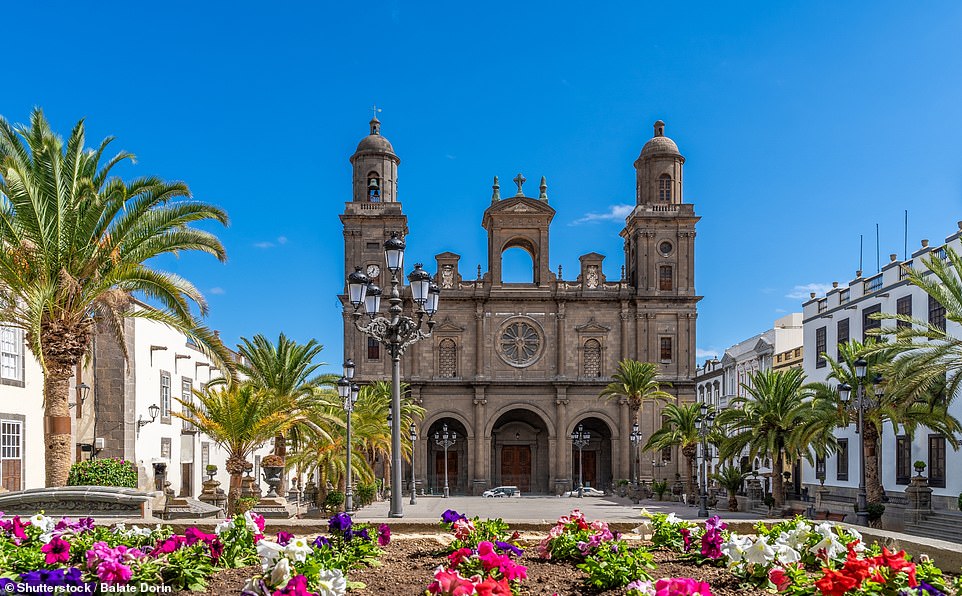 Kit reveals that the cathedral of Santa Ana, pictured above, ‘presides serenely over a square as decorous as any in Bath’ 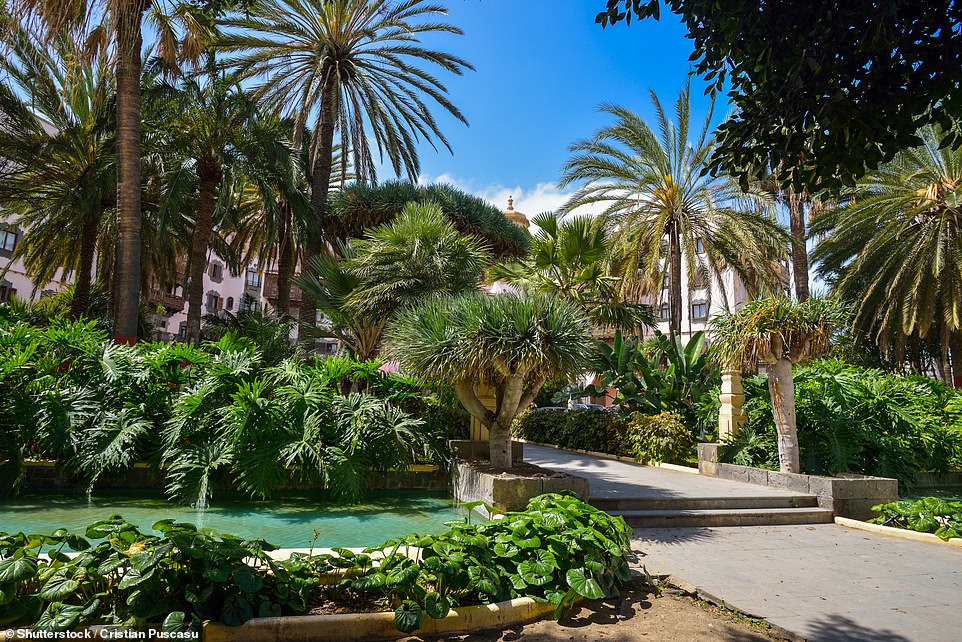 KNOW BEFORE YOU GO

The original port, dangerous and malodorous, was replaced by a public garden, Doramas Park, where now stands a heartbreaking monument to the island’s aboriginal Berbers. Targets for slave traders from Roman times onwards, they would leap into the Bandama, the huge dormant volcanic crater, rather than endure captivity.

The neoclassical front of Santa Ana, the island’s cathedral, presides serenely over a square as decorous as any in Bath. Behind it, Columbus’s House is stone-flagged, with a cool internal patio and absorbing exhibition galleries. For Columbus, the Canaries were a departure point for the New World. His fleet is said to have taken on fresh water from La Charca de Maspalomas, the southern lagoon, as still do the flocks of collared doves embarking upon their own migrations. (Maspalomas, as I’m sure Theo knows, means ‘more doves’).

Now a protected reserve, the lagoon marks the entrance to the stupendous golden dunes which extend for three miles across to Playa del Ingles.

On the candlelit balcony beside the lagoon, the gourmet dinner served nightly at the Grand Residencia is of a standard seemingly impossible on a remote island. German dishes — apfelstrudel and prinzregententorte — sit curiously beside the exquisitely presented native fare. Try the local catches; barbecued stone bass, langostino souffle, or the speckle-skinned corvina: not some unholy hybrid of Covid and corona, but a sweet-fleshed fish reminiscent in flavour of turbot.

There are imported German wines, but the local wines, sniffed at by some for their igneous tang, are better value: Gran Mogaren Valsequillo quaffed perfectly.

Local cheeses tend to be of goat or ewes’ milk. Neighbouring Fuerteventura produces a mild and creamy variety which, together with cumin-stuffed courgettes, reminds one that Morocco is just beyond the horizon.

By day, guests soak up the sun around the pool, their every whim attended by silent staff. A few Germans venture to the nearby beach, to play canasta in the nude. They are so sunburned as to resemble the Mulberry overnight bags in the duty-free malls around the Faro: the lighthouse at the end of the world. What I love best is the spa complex, exclusive to hotel guests. A thermal mineral pool shoots jets of bubbles around sightseers’ weary limbs.

Gran Canaria is back in business. At the marketplace in Las Palmas, Jose’s tapas bar Piscos & Buches is open again for cochino negro (black pig) and queso con marmaladia (cheese with pimento jam).

The great agave-stalks are being cut as Christmas trees. On Las Palmas beach, the vast, sand-sculptured crib is under preparation: the only concern being politically correct responses to the figure of Joseph. Last year, tuts Maria, he attracted disapproval for not doing his fair share of changing Baby Jesus’s nappies.

Composer Camille Saint-Saens, whose statue guards the Old Town, came here incognito from Paris to escape personal tribulations. Hearing a grand piano played from a Belle Epoch balcony, he fell under the spell of its player, Dona Candelaria, and wrote for her the Valse Canariote. Leonard Bernstein, it is said, composed much of West Side Story while on the island.

I, too, am a musician. After dinner, over a glass of guajiro — the local honey-rum liqueur — I find the Canarian folk-singing of Nolle Ortega inexpressibly moving. Despite having to sing through a face mask, her sweet, pure soprano, accompanied by the five-string timple — a local form of ukulele — comforts me hugely. ‘Even caged,’ she says, her eyes smiling, ‘the canary will go on singing.’

My budget won’t stretch to another week at the Grand Residencia, but surely I can jump a few balconies? So, Playa del Ingles, you’d better get this party started. I’m staying on in the Isles of Happiness.