Manna from heaven: Nowhere in America compares to Savannah – with its garden squares, old-school hospitality and scrumptious pecan pies

Right now, Cheryl at the Back In The Day bakery is taking orders for her Thanksgiving pies. There are three types — apple, bourbon pecan or spiced pumpkin — and everyone in Savannah wants one.

At her famed bakery and cafe in this historic southern city, Cheryl is famed for the lightness of her crust and traditional baking. Folks queue for her banana pie, peach queen of tarts and cornbread.

Perhaps most celebrated are her biscuits made by the hundred every day. There is no equivalent to this southern staple in British cuisine; the nearest is a savoury scone, but it’s not even close. 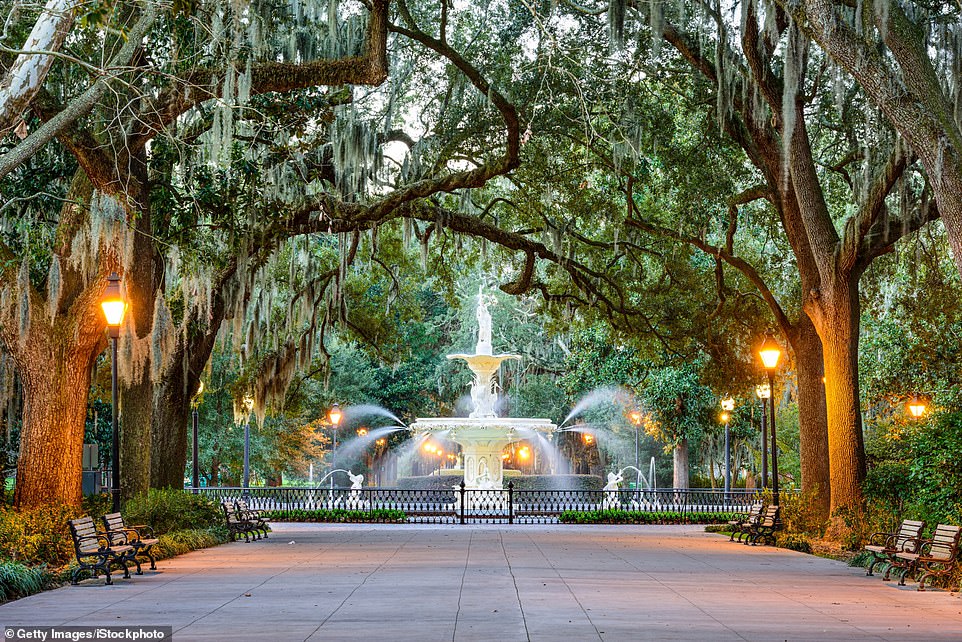 Elegant: The Forsyth Park fountain is one of the most visited attractions by visitors to Savannah

‘Biscuits are the croissants of the South,’ explains Cheryl. ‘They’re more complicated than you think, and they keep me busy every day.’

People eat them at all meals, with a main course, slathered with pepper jelly as a snack, crammed with bacon and eggs for breakfast. I like them best with a slice of Cheryl’s cheese casserole, something so delicious I had to buy a copy of her recipe book to learn how to do it. It is a slice of casual genius, like so much of Savannah.

This great antebellum city is the oldest in the state of Georgia. Some 100 miles to the north, its big sister Charleston gets all the plaudits for being a foodie and tourist destination, but I would argue Savannah has so much more to offer.

It is slow, sophisticated, friendly and unlike anywhere else in the world. Its historic centre is laid out in 22 garden squares, each with its own identity. Oglethorpe Square is named after the British general who founded Georgia in 1732, a statue of John Wesley stands in Reynolds Square, and the famous Forrest Gump bus bench is in Chippewa Square. 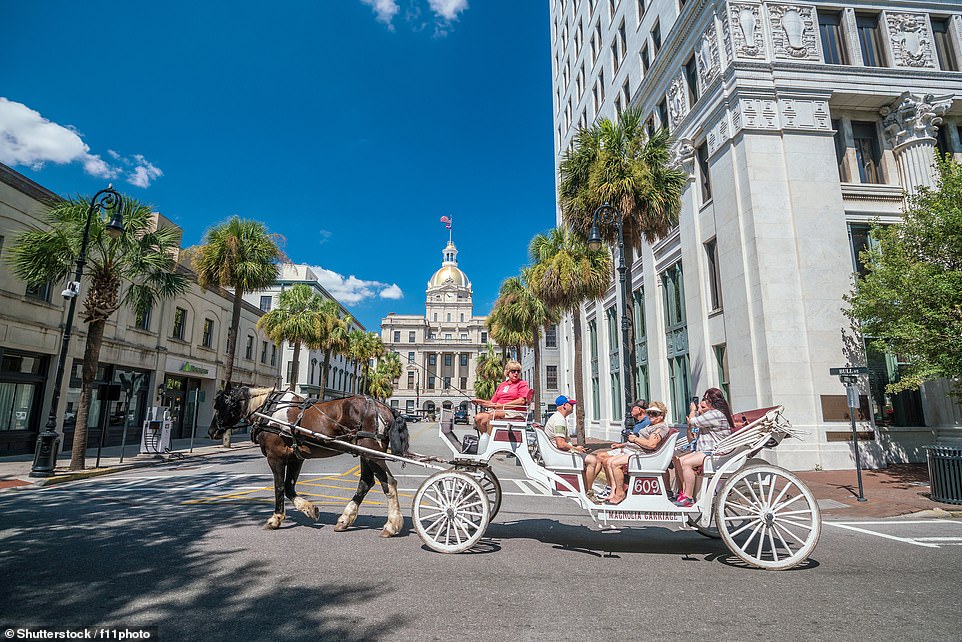 The city is ‘slow, sophisticated, friendly and unlike anywhere else in the world,’ says the Daily Mail’s Jan Moir. Pictured is  carriage ride downtown 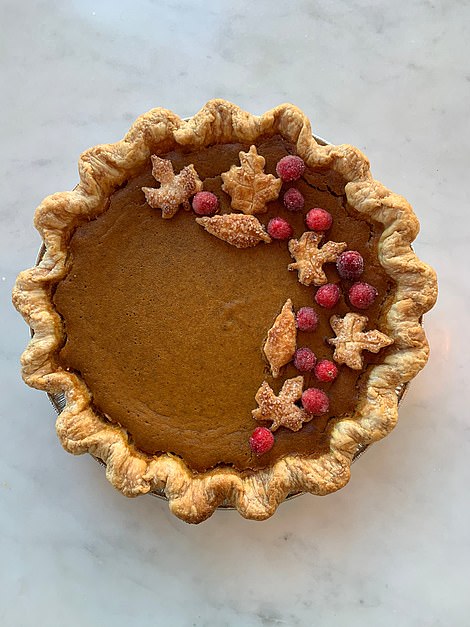 The Back In The Day bakery is a popular spot for buying Thanksgiving pies, such as spiced pumpkin (above)

Azaleas and roses bloom prettily, but the stars are the live oaks draped in Spanish moss. It’s as if a set dresser is sent out every night armed with bales of moss and instructions to make the city look even more gothic and beautiful.

The trees also provide welcome shade in summer, when temperatures are ferocious. Indeed, the heat is one reason why the dog litter bins are buried in the ground in the squares; press a pedal and a little hatch opens, where you pop in your poop bag. You probably didn’t come here to read this, but it is the kind of detail I like.

My friend Bea and I are staying at the lovely Perry Lane Hotel, sharing a twin room with two queen beds with crisp linens and a marble bathroom stocked with Byredo toiletries. ‘Byredo!’ we squeak, thrilled.

The hip and elegant hotel has a rooftop bar with views over the city and the river, a terrific restaurant and cosy sofas in nooks where you can order an iced coffee or a doughnut flight: three types of nuts served with pots of salted caramel and chocolate sauce.

The Savannah Theatre is around the corner, one of the oldest in America. Oscar Wilde appeared there and when we visit, Menopause The Musical is playing. If you think we don’t take a million pictures of each other posing by the neon Menopause sign, you would be completely wrong.

How we love Savannah! We spend happy afternoons antiquing, as the Americans say, often in Two Women And A Warehouse. Sometimes we drive to the marshes in the tidewater zone around the city; perhaps to have lunch on one of the islets with their quaint names. One sunny day we drink rosé on the Isle of Hope which, as Bea says, kind of sums up our lives.

Even if visiting a graveyard is not high on your holiday list, the 160-acre Victorian-style Bonaventure Cemetery is unmissable. Set high on a bluff overlooking the Wilmington River east of Savannah, it is so hauntingly beautiful it almost makes a girl wish she were dead. 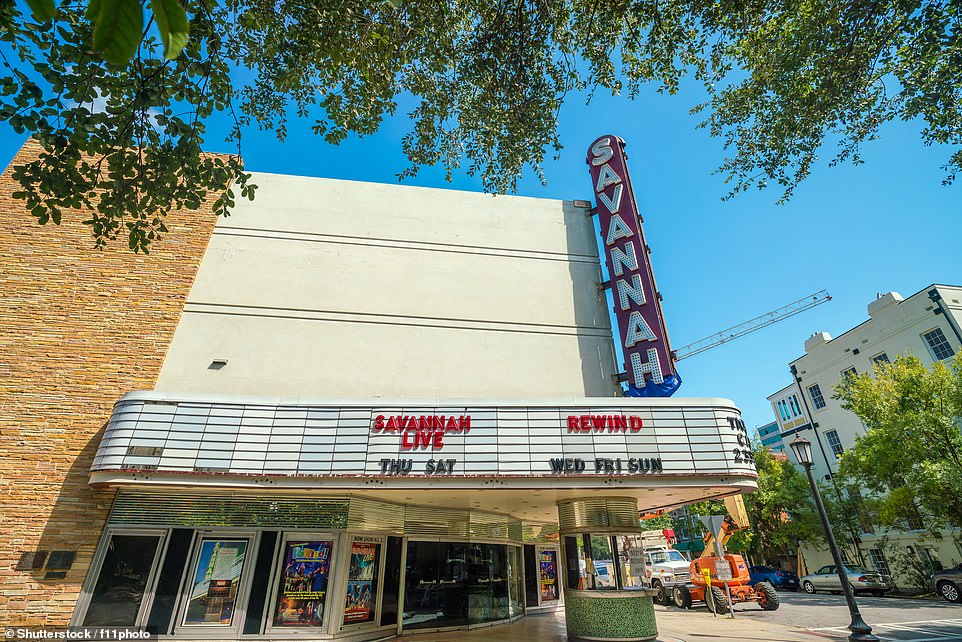 The Savannah Theatre is one of the oldest in America and has hosted some notable performers, including Oscar Wilde

There are avenues of grand old oaks, while the light bouncing off the river on to the white marble tombs makes the place throb with southern gothic atmosphere. I’ve wanted to come here since reading about it in John Berendt’s Midnight In The Garden Of Good And Evil, a lightly fictionalised true crime story about a local man tried four times for one murder.

I’m not alone. Since its publication in 1994, tourist numbers have taken off.

Local hero Johnny Mercer is buried here, the man who wrote many songs in the American songbook. He specified a marble bench on his grave, so people could sit and enjoy views over the waterway that inspired one of his hits, Moon River. 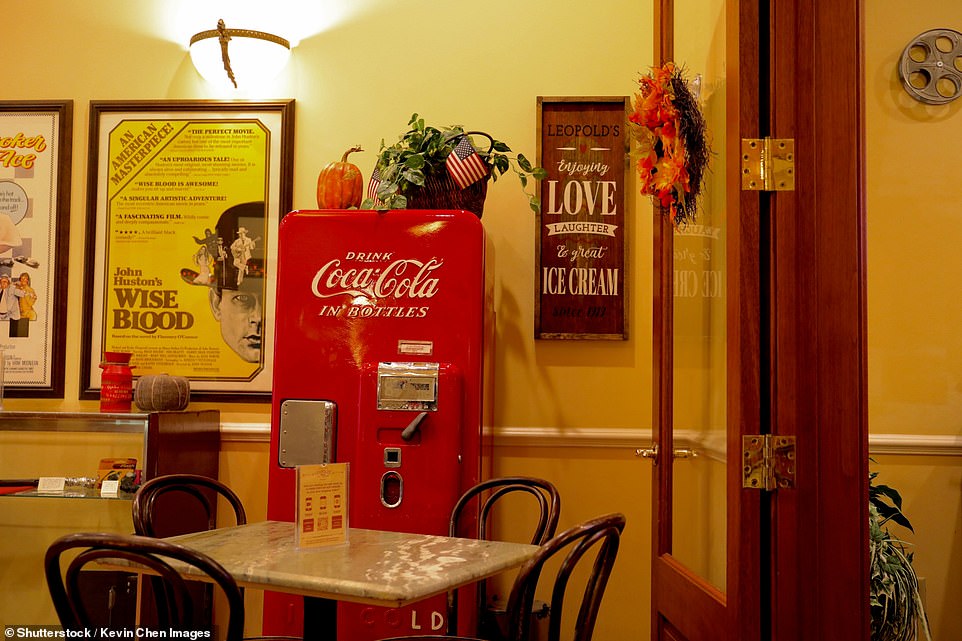 BA (ba.com) London to Atlanta from £758 return, Savannah is then a four-hour drive. Doubles at the Perry Lane Hotel (perrylanehotel.com) from £189 (visitsavannah.com).

From the Perry we can walk almost everywhere downtown. On hot days we take refuge in Leopold’s, an ice-cream shop almost unchanged since its 1919 opening and where the tutti frutti flavour was invented. In the evenings we pop into the Artillery bar. Customers are informed that no flip flops, tank tops, bombs, shots or Budweisers are allowed.

We are in the South, and standards must be kept up. I love that strictness, and the bar’s ‘minitinis’ — a half martini, for a little lift. It is so civilised.

There are many good restaurants in Savannah, but my favourite is The Grey, set in a converted 1930s Greyhound bus station on the edge of town.

Its Streamline Moderne exterior is intact and inside, chef Mashama Bailey blends her Georgia roots and New York upbringing in dishes such as turnip bisque, roast quail, and red pea pancakes with cracklin’. The bus station was once segregated, like most of the South. It seems a triumph against the sins of the past that Mashama, a black woman, is now in charge.

The region’s difficult history cannot be ignored and these days, no one tries. Ten miles south of Savannah is the Wormsloe Plantation, where visitors gasp at the 1.5-mile avenue of oak trees, but wince at an estate that once used slaves to tend the rice and corn crops.

Back in central Savannah, the First African Baptist Church is still a place of worship, but is most notable for being where escaping slaves were hidden on their perilous flight to freedom and the North. There was hope, even then. And is something else that makes this place so special.